The tide is high but I’m holding on

The recent New Game+ update for Overcooked 2 that added an unlockable fourth star on every level was a nice gesture for high-score chasers, and I’m still working my way through the lot. But, above all, I just wanted more kitchens. That’s always been my favorite part: working out the most efficient way to get ingredients where they need to be on time without driving my teammate absolutely mad.

It’s all part of the Overcooked process. You mess up. Your partner messes up. Everybody messes up! Then the healing process can begin. You come back into the level feeling like you finally have a grasp on what’s required of you; now you just need to execute the plan without ever letting up or hesitating.

If you felt Overcooked 2 fell a bit on the easy side, you’ll appreciate the immediate challenge found in the new Surf ‘n’ Turf levels. There are 12 main kitchens to master. They might seem straightforward — how hard can it be to blend smoothies or grill some kebabs? — but they can be real ego-bruisers. 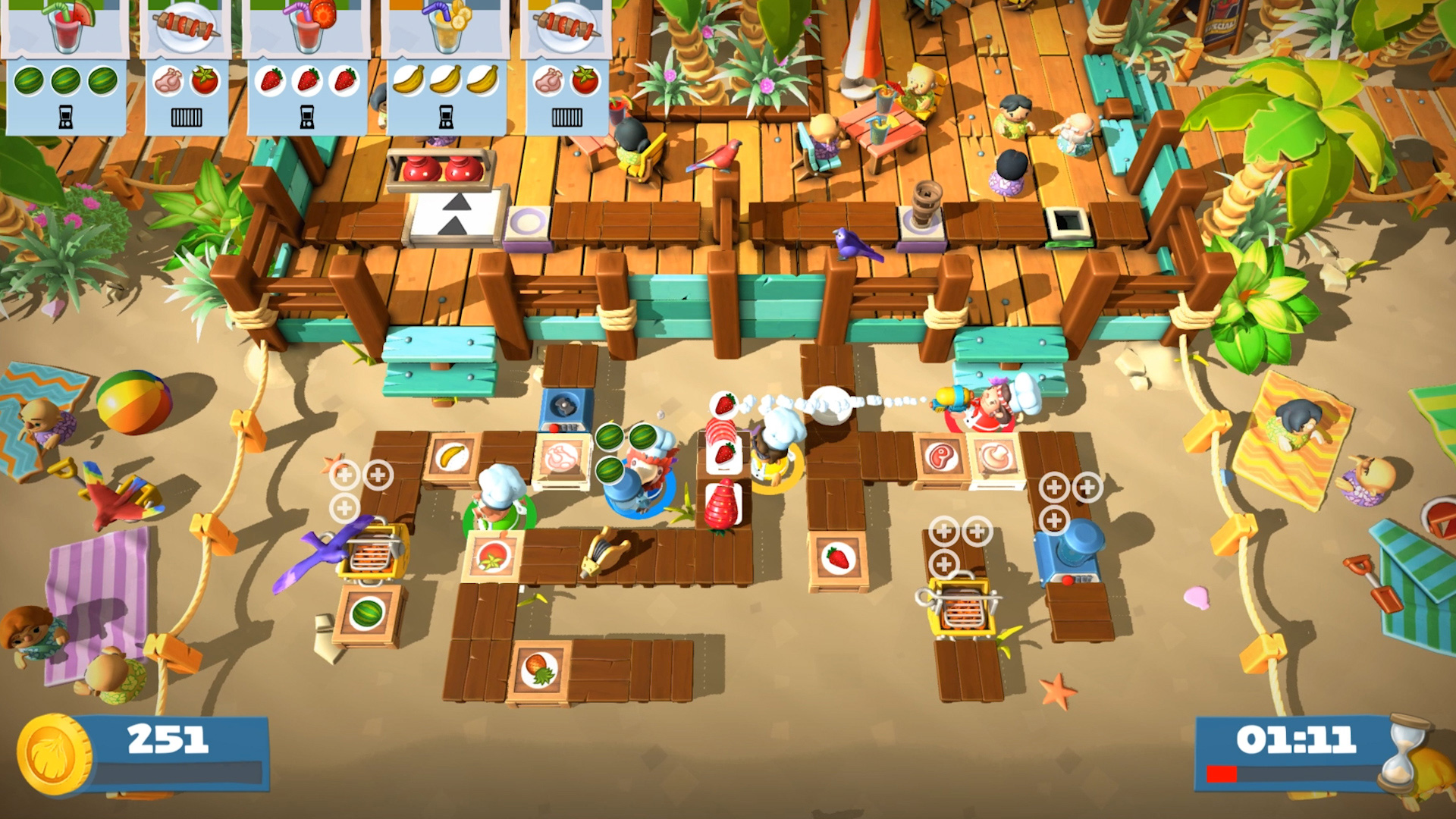 Surf ‘n’ Turf takes place in its own tropical hub world with a separate save file, much like the DLC for the original Overcooked. It’s structured the same as the core game, albeit with the expectation that you’re well-versed in the art of cooperative cooking. Straight up: I’ve yet to three-star the first level.

I initially hoped to see more new recipes, but by the end, it wasn’t an issue. The beach- and pool-themed levels are among the best in Overcooked 2. They make far better use of the joystick-controlled platforms that often bugged me in the main game, and as tough as it can be to pass these levels with high marks, they aren’t frustrating. Most kitchens are compact with relatively simple orders to fill, but limited counter space and maneuverability means you can’t waste any precious space.

The true challenge is moving efficiently and always communicating with your partner(s). That was true before, and it’s even more critical here in Surf ‘n’ Turf. I’m glad I wasn’t able to breeze through it.

As a wrinkle to the usual proceedings, you now have access to a water gun for cleaning dishes and/or putting out fires. There’s also air-blasting bellows that can very temporarily heat up barbecues for a faster kebab cook time. These tools can easily be misplaced, reinforcing the importance of constant verbal check-ins with your co-chef. Unlike the fire extinguisher (on most levels), they feel mandatory.

In terms of recipes, Surf ‘n’ Turf doesn’t present anything too complicated. You have strawberries, bananas, watermelons, and pineapples for various smoothie combinations. Sometimes customers can throw you off your rhythm by requesting a double-patty burger. Kebabs use familiar Overcooked ingredients, but to finish the orders in time, someone will need to babysit them with the bellows.

All told, Surf ‘n’ Turf is a great little expansion, perfect for Overcooked 2 fans who want to feel more challenged. I was worried it was going to be too short or too similar, but none of those fears panned out. The levels are tightly designed and genuinely satisfying to solve. This DLC is peak Overcooked.