If Ghost Town Games keeps the hits coming, I’ll keep turning up. Overcooked 2 was already a co-op staple in this household, but with continued support through patches and DLC in recent months, the lovingly hectic cooking game has risen to greater heights. I want seconds. Maybe even thirds!

The latest DLC pack – and the first to be included in the Overcooked 2 season pass – is Campfire Cook Off. We aren’t sure what to expect from the other two upcoming add-ons, but if this one is any indication, the pass will be worth it for everyone who wants more excuses to bust this game out. 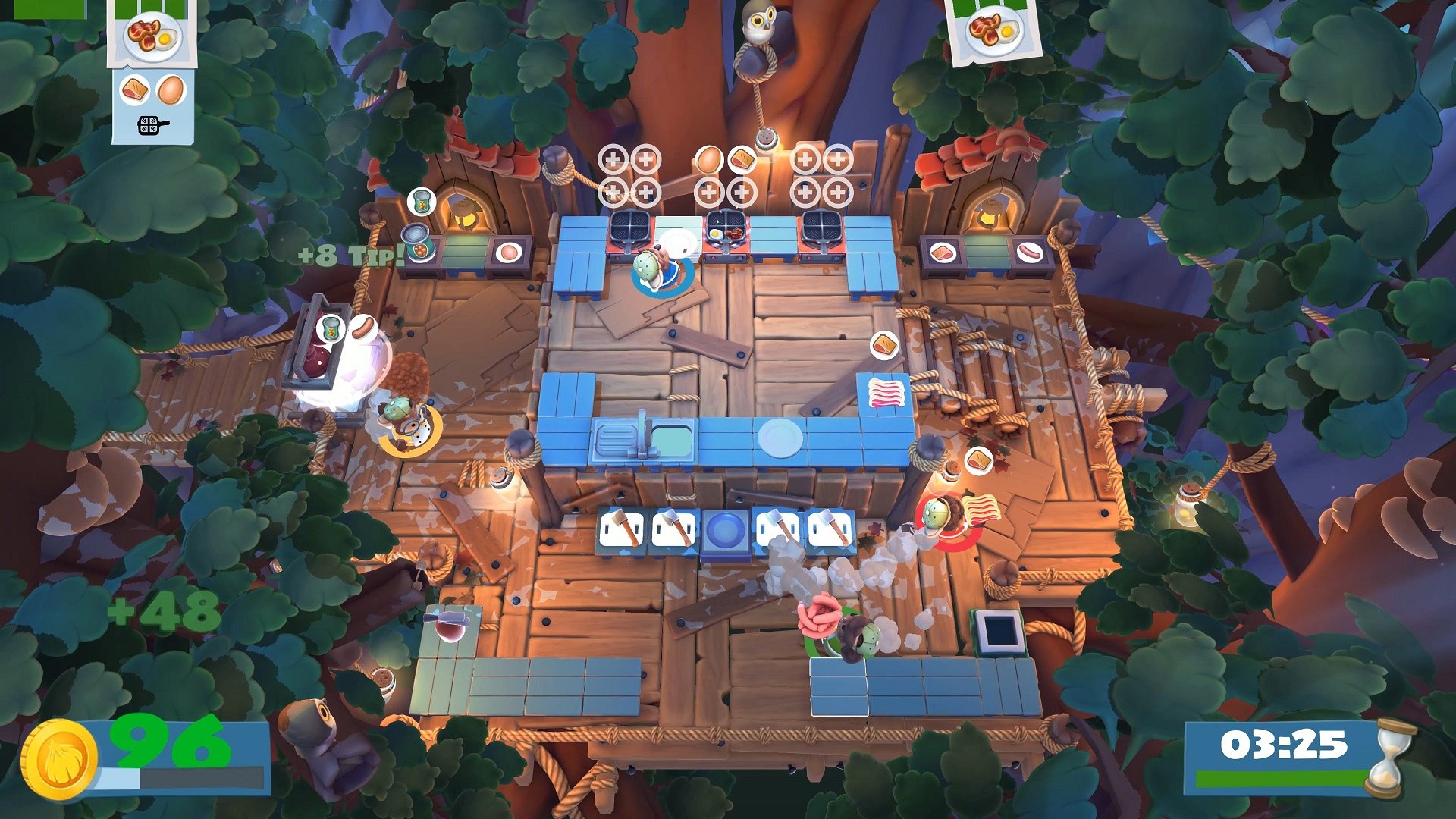 At this point, you should know what you’re getting into with Overcooked 2 DLC. It’s best enjoyed after you’ve cleared the main game and you’re mostly on the same wavelength as your co-op partner(s), but there’s nothing holding you back from jumping right into the new levels. Similar to Surf ‘n’ Turf, the last big DLC release, Campfire Cook Off takes place in its own separate hub world with its own save file.

The developers have latched onto the notion that a handful of new kitchens and a couple of fresh recipes in a themed locale aren’t quite enough. There needs to be an extra something to throw us off and get us hollering. We know Overcooked too well. With Campfire Cook Off, the answer is backpacks.

Some but not all of the 15 new levels (three of which are secret Kevin stages) involve strapping on backpacks that hold infinite ingredients just like the normal food boxes. This might sound like a small change, but it can have a wide impact on your flow. For instance: Say you’re trying to roast s’mores and your partner has a backpack containing the level’s only marshmallows. They won’t stop darting around and now it’s all your fault because you didn’t chop enough wood to keep the fires going so the orders are out of whack and okay, fine, we’ll restart for the third time in a row. Overcooked 2 rules.

The other main recipe is a hearty breakfast with eggs, beans, sausages, and bacon, though Campfire Cook Off also tweaks existing meals like pancakes and pizza. The main trick isn’t so much assembling the correct ingredients as it is finding perfect harmony and prioritizing your duties. I can’t tell you how many times everything fell apart because I couldn’t juggle easy-to-neglect jobs like dishwashing and wood chopping. The level designs are especially devious in this excursion, oftentimes splitting partners up or routing them in such a way that constant communication and check-ins become mandatory.

Out of the whole lot, there was one level I didn’t care for design-wise (a tiny secret stage littered with portals) and another that proved too frustrating (the final level, which wipes the field multiple times). That said, the difficulty curve felt spot-on overall. You can expect to squeak through most of the stages in one sitting and spend one or two more sessions mopping up your remaining three-star goals.

If you had to pick out a single Overcooked 2 DLC, Campfire Cook Off would be my recommendation without hesitation. It adds depth to the usual proceedings without going overboard on complexity, and the clever new backpack mechanic encourages even deeper teamwork. You can’t go wrong.