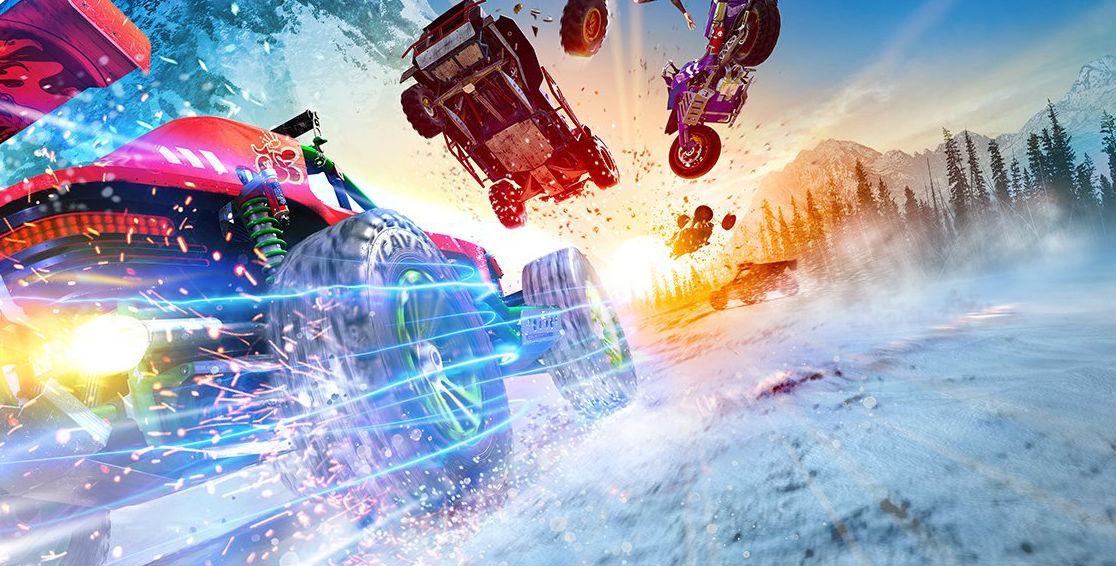 I miss the feeling of booting up silly arcade racers. The on-demand wheelies from the Cruis’n series, the larger-than-life tracks from San Francisco Rush — they weren’t just a big part of my childhood, they were swift moments of escapist entertainment, far from the realm of the generally sim-heavy genre.

OnRush brings that mentality back with a simple focus on driving, boosting, and not-really-braking.

It’s a big responsibility to be the herald of arcade racers, as many before OnRush have tried, and fallen. Bizarre Creations, a team that could be considered royalty in the realm of racing, was obliterated after Blur hit the market, and many more studios have fallen after gambling its reputation on the subgenre. Based on the last three weeks I’ve spent playing Onrush though, I think it’s going to be just fine.

The gist of OnRush is pitting two teams of racers against one another as they attempt to complete specific sets of objectives (read: there’s no straight “racing” gametype) and smash each other to bits, Demolition Derby style. As I’ve said before, OnRush‘s rubber band system actually makes sense, which in theory unites both casual and hardcore players together in “the stampede.” It’s just like it sounds: players congregate together in a pack, and if you stray too far behind you’ll warp back to the pack in a sort of respawning motion. This isn’t a cross-country racer with traditional lap-based tracks, instead you’re going to be experiencing FPS-esque modes like King of the Hill and Team Deathmatch.

More specifically you have Countdown (earn score by hitting gates and prolonging your death timer), Overdrive (boost as often as you can), Switch (take down enemies and shift vehicles as you die), and Lockdown (king of the hill with moving zones). OnRush‘s 12 tracks help diversify all of these gametypes in the sense that you shouldn’t get too bored too quickly, but a few of them suffer from a lack of clear direction and a rewarding feedback loop.

Lockdown is the clear winner, and likely the prized creation of the team, as nearly every track is built around it. Anyone from anywhere around the world can jump into Lockdown and understand what it’s all about, as players from each team clamor to capture those moving points, slamming foes out of the way in the process. It also provides one of the highest skill ceilings in the game since you’re constantly trying to navigate and parse the “hill,” forcing fancy foot (wheel) work around walls and through needle point turns.

Countdown is a little more abstract, but nonetheless leads to some of the more exciting moments during my sessions with OnRush. As the match progresses the ticking clock for each team gets quicker and quicker, and hitting each gate to survive a round is less of a suggestion and more of a requirement. Getting that last half a second win because you nudged someone out of the way of a gate and hit one yourself is satisfying.

Overdrive, by comparison, is a lot less exciting and feels kind of shoved in there for good measure. Switch initially enamored me during the beta test but slowly fell out of favor as I played more of the other available gametypes. While the concept of swapping cars after death was neat at first, it just feels more aimless than the rest and less personal. OnRush works best when it feels like you’re contributing to a team, and Switch is framed more as a free-for-all situation that would probably work best as just that — a separate free-for-all mode.

I had the chance to test out both a pre-release and retail build of OnRush online extensively, and we’ll be reporting on the status of the game’s servers if there are any issues after launch. During the former sessions I had significant lag issues and dropped games, but playing with the latter build I didn’t encounter anything of the sort. One thing to note, and it doesn’t impact this review as it deals with speculation — you need big games if you want to play online.

Even with the addition of NPC fodder cars smaller online matches can feel like ghost towns, curbing the amount of boost you’ll earn in any given round and thus, significantly slowing down the general feel of just about every facet of OnRush. I’m not sure how Codemasters intends to keep people interested, but they’ll need to do something to ensure that matches are always full.

Oh, and just in case it bothers you, there are useless loot boxes that unlock cosmetics. While the system, now stuffed into just about every game imaginable is a turn off, cosmetics for a racer feel far less pertinent and personal as you’re constantly rushing past them. I went through a large portion of the game not even realizing that you could change your racer or racing stripes, or that it even mattered at all. The addition of loot is also completely balanced out by a full-on arcade-oriented single-player portion, which is all too rare these days.

Onrush could use some refinement when it comes to its modes but its core is strong, and the foundation is set for a great arcade racer. I’m anxious to see how it evolves and if people will really pick up on the class-based system enough to explore it past the first few weeks of launch, but for now I’m happy boosting off of a cliff and doing sweet flips on a motorcycle to earn points.