Sometimes you just want to slash people in half and use no more than a couple buttons to do it. Reminiscent of games like Strider, Ninja Gaiden, and Shatterhand, Oniken is a brutal and brutally difficult 8-bit platformer that isn’t for the meek.

Games of its style have been common as of late, but none feel as authentic as Oniken. For better and worse, one could easily mistake Oniken for a lost Nintendo game by Nastume or Tecmo.

Call it indie if you like, but teams of two to three people were commonplace during Nintendo game development. Some did great things within the action-platformer genre, of which Oniken belongs. What we now see as limitations of hardware, they saw as a framework to build within. With 56 colors, a goofy-sounding synth, and four buttons, a few talented designers made games that continue to entertain us many years later. Oniken aspires to be in their company, even if it’s from a different era and on a different platform.

As an outsider, simplicity and difficulty appear to be the two main design philosophies of Oniken. We’ll talk about the former, before my blood starts boiling at the thought of the game’s bosses. Designed with a gamepad in mind (Xbox 360 controller does just fine), Oniken centers around one mercenary ninja’s ability to jump and slash dystopian future jerks. Zuku, the game’s protagonist, isn’t as fluid and fun to control as Strider Hiryu, but his sword has a nice reach. You can extend that reach by collecting power-ups. However, you can easily lose these upgrades by taking damage. If it isn’t clear by now, Oniken loves to punish the player for making dumb mistakes. 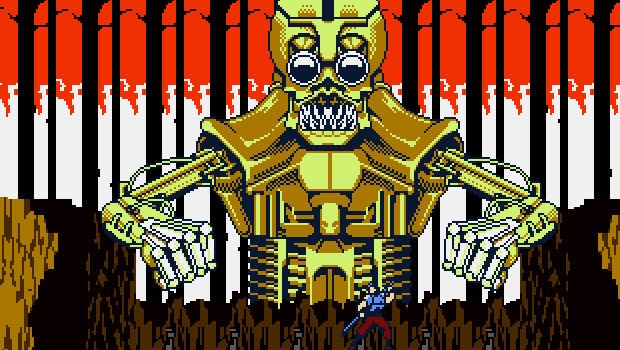 Luckily, Zuku has a couple of extra tricks up his sleeve. In addition to extending attack reach, Zuku can sacrifice his power-up in order to go into berserk mode, where he deals more damage and takes less. Just as the power-ups render deadly enemies harmless, berserk mode can turn some of the game’s most difficult bosses into a 15-second slashfest. Only the most masochist old-school players will complain about these cheap victories, because even when you do manage to berserk a boss, you likely have died from him many times before — if not during the long trek to his room.

And finally, there are grenades. These are used much like items in Castlevania: awkwardly hold up and press attack to throw in an arch. Unlike Castlevania, this is the only item you’ll have which is pretty disappointing. You get used to jumping and throwing grenades, but it never feels quite right. This is one of many instances of how Oniken’s earnestness to emulate Nintendo games disservices the overall experience. We put more buttons on a controller for a reason, so use them!

Oniken packs a lot of variety and creativity in its six levels which contain three areas each. Sometimes you’ll be platforming across conveyor belts with lava beneath — oh, evil ninja military, why are you so silly? — while other times you’ll be force feeding grenades to a cybernetic polar bear while jumping spikes on a speeder bike. One area you will find consistency in, however, are Oniken’s tough-as-nails boss fights that demand you to quickly recognize an enemy pattern and stay the hell away from projectiles. 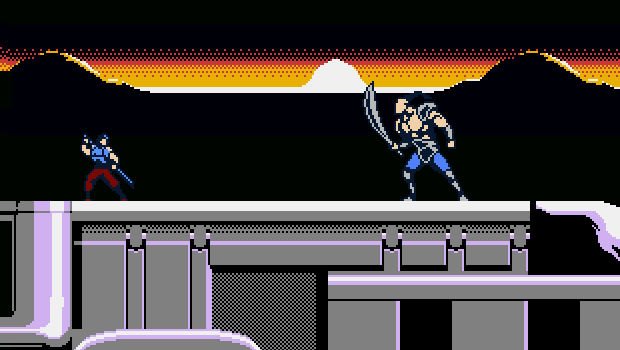 Most of the time, these boss encounters (most levels have two) are a fun challenge, but a couple will frustrate in a way that is neither fair nor entertaining. One such boss is a snake that breathes fire down on you if you attack it. Not taking damage is a matter of endurance and luck. This boss is followed by an even more maddening boss: A robot you must fight from a small, moving platform — fall off and it’s instant death. Until you recognize the specific attack pattern and necessary approach that a boss demands, Oniken will put you in a world of hurt. Once you run out of lives, you’ll have to start the ~15-minute journey to the boss again.

While Oniken’s difficulty is decidedly old school, there are many times where I think the developer could have reconsidered its approach. Castlevania and Ninja Gaiden may have contained instant death traps, pits, and cheap aerial enemies, but these were not the things that made those games good. In fact, these are the things that keep many players from returning to them. There are many times in Oniken where the game’s 8-bit worship doesn’t do it or the player any favors. This is one area where authenticity isn’t a goal worth achieving.

One aspect of tribute that can’t be knocked is the game’s presentation. 8-bit indie games are a dime a dozen these days, but rarely do they sound and look as great as Oniken. Though the backdrops and animation lack some detail displayed in the best Nintendo games, it’s an impressive effort nonetheless. Rather than effortlessly playing upon Nintendo nostalgia, Oniken feels like a project holistically designed around one person’s love of ’80s action film and ’90s anime imports. Even the the music is pretty damn good, for the most part. 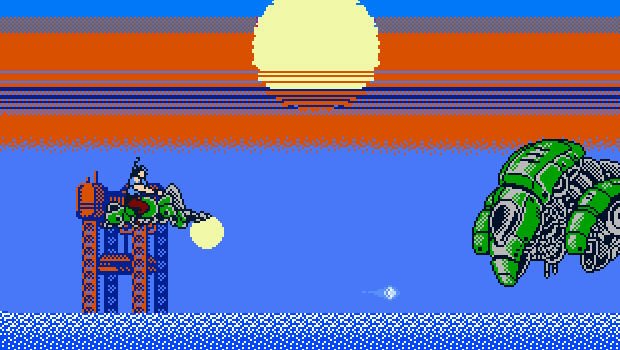 In modeling itself so much after Nintendo action-platformers, I struggle to recommend Oniken. There are so many better games like it for the Nintendo that you have likely never played. And, if you have played them all, you’ll find that Oniken doesn’t quite stack up to them. By trying nothing all that new, Oniken ends up being not much more than fan worship. But, like they say, imitation is the sincerest form of flattery.

Oniken isn’t quite the magical pairing of nostalgia and great game design that Mega Man 9 was, but it comes close to scratching that same itch that few other games have done since. If you love 8-bit games and hate yourself, dying repeatedly within Oniken’s six merciless levels brings its own form of joy that is rare in games these days.

[Oniken is exclusively available for purchase on Desura’s store, with hopes for a release on Steam in the future.]