Late last year, Anno 2070 tried to explore the post-apocalyptic setting of an Earth flooded by drastically risen sea levels, where Kevin Costner would have to drink his own filtered pee. If you just wanted a new Anno game with shinier graphics and a new, futuristic setting, it offered a fun way to dabble in a rather depressing dualistic future in which you tried to out-build hippies and evil industrialists. If you wanted to use naval units to wage war on your enemies, however, it was not the game to play.

Enter Oil Rush, a strategy game that focuses purely on naval warfare in a similar setting and manages to both look and run better than Anno 2070 in the process. 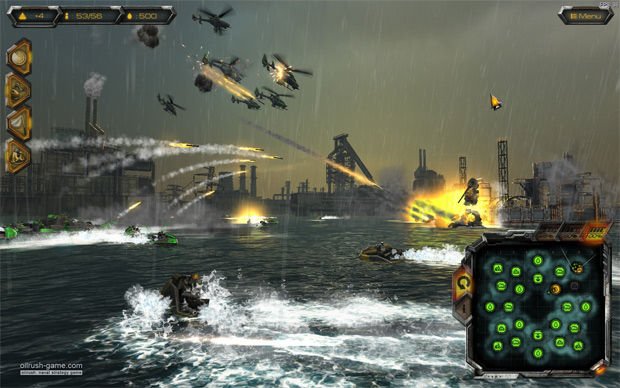 With the Anno 2070 comparison out of the way, Oil Rush is truly its own game and quite a unique one at that. In a world where oil is predominantly sought after by almost all of the surviving human factions, you take on the role of a young commander who uses the precious resource to send countless sailors and pilots to their watery graves.

The easiest way to describe Oil Rush might be to imagine a strange crossover between Z, Sins of a Solar Empire, and a pinch of the resource node system of Company of Heroes and Dawn of War II that cuts the map into strategic sectors. So imagine that, but on water. 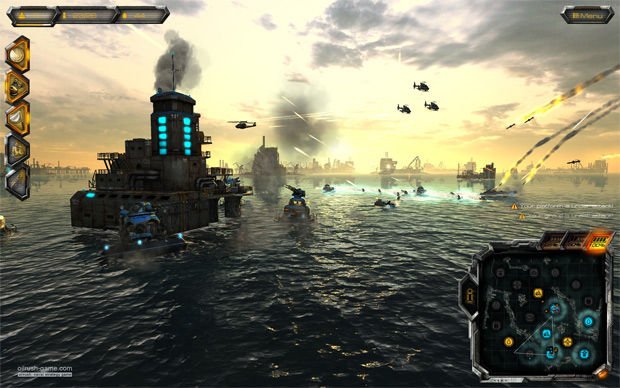 Each map features platforms that either generate oil — your only resource — on a regular basis, or pump out units of a certain kind until a platform-specific unit limit is reached. Contrary to most strategy games, the units you create cannot be directly controlled. Once created, they will circle the platform they were spawned from until you move them to another platform. By selecting individual platforms or groups of them, easily done by clicking and holding the mouse button as you move the cursor over the platforms you want, you move all units to strategically important platforms and form a small fleet.

Except for the oil rigs and oil storage platforms, every platform can support up to five different turrets to be built around it. Machine gun turrets destroy weaker jet ski units and act as flak cannons when upgraded, artillery turrets counter the more powerful ships, and anti-air does what you’d expect it to do.

In most levels in the campaign, the goal is to capture all the platforms on the map. Capturing a platform is as easy as destroying any naval defenders and turrets that surround it, but this is also where things become complicated. Some enemy platforms are well-defended, meaning you will have to move most of your units to one or two platforms and create a force that can deal a forceful blow to punch through, rather than merely tickle, the continuously self-repairing enemy defensive emplacements.

Since any unit-producing platform can only create so many units, you inevitably have to leave a few platforms undefended until you have saved up enough oil to build turrets around them. This leads to a fast-paced type of gameplay where you try to amass units quickly, break through defensive units and positions, take over a platform, and immediately focus on dealing with potential enemy counter attacks. 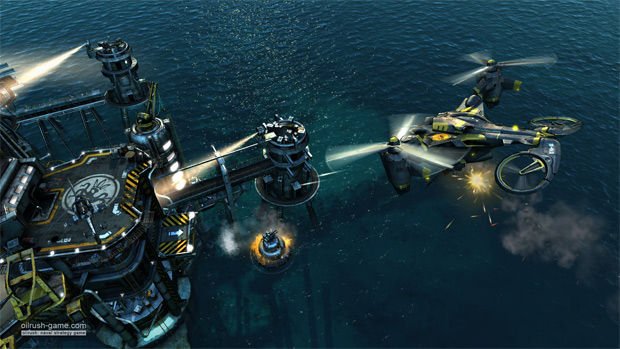 Playing through Oil Rush‘s campaign, you’ll constantly find yourself in a position where you need to balance the benefit of sending a large fleet of your units to take over a platform that will give you even more units, with the risk of losing half your fleet and being unable to defend multiple counters by the AI. Because you can’t directly control your units, you can’t just place them in strategic places to close off paths to your key platforms. They are either en route to another platform, circling a platform, or they can be recalled to the platform they came from.

If you ordered them from one place to another and the enemy attacks the platform next to the one they started out from, there is no way to just redirect them to that one platform that is going to come under attack. You could intercept the approaching enemy units by moving another nearby fleet to a platform alongside the enemy’s path and sending it away at the right moment, but that takes a great deal of micromanagement.

While this can be annoying, it’s also a matter of adjusting to the type of gameplay that Oil Rush‘s design encourages. It takes a few missions to get used to, and a fair amount of instances where whenever you take one platform, the enemy sneakily takes another one. As your oil rigs cannot support turrets, you always need to be on the lookout for enemy movement on the minimap and move units to protect your income before you lose momentum. Meanwhile, destroying more enemies will give you more experience to unlock perks in the tech tree. These upgrades range from increased firepower and armor for your units and turrets, to being able to summon a repair vessel and cast buffs and debuffs on platforms. These “spells” you unlock costs oil to use, though, which forces you to decide between a brief tactical benefit and building or upgrading another turret to help you in the long run. 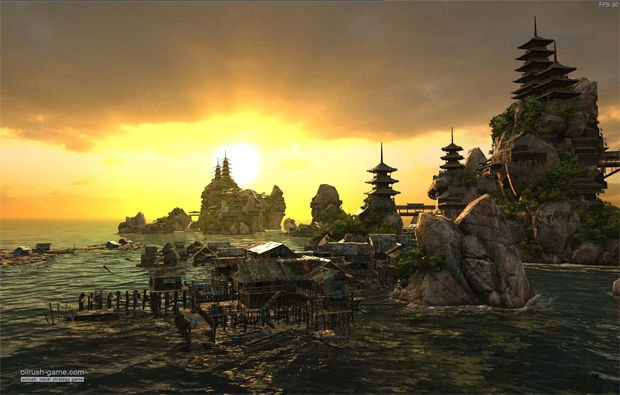 Once you get into the mode of play that Oil Rush expects from you, it’s one of the freshest takes on the strategy genre in a while. It also looks far more beautiful that it ought to on my three year old rig, thanks to the relatively unknown Unigine Engine. Supporting DirectX 11, OpenGL 4.0, and all the graphical wizardry you’d expect from an engine like CryEngine 3 or the latest iteration of Unreal Engine 3, the technical skill we’ve come to expect from Russian programmers is evident in the way the Unigine Engine manages to display impressive graphics at a frame rate I didn’t even know my old graphics card could still handle.

A side effect of the Russian display of skill is that the game currently has a tendency to crash randomly, sometimes requiring a ctrl-alt-del to get back in control of your desktop. This might be a memory leak issue for the Windows version that hopefully will be patched after launch, but it occurred too many times to ignore. Still, the game boots and loads very fast and auto-saves work well enough to quickly get back to where you crashed.

Slightly less worthy of praise than the graphics is how the fast-paced platform-hopping gameplay trains you to keep your eye on the mini-map at tall times. The engine wants you to enjoy your fleet as it majestically cuts through the water to engage the enemy (there is even a dedicated cinematic camera key binding that is explained in the tutorial), but the gameplay encourages you to look at the little map in the bottom-right of the screen. It is in that area that instead of enjoying a graphical showcase of naval power, you watch dots scurry around like ants with you as the hive queen overlord in control of it all. From time to time you’ll be tempted to watch the result of sending all your units to attack a well-defended platform, enjoying explosions that shoot out plumes of smoke and send out debris to sink below the surface of the seas. Then you look on the mini-map and see that two of your platforms are about to be overrun while your own units are half a minute away from coming to the rescue.

It would also have been nice if you could set rally points for your platforms so that any new units will automatically group up at a staging platform. There are options to send 25%, 50% or 100% of your units when selecting any platform, as well as the option to deselect units you’d like to stay behind regardless of what percentage you are sending away. But if you want to split your fleet in two, you’ll have to first click the 50% icon, send the fleet away, and then click the 100% icon again lest you split the remaining 50% of your units in half. Likewise, you can assign any platform or platforms to numeral keys as shortcuts, but it’s just far easier to manually click on everything in a micromanagement fashion. 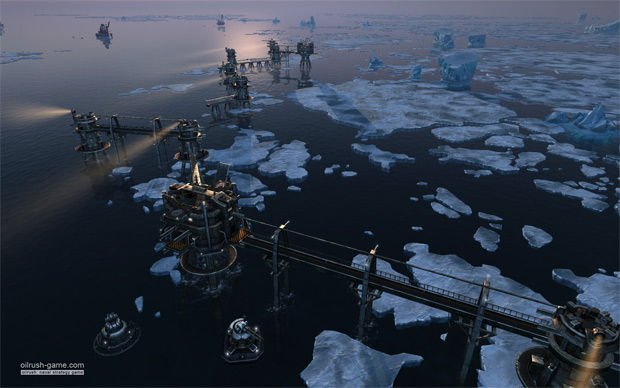 For a budget price, Oil Rush offers one of the first strategy surprises of the year. The simple design of hop-skip-jump platform fights hides layers of depths that make it an easy-to-learn, hard-to-master arcade naval warfare experience. However, the true depth and tests of skill are more likely to be found in multiplayer than in the decently sized campaign or the good amount of skirmish maps available to the player — although the singleplayer components will entertain you for a while. The small team behind the title did a good job creating a story campaign out of the core gameplay, but never hides that Oil Rush feels made for fast-paced multiplayer.

Because you may not even have heard of this game until you started reading this review, the availability of online opponents or partners for a team-based match may be a point of concern. Oil Rush did have a pre-order beta that seems to have had a fair amount of interest, but it wouldn’t hurt to coax a friend into buying it with you. At the time of writing I was unable to find any online opponents, but it is the type of RTS that will make for quick ten minute rounds and longer drawn-out matches, depending on both your own skill and the skill of your opponent. Currently, the game can only be bought through the UNIGINE Online Store, but you will be allowed to activate your key on Steam and Desura when the game releases on those platforms in a few days. Hopefully the larger presence and easier accessibility will lead to a larger online playerbase as well.

What could have been a messy title merely created to showcase the Unigine Engine has turned out to be a surprisingly polished and deep strategy game. Oil Rush isn’t just a joy to behold in action, but manages to make an old genre feel fresh while looking the part.