Get high on mushrooms

You know, when I was asked to review a game that came out the third week of April starring a bearded fellow whose name is six letters long, armed with an axe and magic abilities, traversing beautiful wildlands as he does battle with terrifying Norse gods with the help of a little companion, I didn’t think it would be for mobile. 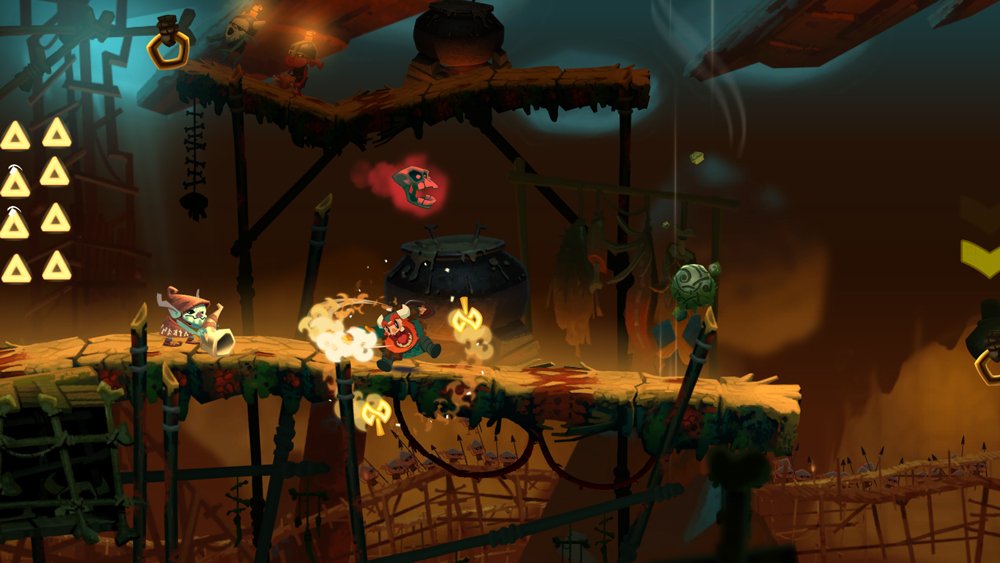 Valhalla. It’s not just a bar in the year 207X but a massive hall in Asgard where half of the people who die an honorable death in battle go, prepared to assist Odin when Ragnarok comes. It’s where most Vikings wish to be after moving on from this mortal coil. It’s where Oddmar’s parents are, having fallen many years before. It’s where Oddmar can end up too if stops being a boil on the ass of his people.

You see Oddmar is not a good Viking. He doesn’t hunt or kill or pull his own weight in any way. He survives off the scraps of his neighbors and they’ve had just about enough of it. If he wants to stay among his people, he’s going to have to burn down the forest as ordered by his chief or face exile like his friend Vaskr. Oddmar is worried. He doesn’t want to go — to face an uncertain future like Vaskr — but he has never really trained to be a Viking.

How is he supposed to burn down an entire forest? More important, does he even want to? What did the forest ever do to him? When faced with such difficult decisions, Oddmar does what so many of us do: He turns to drugs. Specifically, magic mushrooms given to him by a fairy in a dream, because it’s not just his people who are dependent on him becoming a true Viking warrior. If Oddmar fails in his quest, the whole world is screwed.

Platformer gaming on mobile was nothing short of tragic during the early years of smartphone apps. There was Rolando (may that series rest in peace), but most attempts from that era to recreate the traditional console experience with on-screen buttons were dismal. It wasn’t until Canabalt when the genre start to find its footing. Yes, the auto-runner existed prior to this, but it was that game that turned the concept into a mobile mainstay.

Auto-runners are as ubiquitous as match-3 puzzlers in app stores, but the genre hasn’t really evolved outside of adding an extra dimension to the perspective. Developers choke the concept with loot boxes, play counters, and other nonsense, but the challenge of the gameplay remains the same. I won’t argue they’re not addictive — I have far too many hours logged in Spider-Man Unlimited to make that claim — but the compulsion to play because of some inane reward loop algorithm can never provide the satisfaction I gain from a game that empowers me to study its hand-crafted structure and tests more than just my hand-eye coordination. I like auto-runners, I do, but Oddmar is on a level of its own.

Most mobile games feel as though they were created in the smartphone bubble, taking ideas freely from one release to the next but never incorporating the lessons the history of the medium provides them. It’s why so many games feature similar interfaces, microtransactions, and generally have a familiar aura about them. Oddmar is an odd-man-out in this regard as it doesn’t feel like another platformer app. Rather, it embodies the design discipline and fun factor of games like Rayman Origins and Donkey Kong Country: Tropical Freeze. 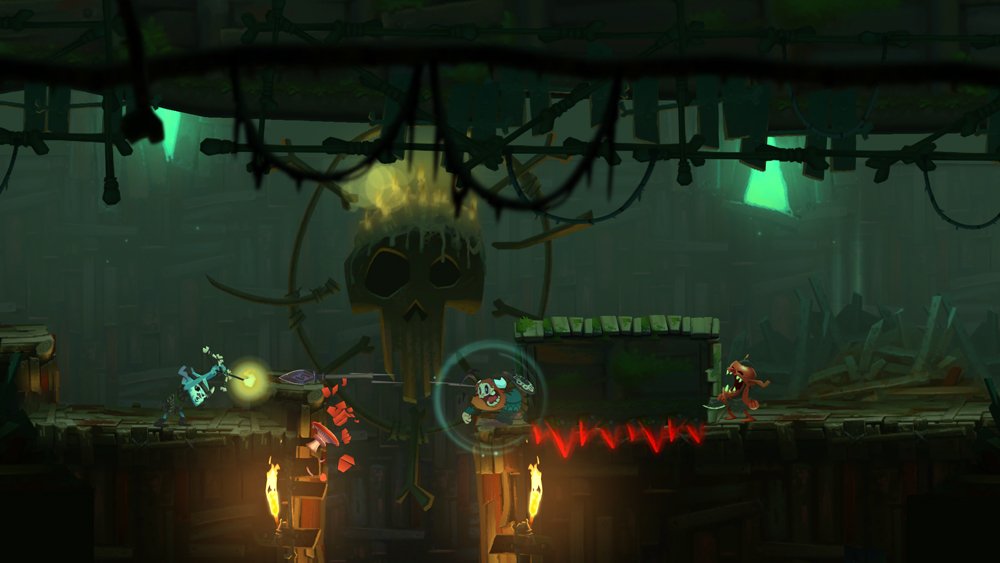 Arguably the two greatest 2D platformers yet, Origins and Tropical Freeze excelled with levels designed around a natural tempo. Bouncing along in either of those games, it wasn’t hard to fall into the rhythm of the layout, to hit every enemy at the exact moment the developers wanted you to, propelling you forward through the ebb and flow of each section. Even if it’s not as intricate, the designs of Oddmar are pages torn out of the playbooks of both games.

Throughout the 24-stage adventure, its story brought to life by voice actor Julian Casey channeling every enthusiastic father reading to their child before bed, I am filled with delight as I bounce off every baddie, discover every hidden area, or ride atop one of my massive animal friends. There is discipline in Oddmar‘s structure, learned from decades of previous platformers. Enemy placement is a key and oft-overlooked aspect of 2D game design as it is one of the deciding factors in just what type of game is being created. Because not every platformer is the same, proper enemy placement will vary from title to title. If the developer is going for an exploratory game, bunching up baddies in haphazard patterns is fine because players are expected to take it slow through each stage. Oddmar wisely chooses a more calculated arrangement of enemies, creating a pulse for every stage I can ride to the end or ignore in favor of a more thorough exploration of every last nook.

The methodical details of the level structure mesh well with the art direction. Though it doesn’t feature the imaginative settings of its less-grounded contemporaries, the world of Oddmar is lush, rife with life and little touches I only catch on my second trip through each stage. A few of the boss battles are a true sight to behold, and though the final battle isn’t as illustrious as its forebearers, the obstacles it throws at me are nothing less than a test of everything I master in the preceding four hours. Oddmar himself is brilliantly animated, making me chuckle when I see the big goofy grin on his face as he surfs his shield down a wild river. 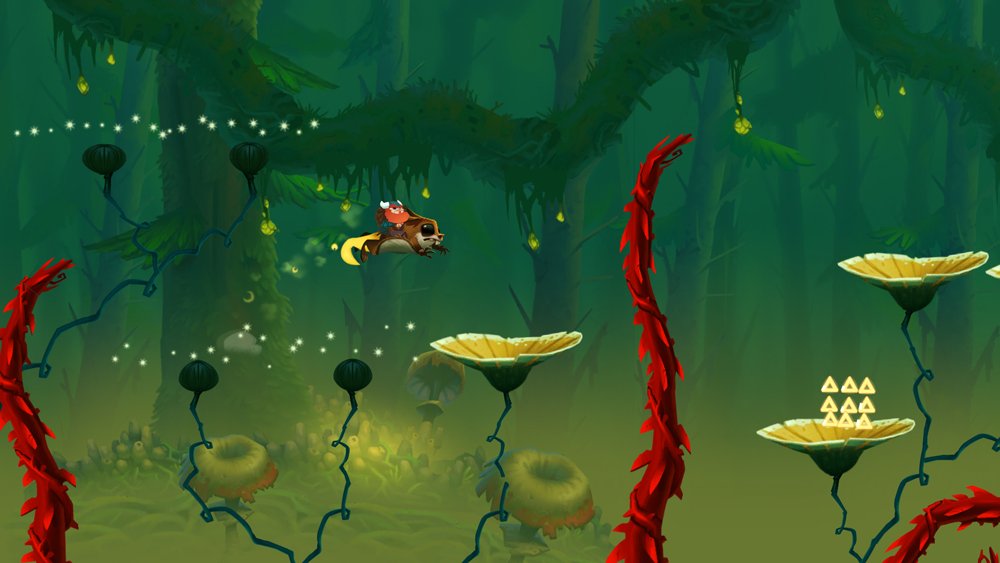 Exquisite level design is nothing without adequate controls, the most crucial aspect of any game. Developer MobGe absolutely nails this by eschewing a touchscreen replica of a standard controller layout. That magic mushroom mentioned earlier gives Oddmar the ability to jump up high, much to the chagrin of his fellow Vikings. It’s just one of his attacks I have at my disposal. I can jump on most enemies or give them a whack or two with my upgradeable weapon. These actions are handled on the right side of the screen. Swipe up to jump off the ground or walls, down to pound, and touch to swing my axe. I swipe and hold on the left side of the screen to handle Oddmar’s movement, and I have to hand it to the developers here because the controls in this game are the best I’ve come across in a mobile platformer. There are no buttons to worry about for finger placement, just simple gestures.

I honestly don’t think I can ask for a better platformer on mobile, simply a longer one. Oddmar doesn’t overstay its welcome, not by a long shot, but does leave far before it really has a chance to blow me away. Each level, save the bosses, has challenges I can complete but those only add an additional hour or so until I’ve exhausted everything there is to do. A few clever concepts — like a particular balloon ride sequence more than halfway through — have me wondering what could have been if the developer decided to double up on the length of the game.

But pish-posh to all that. Oddmar, even as an abbreviated experience, is one hell of a game and easily one of the best platformers on the App Store. Everything about it smells of effort and dedication to the craft. This is a game that respects me as a player, not as just another potential whale to siphon money out of.