An interesting exercise in game design is to identify assumptions about the genre or medium in general, then question those assumptions. One such assumption that most make is that control should feel natural and unobtrusive as the player’s interface with the game. Octodad: Dadliest Catch challenges that idea, making awkward control central to the gameplay.

While the tasks in Octodad would be mundane in almost any other setting with a typical control scheme, they can be challenging or thought-provoking to an octopus dressed up as a human. By requiring a certain amount of care and effort, things like mowing the lawn or visiting the grocery store are made fun, though they can dip into the realm of frustration at times. 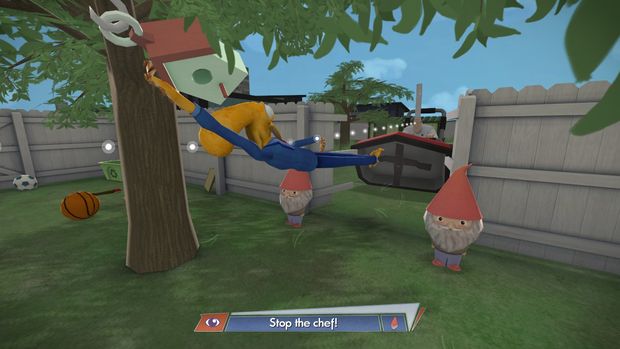 Octodad is just a typical guy, trying to make his way through life with his wife and two children, except that he is an octopus and he has the additional burden of keeping that a secret. Dressed in his snazzy suit, most people are none the wiser about his true identity, but suspicions rise when he is spotted acting strange.

In addition to mouse and keyboard control, full gamepad support is in place. I ended up preferring playing with a controller, but both work on the same principles. By default, players control three of Octodad’s limbs: two legs and one arm. By manipulating their positions in space, Octodad can walk, run, climb, grab objects, and do all of the things a normal human being does. The kicker is that each limb is generally controlled one at a time, and they are all held together with an elasticity that often sends them off in unintended directions.

The result is almost like handing a non-gamer a controller and putting him in the thick of a first-person shooter; there is a lot of flailing around and looking at the ground. It takes a certain amount of brain rewiring to be able to make Octodad move as intended, even when the necessary sequence of actions is cognitively clear.

In any other game, these would be complaints, but Octodad is specifically about being uncomfortable and learning how to function in a body that is almost alien. For some, it may be frustrating, but for those willing to put in the effort, it is ultimately rewarding to learn how to function as an octopus in society. By the end, players should be able to walk competently without knocking things over or punching kids in the face too often.

Being an octopus also affords Octodad some benefits that humans cannot reap, like the ability to squeeze into tight spots or to stretch out over large gaps. Young Horses built this awkward, difficult control scheme, and then crafted environments that take full advantage of its physics. 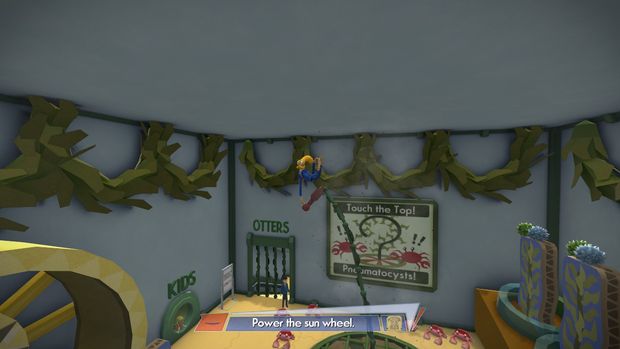 Where the previous title was more of a proof of concept on the control scheme, Dadliest Catch delves a bit more deeply into Octodad lore. Revealed over the course of the campaign are how Octodad and his wife Scarlett met, when he decided to start masquerading as a human, and why the neighborhood sushi chef wants to kill him so badly. Of course, how he and Scarlett managed to have two human children is jokingly brought up but never seriously addressed.

Truly, Dadliest Catch realizes how silly its concept is, and never takes itself too seriously. The writing fits the mood perfectly. Some of the off-hand remarks and terrible marine biology puns are worthy of a few laughs, but the general absurdity of the situation in its entirety is the biggest source of humor throughout the game.

The silliness is conveyed well through the graphics and sound as well. Octodad lives in a colorful cartoon world that serves as a welcome contrast to the muted palettes of more realistic games. The soundtrack is similarly upbeat and peppy, and it features a main theme that will be stuck in my head for years. 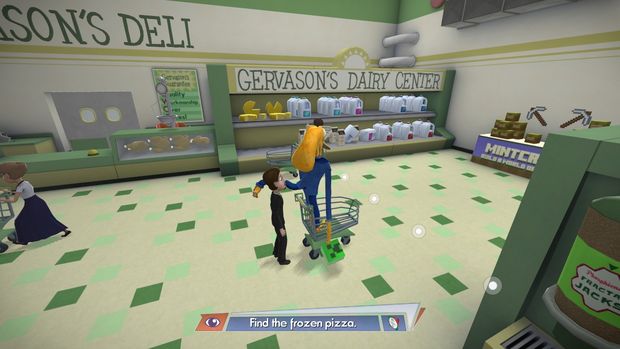 Though it looks great, there are occasionally hiccups throughout in which the graphics lock up for several seconds at a time. It is a minor nuisance for most of the game, but one area in particular features spawning urchins that exist in number too great for the system to handle. Calculating the physics and rendering that many objects is just too processor intensive, and the experience becomes screen-punchingly unplayable with normal settings. Even after dropping the graphic effects and resolution to their lowest levels, the World of Kelp plods along with frequent framerate drops. That it ends with a fairly difficult climb up a jungle gym exacerbates the issue; ascending a fair way up just to fall due to graphics locking up is intensely frustrating.

Another potential sticking point for some might be the relatively short length of the story. Clocking in at about three hours, it ends before the central conceit starts to wear thin. Dadliest Catch does about as much as it can with its octopus limb control scheme, but it (ironically) would not have the legs to last much longer. I personally had no issue with the length, but those who like to calculate hours of entertainment per dollar may take exception that the main story finishes not very long after it begins.

Alleviating that a bit are some optional objectives for those who want to keep playing. Each level hides three custom neckties for Octodad to wear, each requiring thorough exploration, tricky climbing, or some interaction with the environment. Additionally, each level has a par time to beat, opening it up for potential speed running.

Also included are Steam Workshop support, so users can create their own levels, and a hilarious cooperative mode that allows up to four players to control one or more limbs, requiring an unusual form of teamwork and resulting in an even more awkward octopus than usual. Despite the short length of the campaign, there is enough in place for diehard enthusiasts to keep going for as long as they want.

In the end, I would not be surprised to hear that the Octodad community is thriving years down the road. It exudes a certain weirdness and charm that makes it stand out from a lot of other titles out there, and there are tools in place for it to live on past the point when the credits start to roll. Though it has some issues with framerate drops and its approach to control is definitely not for everybody, Dadliest Catch kept a smile on my face for most of its duration.