Some games get a mobile port where the touch interface doesn’t really add anything. Other games actually benefit from the tension of having to use multiple touch controls simultaneously where the effect is enhanced compared to mouse and keyboard or motion controls.

NyxQuest, previously released on WiiWare and on the PC, feels like one of those games where the touch interface actually adds to the game — and it’s the cheapest version to boot. 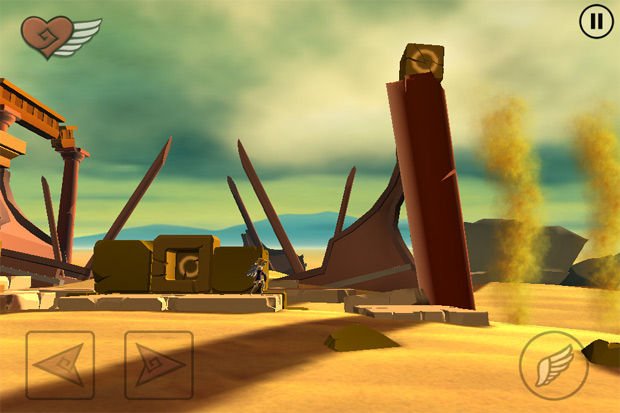 When Icarus still had his wings, he met and frolicked with Nyx — the goddess of the night — until Helios got annoyed with mankind’s sinful and greedy ways and decided to roast the planet, melting the wax of Icarus’ wings. At least, that’s how the story goes in NyxQuest.

As the eponymous Nyx, it’s up to you to platform and puzzle your way through twelve levels to find your beloved and grounded mortal, and to return night to a world of sun in order for a new dawn to rise. 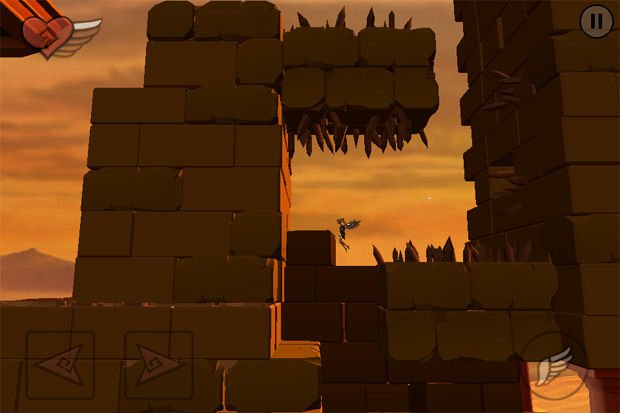 The controls offer a mix of familiar touch elements. On-screen buttons in the bottom corners provide the basic left and right movement and a jump button. Nyx can jump up to five times in a row (she has wings after all) and holding down the jump button lets her glide for a few seconds. It works well enough to let the player do its platforming, and occasionally you’ll have to mess around with the best way to reach a high or hidden location by combining multiple jumps and glides.

As you progress, other control elements enter the fray. Fireballs that periodically get blasted out of the ground or walls can be flicked into enemies to get rid of them. Shining doors and blocks can be pushed open or away using your finger, or you can hold them in place to run under pillars that would otherwise crush you. Occasionally, you’ll have to move a block or a flame to guide them to a location that opens a door for you.

Later on, you’ll be able to change the paths of jets of wind to float through them, or touch enemies and certain blocks of cracked stone to zap them with the power of the gods. 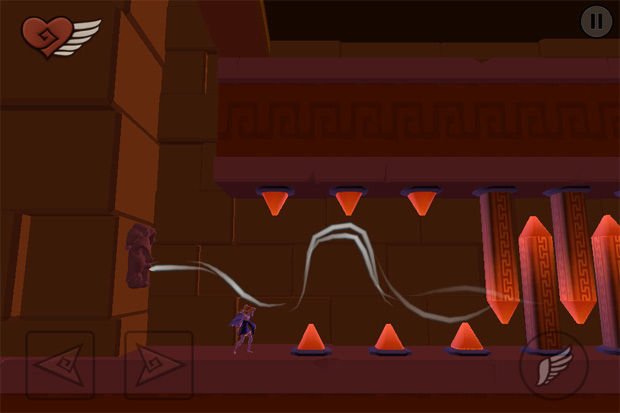 It’s when all these elements combine that the game really shines. You’ll always have your thumbs on the bottom corners to control Nyx, but sometimes you’re forced to let go of the jump button to zap a few enemies in your path, only to quickly return your thumb to the jump button lest you fall to your doom.

Other times you have to tap and hold a couple of pillars in a row to move under them, but to move you still need to quickly let go, move, and hold those pillars again so they don’t crush you. Sure, you could grow an extra pair of hands or put your device on a table to use multiple fingers, but when you stick with your thumbs it adds some nice tension to what would otherwise be a pretty casual platformer.

The level of challenge feels right whether you’re a hardcore 2D platformer enthusiast or not, even if some of the more casual players may get some more playtime out of NyxQuest through inevitable failures. If you’ve played your share of platformers before, you’re not likely to have any real problems with the game, but every level offers some new variety to keep things interesting. 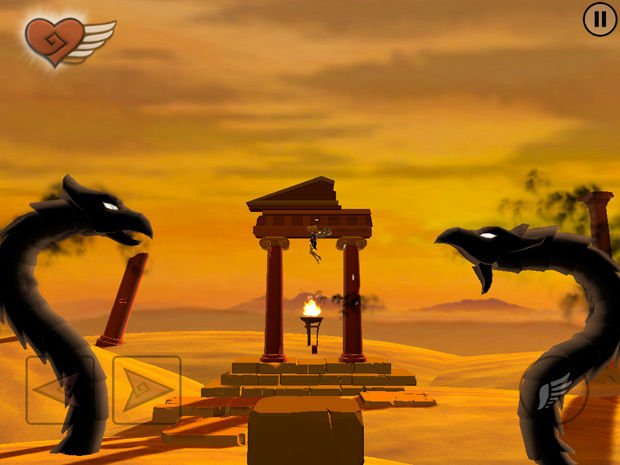 Graphically, NyxQuest looks fantastic. While the desert backdrop is a bit overused — if fitting for the storyline — it does look great, especially on a Retina display. There’s something about the mix of graphics and the game’s design that makes it really easy to get immersed in all of it, despite playing on a small screen.

Although all the touch controls combined work really well to keep you frantically touching the screen in later levels, especially during a very tense section where a giant eye will instakill you if it catches you in the open, the on-screen buttons can sometimes get in the way. For instance, a block you were supposed to take somewhere can get stuck behind a button, forcing you to move somewhere your finger can “catch” it again. However, it’s never a huge issue to work around, just a minor nuisance.

It’s also not the longest game or the kind you’re likely to return to after finishing it. Each level does have a few hidden relics you can find, but that’s it. That said, if you play a level here and there when you feel like it, you still have a really enjoyable game to help you through a week of casual play. All in all, you can probably finish it under 3-4 hours or so, but it’s best played in bursts of 10-15 minutes.

I’m sure the relatively high price for the iOS version of NyxQuest will put off some of the more casual spenders, which is a shame (there is a lite version, if you want to try it out first). NyxQuest is a fine example of a mobile game that successfully makes the transition from other platforms to reach a wider, and different, audience. It plays like it should have been a game made for touch interfaces from the start, and it’s the kind of game that would probably do well on a handheld’s downloadable service.