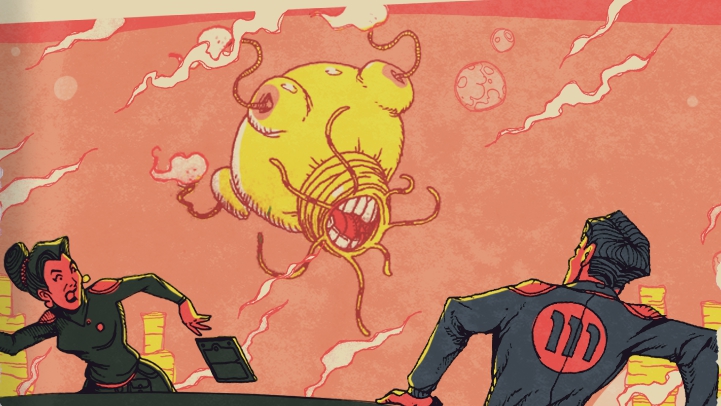 Genres and mechanics have names for a reason. When something comes up often enough, it’s worth developing a shorthand and grouping things together that feel alike. In the past few years, mashing up genres has become the new it thing. When done well, a game can be more than the sum of its parts. Nova-111 is a great example.

The quirk of Nova-111 is exactly what it decided to blend together. Real-time control and turn-based gameplay are almost always mutually exclusive; having one generally precludes the other. Funktronic Labs has crafted a game that melds the two together, and not only does it work, it feels totally fresh and new.

Conceptually, it’s a little hard to wrap one’s head around at first. Thankfully, Nova-111 eases players into the ideas a little at a time, introducing new mechanics throughout the six-hour campaign.

Some science experiment has gone wrong and messed up time. Now it’s all wonky (that’s the technical term). Set on a square grid, each player movement counts as a single turn. For every turn taken, any enemies also get a turn.

So far, it sounds pretty standard, but here’s the wrinkle: some objects act in real time rather than being set to a schedule of turns. The first example are the stalactites. If the player bumps one from the side or travels underneath it, then it will begin to fall at a steady rate, whether the player (and enemies) are moving or not. It sets up a particularly satisfying scenario: get chased by an enemy, run under a stalactite, then stop dead and just watch as it crushes the pursuer.

As it progresses, Nova-111 adds more and more combinations of real-time and turn-based gameplay. Some enemies’ movement is turn-based, but when attacked set off a countdown timer before exploding. Some will grab the player and must be defeated quickly. Eventually, some enemies move in real time, independent of turns taken.

It’s a real brain bender at times. Just when I thought I had a good handle on the situation, taking things slowly and flawlessly taking out the dangerous aliens, I’d get thrown into a situation where I needed to react quickly and I’d fall apart. The combination of real-time and turn-based gameplay forces me to think differently than I ever have before. It takes two ideas I’ve known for years and turns them into something that feels totally new.

Nova-111 doesn’t stop with that basic idea. Through the course of the game’s three main areas, new enemies, terrain, and mechanics are presented. There are doors, switches, sliding blocks, oil, teleporters, fire, stealthy bits, and more, each interacting with the weird time scheme in its own way.

While tactical combat and puzzles are the main points, exploration also plays a role. The overarching goal is to collect the 111 scientists scattered across the game, most of whom are in fairly well-hidden locations. At first most of the secret areas are accessed by passing behind false walls, but the best are in plain sight but require solving a more taxing puzzle.

The art design supports the exploration aspect well. At the beginning of a level, most of it is covered in a sort of fog of war. Any square in line of sight and within a certain range is uncovered, and the uncovering effect (and environments in general) look fantastic. I spent a lot of time in the early levels moving very slowly, just taking in the artwork as more of the world was revealed.

The exploration aspect isn’t all rosy. Individual levels are broken up into several smaller areas, but each area cannot be played independently. It isn’t obvious which area a missing scientist may be in, so going back through old levels for 100% means replaying a lot unnecessarily and wasting a lot of time bumping into walls. The levels take between 20 and 30 minutes apiece, which is just too long for me to want to replay. I would have preferred if each bite-sized area were shown on the level select screen, with its completion statistics displayed.

Those who aren’t daunted by having to replay entire levels will enjoy the New Game+, which is essentially the same experience but with several cheats available to be toggled on or off. Where previously some care needed to be taken to conserve abilities, New Game+ allows players to go wild with them.

Even though I don’t see myself replaying Nova-111 for full completion any time soon, I liked what was here. It has a sharp look, some chuckle-silently-in-my-head comedy, and gameplay unlike anything else I have experienced. It forced me to think in a totally new way, which is increasingly uncommon with most established genres.