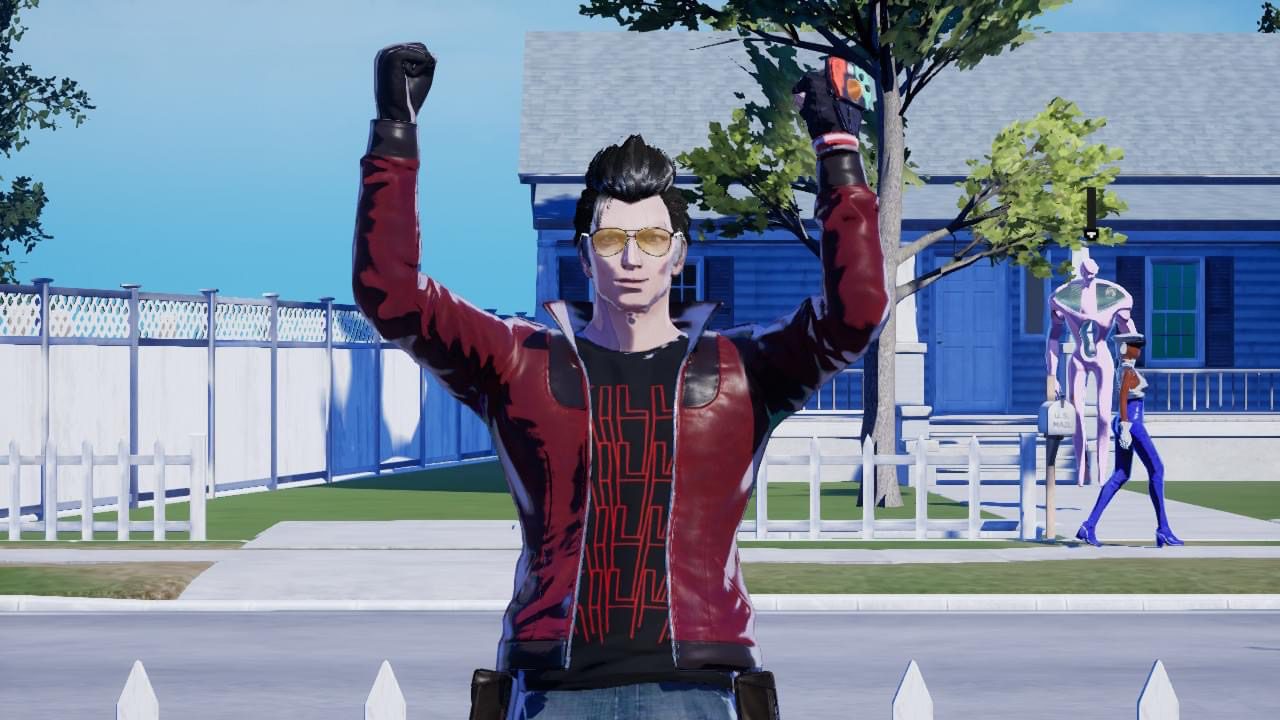 If Suda 51 touches a game, generally I’m going to be there. While he’s been pumping out interesting games since the ’90s, it was killer7 that really put him on my radar, and I’ve been following along closely ever since. But just a few years later with No More Heroes, he really showed us how weird he could get.

The gaming industry is a better place with Suda in it, and No More Heroes 3 continues that legacy, albeit with a lighter touch than the two previous entries. 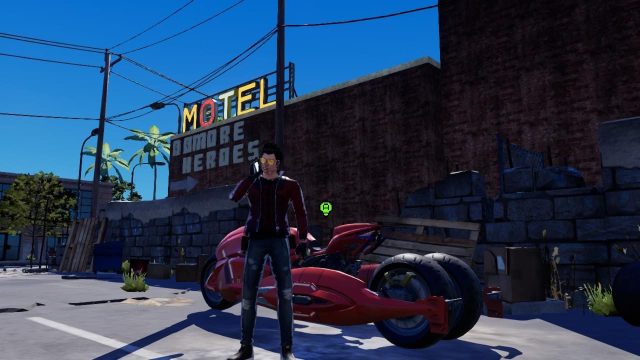 If you need a recap, check out this wonderfully detailed piece from our own Jonathan Holmes. Ready? No? Well, I’ll fill you in a little bit: don’t say I never did anything nice for you.

So Travis Touchdown is back, and once again up to his old shit-talking beam-katana-wielding antics. At this point he’s assembled quite the crew of friends, which in turn allows him to get a little too comfortable and cocky: a concept that kind of spills over into the narrative.

This time all-around bad dude and alien prince Jess Baptiste VI (aka “FU“) is trying to take over the world, and he’s going to make you run through his retinue to get to him. The new alien invasion angle in No More Heroes 3 is interesting, as it gives Suda a chance to slot in the same “ranking up by killing assassins [bosses]” concept from prior games. As soon as the incredibly weird mix of retro sensibilities and an anime involving a young alien and his best friend flashed on-screen all as part of the intro, for the first time in years, I felt right at home.

No More Heroes 3 is content with constantly throwing you curveballs, some of which are wild pitches that land in the stands, but you can’t help but respect them. By the time I got to a cutscene featuring a boss drinking boba tea with another boss, I was hooked. Uneven or not, No More Heroes 3 is constantly surprising, even if it falls into a comfortable rhythm about halfway in.

That comfort can manifest in a number of ways. Without spoiling anything, there are a few “cop-out” twists that are meant to be funny, but don’t always land. Suda also dials up the meta-humor this time around, which suffers a bit from the long-running history of the series. When No More Heroes started, that style was relatively novel, as all of the references were literally history-making within the confines of NMH lore. Now, with two main entries and a spinoff in the mix, some of that humor doesn’t stick the landing. Even with that in mind, Suda is masterfully able to inject so much personality that you can’t help but come away smiling and impressed.

Like past games, you’re going to be running around doing errands and fighting a lot, so we should probably talk about that. I found combat to be really engaging, mostly due to the simplicity of the beam katana mechanics still working after all these years. In this entry you have your typical spread of jump/normal attacks/heavy attacks/dodging/blocking; with a pinch of special attacks, QTE killing blows and wrestling throws, slot machine power-ups, and of course, shaking to recharge your katana (either the Joy-Con or the analog stick).

The slot machine is really key to differentiating No More Heroes 3 from the rest of the pack. While in many games you may want to go for a tougher more aggressive enemy initially, here you have the chance to pick off weaker chaff to build up slot machine pulls that might power you up to better take on those buffed-up foes. Once you start acquiring abilities like what is essentially a force push, you can isolate people (like flinging someone into a corner) and adjust your strategy on the fly. 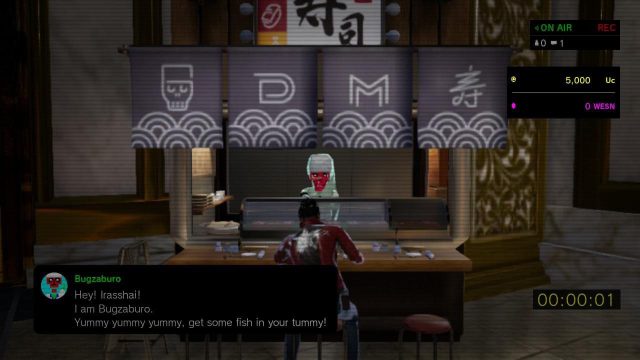 There’s always something interesting going on, even during some of the more menial fights. Whether Travis is yelling at the top of his lungs or you’re sliding into your mecha suit to blow everyone to hell, combat is flashy while remaining functional. The main issue lies with the mecha-specific battles (typically in space), which are heavily simplified and can generally be bested by just constantly strafing. While I’m thankful that these sections aren’t too frequent, there’s a lot of potential there to ape games like Colony Wars and make a really fun space shooter that just wasn’t realized.

That comes with the territory. No More Heroes 3, like past entries, requires a bit of patience in several areas.  The open-world bits are still incredibly janky, and collision detection is sketchy in the best of times when riding around in your motorcycle from place to place. For reference, it’s not fully open world, but a handful of individual sandboxes that are connected through highway load points (or a fast-travel system).

It’s here that the frequent load times can get annoying, which happen every time you enter/exit a building, load into a new area, or start a battle (of which there are many in-between the main-event boss fights). Speaking of battles, you’ll need to finish “Designated Matches” — which are basically small arena skirmishes — before unlocking the more outlandish bosses. It can feel like busywork, but given my aforementioned love for the combat system, the juice was always worth the squeeze. Plus, if I felt winded, I could just drive around and take in the sights. 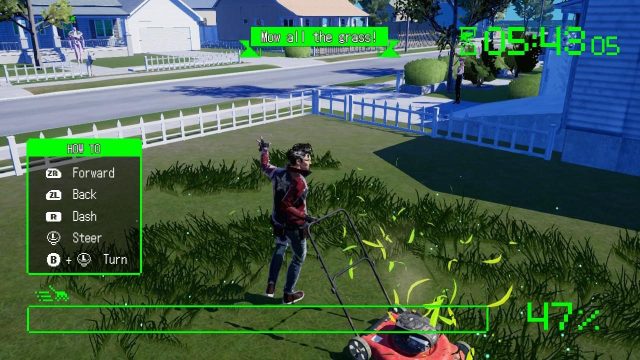 There’s sidequests like finding scorpions, unclogging toilets to unlock icons on the map (like radio towers), planting trees, fighting bosses again through a time machine, doing odd jobs (there aren’t many games that kick off a mission with the phrase “stop the alligator invasion” before outfitting you with a tank turret), and a lot more. Really, a lot of the charm of No More Heroes 3 is when you stop and smell the roses. I ended up finding out about a pretty challenging seek-and-find endgame quest way after the credits rolled and chuckled at some of the spam “email messages” that Travis gets, like “Notflix suggestions” for movies to watch.

One major random cutscene bit involves Travis gushing over his favorite Takashi Miike films between bosses. There’s even a text adventure side story playing out that you can miss out on, on top of a New Game+ mode, a “Carolina Reaper” difficulty, and a retro minigame. I’m extremely confident that I haven’t discovered everything No More Heroes 3 has to offer, and that’s really refreshing.

Even in this resplendent era of weird, as indie developers self-publish their outlandish concepts with pride, outside of Swery, no one does strange like Suda 51. Although this is likely the safest No More Heroes game to date, it’s still incredibly memorable and fun to play, whether you’re rushing to the end or taking in Santa Destroy and beyond. Go into No More Heroes 3 with an open mind and enjoy the ride.