It’s hard not to be wary of something given away for free in the age of Horse Armor DLC. Nitronic Rush is neither Korean nor a free-to-play MMORPG, so I let my guard down this time — good thing too!

Nitronic Rush is a passion project by a handful of DigiPen students, who have created a racing game more innovative than anything the major league studios have delivered this year. Its Tron-like visuals, Daft Punk influenced soundtrack, and chaotic tracks merge together to make a unique, memorable racing game. This game won DigiPen’s 2011 Game of the Year award for good reason, as it turns out.

One of the most difficult things in game development is having a good sense of quality control. Nitronic Rush has perhaps too good of a sense for this. Its opening seven Story Levels are so well designed that it’s shocking that the game was made by amateurs. Then you unlock five “Old Levels,” that were scrapped because the team didn’t think they were good enough, and discover they are awesome too. Even Nitronic Rush’s scraps are worthwhile!

None of this would matter if the controls and general design of the game wasn’t so innovative. Nitronic Rush is as much about survival as it is about racing. That description may make it sound like the Stuntman series, but the game ends up playing more like a mash-up of TrackMania and Burnout. You speed your way down neon-lit, futuristic race tracks, as you survive buzz blades, long chasms, and a track that forces the player to change his center of gravity. 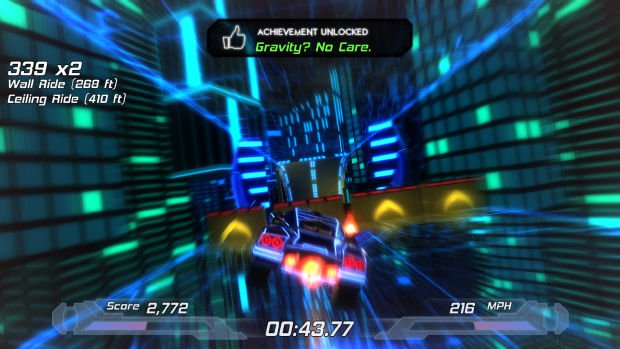 Nitronic Rush is made to be played with an Xbox controller. The weight of the cars and physics of the game don’t feel perfect, but anyone who has played a Ridge Racer or similar arcade racer will be able to adjust. Along with a Motorstorm-esque boost that will kill you when overused, your car is equiped with wings that help you glide across gaps, a jump for elevated platforms, and the ability to move to a horizontally- or vertically-positioned surface by moving the right-analog stick in the correct direction.

While the Story Mode is a pretty easy introduction to the game’s mechanics, the five levels in Hardcore mode reach Trials HD levels of challenge. Flipping your car to a track above you and then rotating (mid-air) back down is pretty damn difficult. In fact, I wasn’t able to beat the game because one section was so insanely hard that I eventually had to give up. It’s hard to say if it is the game’s fault or mine, until more players get their hands on it and we see what is possible. 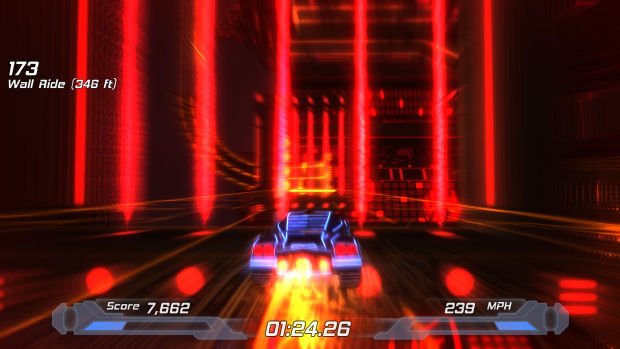 Though the game has no mulitplayer or traditional race mode, it does have leaderboards and the ability to download ghosts runs of other players to compete against. Along with the normal tracks, there are eight challenge tracks and two maps for tallying up a high score with the trick system. Unfortunately, the trick system is the worst aspect of Nitronic Rush. Since the physics aren’t fully realized, flipping your car and landing it feels awkward. Making a mode where this is all that you do just highlights the game’s flaws.

The Challenge maps take different obstacles from the main campaign and expand on their difficulty. One called track, called “Car Wash”, challenges the player to drive down a tunnel made of grinders and buzzsaws. Another has you flying your car through an asteroid field. Some of these levels are even harder than Hardcore mode, so you might want to skip these tracks until you’ve beaten that. These challenges can be beaten fairly quickly, but it’s a nice addition. 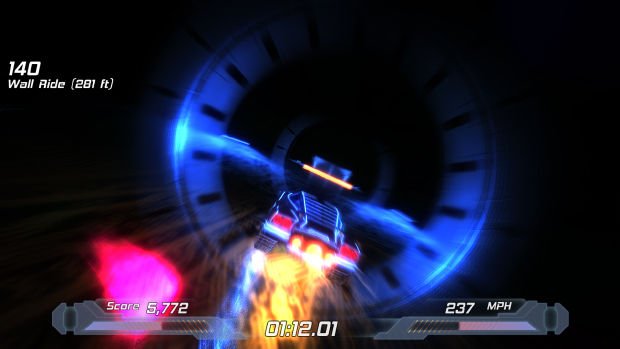 There are retail games, made my large teams over the course of years, that have have been released this year that can’t compare to the vision and originality of Nitronic Rush. Though the game lacks polish and could greatly benefit from more maps and modes, it’s a thrilling experience while it lasts. The visuals, music, and fast, chaotic gameplay compliment each other well. All these elements come together to make for a refreshing racing game.

Every couple years a couple students from a game development school remind us why these places exist. Not since the original Portal has a group of students made such a unique, well-made and fun game. With a Valve and extra revenue behind them, there is no telling what this team can pull off. 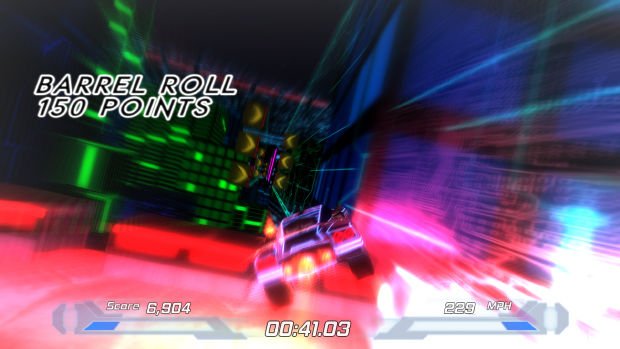 Nitronic Rush is free. If you like a unique, challenging racing game, there is absolutely no reason you shouldn’t download it. In due time, development studios, publishers, and gamers alike will be keeping an eye on these young gun developers.