The Wii U GamePad is a lot more versatile than it looks. Some potential consumers have not been quite as inspired by the system as they were by the immediate uniqueness of the Wii and its remote controller. After all, tablets and smartphones have gotten us used to gyroscopes and touchscreens — what could the Wii U give us that’s so interesting?

Nintendo Land is the answer to this question. While none of the games included in this glorified tour of the Wii U’s capabilities are compelling enough on their own merits, they contribute to an overall package that does an exemplary job of showing why the Wii U has so much promise as a system. This is a game with one job — to sell you on the merits of a GamePad.

It accomplishes this job. 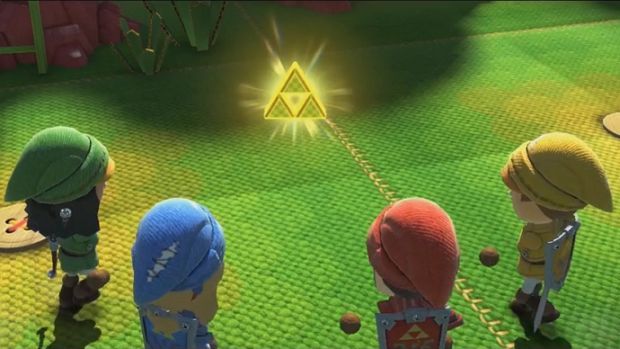 Nintendo Land is a virtual amusement park boasting a series of attractions based on classic Nintendo properties, from Super Mario to Animal Crossing. Essentially, it’s a minigame compilation, but before you roll your eyes in jaded memory of the Wii’s minigame-saturated library, bear in mind that the Wii U needs, perhaps more than any other system, this kind of title at launch. The GamePad can be used in many more ways than the Wii Remote, and Nintendo Land does a fine job of demonstrating this.

Each attraction uses the GamePad in a different way, meant to show off a number of intriguing ideas that, while not fully fleshed out on their own, could be evolved later down the line to potentially support any number of full games. There are 12 attractions in all, some of which are solo affairs, and others able to be played with friends using Wii Remotes.

Solo attractions are, as you might expect, for one player using a GamePad. Takamaru’s Ninja Castle is a shooting gallery in which the GamePad is gripped on one side and aimed at the television. The player fires shurikens at the screen by swiping the touchscreen, as if they’re whipping the throwing stars off of a table. Donkey Kong’s Crash Course makes use of the gyroscope to tilt an arena of platforms and navigate a little wheeled contraption to a finish line. F-Zero Racing has players looking at the GamePad screen to get a bird’s-eye view of the race course, while the television screen shows the racer from behind. Using these two perspectives, the player can gyroscopically steer the vehicle along a winding path from above, while using the rear perspective to navigate through tunnels.

Team attractions combine one GamePad user with up to four Wii Remote wielders to cooperate in levels inspired by The Legend of Zelda and Metroid. In the Zelda courses, the GamePad user is an archer, aiming with motion controls and firing with the right stick. Wii Remote players are swordsmen, and swing at the opponents while looking at the TV monitor. Metroid is rather similar, with players using spaceships and ground troops for a larger battlefield that isn’t as much of an on-rails experience as Zelda. While Metroid is more free, I have to say I enjoy the Zelda attraction much more, especially when played cooperatively. Controls are simple, tight, and very well implemented, while the typical Zelda charm is of course a nice bonus.

Competitive attractions are no less self-explanatory, as these pit the GamePad user against up to four Wii Remote players. By far the standout game is Mario Chase, in which the GamePad user is Mario and the Remote users are Toads, charged with catching him. Mario gets a full view of the arena that only he can see, while the Toads have a limited field of view on the television and only audio cues as to which colored zone their objective is hiding. It’s a lot more fun than I expected it to be, and could make a great party game. Luigi’s Ghost Mansion is similar, with one player acting as the ghost and using the personalized view of the map to sneak up on opponents before they can blast it with torchlight. 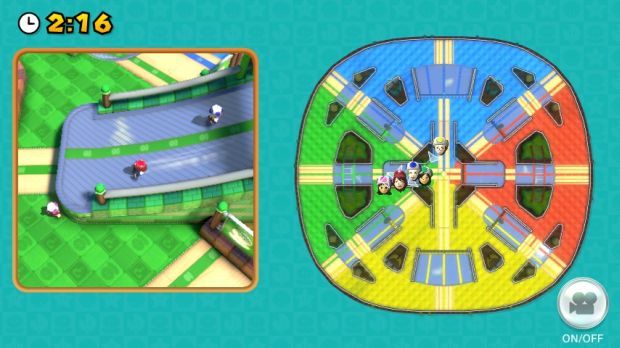 There are a few games using the (already) overlooked stylus, one in which players swipe gusts of wind to direct a balloon-hoisted character across a course of hindrances, and a very intriguing little puzzle game in which a course is drawn on the touchscreen to direct a Yoshi to eat pieces of fruit and reach an exit. The twist is that fruit and obstacles are only visible on the television, so the player has to estimate the approximate position of them on the touchscreen using the visual clues set up by the terrain. It’s a clever idea, and can become quite tricky indeed once later stages are reached.

All these attractions are themed around a central hub populated by all manner of twee Nintendo Mii characters. In each game, coins can be earned and spent in a simple ball-and-peg minigame to unlock decorations for the hub, such as items and enemy statues, a jukebox, and a button to change the world’s ambiance to daytime, dusk, or night. I do wish this area of the game wasn’t as barren as it is. 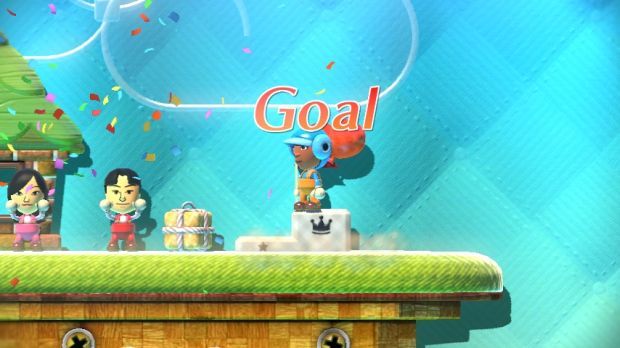 Nothing Nintendo Land does is necessarily enthralling, providing as it does a selection of fairly disposable games that can be picked up or dropped at leisure. They’re fun, but they’re not going to keep you playing for hours on end. Their job, as I’ve said, is to showcase the GamePad, and that is what they do. They make an incredibly convincing case that the GamePad is more than just a poor man’s iPad, especially when it comes to utilizing the two screens and exploiting the unique properties of one GamePad user versus multiple Wii Remote players. Its competitive modes are more than capable of being used as party pieces, and I have no doubt it can be used to keep kids entertained for quite a while.

Graphically, the game looks pretty damn impressive for a minigame collection. The bold colors look fantastic on an HDTV and do a fine job of showing just how great a Nintendo game can look when it’s not tied to a standard resolution.

One major downside of the game, however, comes in the form of a little robot called Monita. She acts as the host of Nintendo Land, and all I can say is that if any real entertainer talked to an audience the way she does, they’d be fired within a week. From her droning, monotonous voice to the fact that everything she says seems like a contemptuous demand rather than a suggestion, Monita is vastly unlikable. It’s not as if it’s been done on purpose, either — she has zero personality to justify her hateful tone, it was simply a disastrous attempt to make her sound robotic. What’s worse is that she talks ALL THE TIME. She never shuts up, and her constant annoyance really puts a crimp in an otherwise inoffensive little game. 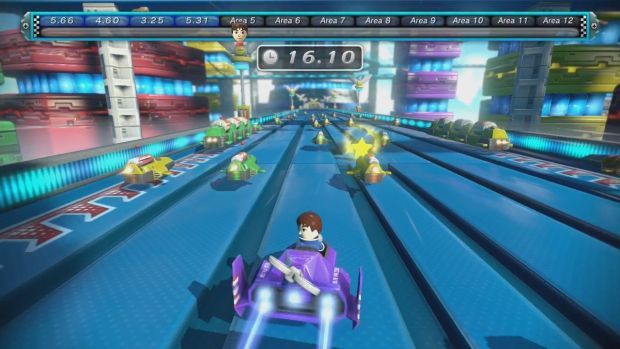 That glaring aggravation aside, Nintendo Land is what it is. It never set out to amaze us by itself, it merely wants us to respect the GamePad, and you can’t really expect much more from a title packed into the Wii U’s box. Even so, it’s worth noting that, unlike so many tech demos, Nintendo Land is still quite fun. It’s not forcing the GamePad’s touchscreen and gyroscope into gameplay that doesn’t support it, and it’s not making established genres less convenient to play with hamfisted new input that doesn’t belong there. Its game selection isn’t compelling to the point of addiction, but it’s all pretty good stuff to snack on.

Those unconvinced about what the Wii U can do would benefit from finding themselves a way of trying out Nintendo Land. It manages to do a lot with the system without, I believe, even scratching the surface of what more focused and dedicated videogames could achieve. It’s a game meant to excite you more about the system you just purchased, and that is what it does. Well worth checking out, at any rate.