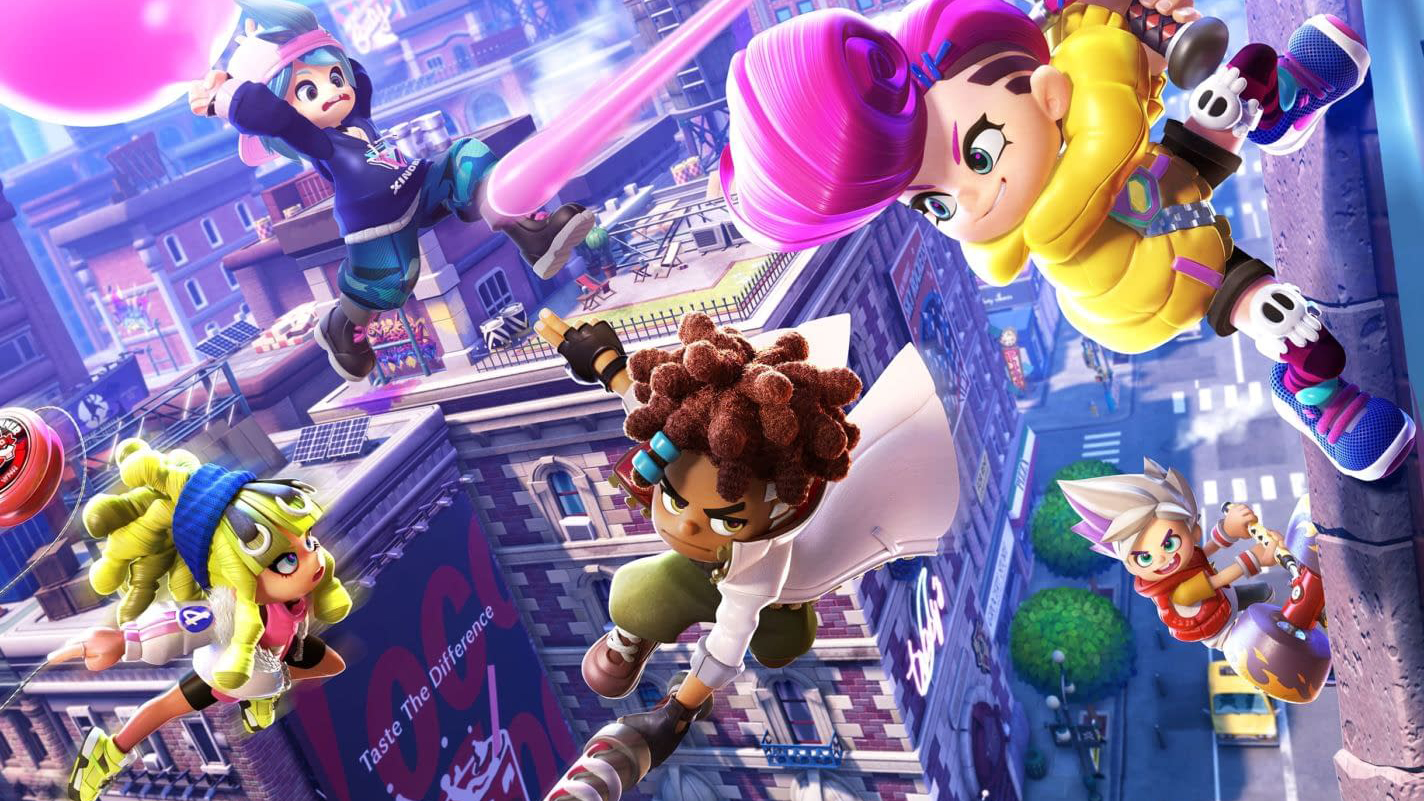 Despite any faults it might have, one thing I cannot say about Ninjala is that it lacks passion. This game has more heart than a Time Lord, and it’s easy to see how much affection went into creating it. You see it in the characters, the art, the stages, the music, the weapons, and the lore. Nothing about this gives the impression the developers weren’t giving it their all to create a game where players can invest themselves in more than just the gameplay.

And that’s for the best because the actual gameplay of Ninjala might be the most divisive thing about it.

Rather than compete with the growing number of free-to-play shooters, Ninjala opts to carve its own path with a brawler-focused online multiplayer game. After choosing your character, you’ll hop right into battle and begin to figure out which playstyle and weapon best suits you. Your choices here have been greatly expanded from the beta tests developer GungHo ran in the lead-up to launch. Weapons are divided into three categories: katanas, hammers, and yo-yos. Each of these categories has four unique choices, such as the drill katana, sushi hammer, or basketball yo-yo.

Each weapon has its own attack style. Yo-yos are designed for long-distance attacks, hammers are great for close combat and when you’re near multiple opponents, and the katanas split the difference as a great all-around choice. My personal favorite ended up being the Scroll Katana, which led to many top-two finishes.

You can discover your weapon of choice by visiting the dojo anytime you like. Here, you can test out the different weapons and how they feel, and familiarize yourself with their unique properties. Each weapon has a special attack, a Gum Shoot attack, and a Gum Ninjitsu attack, the latter of which is tied to a meter that charges throughout a match. Mastery of your special and Gum Shoot attacks will go a long way toward helping you reach the top of the rankings in every match. Of course, there’s always the chance that nothing will work out for you.

Ninjala is the most frustrating multiplayer experience I’ve had this year. I’m at a point now where I’m consistently finishing in the top three for every match I play, but I still find myself rolling my eyes at some of the designs. The parry is the worst offender. When two similar attacks hit, those two players will go into a direction-picking duel minigame to decide who gets the upper hand. To find out how this works, you’ll have to dive into the weeds of the tutorials and even if you have the mechanic figured out, you can be stuck in this minigame for multiple rounds if you and your opponent keep picking the same direction.

These parries wouldn’t be such an issue if they didn’t happen so often. I find myself getting into seven or eight a match, and they can go through several duels before a winner emerges. Or, as I’m wrapped up in one of these one-on-ones, another player will start attacking me. There is a dodge, but it’s not as quick as it needs to be. You also have the S-Burst maneuver. This is supposed to be helpful when you’re under attack but it doesn’t always work out that way. Best case scenario is you wind up in a parry. Worst case scenario is your opponent breaks your weapon. Either way, using the S-Burst drains you of S-Energy, a constantly refilling meter that dictates your usage of techniques like dodge, S-Burst, and more.

The rest of the combat is fine, if incredibly simple. Its two basic attacks are tied to the shoulder buttons, but you can customize your controls and I highly suggest you do. There’s no block button but you can use your gum to block attacks. You can increase the size of your S-Energy meter, and drive up your score, by taking down the various apple-shaped drones found on each stage. Destroy enough of them and you’ll be able to create a larger version of your weapon that can give you the upper hand as the final seconds count down in a match.

I think Ninjala has a solid idea of what an online multiplayer brawler should be, but the final execution is rather chaotic and random. I can be nailing a combo against an opponent only to have somebody sneak up behind me and knock me out in two hits. Depending on the weapons your opponents have, it can often feel like you’re getting hit from every direction without ever seeing who’s attacking you.

This is a slightly less problematic issue in the team battle mode. Ninjala currently has two modes: battle royal and team battle (which you unlock after reaching level five). Both matches feature eight players, though that doesn’t always mean there are going to be eight people fighting. I’ve seen a lot of dropouts during this review period and one team match where it was four on two. My connection has been stable enough that I was never dropped from a match, but I did experience two disconnects from the server outside of battle.

When you’re not fighting, you can spend time in the hub creating equipment favorites you can choose at the start of each fight. Once you pick your weapon, you’re stuck with it for the rest of the match. You can also browse all the different ways GungHo wants you to spend money. Ninjala‘s central currency is the Jala, which can be used to buy its season pass, items from its shop, or gumballs from the gumball machine. The gumball machine will grant players variations of the different weapons for limited time use, such as a black corncob katana or a jewel-encrusted fidget spinner yo-yo. If you played the beta and enjoyed the variety of costumes and accessories, know you’ll have to pay for those now.

The most precious currency, however, is the gold ninja medal. You earn ninja medals as you level up, primarily silver and bronze. You can use these medals to unlock Shinobi Cards, which are cards that can give you an advantage in battle. There are four Shinobi Card slots, but only one is unlocked at the start of the game. The rest have to be opened with ninja medals. If you’re not planning on spending money in this game, get ready to do some grinding if you want to get the necessary gold medals needed to unlock those card slots.

If you are planning to spend money, there is a single-player campaign available for purchase. This four-chapter story features Van, one of the kids you can select as your avatar, fighting Space Ninjas around Eagle City. While it ends with a phenomenal boss battle, the campaign feels like its a tutorial for a completely different game. Some of the issues with the multiplayer, such as the S-Burst and unreliable dodge, rear their ugly heads here, but mostly, the campaign is just a boring way to kill an hour. I mean, one of the missions has you following an enemy character using stealth and it’s as tedious as it sounds.

One thing the campaign does very well is getting the most out of the Eagle City map. Currently, there are just two multiplayer maps in the game: Eagle City and the WNA Academy. They couldn’t be more different. The Academy is condensed with very few places to hide while Eagle City is far too massive for only eight players, but it does give you the best wall-running opportunities. I imagine more maps will be added over time, and I hope the developers will strike a balance between the massive city and this scrunched schoolyard.

Ninjala definitely has the look of something I should be in love with. It’s bright and colorful, and the world-building happening here is genuinely fun. What’s not fun are the poorly implemented mechanics that can ruin the fast and fluid combat. There is a solid template for something great here, and if GungHo can iron out all its wrinkles, it might have a genuine blockbuster on its hands.

[This review is based on a retail version of the free-to-play game. Additionally, the publisher provided the reviewer with eShop funds for the single-player campaign DLC.]