A few years ago, I discovered escape-the-room Flash games and was hooked instantly. Shorter and more compact than your typical point-and-click adventure, escape-the-room games such as Crimson Room are a great way to kill time on a lazy Sunday. It has been my dearest wish that someone would one day bring such games to a handheld.

A couple months back, I came across a Flash demo for an upcoming DS title called Nine Hours, Nine Persons, Nine Doors, or simply 999. The object of the game is to find a way out of a sinking ship by working through a series of escape-the-room puzzles. Was this the answer to my prayers?

I soon learned that 999 was being billed as a visual novel, so the focus on storytelling would be far greater than I had initially anticipated. I don’t recall ever playing a visual novel before, but I doubted one would be able to disrupt my firm stance against the ever-increasing story bloat found in modern videogames. My anticipation gave way to wariness, and I could only hope that the escape segments would be able to carry the rest of the game.

Today, I stand before you a changed man. This one title has made me reevaluate the effectiveness of story-driven games for the better. 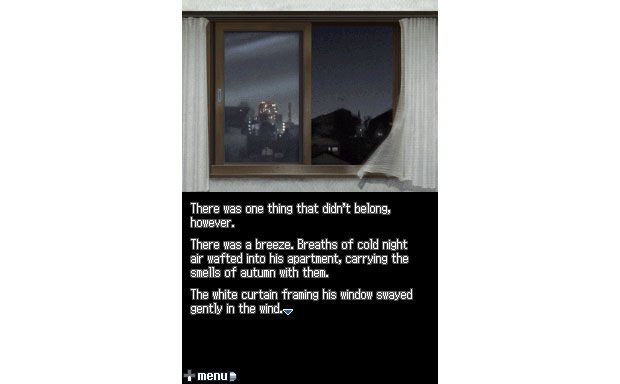 As previously mentioned, 999 is visual novel, essentially a Choose Your Own Adventure book. The “gameplay” almost entirely consists of cycling through page after page of text on the touch screen accompanied by images with limited to no animation on the top. At junctions, you are prompted to make a decision to determine which story branch you’ll follow.

The hook here, of course, is that the narrative is broken up by interactive escape segments. You search a room (or multiple linked rooms) for objects and clues to help you solve puzzles that will unlock the exit. You acquire suspicious items, combine items together to produce new tools, and manage a file of important notes. Some objects in a room don’t get added to your inventory but instead trigger interesting, often humorous dialog between the characters.

Investigation is handled entirely by the touch screen, although there are navigation and menu shortcuts mapped to the buttons for your convenience. You perform a string of individual tasks that can range from the simple — find an empty vase, fill it with water, then use it to put out a fire — to the insidious. A good number of puzzles are math-based, but the game provides a calculator and reference sheets to aid those less mathematically inclined. 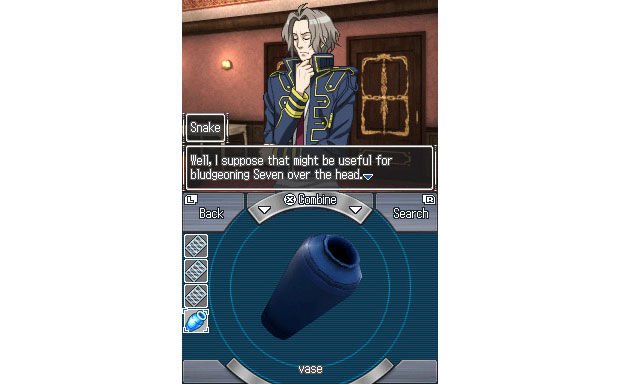 Many of the shortcomings found in other escape games are absent here. Every object you acquire will serve a purpose, so there’s no confusion over red herrings. Every interactive object has a generous hit box, so there’s no hair-pulling over pixel hunting. There are no time limits and puzzles can’t accidentally be made unsolvable. Thanks to the ability to save your progress at any time, you can always return to a room later with a clear head should you start to feel overwhelmed.

In total, there are 16 escape rooms, each of which can take roughly half an hour to solve on your first run. Once you solve a room, it becomes available for replay on the main menu. That’s quite a lot of content for a game in which such segments only comprise a fraction of the experience. If you buy it just for the puzzles, you will be more than satisfied.

So why are you solving escape puzzles? In 999, nine people awaken on cruise liner out at sea and are informed by a masked figure named Zero that they have nine hours to escape before the ship sinks. They become unwilling participants in the Nonary Game, a life-or-death experiment in which they must seek out nine doors with painted numerals and eventually a door with the number nine. Each person wears a bracelet displaying a digit from one to nine, and they can only enter doors in groups of three to five when their combined bracelet values yield a digital root that corresponds to that door number. If they break any of the rules, the bracelets will trigger bombs within their bodies.

To my surprise, the story is phenomenal! It’s like Saw if it were written by Michael Crichton. It’s a fiction-as-fact mystery brimming with moment after nail-biting moment. Truthfully, the story has no choice but to be good, considering that many of the novel sections can run over an hour. The length doesn’t matter because it’s such a treat, not to mention a damned miracle, to read competent game writing for once. 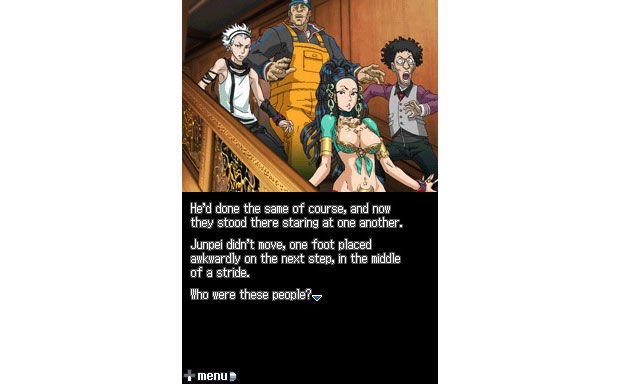 You explore the ship through the eyes of 21-year old college student Junpei. As he comes to grips with his present, he joins up with the rest of the captives, all bearing code names to mask their true identities. Everyone must play Zero’s sick game while trying to discover the link that ties them all together. At first, these individuals seem like your stock anime cast. There’s the bubbly “Clover,” the slow but gentle giant “Seven,” the big-bosomed older woman “Lotus,” and others. One girl in particular, “June,” is actually Junpei’s childhood friend Akane, who he hasn’t seen in nine years. Once you move past first impressions, you discover conflicted and damaged characters within. As you listen to their stories and personal tragedies, you can’t help but grow to love them.

Ironically, I believe the reason why it’s easier to relate to these people and become immersed in their world is that the game delivers narration through written prose as opposed to carefully directed cutscenes. Absorbing the details and allowing imagination to run wild has a greater impact than an animated scene that would most likely be rife with ham-fisted voice acting.

For example, twice do the captives discover a corpse that had been blown apart by a stomach bomb. The narration goes into great detail describing the carnage, right down to the colors and consistencies of the various bodily fluids running down the walls. The still images never show the bodies directly, but these descriptions were enough to make me feel queasy and uncomfortable. And I’m not the kind of person who is bothered by special effects gore in film! 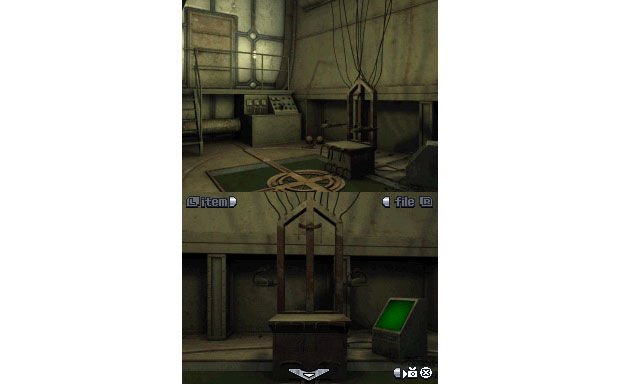 I applaud composer Shinji Hosoe for creating a masterful score that really gets under your skin at the right moments. More than the music, I have to give props to the Aksys localization team for not only capturing the mood flawlessly but also injecting some funny dialog to lighten the mood. My favorite moment has to be when June expresses concern about entering an elevator that descends to a level supposedly submerged underwater. Junpei mistakes her fear for hesitation with being alone with a boy and possibly, as that old Aerosmith song goes, going “down” in an elevator.

There are six endings in total, most of which involve the deaths of everyone on board, but half the fun is discovering all possible conclusions. When you restart the game, your previous prompt selections are grayed out so that you’ll know which choices haven’t been made. You can also fast-forward through novel sections you’ve already read, although after repeated playthroughs you’ll wish you could just hit a single button and skip to the next junction or puzzle automatically. Replaying the game is also the only to visit all the escape rooms, and you will have to go through some rooms multiple times. Chances are you’ll remember the solutions to those rooms and be able to breeze through in mere minutes.

What ultimately takes the game over the top are the discussions you carry with your fellow captives. Every so often, something will remind them of a curious piece of scientific lore. At first, these topics about the curse that sunk the Titanic, glycerin crystallization, morphic resonance, and more seem random, but as you venture down new story branches, you’ll start to notice the common thread and the grand mystery will slowly unravel. I guarantee that you won’t be able to guess how it all sorts out.

You must trigger a specific false ending before you’re allowed to go for the best ending. The reason for this is one of the biggest surprises in the game. Without spoiling anything, the game is able to take the very nature of the multiple-ending visual novel genre and weave it into the narrative in a way that makes perfect sense in the context of the story. Beyond that, the game’s final revelation is so mind-blowing and is executed so brilliantly that I guarantee it will stick with you for as long as you play videogames. It’s something that could only be possible on the DS, and my heart leapt when it happened. 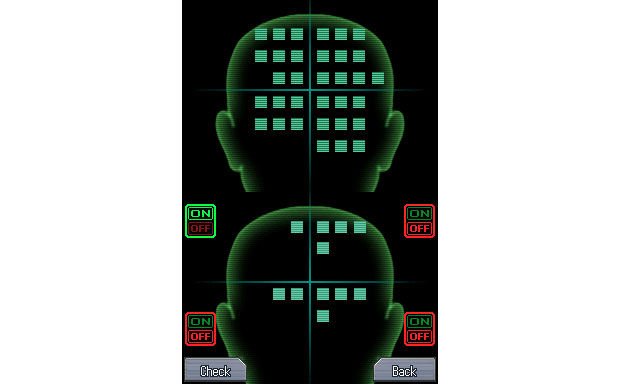 To give you an idea of just how engrossed I was in 999, I stayed up past 5 AM several nights in a row plunging down every possible avenue. I don’t know when was the last time I was so fascinated by a game, especially one as story-heavy as this. When I look back at the small list of quibbles — having to repeat escape rooms and fast-forward through text on subsequent runs — I can’t honestly say that those faults detracted from the overall experience in the least!

The puzzle portion of Nine Hours, Nine Persons, Nine Doors is substantial and enjoyable enough in its own right, but it’s the story that keeps you hooked. Here is proof that videogame narrative can be everything we wish it could be and more. It gets you thinking, pulls at your fears and emotions, and hits you with a few perception-altering twists. What else can I do but give this game my highest recommendation?