Full disclosure: I missed out on NiGHTS when it was originally released on the Saturn. I had the demo disc, but never played it, and the PlayStation 2 release never hit North America. Now that it’s available via download on console, I figured I’d take a crack at it and see what all the hype was about back in the day.

I was not prepared for this game. 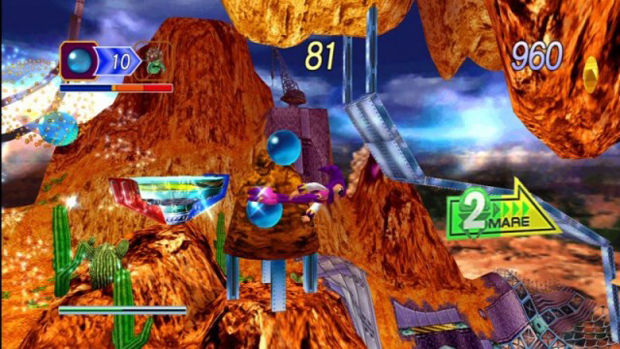 If you were to ask me what NiGHTS was about (without me having read the plot already) I would tell you that I couldn’t answer that question — as I haven’t done nearly enough LSD. The game’s lack of voice acting or text crawls leave much of the story to your imagination, and I’m fairly certain that your first playthrough will leave you wondering if you may already be on hallucinogens.

Thankfully, an in-game menu explains that two children, Claris & Elliot, have been transported to the dream world of Nightopia, and had their ideas — sorry, Ideyas — stolen from them. They then enter a temple at the top of a hill and turn into the character NiGHTS in order to fly around the dreamscape and gather orbs. Gather 20 orbs and fly into the capture point to complete that level’s “loop”; each level has four loops and then a boss battle. There is a time limit in which you must gather the orbs and enter the capture point: if time runs out, you turn back into one of the children and must clumsily run back to the temple to once again become NiGHTS.

Playing the game in an exercise in patience. There’s not really any danger when flying around as enemies are few, they don’t really cause you damage, and they are easily dispatched by looping around them or even flying into them at speed. There’s also the “loops,” or courses, of the levels themselves. At first, I figured I had full three dimensional control and could fly into the background where I saw orbs just waiting to be collected. Alas, I had to follow the linear path of that particular level’s course. It’s not as if the levels are on rails — far from it. You can fly forward, backwards, and up and down. However, each “loop” of the level has a set path which you must follow until 20 orbs are gathered. Once that is done, and you return to the capture point with them, the path changes for the next loops and you can pick up the next 20 orbs along each different path.

If I hadn’t (eventually) read the in-game manual, however, I never would have known this. I spent several times running through the levels, grabbing orbs only to run out of time, turn into a kid, and run back to the temple to do it all again. When I finally made it to the capture point and advanced to the next loop, it was purely by accident. Not exactly a game you can just jump in and play, as the game itself tells you nothing of what’s going on. 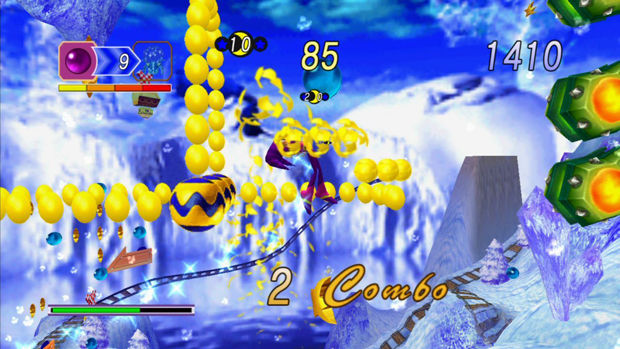 After four “loops”, the level is essentially done. The actual act of gathering the orbs presents no challenge. The real trick is to do it fast enough to outrun the timer, though other than a bit of backtracking along the path to find orbs, nothing too difficult. The challenge, then, lies with the boss “battle” at the end. Each boss character is different, and the trick to defeating each is never explained. For example, one boss has you grasping the enemy and chucking it repeatedly towards the end of the level (something you can also do with foes should you get tired of looping around them). Another has you just speeding into them with a trigger press in order to deplete an invisible health meter. NiGHTS apparently likes to keep you in the dark as much as possible. Again, patience pays off, as I found myself getting frustrated with the game’s total lack of communication with the player, but found my way through each boss encounter after much trial and error.

All that said, though, it’s still an interesting game. It is clearly just all about perpetual motion; the need to keep moving, but not really existing as a “race” game. In fact, it’s hard to describe exactly what NiGHTS is. Item collection, flight, and boss battles seem like standard fare for most titles, but here the presentation differentiates it from all others. It’s a very chill title, one that doesn’t stress the player out with extreme difficulty, but rather it gives you a chance to fly loops, spin through hoops and just generally float on until it’s boss time. Despite the lack of dimensional depth, the game controls very well, and trick maneuvers such as speed boosts and loop-de-loops are all easy to pull off, with only the occasional frustration of being stuck on the linear path on autopilot in certain sections (like when flying through tunnels or the like).

For some, this is what makes the title so appealing. For me, however, the initial frustration of not knowing what the hell was going on made me quick to want to write the game off as garbage. I didn’t know what the point of each level was, and therefore, I wasn’t having fun. And even once I did figure it out, I approached it like every other game, which given the game’s unique flow, also wasn’t right. I didn’t have fun when I didn’t understand the game, and I didn’t allow myself to enjoy the game once I finally did. 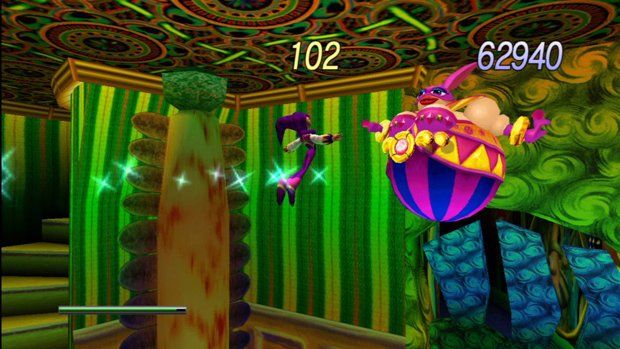 Graphically, it’s bright and the details pop a bit, especially with the HD coat of paint. Cartoonish character designs and garish costumes offset the twists and turns of each level’s layout. The look is definitely dated, though — when on the ground as one of the children, the static, almost robotic movement of walking shows the game’s age. Apparently, this is also a port of the PS2 re-release, as there are options for the original Saturn version of the game, and the Christmas NiGHTS game is featured as an unlock bonus, as well as galleries, artwork, and interviews. The music may tend to grate on the nerves, however, as the menus feature a circus-like series of tunes to match the look of the game. In some levels it’s tolerable, but I found myself putting on my own music when playing.

I must admit, the first time I played NiGHTS, I hated it. I had no idea what I was doing, what was going on, or why I should care. Even now, after knowing this, it still gets a raised eyebrow from me. However, I’m starting to respect that this is just a unique title that kind of defies description. Once I knew what I was doing, I actually found myself enjoying it slightly. Granted, not enough to play it for a very long stretch, but it’s certainly eye-opening when compared to everything else available, and a title worth playing at least once just to see what everyone was going on about when the game debuted in 1996.