The best Platinum joint since Bayonetta 2

You don’t hear many people talk about the Drakengard or NieR series. It’s pretty well-known in some circles, but others are mostly just aware of it through silly boar riding and fishing .gifs. 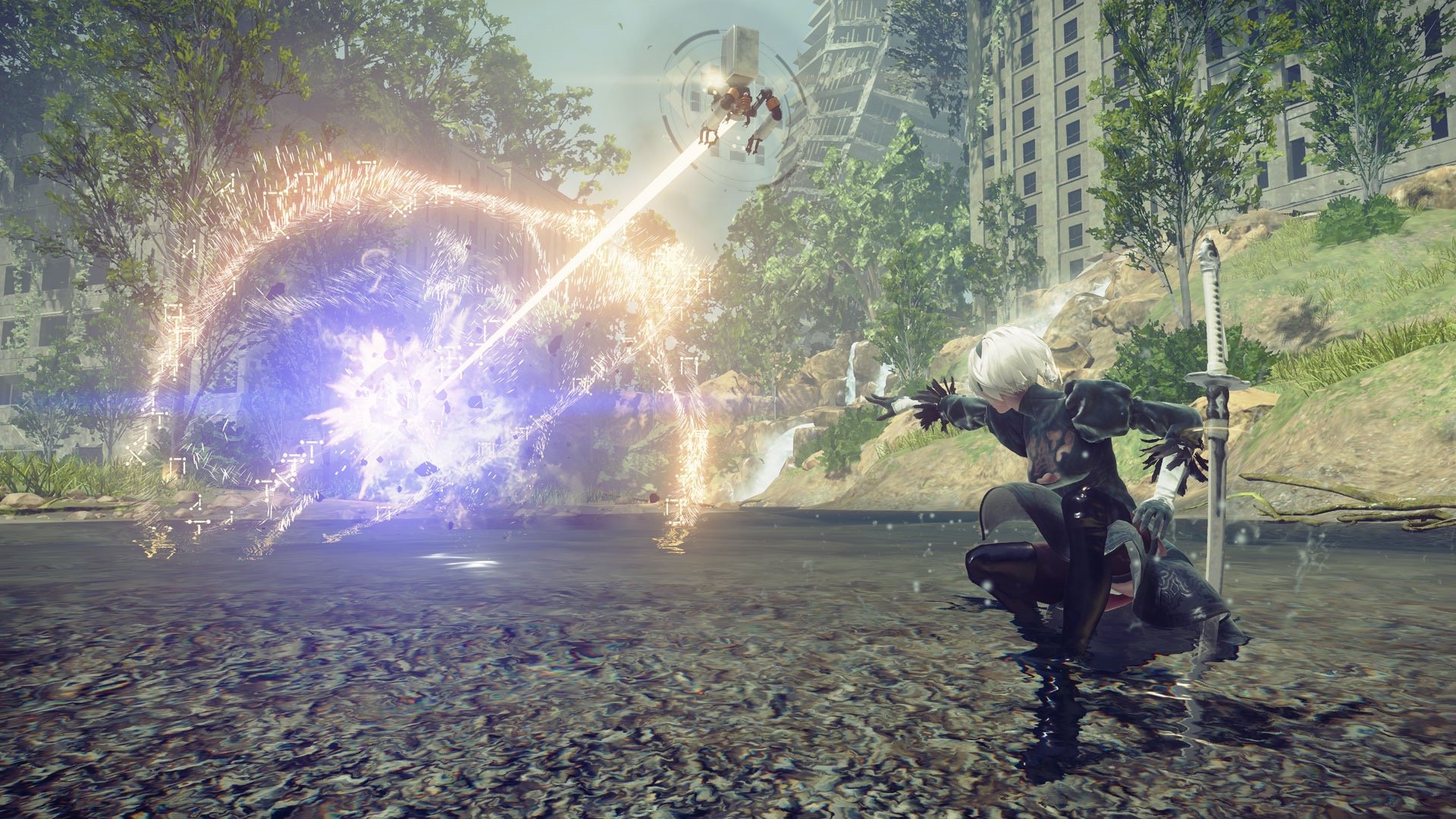 NieR: Automata is technically related to all of its predecessors in the two aforementioned franchises, but it’s not necessary to have played through or even read the synopsis on them to pick it up. The gist is that you’re in a post-apocalyptic world where aliens have invaded Earth, sparking a conflict based on machine warfare and pushing humanity to the moon. You’re part of an elite force of androids that are tasked to fight the machines (and by proxy, the aliens), and save humanity.

But Automata is so much more than a generic intergalactic struggle. It actually takes place hundreds of years after the aliens have taken over, so the Earth is dilapidated and mysterious. You’ll unravel the finer points of what happened on the planet’s surface, as well as the relationship that aliens, humans, and androids all have with one another through the passage of time. Naturally it delves a bit in what it means to be an android or a machine, and the nature of humanity itself.

While elementary at times, the interaction between the characters sell it. It’s a great idea to equip the androids with emotions as a story conceit, as it allows for more interesting developments between the cast. 2B, the android protagonist, is stoic as hell which seems like a boring character trait, but ends up working well when juxtaposed to 9S, her silly companion. Many of their conversations end up playing out like a classic comedy duo on top of some of the more grave matters that the narrative touches on.

While looking at screens it’s easy to judge the art as somewhat dull, but in practice it’s beautiful. The open world skyscrapers look mesmerizing, as do most of the other areas, which are surprisingly vibrant fonts of life. It’s all rendered in 60FPS consistently too (on a PS4 Pro), which is naturally a godsend when it comes to the frame-perfect action, but also bolsters the general sense of awe when running around doing nothing in particular.

In true Platinum fashion, everything is just so stylish. 2B doesn’t just climb down ladders, she slides down the side of it. Pretty much everything from her slow walk to her dodging animations look unlike anything else in the action space, and even top Bayonetta 2 in some ways due to the framerate and advancements made since the Wii U.

Now, I wouldn’t say the combat system is the studio’s best work, mind. It’s fast, responsive, and the bosses put up a fight, but the combo system isn’t nearly as deep as some of Platinum’s other games. That said, it’s impressive all the same because of the sheer amount of weapon choices you have, the instant weapon set swapping mid-action, and the integration of shooter elements with “Pods,” or, little floating robot helpers. There are times where I’m throttling all four shoulder buttons (lock-on, Pod power, standard shot, and dodge) all at once — which is so much more involved than your average action game. 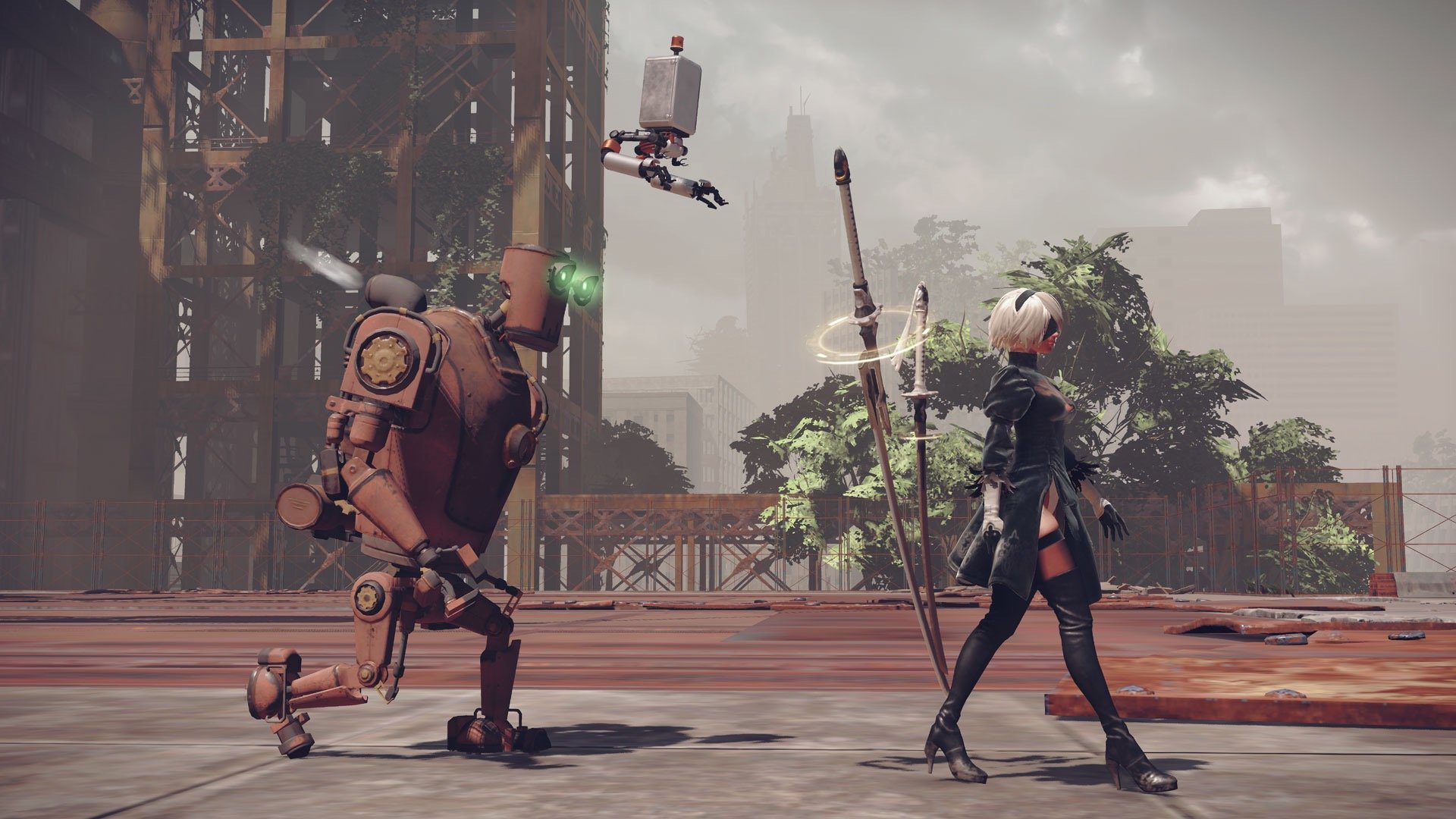 Platinum’s strength is that it knows how to handle just about every form of combat. Bosses are formidable and feel like actual boss fights, and when they throw hordes at you, it feels insurmountable. You know how in a lot of other games there’s situations where it feels like you have to lose to trigger a cutscene, but you end up just getting a game over screen instead? There’s many of those moments in Automata.

It’s tough, especially on the harder difficulties (which shut off lock-on), but manageable. You can upgrade your character with a fairly in-depth chip system (where you can attach minor stuff like “more HP” all the way up to “recover health when damaging or killing an enemy”), which lets you alter your build to suit your playstyle. You can customize your HUD to your liking, or if you’re so inclined, swap to an easy-automatic mode that has its own chipsets and abilities.

I have to warn you, the enemy variety fits the theme, but it’s not going to be all that exciting at first. Those rusted robots are most of the fodder you’ll be facing, and even some of the bosses feel like extensions of that design. But! The more you play the more you’ll fall in love with them. They manage to be creepy and cute at the same time, and you’ll see a lot of them in all new ways as you continue through the critical path. Slowly but surely you’re thrust into some real unsettling situations, and they fit right in wonderfully. Still, I wish there was a little more variety at the start. 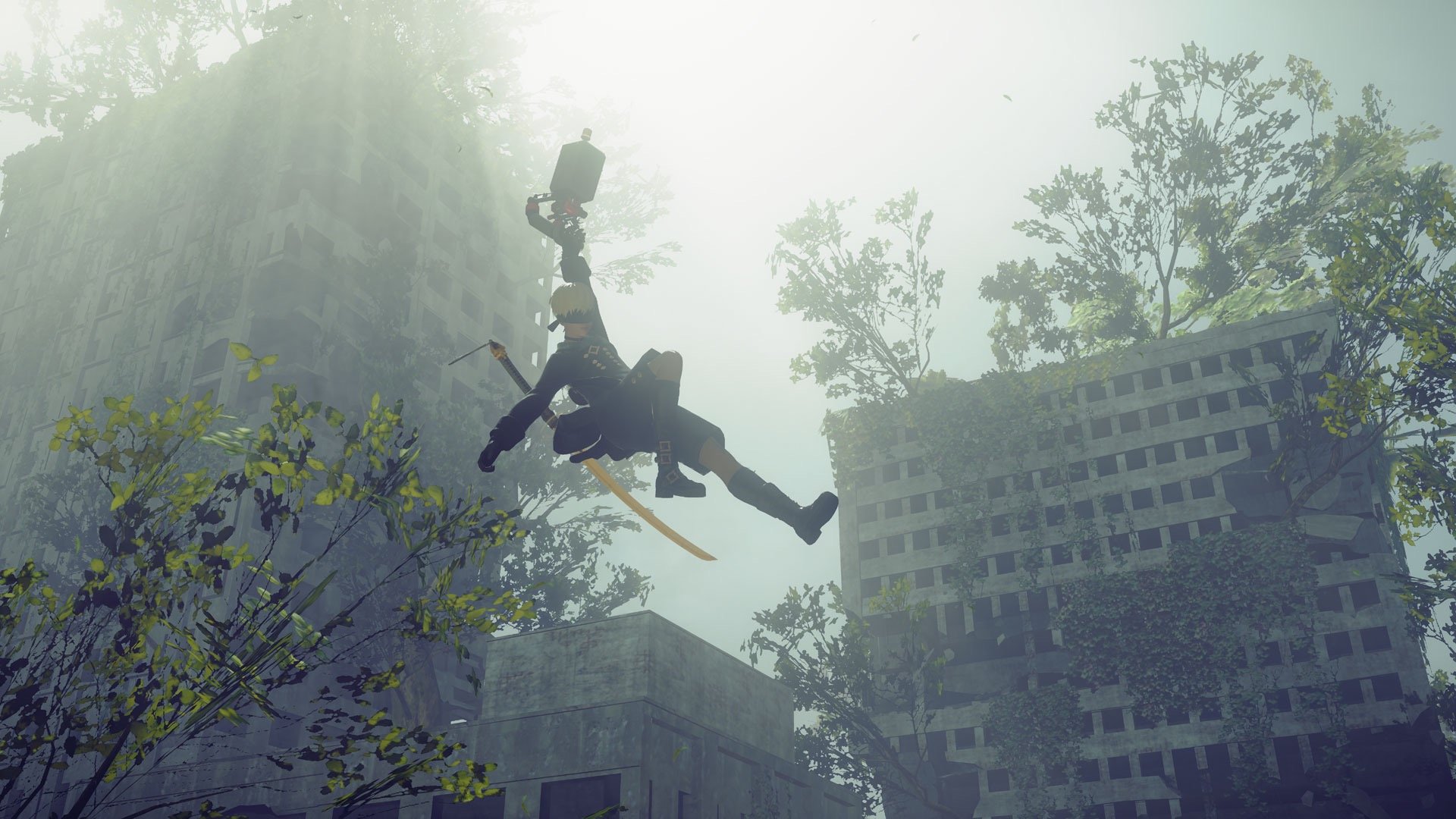 Automata keeps up the pace without getting hokey. There’s shmup sections that operate like a spiritual successor for Ikaruga, with bullet hell bosses. As you make your way through the story you’ll also see more mechanics work their way in, including hacking minigames that are short and sweet, and don’t get in the way. Action scenes frequently shift between the typical 3D view to a 2D platformer to a top-down shooter with a clever use of camera work. Oh, and there’s a roller coaster ride, fishing, animal mounting, and sidequests that feel impactful with their own miniature stories, backed by great writing.

The flow is basically that of an open world game, with spokes on that giant wheel that filter into linear story missions. One playthrough should last you around 15-20 hours, which for me, is pretty much the perfect amount of pacing for a game like this. Nothing is dragged out, and the world isn’t padded for the sake of it. Yet, you can get a whole lot more if you’re up for it. Endings unlock extra New Game+ options (I got ending A, the first of many endings that continue the story — and earned a “voice changer modulation setting,” among other bonuses) and scenarios. I ended up loading my completed save file and found myself in a unique section of the game I had never seen before, and subsequent endings are so mind-blowing that we’ll be talking about them for a while. The vast array of scenarios makes everything unpredictable, and helps showcase the magic of NieR and the brilliance of director Yoko Taro.

If you’re so inclined, you can engage an online mode where you can find other bodies, Souls style, but there’s a slight twist. Now you can not only recover your corpse after death, but you can choose to either boost your stats or “hire” it temporarily as another AI companion on top of 9S. It’s such a small thing, but I loved occasionally bringing in an extra helper and it added a tad more personality to open world roaming.

NieR: Automata is nearly as good of an RPG as it is an action game, which is a mighty tall order. It’s tough to really strike that balance as many action-RPGs tend to favor one element over the other, but Platinum Games, with the help of Square Enix, has tapped into its innate ability to captivate us with combat while keeping the rest of the journey engaging.