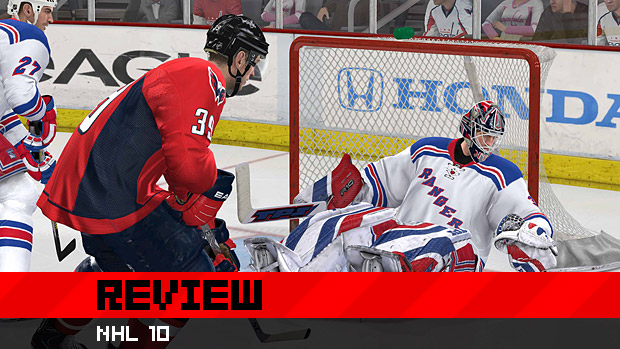 EA Sports’ NHL franchise has a distinguished pedigree — the past two games in the series have earned 19 “sports game of the year” awards from various videogame publications and Web sites, and the games have only gotten better as time has passed. Each year, developer EA Canada has set the hockey bar higher and higher by putting out titles that have been worth buying in consecutive years.

You’d think that the series would be due for a misstep eventually, that it couldn’t possibly keep making strides toward a better simulation of hockey without an off year.

You’d be wrong. Dead wrong — at least in the case of this year’s effort, NHL 10.

[Editor’s note: NHL 10 does not launch until tomorrow; since I was unable to test the game in a real-world online setting, this review does not discuss the game’s online play. -Samit]

Considering that EA Canada debuted two series-defining game modes in NHL 09 last year — Be A Pro and the EA Sports Hockey League — it’d make sense to assume that the dev team would focus on refining gameplay this time around. They’ve done so, which has resulted in the most realistic hockey game ever made, but they’ve also managed to squeeze in a couple of new modes to keep gamers engrossed in NHL 10 for a long, long time.

Hot on the heels of Be A Pro comes Be A GM, which places you in charge of maintaining a team’s roster and putting together a Stanley Cup-winning group of guys year after year. You can either take control of a team of your choosing, or start from scratch in a fantasy draft with the entire NHL player pool available to pick from. Be A GM is a goal-oriented mode; the game presents you with tasks to complete or shoot for, and getting them done will earn you points that can be spent on upgrading your staff, which will allow you to do your job more easily. For example, you might be asked to free up between $500,000 and $1 million of room under the salary cap in a trade, or make offers to two free agents.

You can still play games in Be A GM, but the focus is on building a solid team. A major factor is your GM Reputation, and most everything you do will affect it. To keep it up, you’ll need to be fair and just — signing free agents only to trade them away or lowballing potential trade partners with insulting offers will bring the rating down into the negatives. Trades will also depend on your reputation with particular teams. The Rangers, for example, will have a tough time working out deals with rivals like the Flyers. The CPU trade logic is impressive in its variety and specificity — teams rejected my trades for reasons like “we’re not willing to give up our young wingers at this time” and “we don’t want to take on players with 1-way contracts.”

If that was unintelligible gibberish to you, fear not — NHL 10 is replete with detailed tutorials to explain such nuances as the finer points of salary cap management (as well as just what a salary cap is). Like its predecessor, the game begins with an interactive tutorial that takes players through gameplay basics such as right stick shooting and an all-new mechanic for the series, boardplay. Just like in the NHL, you can now tie up players along the boards and try to wrestle the puck away from them. And if you’re pinned on offense, you’ll be able to pass the puck out to your AI teammates. Boardplay completely changes the flow of the game — most hockey videogames have been based upon generating shots off the rush, but boardplay shifts the dynamic to a game that’s more conducive to actually setting up in the offensive zone and moving the puck around, which more closely mirrors real hockey.

At long last, gameplay sliders have returned, allowing you to tweak subtleties like “CPU One-Timer Accuracy.” Unfortunately, the bars aren’t granular enough; where you’d usually be allowed to adjust on a scale of 0-100, the sliders in NHL 10 move in large chunks, offering less control. And maxing them out didn’t produce a massive deviation from the norm, although there was certainly a palpable difference. On the plus side, however, included in NHL 10 are “game styles,” which are slider presets that do a great job of allowing you to customize the seriousness of your gameplay experience from arcade to realistic simulation.

Four styles are available: Casual, Default, Normal, and Hardcore. These affect how the game plays, but the game style is independent of difficulty (e.g., you can play Casual on All-Star difficulty). The styles are analogous to settings in racing games in that as you go up the ladder, more and more assists are turned down (or off, in the case of Hardcore). Casual provides a very arcadey and fast game, where checking has a high degree of “magnetism” between players. But you’ll have a devil of a time lining up hits on Hardcore, and the game speed is turned way down to more closely approximate the pace of a real game.

A major gameplay element that the styles affect is passing. Last year, players complained that it was too arcadey, that passes were too “tape-to-tape.” Now, on Hardcore, gamers will have fully manual, 360° passing to contend with. The left stick controls the direction of your pass, and its speed is determined by how long you hold down the pass button. For the people who can master it, this offers precise control — you can lead players or bank the puck off the boards. And since passes are less accurate in NHL 10, you’ll have to be wary of defenders, who are much smarter. They have the awareness to take away the cross-crease feed the majority of the time. Goalie AI is significantly improved as well, and it’s helped by a myriad of new save animations. You won’t see them diving in desperation to the other side of the net on a crossing pass anymore. And EA Canada also eliminated every single “money” goal from last year that I tried.

The other new gameplay mode is Battle for the Cup, which lets you take on any team in a one-, three-, five-, or seven-game series for Lord Stanley’s Cup. For the most part, it plays out like a typical playoff series, but it offers an enhanced presentation thanks to the inclusion of storylines and matchups before each game. The game will show the two starting right wingers’ stat lines, for example, or display a screen with something like, “Can the Rangers make it two shutouts in a row?” It’s trivial, but useful for a glance at how a series is going. You can also jump into playoffs or start a new season from the main menu.

Be A Pro returns mostly unchanged, except for how it begins. Once again, you can join any NHL team, but if you have no particular allegiance, you can put yourself up for grabs in the NHL Entry Draft. First, though, you’ll have to do your best to impress scouts in the Prospects Game; your draft position will rise and fall based on how well you perform in it. Alas, you can’t import your NHL 09 Be A Pro player. That would’ve been truly awesome, but maybe it’ll be possible next year. The last new feature in NHL 10 is first-person fighting, which I found rather gimmicky — it’s no Fight Night Round 4, to be sure. But it’s definitely better than past incarnations, which usually devolved into mere button mashing, and if you win a fight, your lines will get an energy boost. You can even engage in post-whistle shenanigans that can develop into a fight.

Something that NHL 10 captures brilliantly is the emotion and atmosphere of an NHL arena. The crowd makes its presence felt, whether you’re dishing out big hits or struggling to score. It’s great to see fans banging on the glass when a player is sandwiched against the boards, trying to get rid of the puck. And PS3 owners will finally be able to literally feel that stuff — NHL 10 includes all the amenities of the 360 version on the PS3 this year, such as vibration, Trophies, and even custom soundtracks (NHL 10 is the first EA Sports game to have this feature on the PS3). Unlike MLB 09 The Show, though, you can’t incorporate your own songs into the game’s soundtrack; you have to choose between your music and the EA Trax songs that come on the disc.

After the spectacular game of hockey that NHL 09 offered, I was apprehensive of NHL 10, worried that EA Canada would be unable to outdo itself yet again. I’m happy to say that those fears were unfounded, and by now, I really should just trust the NHL development team to bring its ‘A’ game all the time. NHL 10 is EA Sports’ best hockey title yet, offering considerably improved gameplay and another hour-eating mode in Be A GM. I played two games of NHL 09 at a friend’s house last night, and I found it difficult to go back; I felt hamstrung by its lack of boardplay and precision passing. That alone should tell you that if you’re a fan of the NHL series, or hockey in general, you need to pick up NHL 10.