A cursory glance at Upper One Games’ Never Alone, while sure to impress, won’t do it justice. Its appeal is obvious, but its intention is buried shallow under a light dusting of snow. But, it’s that intention that transcends Never Alone from another gorgeous 2D platformer to a game of great importance.

Never Alone is the rare example of a title that aims to bring culture to its audience without forcing it upon them. It skirts the oft-annoying “edutainment” category by being a game first and foremost, but is nevertheless adept at instilling a sense of curiosity about history and beliefs of the people on the screen. The execution is undeniably flawed at times, but not enough so as to undo what it strives for — to teach, and to make that process enjoyable. 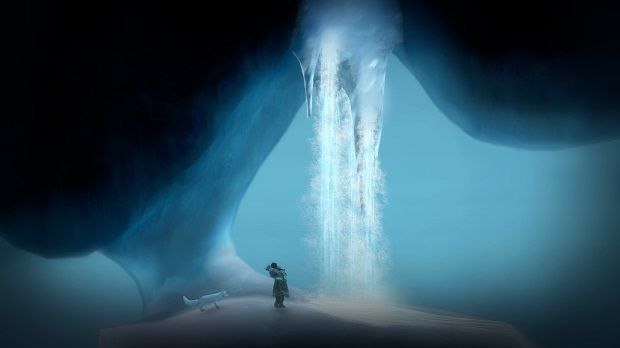 To truly appreciate Never Alone requires a rudimentary understanding of how the game came to be. The Iñupiat, an Alaskan indigenous people, believed that a part of their heritage was being lost and ignored by their youths who were seemingly more interested in social media and popular culture than their own culture. Rather than lament the emergence of the digital age, the Iñupiat embraced it and decided to create a videogame that would convey part of the message they wished to pass along to the younger generations. The resulting effort is Never Alone — a side-scrolling puzzle platformer that’s incredibly warm while also relentlessly frigid.

Set in the brutally cold Alaskan tundra, Never Alone tells the tale of Nuna, an Iñupiaq girl, and her pet fox. Her village constantly tormented by a never-ceasing blizzard, the duo sets off to find its source and potentially stop it. Along the way, they encounter the likes of polar bears, sky spirits, and little people with superhuman strength.

While the dangers presented are a wonderful melding of Iñupiat mythology and traditional arctic perils, Nuna and her fox strike a contrast in that they are a constant source of radiant warmth. It’s nigh impossible to not be endeared by the couple’s animations, each and every jump and ledge grab somehow more cute than the last. As the fox leaps effortlessly over a gap, it’s reasonable to think that it’d be better off cuddling with you in front of a fireplace than stuck in this snow storm.

Although they never speak, Nuna and fox manage to establish themselves as lovable characters through their mannerisms, determination, and dependence upon one another. Each equipped with their own limited skill set, it’s apparent that the journey would be impossible alone, both halves proving essential. Fox has the abilities to scratch his way up walls to drop ropes, and to interact with spirits to materialize platforms out of thin air. Nuna gets a bola early on, which she can use to whip projectiles at icy impasses and to provoke polar bears.

Their relationship feels like more than a mutualistic agreement, however. It feels like a legitimate friendship, which makes it all the more heart-wrenching when a fail state zooms in on the bereaving partner overcome with agony, just lying emotionally helpless in the snow. Anyone looking to escape this sentiment will be hard-pressed to, as Never Alone‘s platforming prowess (or lack thereof) makes failure an inevitability.

Described by the developers as “more Limbo than Super Meat Boy,” Never Alone has that imprecise platforming quality about it that can be frustrating and distracting at times. It’s not much of a problem during the early going, when obstacles are bested by simply jumping over them. But, during chase sequences or when navigating chasms through the wind, it leads to many unnecessary missteps that require a do-over. It’s not like these sections end up being too repetitious, though; Never Alone is incredibly gracious with checkpointing, as almost every small chunk comes with one once it’s passed. 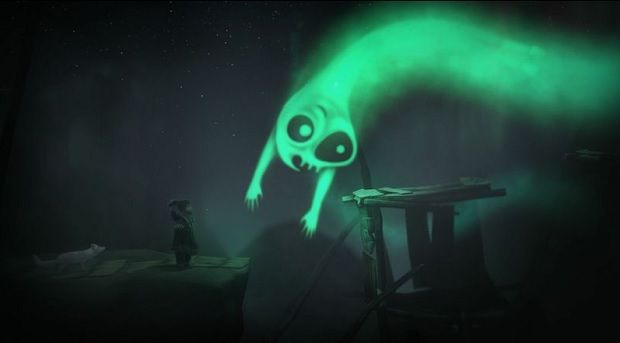 Even though controlling Nuna and fox can be tricky at times, Never Alone offers little in the way of actual challenge. The solutions to the puzzles that litter the landscape are almost always immediately recognizable, and the ones that offer new features are expounded upon and altered later in the game. Playing alone presents a bit more in the way of physical dexterity, as it requires switching between characters; although, cooperatively taking on Never Alone feels more like the exercise in teamwork that it was designed for.

All of this, as fundamentally flawed as it may be, is easy enough to look past. However, Never Alone‘s most sincere weakness is an unlikely issue — it’s simply too short. Just when we’re getting comfortable with the dynamicism between Nuna and fox, just when we start to truly care about them and their journey, it ends. Even if it’s more of a quick lesson than a deep-dive, Never Alone‘s undoubtedly hindered by the speed with which it tells its story.

Supplementing the gameplay are two dozen cultural insight videos, which are unlocked through progression (although, it could be argued that the game supplements the clips). These short documentary-style videos serve to elaborate or shed new light upon subject matter that had just been reached in the game, and may very well have been Upper One’s underlying focus in development. Their presentation somewhat disjointed from gameplay and sometimes only tangentially related, these clips are entertaining and accomplish exactly what they set out to do — to inform the audience about a culture it is probably unfamiliar with.

Never Alone is only the first entry in an initiative by E-Line Media to create a series of world-culture games. It’s an important step for a medium that’s all too often stuck in its own familiar ways. Sure, Never Alone is far from perfect, but its highs are much more significant than its lows. Rarely is an experimental take flawless, and that’s the case here. But, hopefully everyone involved can take what’s on display with Never Alone, improve the formula next time, and continue to teach because it’s a fascinating way to learn.