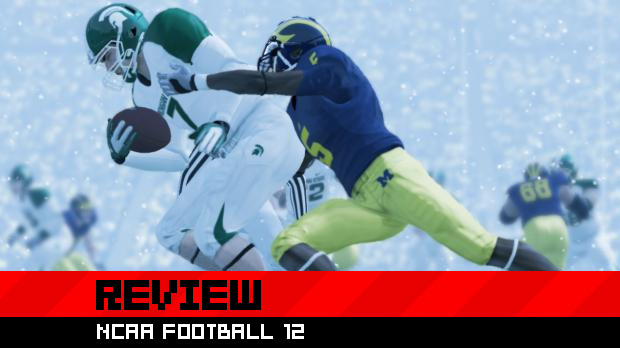 Last year, EA Sports decided to take a some risks, change up a few things and make a pretty darn good college football game. Well, apparently, we liked the experimental title enough that they decided to do something unprecedented: make a sequel!

… Wait, this is a yearly series? And I reviewed it last year, too? Oh.

In any case, yes, EA is putting that NCAA license to use once again with a new version of the popular sports game series. Maybe I should have written that as “new,” though, because … well … you guys know what deja vu feels like, right? 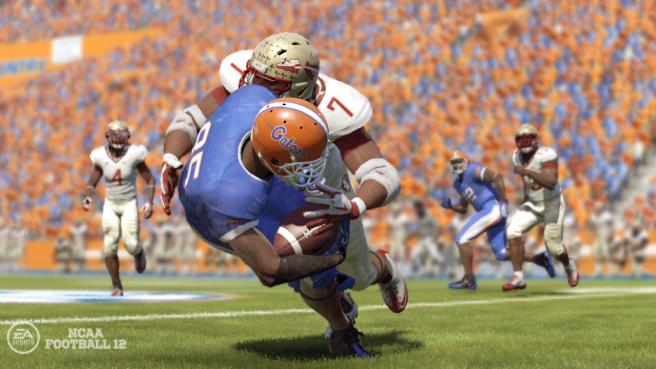 So here we are; another year, another new title in an EA Sports franchise. The good news is since I don’t have to sit here and discuss a storyline with you (spoiler: IT’S FOOTBALL), we can jump right into the what’s new.

So what is new? Well, not the presentation, for the most part. Sure, they’ve upgraded the ESPN branding a bit to reflect how it looks in the real world better and the entire menu system incorporates some bits and pieces of ESPN College Football’s design, but basically, everything’s as it was last year. I guess the old saying is true: if it’s not broke, don’t fix it. 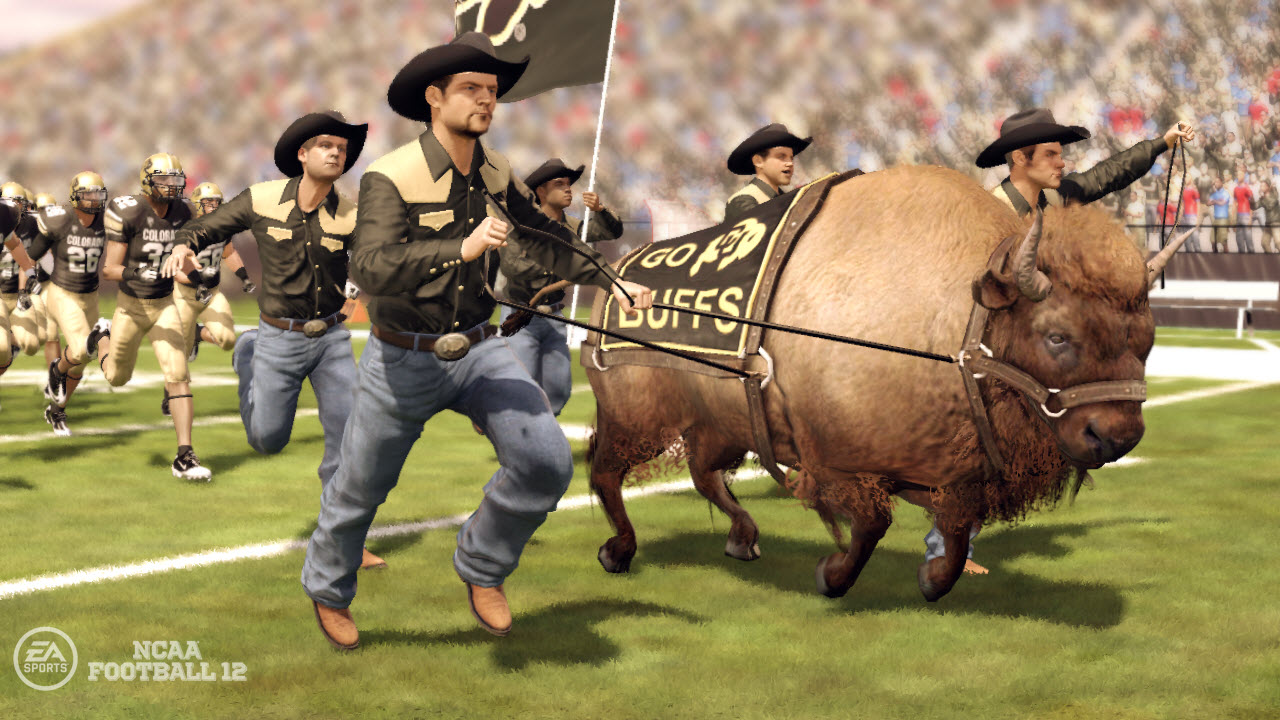 Of course, that presentation also matters on the field, especially with an addition made for NCAA Football 11 — school-specific team introductions. Last year, I bemoaned that some of the classic team introductions like Oklahoma’s Sooner Schooner or Colorado’s Ralphie the Buffalo charging out onto the field were excluded. Apparently EA Tiburon heard my complaints, because they and a host of other entrances using animal mascots are here. Auburn’s War Eagle, Georgia’s famous bulldog Uga, Florida State’s Chief Osceola and Renegade; they’re in the game, as are schools like Oregon and USC. Even some of the smaller schools with traditions, like Wake Forest and Wyoming, are included in the latest batch. Like last year, they’re a great touch and really add to the overall feel of the game as being representative of the college game experience.

They’ve also stepped up the actual in-game graphics a bit, changing the lighting to be more dynamic and better reflect the sun’s position and time of day. Even the grass has ditched flat textures for fuller 3D animation, allowing for little touches such as greenery poking out of the snow during winter games. The good news is, it works and the game is absolutely gorgeous. The better news is that the fans aren’t lost in giant heaps of bloom effects like they were last year either. They are now individually modeled, with deeper stadium effects for a fuller sound, as opposed to using 50,000 fans and doubling the volume, as has been done in the past.

The problem of players clipping through one another is still noticeable, though not as bad as in previous games, and there graphical glitches in replay mode remain troubling. I had the sky disappear on me after one game, leaving me with the eternal blackness of what I assume is the vacuum of space. Sadly, we lost the Kent State Golden Flashes to it, but I don’t think anyone will miss them. 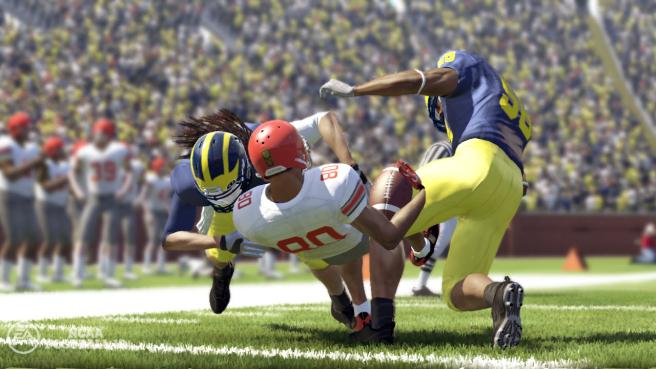 The biggest (and in my opinion, most beneficial) change comes in the form of a much improved tackling system. EA promised that this new system, which uses new animations that begin only when the player makes contact with the ball carrier, would put an end to the dreaded warping, sliding and other graphical glitches that have become the stuff of YouTube legend. The good news, though, is that this isn’t just talk; the system and its new animations deliver on EA’s promise. Everything looks crisp, natural and fluid in animation for the first time … well, ever. Defensive players look like they’re actually making tackles, and as a side-effect, it looks more natural when the ball carrier breaks a tackle on a defensive player.

Also changed this year was the defensive AI, making players in zone defensive schemes able to trade off players and not just stand around in their zone all the time. Again, EA promised this would be improved and make it harder to run short passing routes against the zone, and they delivered. It used to be pretty easy to run crossing routes of 5-10 yards and just keep chaining passes together. This year, my computer opponents were having none of it, even if I had them line up against a bottom-of-the-barrel team like Eastern Michigan or Memphis.

But the more some things change, the more others stay the same. Gameplay-wise, it’s fundamentally the exact same game you’ve seen last year, and the year before, and the year before and so on. The controls remain all but similar to NCAA Football 11, albeit with the tackle button now permanently moved by default to X (Xbox 360)/Square (PS3). Those of you who’ve played an NCAA Football game in the last 2-3 years should have no problem picking this game up and being able to jump right into it. 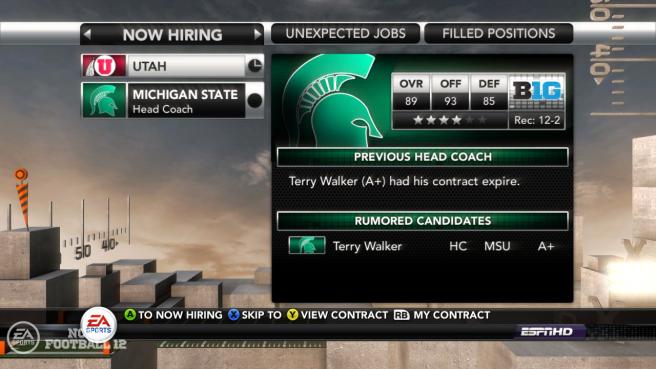 Dynasty mode is polished up a bit for this year, with some brand new features that, honestly, should have been in the game a few years ago. Chief among those is the ability to create custom conferences, allowing you to freely move schools around and make conferences as big as 16 teams. You can adjust schedules, BCS bowl tie-ins, even division names if you so choose to. It’s nice to finally be able to put my created school in a conference without having to kick someone else out.

Secondly, EA’s changes allow you to start off your coaching career as a coordinator, focusing on one side of the ball, and work your way up to other jobs … or try to stay off the hot seat. It’s a fun addition that adds another level of realism to the game, as most coaches start out as coordinators at one point or another. Outside of these changes, Dynasty mode is almost identical to NCAA Football 11 in terms of recruiting, management and so on.

The other main mode from last year, Road to Glory, is back as well, having undergone some rather large changes. The game mode adds a new feature in that it lets you not only start out your career in high school, but play through your entire senior year as well. It’s a nice touch, as playing well in games all year builds up your recruiting potential in a much more reasonable manner than just playing through the state playoffs. Along the way, you’ll be able to add schools to your interest list, and for the first time, you can play on both sides of the ball, allowing you to be recruited at two different positions. This also might mean more offers; Florida, for example, might be looking for a halfback, but Georgia could be looking for a linebacker, and if you play well enough at both positions, you’ll have offers from multiple schools to play on either side of the ball. You can also choose to skip this part if you want and get to the meat of Road to Glory if you want: your collegiate career. 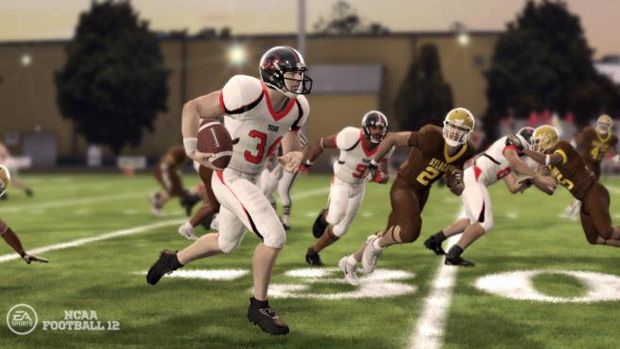 This area, too, has undergone quite a bit of change: you still have to compete for your spot and can move up and down the roster, as well as be challenged by your teammates if you’re a starter. Additionally, doing well in practice will garner trust from your coach and allow you perks during the game, like the ability to call more audibles as the coach becomes comfortable with you at quarterback, for example. You also gain experience points that you can spend on temporary stats boosts.

However, what gets lost in the changes is the need to balance a schedule between your social life, working out and your studies. Everything’s simply been condensed into one lone practice per week and whatever game you have on the schedule. I assume this was done to make the game move a little quicker, but it’s sad to see it get so simplified that part of the college experience has been taken out. Maybe they just assume that you get “help” to pass all your classes, but I would have liked to see it remain. And heck, while you’re at it, if we’re gonna get some special help for keeping our GPA up to the necessary minimums, can’t we have a special mini-game where we get to drive around in fancy cars on campus while avoiding NCAA investigators?

As far as making the game your own goes, the usual creation and roster management modes are here. TeamBuilder — EA’s online create-a-team page — is once again the only option for making custom teams, so if you don’t have an Internet connection, too bad. New this year is the inclusion of custom playbooks, allowing you to build a selection of plays that best fits your style. It’s a nice addition but one that really should have been a standard for the past few years, especially since I distinctly remember the older Madden games having something like this.

And yes, before you ask, the codes to unlock online multiplayer from last year are back as EA continues to discourage buying games used. Did you really expect anything different? 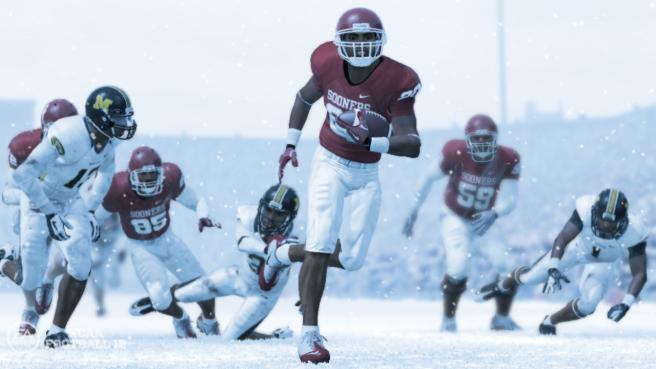 But there’s one thing kept popping up in my head as I played through NCAA Football 12: “It’s more of the same.” Or, maybe to put it more precisely, they could have called this game Super NCAA Football 11 Arcade Edition and it would have fit just as well. There’s plenty that’s been added to enhance the experience of this being a college football game and some (but not all) of the graphical issues from last year’s game have been fixed. Dynasty Mode has gotten long-overdue improvements as well, while Road to Glory has been streamlined (a move I’m not completely a fan of).

It’s basically a slightly better version of last year’s game, which isn’t a terrible thing at all since I loved it, but those of you hoping for anything groundbreaking are probably going to be disappointed. I’ll still highly recommend buying it if you’re a college football fan or if you haven’t played a game from this series in a while, but if you’re content with NCAA Football 11 — and you don’t mind seeing your players slide across the field to make a tackle — then NCAA Football 12 might not do much to change your mind.