Most games based on a licensed property are terrible.

It’s a sad truth of the gaming world, and many players have accepted this as a foregone conclusion. Licensed games are bad until proven good. Merely tolerable licensed games are the exception rather than the rule, and truly good ones are a rare find. 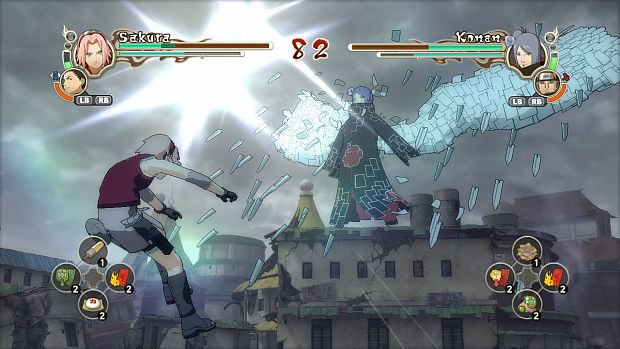 For those unfamiliar, Naruto is a popular Japanese anime series about the adventures and exploits of a bunch of superpowered ninjas with a penchant for beating the snot out of each other. That Naruto Shippuden: Ultimate Ninja Storm 2 happens to be a fighting game could only be appropriate.

And it’s a pretty simple one, to boot. There’s a button for ranged attacks, one for melee attacks, one for jumping around the open arenas, two buttons for summoning support attacks from selected teammates, one for blocking (a well-timed press of which will teleport players right behind their opponents), and one for “chakra”.

That chakra button is the most important one, because it serves as a modifier for any given action in the game. Tap it and tiny throwing knives become really big throwing knives, standard melee attacks become powerful special moves, and slow jumps become instant dashes. Tap it twice, and the next attack unleashes a huge, flashy “Ultimate Jutsu”. Then hold it down to charge all that spent energy back up. 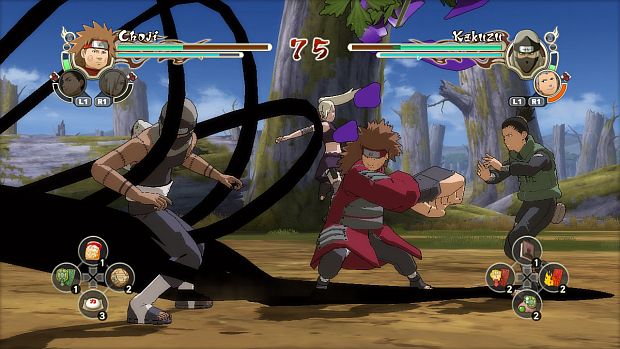 Players of the original Ultimate Ninja Storm game will find the system identical to the first, except with two major additions.

First is the “Team Gauge”, which fills up as support attacks are summoned during the match. With a full Team Gauge, support characters start to jump in automatically, shielding players while they charge, interrupting opponents’ combo strings, or even throwing in sucker punches to set up a juggle. At its highest level, cooperative “Team Ultimate” jutsu can be triggered to up the damage output considerably.

Besides the Team Gauge is the “Awakening”, a temporary power-up mode that becomes available as players suffer major damage. Awakened characters move faster, hit harder, are immune to Ultimate Jutsu. In some cases, Awakening can change a character’s appearance and move set entirely, such as Naruto turning into his Four-Tailed Fox form.

The result is an accessible freewheeling, fighter that moves at a furious, hyperactive pace. The world is shaken and the skies rent with every jutsu spammed. Chaos is at any player’s fingertips, and one need not master the quarter-circle to let it loose.

With forty-four characters drawn from Naruto‘s myriad cast (plus a guest star from Tekken), all with their own jutsus, alternate costumes, and multiple variations of support attack (offensive, defensive, and balanced), it would be more than enough to make for a full dose of fan-service fun. 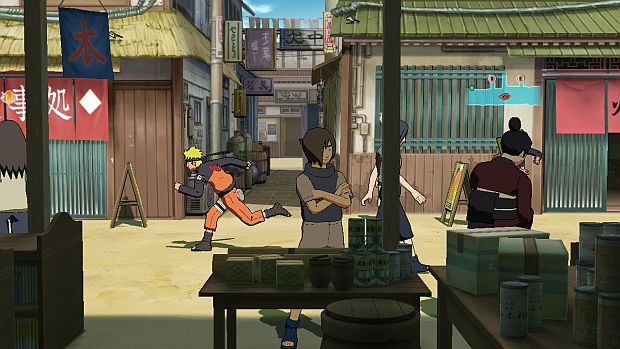 But no. Developer Cyberconnect2 went whole-hog on the thing, stuffing the game to bursting with deep, substantial content, most of it jammed into the game’s single-player “Ultimate Adventure” mode.

The Ultimate Adventure is more than any dedicated fighting game’s story or arcade modes. Following the plot of the first 175-odd episodes of the Naruto Shippuden TV series (yes, that’s one hundred seventy-five episodes), players take control of Naruto and his friends as they barrel from adventure to adventure, complete with map exploration, side quests, fully voiced cutscenes, and shops from which to buy consumable “ninja tools” to use in battle.

And then there are the boss fights (or “guided actions”). Ultimate Ninja Storm 2‘s real party piece, these story-critical duels are heavily scripted and lovingly choreographed. Each is a grand event, going far beyond the typical beat-a-guy-who’s-clearly-cheating fare offered by other fighters.

Of all things, boss fights even include Quick Time Events, where button prompts power spectacular action set-pieces that amp up the on-screen action to further extremes than even what’s actually present in the source material.

Some key fights go so far as to dabble in other genres’ mechanics. One aerial chase scene evokes shades of Panzer Dragoon, and another fight has players holding off a writhing sea of snakes as if playing a rail-shooter’s turret-gun sequence. A few even take dramatic cues from the likes of Metal Gear Solid and God of War. 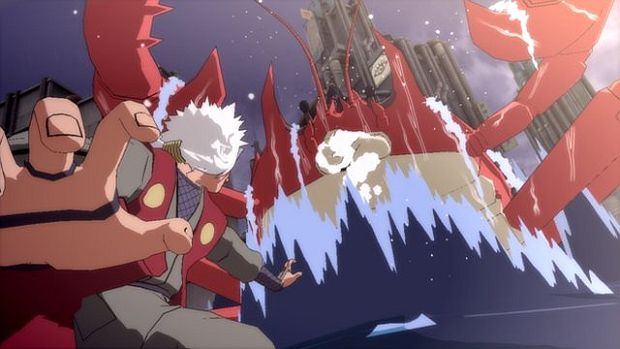 With all of this narrative-driven content, Ultimate Adventure mode is essentially a light JRPG that uses a fighting game as its battle system. Players can grind “Storm Points” to unlock new characters, collect materials to craft new ninja tools, and save up cash to buy cutscenes, music, and pictures to ogle at any time. They can even give presents to other cast members in a rudimentary, Persona-esque “Friendship” system to view special events and quest lines.

Backing all that craziness up are some of the most spectacular visuals available on current-generation platforms. Perfectly implemented cell-shading, fluid animation and flashy special effects make it feel like one is actually playing the show. The splendor only fades during the more static cutscenes, wherein the lower-detail 3D models reveal some unfortunately jagged edges. 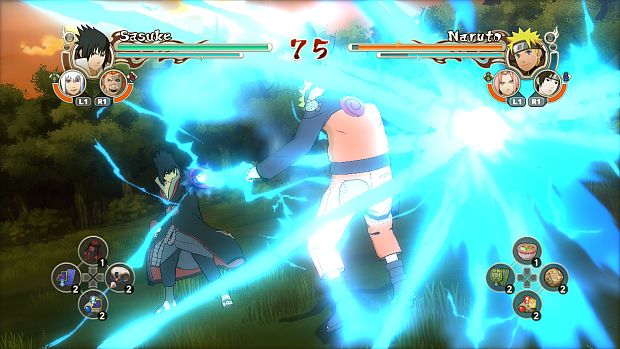 While the Ultimate Adventure is where Ultimate Ninja Storm 2 shines brightest, it also contains some of the game’s weakest moments, the otherwise hitch-free experience dampened by some unfortunate, anachronistic design decisions.

Though the tedious minigaming of the first installment was thankfully stripped out, the world exploration and JRPG-style storytelling that replaced them shoehorns in a lot of somewhat less tedious (but still tedious) walking around. If the boss battles are the best part of the game, why should players have to backtrack all the way to where they happened in order to unlock the ability to replay them? And if the fun of regular battle is seeing a lot of characters belt out their unique take on ninja chaos, why should players have to grind out so many Storm Points to unlock everything?

Given the obscene amount of content already available on tap (between 15-20 hours if you pursue every quest line, more if you grind for money and points), the last thing Ultimate Ninja Storm 2‘s campaign needed was an arbitrary time sink, especially when the core fighting mechanics are so simple to learn and master. While Trophies/Achievements, local versus mode play, and the ability to go online in ranked and custom matches relieve some of the pressure to grind, the game still veers dangerously close to boring players before they have a chance to experience the wealth of content it can offer.

This is particularly true for players ambivalent in their affection for Naruto itself. Being based on a tween-targeted cartoon widely regarded as a successor to the Dragon Ball franchise, the plot isn’t exactly gripping or complex. 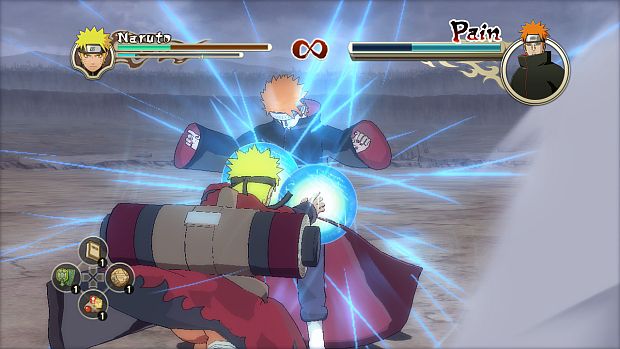 All things considered, Naruto Shippuden: Ultimate Ninja Storm 2 remains a rock-solid, highly accessible game that’s as much fun to watch as to play. Though held back by some ill-conceived design gaffes, it’s still chock-full of meaningful content sure to delight any fan of Naruto or anime games in general.

True fans should rejoice at being able to actually play their beloved show, prospective fans can consider this an effective primer for the series at length, and non-fans should at least try it, especially if they can pair off with a player willing to do the grinding for them.