Namco really does have quite the selection of classics in its library. That would probably explain why it has released far too many “collections” over the years. This newest one hits the Switch, which already gives it the added benefit of being portable. It can be hard to turn down classics on-the-go, even if you’ve played them hundreds of times before.

Namco Museum also comes with Pac-Man Vs., a game that originally required the GBA link cable for GameCube. Considering that no one ever used that, this may be the first opportunity for many to play the asynchronous multiplayer title. As for whether or not that makes Museum worth a purchase, well, that depends on how much you like the other included classics. 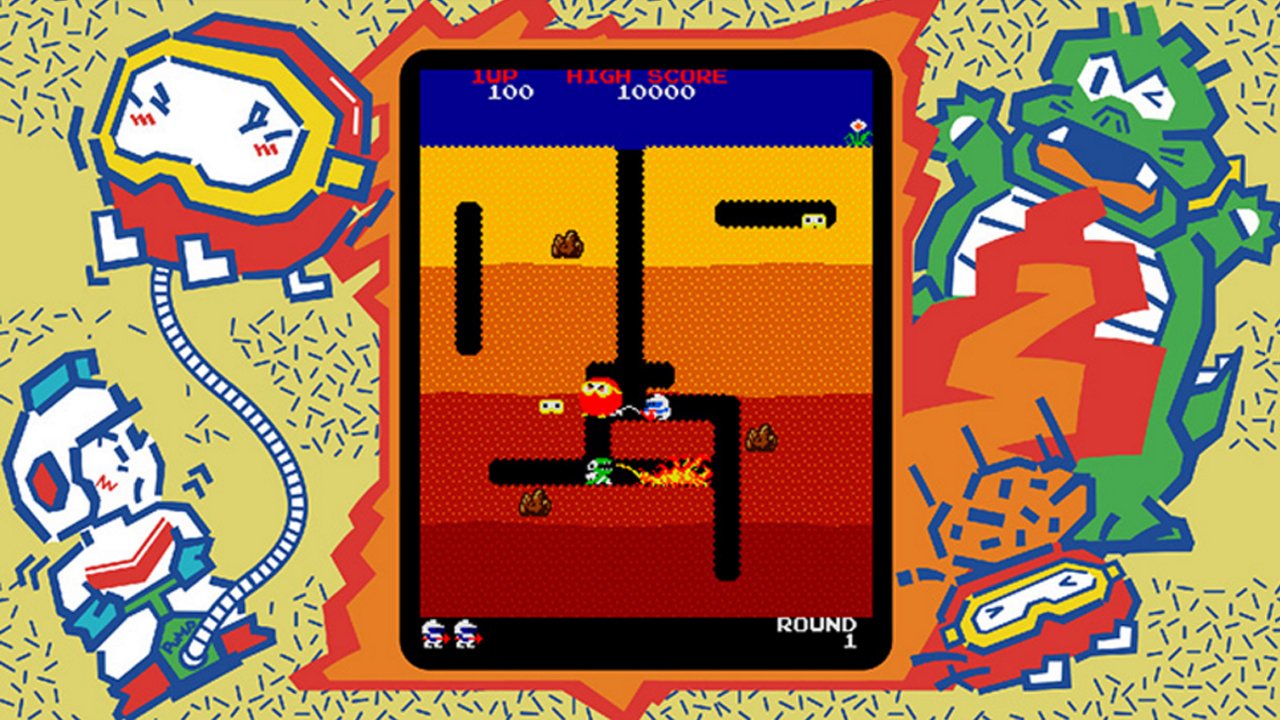 It is hard for me to say if you will enjoy Namco Museum. Basically, you need to look at the included games and ask yourself this: Do I like most of these games? Can I see myself playing them from time to time for whatever reason? I can assist you in getting to the answers of those questions, though. There is more to Namco Museum than just “here, play these games you might like!” There is a bevy of game-specific options, online leaderboards, and each game includes a “Challenge Mode” to try and spice things up for those who may have already played these to death.

First, let’s take a look at the included games.

Not a bad selection, really. It is a very odd decision to include both Galaga and Rolling Thunder when better versions exist in the same package. I guess if you really like the first Rolling Thunder, it’s there, but I can’t imagine myself playing it over the superior sequel at all. At least Galaga is an all-time classic with its sprites and sound effects, but again, I’d rarely ever choose it over Galaga ’88. None of these games are bad; they’re all classics. But those two selections in particular just come off as redundant.

Pac-Man and Dig Dug are absolute classics and I quickly found myself getting sucked in to Dig Dug‘s allure. Splatterhouse is a personal favorite of mine; I love the aesthetic and branching paths that it offers while still being a really tough game. Games like Sky Kid and The Tower of Druaga were new to me, the latter of which I spent a lot of time exploring and enjoying.

Again, your mileage may vary given the selection. The biggest draw for me was Pac-Man Vs. since I never got to play the GameCube original but have always been intrigued by its premise. Up to three players control ghosts while a fourth controls Pac-Man himself. The ghosts hunt the Pac with limited vision, while the iconic Pac-Man does the opposite. This requires two Switches to play the way it was intended, but only one copy of the game is needed; the second Switch can download a free application to join the fun.

It’s also playable on a single Switch console, but the game is quite different. Here, no one controls Pac-Man and the ghosts compete for catching him the most. It’s a strange affair, as ideally, the ghosts want to communicate (“he’s in the top right!”) but doing so might give your opponents the points and bring them closer to a win. This was a novel game in 2003, but since then so many asynchronous multiplayer games have released that make Pac-Man Vs. feel a bit underwhelming.

There are plenty of great options included for each game that allow players to customize their experience. It is possible to rotate the game 90 degrees and hold the Switch sideways, which became my preferred way to play. There’s no traditional way to keep the Switch standing up tall, so I just kept it on my folded legs as I relaxed on the couch and blasted aliens in Galaga ’88. It’s a pretty comforting experience. Many games also include multiplayer, but in general, it is of the “I died, it’s your turn now” hot-seat variety, which I always found lame.

Game-specific options allow the player to customize their experiences to make everything more approachable. For example, I’m shit at Galaga ’88. Instead of just throwing my face against the wall and replaying the first handful of levels over and over again, I can turn on the level select mode or continues and not have to worry about it again. Similarly, it is possible to turn off the round 256 bug in Pac-Man or get hints while playing The Tower of Druaga. These options increase the accessibility for each title, allowing even the worst player to make it through the difficulty associated with the games of yore. 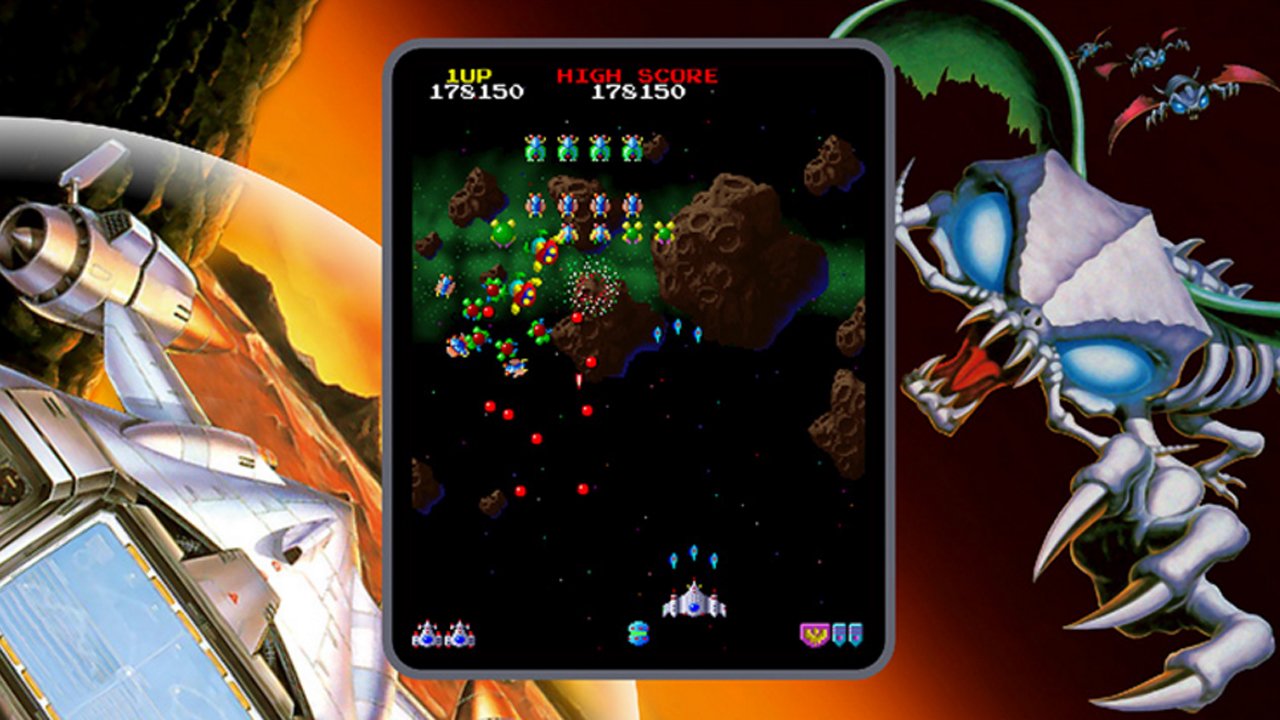 You can also challenge yourself by rotating the view on the TV to be upside down and going for a high score. Or, I guess, you could try out the included challenges for each game, though most of them feel uninspired. For example, the challenge for both Rolling Thunder games is identical: get as far as you can in the final stage and take as little damage as possible within three minutes. While I appreciate the “Nick Arcade” feeling these instill, they’re all samey and not very interesting.

Leaderboards provide an extra incentive to do your best and prove to the world that yes, you are the best Splatterhouse player in the world. Unfortunately, many games are plagued with cheater/exploiters that will never be caught unless they are completely removed. Then again, maybe the user PussMagnet really did achieve a score of 99,999,990 on Sky Kid, I’m no expert.

Again, whether or not Namco Museum is worth your money depends on two things. The first is whether or not you like these games in the first place. The second is whether you legitimately see yourself spending enough time with these classics to justify the $30 price tag. Despite a couple odd inclusions, there was a lot of care given to making these experiences authentic, while at the same time giving players a lot of options that allow them to ruin that authenticity in favor of having a more enjoyable experience.