Every game these days needs its gimmick.

If you had to point to Nail’d’s, it would be that the game is fast. Really, really, really fast.

In an arcade-style ATV/MTX racer the sense of speed is always key, and the high velocity of Nail’d was a given from the outset. But more than any other game I’ve played, the degree to which Techland has pushed speeds is remarkable: once you hit your racing stride, the game’s environments breeze by at a blistering pace, and the screen seems to bend around the player as the vehicle hurtles towards the finish line. Impressively, the game’s engine manages to keep up with the momentum just fine, with a steady and smooth frame rate at all times.

This works both for and against Nail’d’s. As you can imagine, the startling speeds are like a shot of adrenaline right into your veins. But then there’s the different matter of making sure you’re not crashing headfirst into trees, the side of a mountain, or that sign warning you to make a turn that you simply didn’t have enough time to see. In Nail’d, you’ll likely crash a lot, but these crashes are never frustrating, as the game quickly gets you right back on track, speeding down a dirt trail at a million miles per hour before you can blink. It’s almost as if Techland anticipated these frequent collisions, simply building them into the game, as you’re rarely punished for making a wrong turn (or in many cases, not making a turn at all). 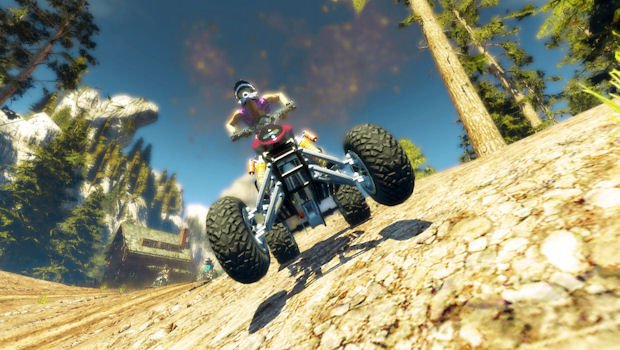 The game also does its best to keep you on the right track and will try to quickly reset you if you’ve gone off the beaten path. When this works, it’s a godsend — you’ll see that you’ve made a wrong turn, and instead of wasting time correcting it (and slowing you down), the game does it for you. In other cases, it’s a hindrance, as the game sometimes make questionable choices in terms of resetting the player’s position. On more than a few occasions I had barely moved off the track when the game decided it needed to stop me in my tracks. This was particularly frustrating when coming off of a jump and preparing to land on a path, knowing I’d make it but having the game completely disagree.

Still, it’s not uncommon to wreck a dozen times in a race event yet still finish in first place. Nail’d features a brake, but it’s just a formality; jam on the gas and hit the turbo button when you’ve got it and you’ll do just fine.

With that in mind, playing Nail’d is a pretty straightforward affair, highly accessible while still remaining a blast to play thanks to some fun, roller coaster-style tracks. The game’s environments are loosely based on real world locations, loosely being the key word; there are plenty of surreal twists and turns thrown in for good fun, and no lack of air to be had as you’ll launch your vehicle off of ramps. As you become more accustomed to the tracks, you can also keep your eyes peeled for alternate routes, some of which can shave seconds off your overall time or lead to a cache of boost-replenishing fire gates and hoops. 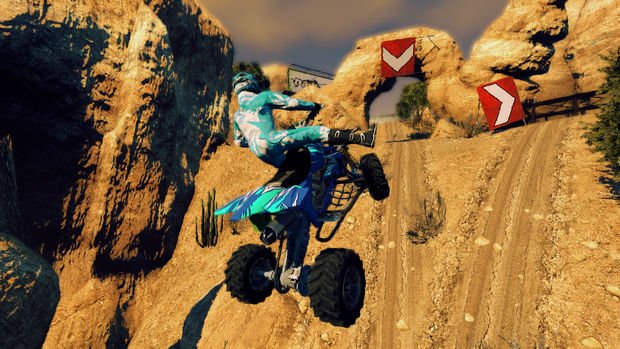 Physics are also tossed completely out the window on this one: the laws of motion now include the ability to navigate left and right mid-air. Vehicles can be slightly customized with new parts that are unlocked as you progress through the game’s tournaments, but swapping out parts rarely seemed necessary. If there was any change in how a vehicle handled after I changed tires or an exhaust, it was completely lost due to the game’s blinding speed. If you’re looking for a deeper experience with various vehicles and components to tweak, Nail’d is not your game; if you just want to start moving as fast as possible, as soon as possible, Techland’s got you covered.

You probably already get the impression that Nail’d is a no frills affair, and you’d be spot on. It’s almost entirely about going fast, and as I mentioned earlier, you will literally never have to take your finger off the gas once you get started. The game does weave “trick events” into its main “Tournament” modes, but that’s a bit deceiving. Nail’d‘s idea of tricks is mostly limited to smooth landings from jumps, whizzing through flaming hoops/goal posts, and the occasional wheelie. You won’t be hopping on your handlebars mid-jump, and you can’t even do a cookie-cutter flip.

This lack of any mechanic beyond “go really fast, don’t stop!” plays to the game’s biggest strengths — its simplicity. While some might see this lack of depth unfortunate, it is truly one of the things that makes Nail’d feel so refreshing. It’s an undemanding game, one that solely seems to exist for the benefit of getting the player’s heart pounding. Because of this, playing Nail’d is a somewhat cathartic experience, where keeping track of stats and worrying about precision takes a back seat to pure thrills. 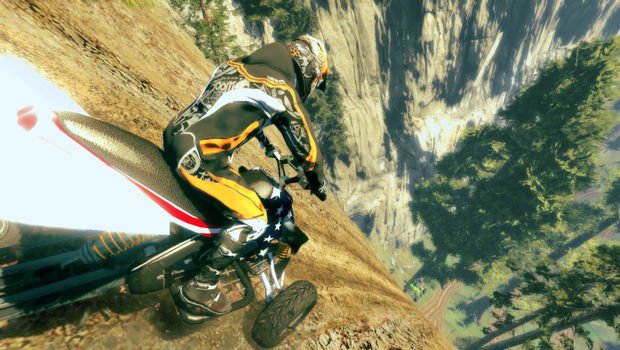 This isn’t to say Nail’d doesn’t provide a lot for the player to do. You’re looking at 14 different tracks (the finest of which are unlocked later in the game), and if you pick up the game new, you’re looking at another four tracks and new cup for tournament mode by way of free downloadable content. That also includes a new mode, “Detonator,” which incorporates time bombs into standard races; you can imagine how that plays out. Nail’d also features support for 14 players online (including support for leagues), as well as a unique leaderboard system that will rank you based on your location. (This is something you set manually when you begin; unfortunately you can’t change this once you set it, so please don’t consider moving across the country.)

For some, Nail’d simply being the fastest damned game on the market won’t be enough to sell them on picking up the controller and giving it a go. That’s understandable, as there are deeper and more polished experiences in both the simulation and arcade categories. But despite its lack of any real innovation or complexity, Nail’d succeeds in being one of the most approachable and entertaining racers of the year. Just temper your expectations accordingly, hit the gas and ignore the brakes, and you’ll have one hell of a ride.