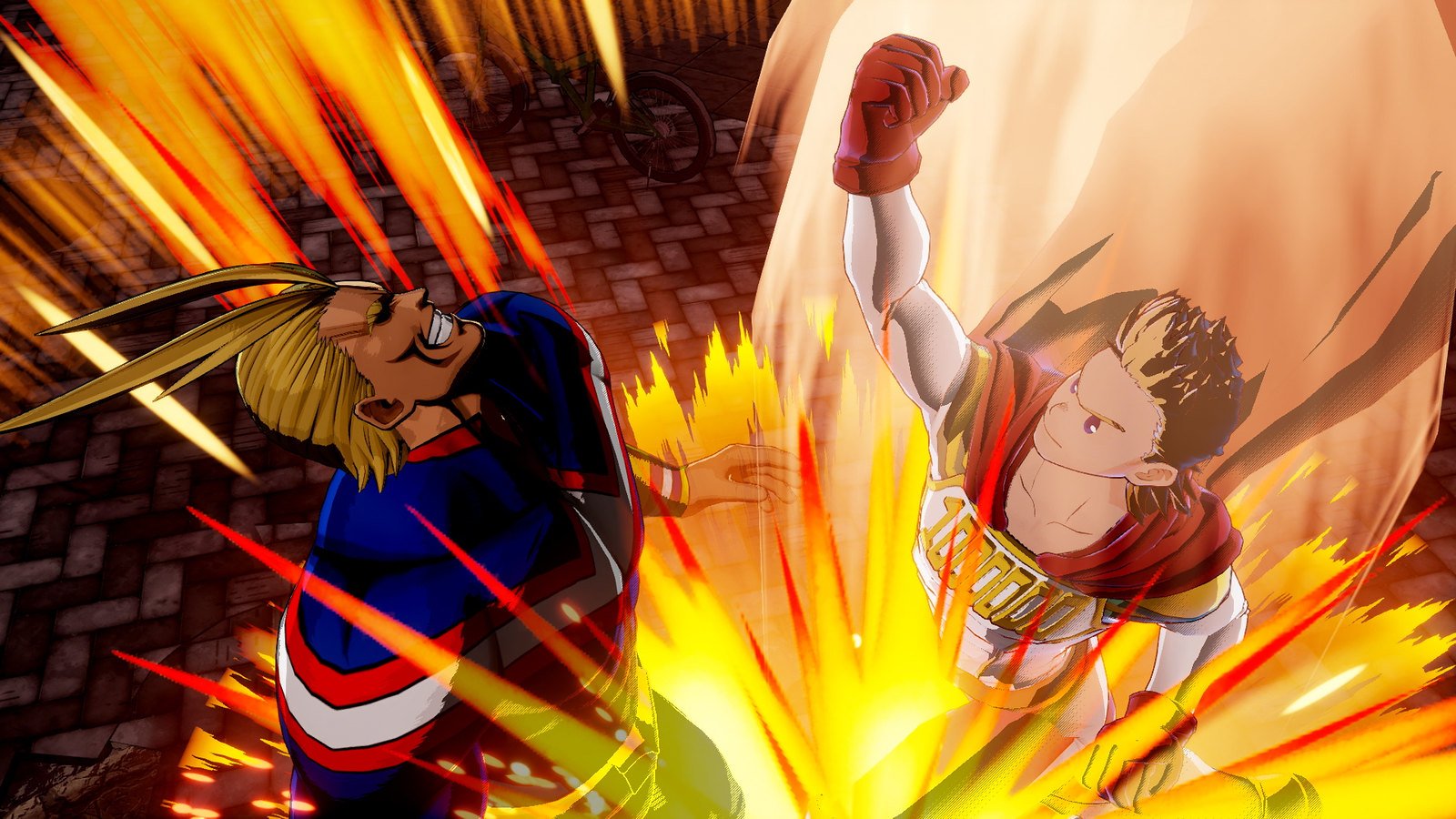 Video game sequels are weird. Whereas the sequel to a book or film need only continue or conclude the story set out in the previous entry, most players generally expect a video game sequel to be substantially better than what came before.

Whether that attitude is reasonable or not is debatable, but the fact that we hold it anyway puts My Hero One’s Justice 2 in an awkward position.

After all, this game is definitely the sequel to 2018’s My Hero One’s Justice, even down to the  awkward, off-brand title. If it wasn’t clear yet, this is the arena fighter based on the hit My Hero Academia series by Kohei Horikoshi.

Naturally, it’s based on the same setting, a world where almost everyone is born with a superpowered “Quirk”, and the best and brightest become Pro Heroes who fight crime. The story campaign follows in lockstep with the anime, once again following Izuku “Deku” Midoriya and his classmates in U.A. High School class 1-A as they struggle with their studies and the pressure to “go pro”. The story starts about the midway point of the anime’s third season, when the students take a test to obtain the Provisional Hero Licenses, and ends midway through the currently airing fourth season, when Izuku starts up a Hero Internship gig with Sir Nighteye, All Might’s former sidekick, and fights Overhaul, a germophobic Yakuza with plans to overturn all of superpowered society.

The campaign tells this story mainly by using stills from the anime, gussied up in a motion comic format and overlaid with voiced narration from the characters. A “Villain Side” playthrough is unlocked after the first completion, which follows events from the perspective of the villains, though this mainly functions as an excuse to allow players control of the bad guys outside of free play. The actual events of the story have been remixed somewhat to set up more fights, but it’s had the effect of omitting some of the most powerful scenes and moments in the process. As such, I can hardly recommend it over just watching the anime or reading the manga, if what you’re after is to catch up with the story of My Hero Academia.

Though the campaign is still worth playing for the characters and customization options it unlocks, it’s the smattering of other modes that will give My Hero One’s Justice 2 what legs it has. Free play, arcade and training modes allow players to practice their skills and go head-to-head with local friends, and online multiplayer is available in ranked and unranked forms. The game also touts a “Mission Mode” that lets players put together their own Hero Agency, but don’t expect it to be a hero management sim. It’s more a fancy premise for a sort of survival mode, where players navigate a map full of battle nodes, seeing how far they can go on one life bar. Since damage persists between battles, it can be quite a challenge to finish off fights while still accomplishing side objectives.

Beyond that, My Hero One’s Justice 2 plays much the same as its 2018 predecessor. Combat is still simple and punchy, letting players whip out damaging combos and supers with ease. Some additions to the system, such as a dodge move and a new gauge regulating blocking, add an element of resource management and bring the fighting closer to the template established by Cyberconnect2’s Ultimate Ninja Storm franchise. At my (admittedly low) level of play, matches were often about trying to read an opponent, the better to bait them into trying to land a super or commit to a combo string and punish them for their temerity. Every character has easy access to moves that can break a guard or give a measure of armor (where their animations don’t get interrupted by incoming damage). The fancy “Plus Ultra” moves are often easy to block, and getting caught up in an enemy’s combo string can deplete huge chunks of health, so the rhythm of a good matchup is actually quite cautious, belying the flashy and aggressive presentation.

My Hero One’s Justice 2 includes every character released for the previous game (including DLC additions) and adds quite a few more. Overhaul’s buddy Kendo Rappa joins the crew, and the League of Villains’ roster is filled out by the addition of Mr. Compress and Twice. The U.A. Students gain the “Big Three” seniors: Mirio “LeMillion” Togata, who can pass through solid objects, the shockwave-shooting Nejire Hado, and animal-morphing Tamaki Amajiki. Class 1-A also gains everyone’s favorite(?) sex pest, Minoru Mineta. Non-U.A. heroes also join the mix: Pro Heroes Sir Nighteye, Fat Gum and Gang Orca, as well as Shiketsu High students Seiji Shishikura and Camie Utsushimi round things out. More heroes are planned for future DLC. This makes for a varied and diverse cast, as every hero plays a little bit differently thanks to the way their unique Quirks are represented. One highlight is Sir Nighteye, whose predictive powers are rendered as an on-demand counter-attack button. Landing the counter activates Nighteye’s Quirk, which seems to force some input lag on the opponent, delaying their attack animations by playing a shadowy “preview” before letting it out. It’s quite clever.

Not everyone gets the same care and attention, though. In play Mirio just comes across as a faster version of All Might, and Shoto Todoroki feels as overpowered as ever. Even my favorite bird-boy Fumikage Tokoyami appears almost unchanged from the first game, despite having learned a few new tricks by this point in the story.

Ultimately, though, what stings the most about seeing My Hero One’s Justice 2 is how much hasn’t changed since the first game. It’s still very much a reasonably well-made and pretty anime arena fighter, but it’s nothing more than that. Even the considerably messier One Punch Man: A Hero Nobody Knows at least had the ambition to try to capture the source material’s spirit through its main single-player mode. My Hero Academia fans looking for exactly that will be satisfied, but once again it seems Bandai Namco has opted to coast rather than adopt U.A.’s “Plus Ultra” philosophy.