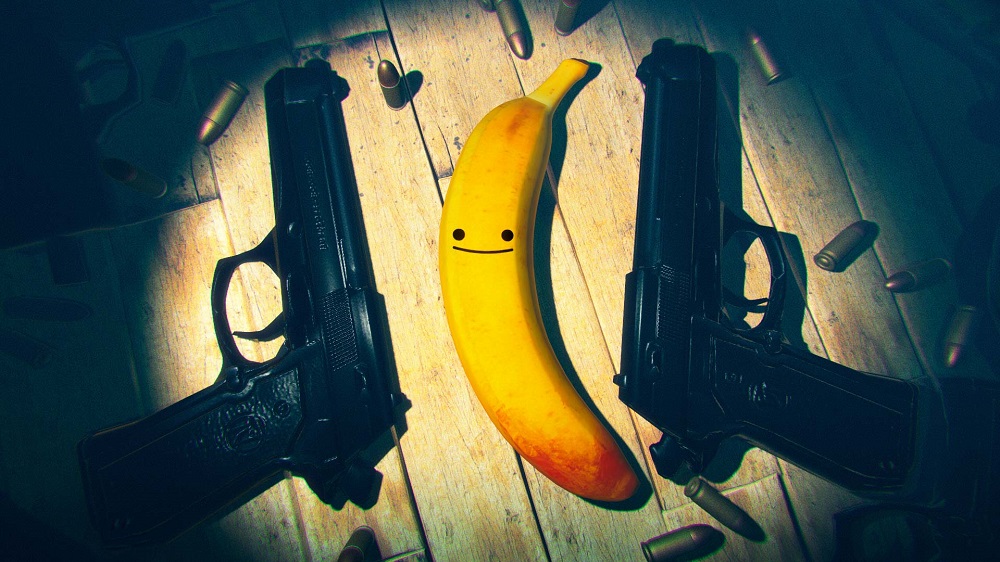 My Friend Pedro is a ballistic game of skill, timing, reflexes, and, surprisingly, efficient time management. This new title from Swedish indie outfit DeadToast Entertainment falls under the highly-replayable score-attack genre, of which publisher Devolver Digital is very proud (think High Hell, Ape Out, or Ruiner).

These are games intended to be played over and over again, with the player constantly pushing their abilities and topping their own records. In that sense, they are a callback to the arcade classics of yore, where the goal wasn’t necessarily to finish the game, or see the ending, but simply to “get better,” with the ultimate prize being the satisfaction of smashing your own high scores and, hopefully, those of your local arcade bully too.

The narrative of My Friend Pedro is simple, yet frightening. A young masked man awakens in a dingy basement, bought around by a somewhat irreverent talking banana. Convinced that his life may be in danger, our protagonist grabs an errant handgun and proceeds to break out of their meat-locker of a cell. Guided by his banana buddy, the protagonist then ventures through a series of equally odd locations, stocking up on an arsenal of automatic weaponry and throwing endless lead in harm’s way.

The aim of My Friend Pedro is simply to complete each stage as quickly and as smoothly as possible. With a deep control engine built almost entirely on platform traversal and gunplay, the player must combine our hero’s acrobatic and sharp-shooting skills in order to reach the end of each stage quickly, efficiently, and hopefully not resembling Swiss cheese. At the end of each stage, bonuses are awarded for speed, one-life runs, and clearing the entire stage of enemies. The real points, however, are racked up by cutting loose and getting your John Woo on.

As you may have gathered from My Friend Pedro‘s marketing, balletic gun battles are the key to high scores. Combining your murderthon with flips, wall jumps, cartwheels, window smashes, and rope swings increases your style points, while a multiplier awards players who move slickly from shootout to shootout, nimbly avoiding getting bogged down in scenery and viscera. The environment is also on your side, with petrol cans, pressure canisters, severed limbs, and even skateboards and frying pans all ready to aid you in battle, whether through room-clearing explosions or smug shots ricocheted into those hard-to-reach corners.

Also helping players out in a pinch is that mainstay of the early ’00s: Bullet Time. At the click of a button, players can slow the action right down, allowing for accurate placement of individual shots, a stylish reload, or just an extra second to plan the next move from your second-story suicide dive. When the returning fire gets a little too thick, a quick twirl, forward roll, and even nearby furniture can give you a second of breathing space before you continue on your quest to fire and forget. All of this is achieved via My Friend Pedro‘s intuitive twin-stick control system, allowing for lock-ons, split-firing, and quick access to your growing cache of weapons.

Aside from several unique sequences and boss battles (which I won’t spoil here), that is, in essence, the entire game. Guide the protagonist through around six chapters, each featuring between seven to ten levels, while honing your skills at traversing the environment, dodging damage, and taking down armies of enemies in as quick and smooth a fashion as possible. Once you’ve done that, keep doing it, find those lost seconds, shorten those firefights, trim down your time records, master your skateboarding skills. Practice is key in My Friend Pedro, and players will only get out of it the effort that is put into it. The only real opponent here is your own time and patience.

It must be noted that My Friend Pedro is not a story adventure. Most players will breeze through the whole game in three hours at best. Said story is also utterly flat. Aside from a couple of particularly off-the-wall moments, there is little-to-no resonance with our hero, the plot, and the denouement. The point of Pedro isn’t to complete the game – everyone can do that with relative ease – the point is to simply get better at the game itself, endlessly replaying your favourite stages and busting your own records until you’re unarguably the second coming of Chow Yun Fat.

Visually, My Friend Pedro contains a strange dream-like style, which lends a little abstract security to the grim fetishization of gun violence taking place on-screen, making the graphic action feel surreal, even slapstick, ala Shoot ‘Em Up or Deadpool. These woozy, hypnotic visuals are backed by an excellent techno score, performed by artists including Noisecream and Battlejuice. This head-pounding soundtrack, combined with Pedro‘s overall weirdness, makes for a memorable universe. The only misfire is a stage poking fun at “hardcore gamers”, that features the kind of low-hanging fruit you’d expect from Family Guy or latter-day Simpsons. It’s strikingly weak satire in comparison to the winking smartness of everything else on display.

Given that the goal of the game is to become a living highlight reel, My Friend Pedro wisely integrates social media options, automatically recording your craziest kills and turning them into .gifs. These can then be saved, or immediately uploaded to sites such as Twitter, so prepare for an influx of cartwheeling mayhem filling up your feed come launch day. Jesting aside, it’s a very smart feature for a game essentially designed around showing off.

My Friend Pedro is a crazy, violent, and sometimes downright weird score-attack title. It’s designed to be played and replayed in perpetuity, with the aim simply to master its wild action, wide variety of weapons and maneuvers, and over-the-top physics. As long as you’re aware of what you’re buying into here, you’ll have a (double-barreled) blast with its gleefully unashamed anarchy.