Shut the duck up! (please laugh)

If you glance at a screenshot of Mutant Year Zero: Road to Eden, you would rightfully assume it to be a grid-based tactics game like XCOM. While this is an apt and welcome comparison, Mutant Year Zero works to evolve that genre in a pretty logical way: by adding stealth and real-time ambush mechanics to the strategy game formula.

The combination of exploring open environments in real time with turn-based skirmishes makes combat move faster while not sacrificing the tension of other tactics games. 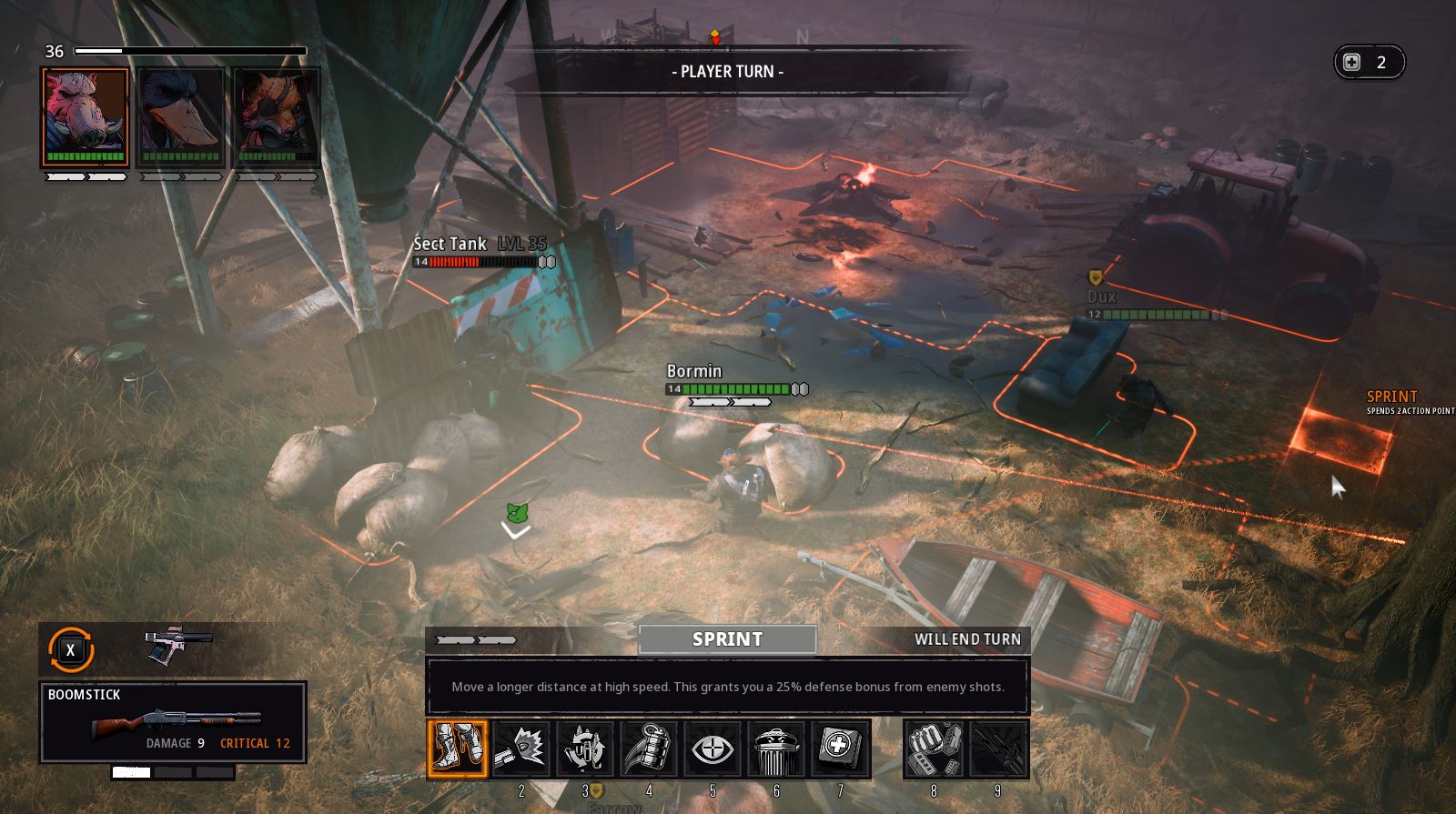 While Mutant Year Zero shares a whole lot of DNA with XCOM, it’s something all its own. The basics are the same: there’s turn-based combat, a tactical grid, a cover system, and characters that can bleed out. Even the unforgiving Ironman mode is present. The most significant difference you’ll notice once you’re set free in the world of Mutant Year Zero is that you’re exploring in entirely in real time with a squad of up to three characters.

You explore The Zone, the stereotypical bombed-out post-apocalyptic setting of our game like you’re exploring a dungeon in Diablo up until you enter a conflict. At this point, you transition into full-on turn-based combat. The smaller squad size means that stealth and ambush tactics are your best friends. Running in guns blazing is a surefire way to get put down real quick. Instead, you’ll want to split up your squad and have them all hide from the enemies with a clear line of sight. Once you’ve isolated one or two foes, that’s when you rush to pick them off a few at a time.

Just separating your enemies isn’t quite enough to ensure victory either. Loud weapons like machine guns and rifles are sure to attract attention, so before a huge fight breaks out, you’ll want to start with silenced weapons like Dux’ crossbow. It’s also worth noting that if the enemy you’re abusing gets a turn, they’ll yell for their buddies, so it’s unwise to start a fight you can’t finish quickly. It’s moments like this that make Mutant Year Zero so intense. Your silenced pistol doesn’t exactly pack enough power to put down that colossal ghoul quickly, but the sound of your shotgun will definitely alert his buddies.

One wrong move can spell certain doom and I’m not ashamed to admit I was saving early and often. It takes the right amount of prep, positioning, and just plain luck to come out on top here.

It takes a while to learn your squad’s strengths. You need to be sure you can hold your ground against the area’s remaining foes before making yourself known. Marching into a zone full of hostile ghouls and robots while tossing grenades in the air is basically suicide.

There’s only a total of five squad members to choose from, some of which have overlapping abilities that unlock as you raise your overall level. The choice of which characters you take with you doesn’t seem to make much of a difference as long as you’re willing to play the way the game wants you to. Any combination of the cast will do. It’s far more critical to be aware of what abilities you have set on each character before they enter combat and what weapons and armor they have equipped. 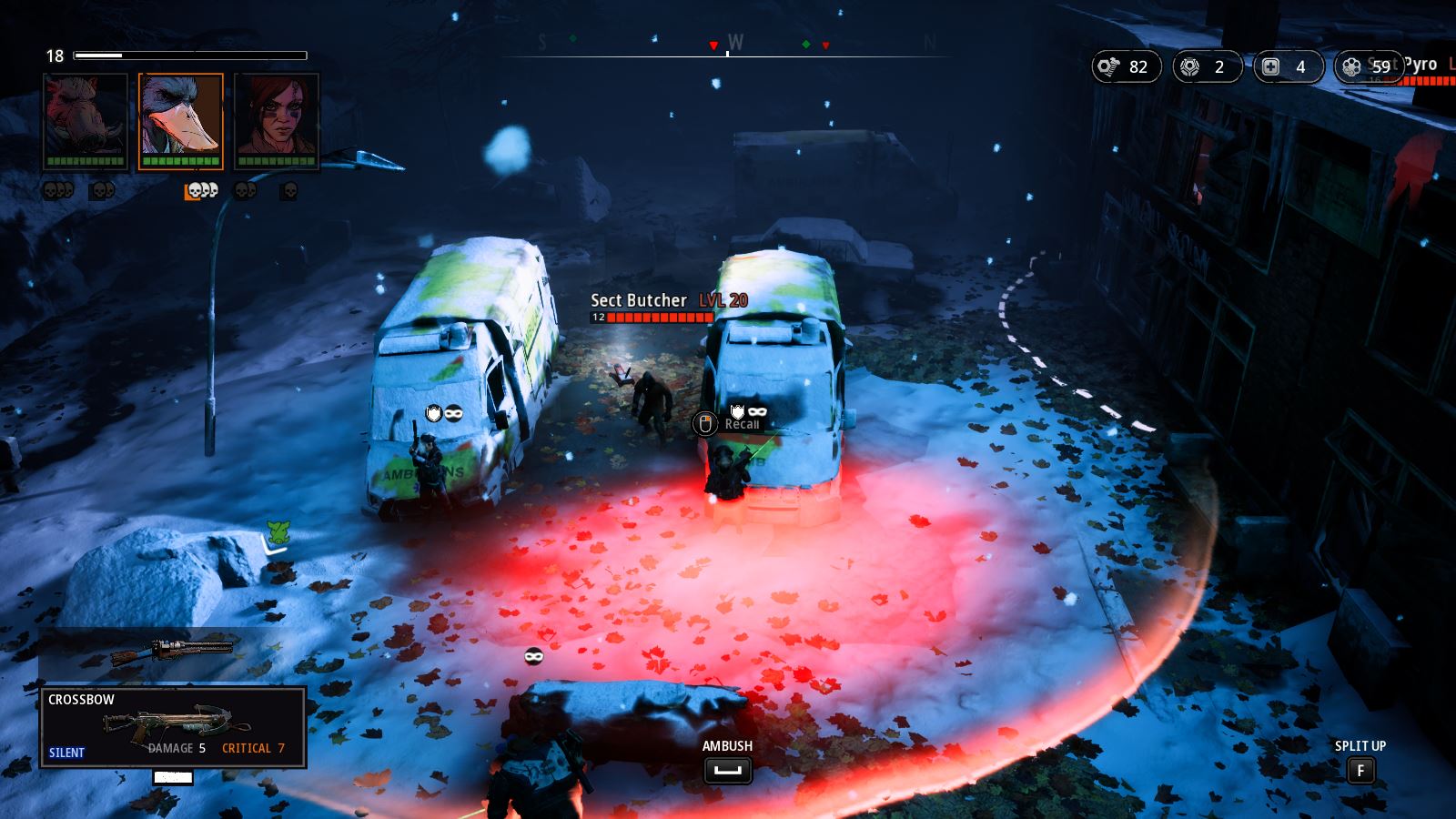 Mutant Year Zero’s story isn’t breaking any new ground. It’s adapted from a Swedish pen-and-paper RPG set in post-apocalypse where most of humanity was wiped out by something called the Red Plague a long time ago. You take control of a group of Mutant Stalkers, modified humans who explore the ruins to gather supplies for the last human settlement known as the Ark.

Over its roughly 14-hour campaign, we’re treated to a ton of lore about this mysterious world via character banter as well as text and audio logs scattered throughout the world. In the long term, it sets up some cool potential storylines for what exactly these mutants are and where they came from, but fails to deliver. Also, the mutants really like to joke about how much “duck” sounds like “fuck.”

Mutant Year Zero seems like the natural evolution for tactics games. The real-time aspects make things move faster and add a unique layer of tension. On the story end of things, it manages to keep you interested until the linear campaign finishes up. You won’t find a groundbreaking narrative but it doesn’t overstay its welcome, and the characters are just charming enough to keep you invested.