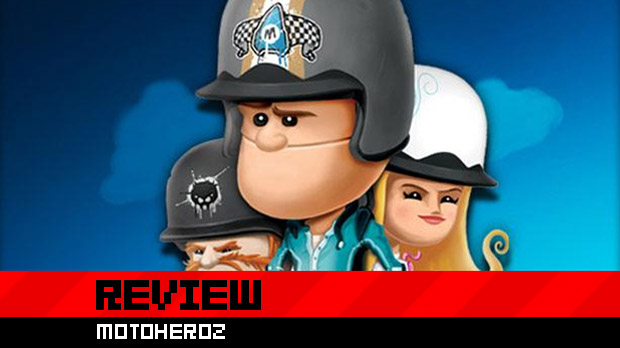 Ever since Jumpman faced off against Donkey Kong all those years ago, 2D platform games have been a staple of the gaming diet. While their popularity ebbed with the advent of 3D gaming, platformers saw a resurgence in recent years in the indie game scene. Sadistically difficult platformers like VVVVVV and Super Meat Boy set the new standard for the genre. Although some may disagree, I personally group the Trials series with them as one of the great examples of modern 2D platforming.
While Trials developer RedLynx has been tantalizing fans with details on the upcoming Trials Evolution, they have also been working on a similar title for WiiWare called MotoHeroz. Though it may not quite live up to the pedigree set forth by Trials, it turned out to be a pretty solid little game. 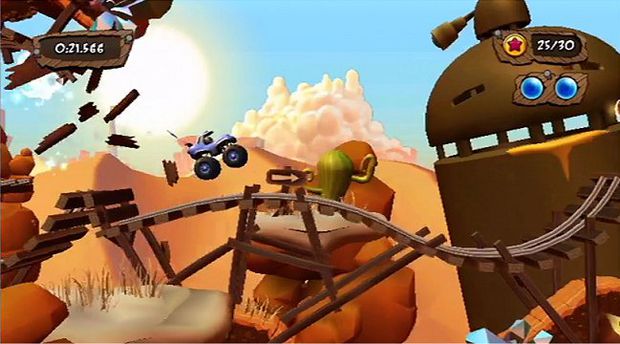 Those familiar with Trials in any of its iterations will immediately grasp the concept behind MotoHeroz. Players control a dune buggy in a two-dimensional plane with only two buttons: forward and reverse. The D-pad can also be used to lean forward or backward, but that’s about it. Despite its simplicity, it takes a fair amount of practice to truly master. While anybody can relentless step on the gas and eventually get to the end, skilled players learn the need for finesse.
Indeed, another trait MotoHeroz shares with its HD cousin is that the time requirements for gold medals on any given track range from pretty tough to ludicrously difficult. MotoHeroz makes the player work for a gold medal. Every ramp needs to be taken at the perfect speed, and every landing must be stuck flawlessly in order to maintain momentum.
Of course, players aren’t required to achieve gold medals on a level in order to progress to the next one, so the less masochistic will likely get through the story mode’s 75 levels in much less time. In a smart move that strays a bit from RedLynx’s previous games, an element of exploration was also added into MotoHeroz. In each level, there are two hidden Spirit Orbs to be collected, as well as a varying amount of coins. While the exploration certainly slows down the pace, it stays true to the difficulty of the time trials. Some of the orbs are diabolically hidden; I’m still missing one on an early stage that I scoured with a fine-toothed comb. 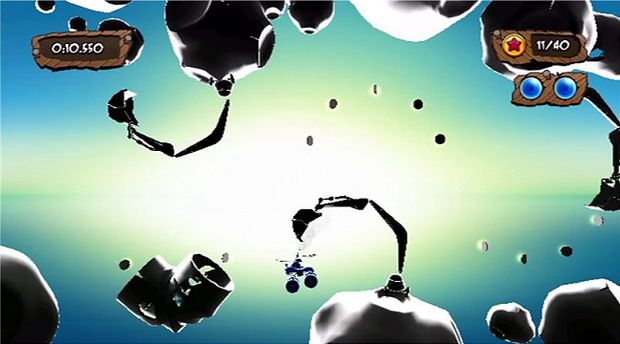 Another reward for exploration is in entirely separate bonus areas, with interesting twists on the lean/forward/reverse control scheme. One type turns the buggy into a submarine, which takes some getting used to but makes sense after awhile. Another set of bonus levels transforms the player’s vehicle into a helicopter, but that opts for a more mundane control scheme of “press the D-pad in the direction you want to go.” It probably would have been more difficult if they had made the controls consistent with leaning, accelerating, and decelerating, but I would have liked to have seen that. And of course, Spirit Orbs and coins can sometimes be found in these bonus areas as well.
Collecting Spirit Orbs and coins help to unlock new vehicles, though it appears they are only unlocked in the multiplayer mode. While a lot of the marketing for MotoHeroz has focused on the party game aspect of it, the multiplayer race is easily the weakest section. It can be fun for about a half hour, as it features some inventive levels for up to four players to race on. Many have Raskulls-style rubber banding, where the leader triggers shortcuts for the players behind, but a lot of the levels seem to be left more to random chance than actual driving skill.
Otherwise, there is an online multiplayer mode, in name at least. The online races cycle through levels, challenging players to play only one run and post their times to the leaderboard. Truly, it is just a time trial mode with leaderboard support, which should be featured on every level in the game rather than just a few at a time. To top it off, there are only about five hundred people total on the leaderboard at the time of this writing, highlighting how few people are playing. 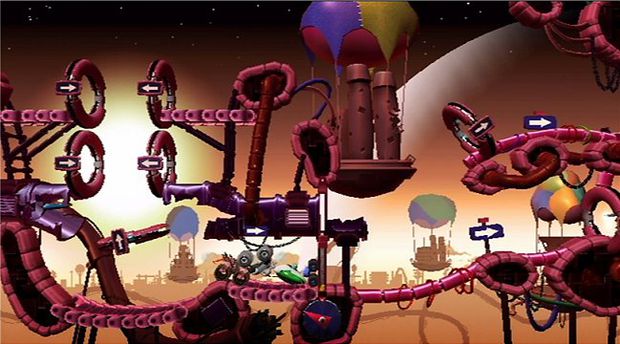 Visually, MotoHeroz is about what one would expect from a WiiWare game. It’s brightly colored, with a few cool visual effects like Donkey Kong Country-esque silhouetting, but the art direction does little to make it stand out from other WiiWare titles.
Truly, MotoHeroz is a solid little game on a download service that sees few great titles that don’t start with the words Bit.Trip. The major sticking point I think most will have trouble with is the price. When Trials HD released on Xbox Live Arcade for fifteen dollars, many scoffed at the price for the game offered (myself included). However, most skeptics who took the time to try the game quickly recanted their preconceived ideas. MotoHeroz sells at the same price, and while it does offer a good amount of content with huge replay value for those crazy enough to go for 100% completion, it is still significantly less content than RedLynx has provided in the past.

Still, MotoHeroz is the first game to make my thumbs hurt since Super Meat Boy, so it can certainly be worthwhile for a certain type of gamer. But perhaps the most telling thing about my time with MotoHeroz is that while I definitely enjoyed myself, it inspired me to go back and play Trials HD some more. Pain junkies can get a quick fix of MotoHeroz methadone, but it will only tide them over until the next hit of Trials heroin shows up.