I have counted the beat em up genre of video games as one of my favorites for decades.

My first experience was with Final Fight back when arcades were both kingdoms and crucibles for children of all ages.  I loved the simplicity of beat em ups.  That feeling of momentum pushing forward through hordes of enemies. Having the power to stop evil from prevailing. For a kid, this was a potent experience.  Sadly, the days of quarter munching machines and the proliferation of the genre are things of the past.

Every blue moon, however, we get a new entry and it is always interesting to see what game developers come up with. The formula is relatively simple but the style and substance are what separates the Final Fights from the Rival Turfs. Devolver Digital and Le Cartel Studio have given us something more akin to the former rather than the latter. 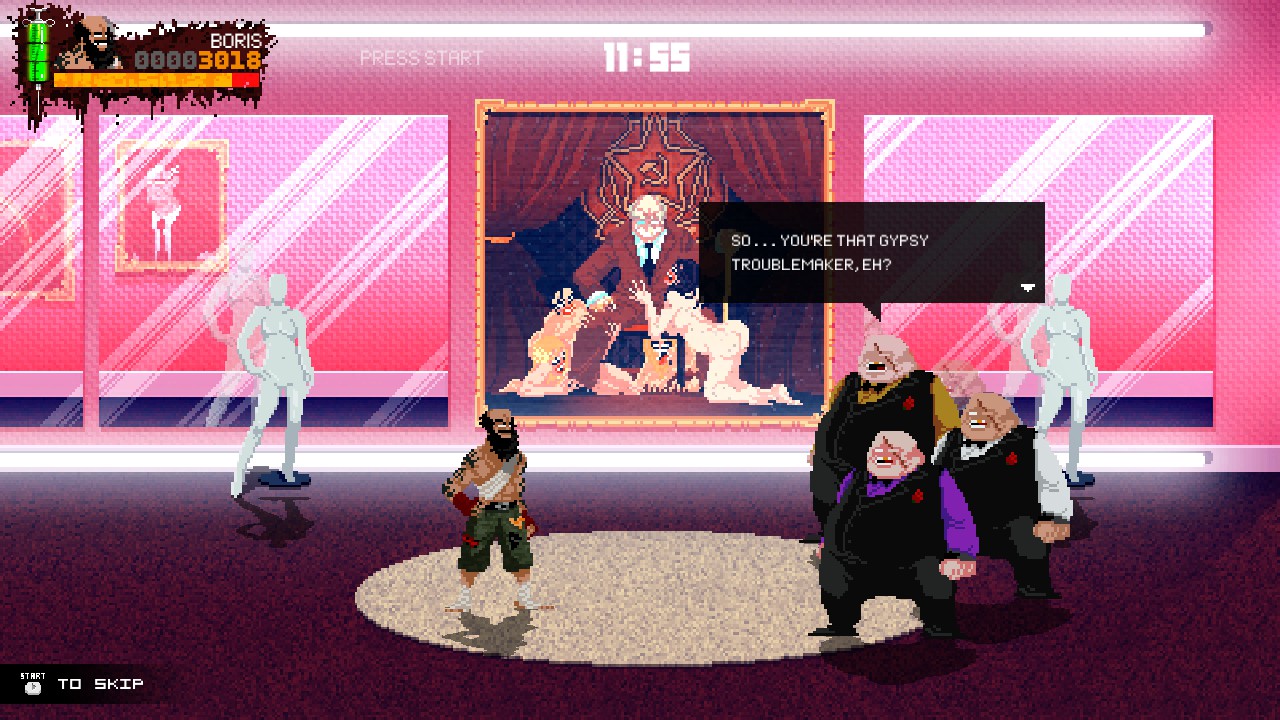 Set in an alternate Russia in 1986, Mother Russia Bleeds tells the tale of four Ruska Roma (Russian Gypsy) street brawlers. They are kidnapped and suffer forced addiction to Nekro, an experimental drug, at the hands of a shadowy criminal organization working with the Russian government. Breaking free of their captors, the four find themselves on a road to revenge, one crushed skull at a time. Fans of the beat em up genre will recognize the character types almost immediately. There is Sergei who is average at everything and makes for a good beginner character. Ivan is the heavy, and Natasha is the quickest and weakest of the fighters. Then there is Boris, who is essentially the same as Sergei with some stats switched. I ended up going with Boris as he had a “David Cross meets Ong Bak” vibe going that I could relate to.

Combat is relatively simple with your basic punch, kick, grapple, jump and dodge set up. The punch can be charged up to do a haymaker and grapples have different moves depending on which direction you press. You can also follow up your dodge with an attack that will knock down most enemies. This is a great way to get out of a pickle when you are trapped in a corner.  The twist in combat comes from your addiction to Nekro as the drug acts as your your health and how you access berserk mode.

Determining how and when to use the drug is key to survival as the game makes no qualms about throwing many enemies who can and will overpower you. You replenish your precious supply via syringe from downed foes who are still twitching. This can be difficult to pull off in the thick of the fight when a mob is bearing down on you so crowd control is key to staying alive.

Mother Russia Bleeds strongest element is its style. It is oozing with it, literally. The blood and gore can be measured in oceans with enemies becoming more bloodied and ragged with every attack.  This was especially useful during boss fights as I knew when to go all out with berserk mode. The eight levels which make up the story are filled with personality that shines through with little details.

Generic stages that we’ve traversed countless times like a sewer or prison burst into life with vibrant backgrounds that are teeming with action. Nekro-induced hallucinations transport you to a flesh prison that would be at home in Silent Hill. Not every level left me grinning but more often than not they added to my overall experience. My personal favorite was a bondage sex club which felt straight out of a Gaspar Noé film. Its atmosphere was like Hell’s version of the Pirates of the Caribbean ride at Disney World.

The soundtrack is chock full of those velvety synth beats that are all the rage right now. Many of the tracks featuring a pulsing, tense rhythm that is reminiscent to the music featured in John Carpenter’s cult classic Big Trouble in Little China. 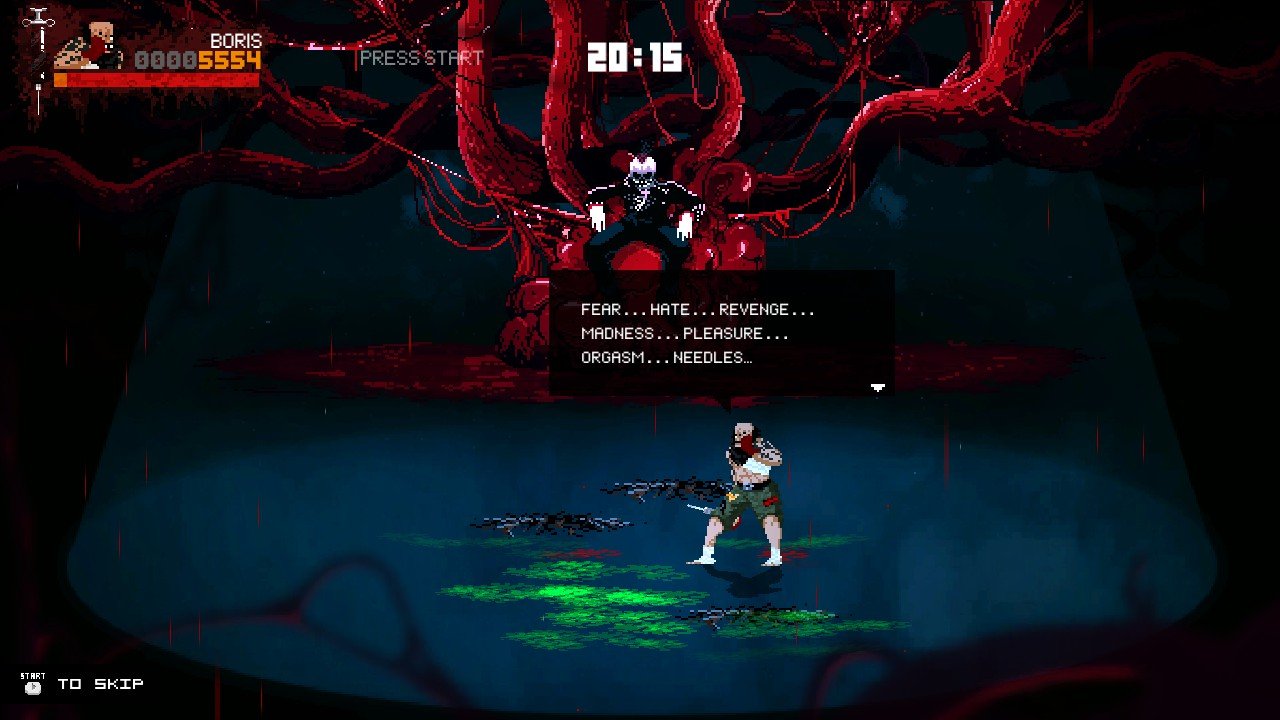 The pixelated style of the game lends itself well to the overall gritty feel of the world, with a less cartoonish take than Hotline Miami and a comparatively muted visual style. I got a strong sense artistically of the old point and click adventure games like Indiana Jones and the Fate of Atlantis. It almost feels reserved but it works well in giving the action weight and adding a sense of realism. The animation is smooth with some nice blur effects accentuating each head butt, dodge and haymaker.

I played on a wired Xbox controller and had no problems with the inputs. However, I noticed items and enemies blended into the world sometimes and got lost in translation on screen, especially during the more hectic boss fights that required items. More often than I would have liked I found myself scrambling to find an item that had dropped or line up with a downed enemy to gather Nekro.

Like most beat em ups, Mother Russia Bleeds is best experienced with others. With local co-op for up to four players, this is an excellent game to kill an evening. For the hermits out there like myself, there is an option for AI companions but if the buddies you meet during the story are any indication, you may be better going at it alone. Just beware of friendly fire. Beating each level unlocks a different arena for Survival mode, which helps to pad out what there is to do after the story has been completed.

There are different versions of Nekro to be unlocked through Survival mode that will change the effect of the drug. So there is plenty to do after you beat the story if you are so inclined. A Boss Rush mode is planned for release in the future as well as a Versus mode which will no doubt lead to some real life brawls. 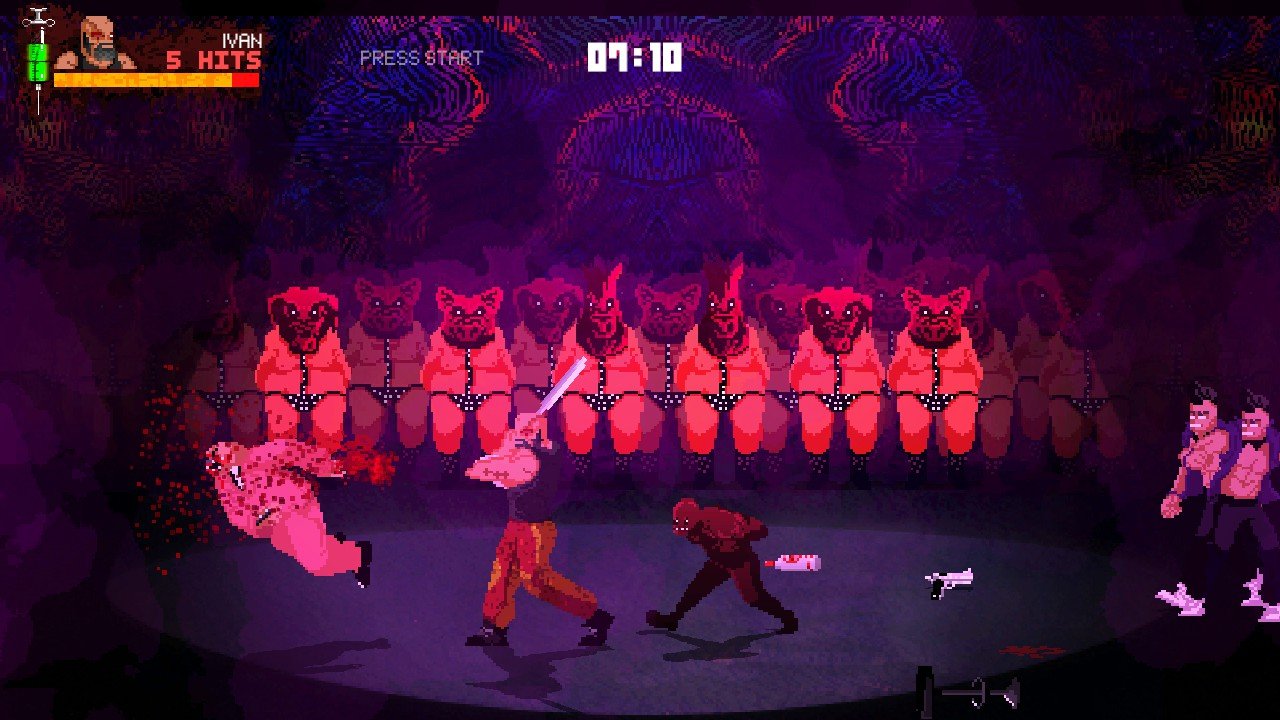 I had a blast with the game and felt it was a really enjoyable experience. There are so many little nods to past great beat ‘em ups, from enemy types to levels and weapons. That being said, it was also very frustrating at times. The inclusion of enemies with guns is a double-edged sword for me. On one hand, you can take their guns for an easy kill. On the other hand, if you are trapped in a corner and one of them lines up a shot, it is game over pretty quickly.

Speaking of, instead of having a number of lives or dropping you back in the action, Mother Russia Bleeds restarts the scene you were in. Sometimes it is back in the same room, other times it was phase one of a three phase boss battle. During the lengthier action scenes a death meant having to play ten minutes over again. Not that long in the grand scheme but in a beat em up that noticeably ramps up the difficulty towards the end, it can be taxing. Cheap deaths from environmental dangers (looking at you motorcycle guys) and cheap enemies are few and far between but it is enough to be annoying when you have to restart and lose your momentum.

Mother Russia Bleeds is a bloody and charming affair. It is Splatterhouse by way of David Fincher. I wanted more when it was done. Devolver Digital and Le Cartel studio have laid the groundwork for a stylish and brutal world. Whether you are a fan of beat em ups or just good old fashioned violence, this is sure to scratch that itch for you. I went into this thinking it would be like Hotline Miami but in a different genre. Then I beat a pig to death with my bare hands. What I came away with was an experience produced by a company that knows its strengths without being afraid to try something new and for the most part, it works very well.