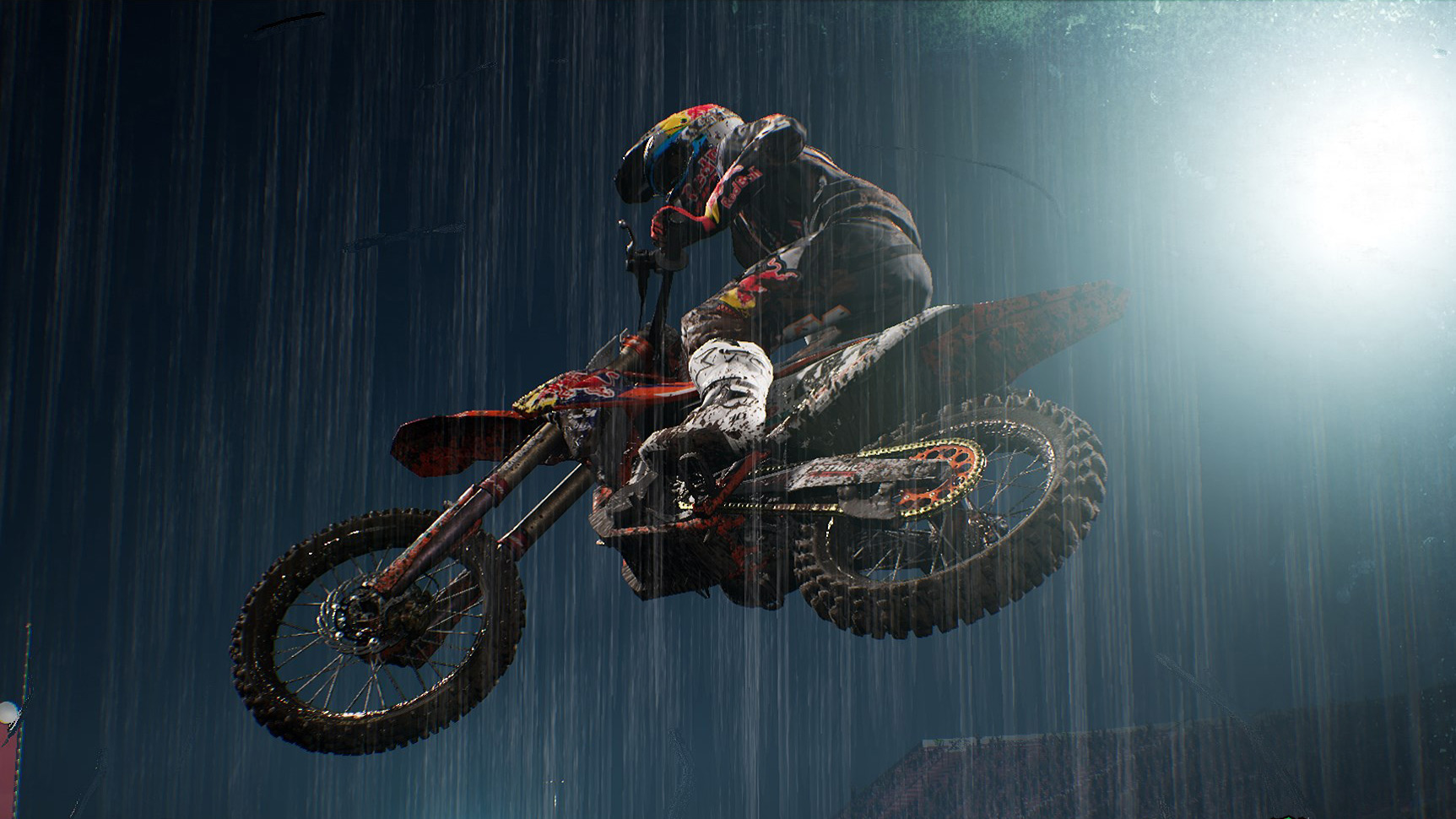 Monster Energy Supercross – The Official Videogame is a first for me as a contributor to Destructoid as it’s a title I’ve covered from reveal to release. I was there for its announcement, playing the version developer Milestone brought to Las Vegas for the Monster Energy Cup. I was there when the full game and track editor were shown off for the first time to the gaming press, and I’m here now reviewing it.

It’s interesting to follow a game in this manner, to experience it presented in the absolute best light under developer and publisher supervision and then compare it to the actual product sold in stores. Sadly, Monster Energy Supercross loses some of its luster from preview to review, but at its core, it’s a pretty fun racer. 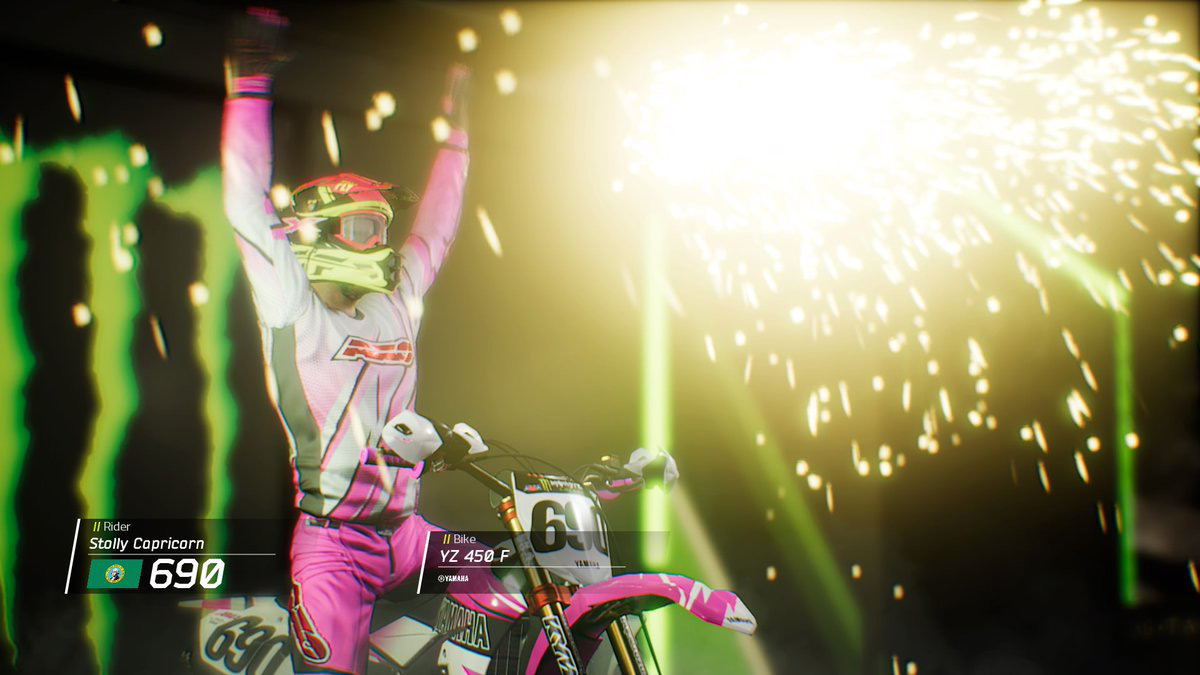 Monster Energy Supercross starts off by almost mocking my inability to play it. While I have experience with the game from my two previous hands-on sessions, I need a few races to get back into the swing of things. Instead of a tutorial or a quick run-through of how to properly play, the game shoves me into my first race as soon as it starts, clutters up the UI with a small control schematic, and wishes me good luck. There’s no handholding, no slow exposure to the racing systems. I’m thrown into the deep end of the pool and while this initial race has no bearing on my career, I feel defeated when I finish in 20th and see my racer, Supercross legend Ryan Dungey, shake his head in disgust.

Perhaps this is the best way to start out Monster Energy Supercross because it is not a very forgiving game. There is no dedicated tutorial other than small descriptions of how I should approach different situations, nor is there a free play mode where I can take my time learning the ins and outs of each of the 19 different tracks and my evolving lineup of bikes. The only way for me to get a handle of the nuances of the game is to play, either going through the career, championship mode, single event, or time trials, which is as close to a practice mode as this gets.

Championship mode allows me to recreate the 2017 Supercross season using one of the 22 actual racers who competed. I can also create my own championship, adding whichever courses I want to it. Both are nice, but the meat of the experience is career mode. Here, I create my own character and race him through East or West 250SX classes before graduating to the 450SX class. This is a standard career mode and once it’s done I can always attempt it again at higher difficulties. None of these modes are as well explained as they need to be. The menus throughout Supercross aren’t user-friendly, making it easy to miss essential features. My first time running through the 250SX West Division, I don’t realize I can modify each race to make them more official with qualifiers and multiple runs. I just breeze through it and if I didn’t take the time to familiarize myself with every aspect of this game for the review, I probably still wouldn’t know it’s there.

The create-a-character options are limited. There are just 10 faces to choose from, all of them fugly, and only height available as a body modifier. Height is measured in centimeters, and with frequent use of British English, it looks like the developers didn’t take the time to update all the text to American English. Given that Supercross is largely a North American sport, that’s an oversight that should be fixed in an update along with maybe adding the US Territories as possible character location choices.

With the limited character creator, the only way to really set my guy apart is with his gear. There are so many styles to choose from, including helmets, suits, boots, and more. I start out with a limited number of options. As I win online and in my career, I unlock new sponsors that give way to more gear to buy. Right now my created character, Stolly Capricorn, is looking fabulous rocking a completely pink get-up, complete with pink bikes.

After I create my character, I select my bike from one of six options and this will be the bike I am stuck with until I earn enough money to expand my collection. Like my clothes, the bike can be completely customized, though in career mode its livery is determined by who is sponsoring me at the time. As it has been several weeks since I last played, I ease myself back into the game playing on the easiest difficulty. It doesn’t take long to sink in and soon enough I’m taking on challengers set to the realistic difficult. Supercross aims to be as authentic a racer as Milestone has produced, creating a product that is highly technical but easily understood.

There’s a single acceleration button, but two brake options, the clutch, gear change buttons, and the touchpad lets me switch between two third-person camera options and two first-person camera options. To really compete I probably have to use all of these competently in addition to using the right stick to adjust my racer’s body weight, but I’d be lying if I said I bother with the brakes all that much. My Mario Kart “let go of the gas” style of taking turns works pretty damn well.

The key to keeping in the front of the pack is judging turns and jumps properly. If my speed is too high or my body weight isn’t shifted in the right directions, I fly off course. Or I take a turn too sharp and end up running into an immovable tire along the track. Or I just wipe out, something that seems to happen randomly with the physics at times. 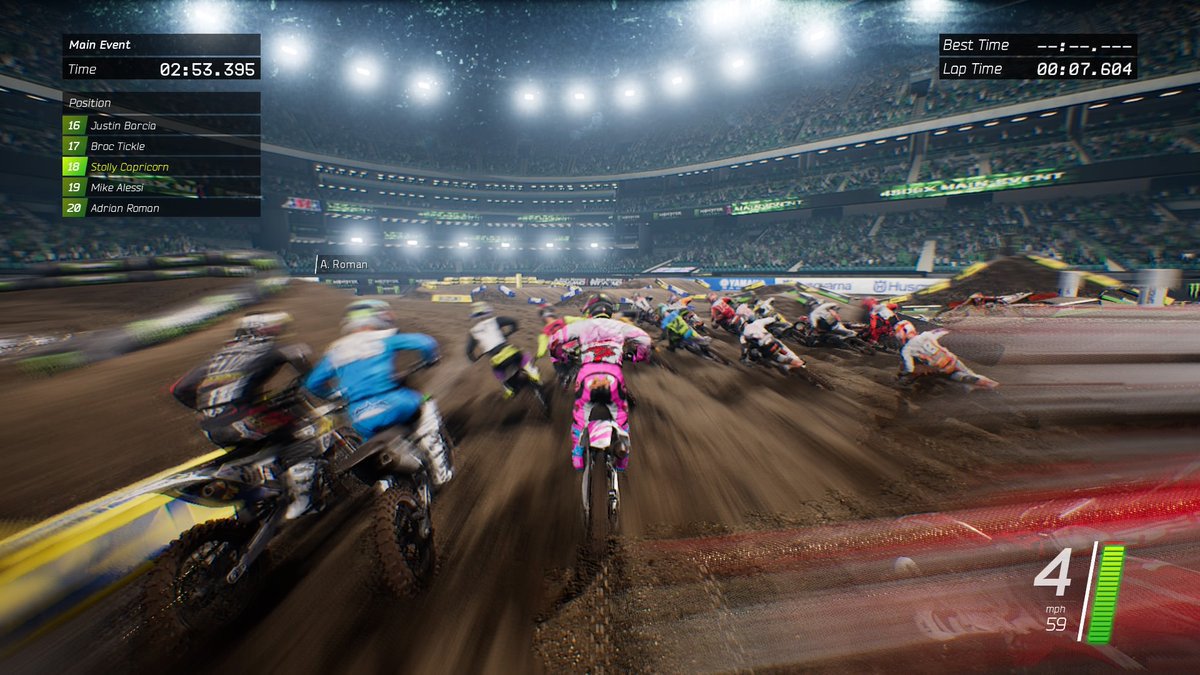 I haven’t mastered everything yet. Jumping out into first at the opening gate still eludes me and there are some course obstacles that give me trouble from time to time. The rewind feature gets me out of most jams. There is no penalty for using it multiple times, so I call upon it as needed to string together a successful run. 13 hours in I’m using it less and less, but there is still the occasional turn that catches me off guard.

In the race option menu, there are ways to simplify each event. I can choose between semi-automatic or manual transmission, and I always opt for the former as I don’t want to deal with down-shifting. I can also choose to use assisted physics or not, and I find the game is actually more playable when I turn the assist off. Not only is it easier for me, but I also get a nice bonus for doing so.

Rewards for winning or placing in these races are Prestige Points and SX Credits. Initially, this system is thrown at me haphazardly after that first ill-fated race, similar to how free-to-play mobile games vomit everything at the player right away. Essentially, the points raise my overall level while the credits let me trick out my bike and getup. Both are earned by winning, pulling off tricks, meeting my sponsor requirement, and more. I can increase my earnings if I turn off any of the options that make the race easier, such as assisted physics or semi-automatic transmission. Turning off assisted physics adds so many more points to my total by itself I feel okay leaving everything else turned on.

When I finally take the game online, I’m disappointed by the lack of options. There is no matchmaking so all of my races feature players of wildly different Prestige Levels. I can create a race and also whittle down available lobbies and potential races by choosing configurations, but this just greatly lowers my chance of actually finding a lobby. In my efforts to play online, my connection did drop twice, but even with my crappy connection, once I got into a race it was smooth sailing.

My prior experience with Supercross was on PC with an Xbox controller. When I boot up the game on my PS4 Slim, I realize that PC must have been supped up because the game is not nearly as pretty as it was during those sessions. The practical effects are still there. The suits still flap in the wind, dirt still latches itself to the screen, and the slick sheen of mud absolutely shines. But there are many low-res textures in the stands and along the tracks, and workers along the way tend to pop in. The load times are manageable as are the instances of slowdown. I wish I could say these are rare, but they actually happen at the same point in every race: right at the first turn. As every racer shoots through the holeshot, the game chugs for just the briefest of moments before smoothing out as I take to the front of the pack.

There are other nagging problems I come across as it’s clear the game isn’t exactly optimized. Besides the framerate, the controls can feel floaty when I land on another racer or one of the soft track markers that get knocked onto the course. I get that I shouldn’t just crush them but this workaround really isn’t ideal. On numerous occasions, I’ve seen a racer wipe and then respawn ahead of where he crashed, sometimes right in front of me. Plus, when a racer is right behind me they can block my view, though somehow this is never a problem for me when we’re all bunched up at the first turn.

None of these are huge issues, but they do take away from what should be a premier racing title. It’s a shame Monster Energy Supercross is hamstrung by these problems, because even if it’s not the sexy PC version I played before, it’s a fun racing game. And I haven’t even talked about my favorite feature yet: the track editor. 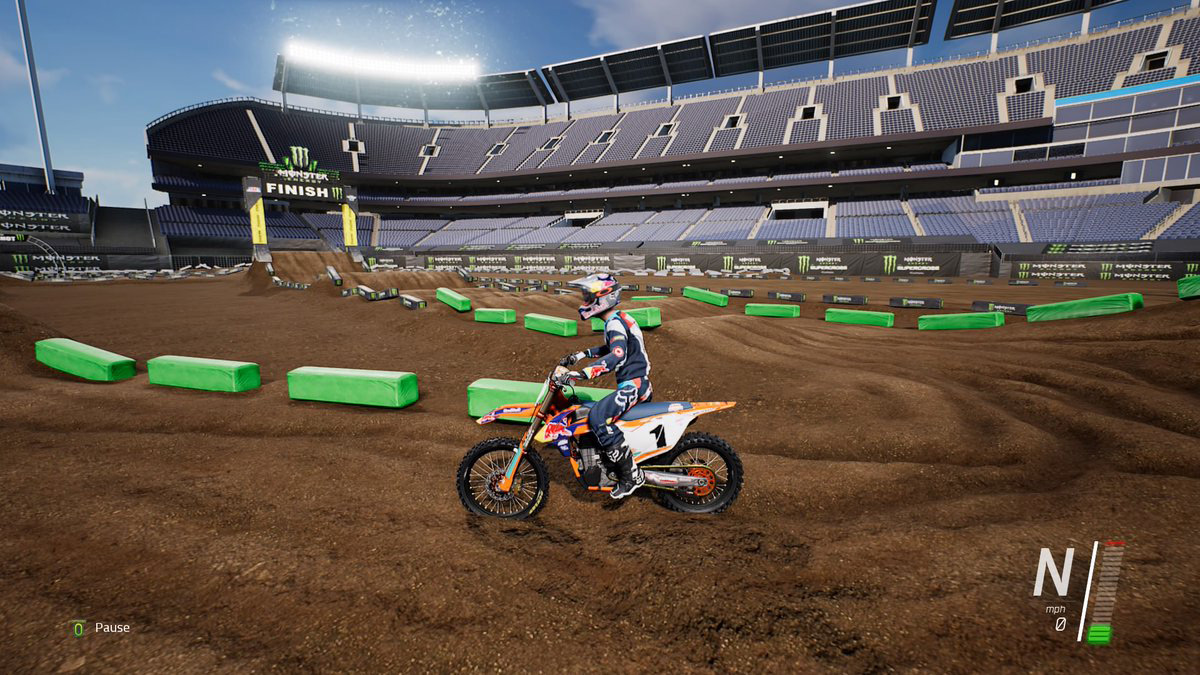 The online-required track editor starts off with a quick video tutorial of how the system works, explaining the basics I need to know about making a track. There are eight different stadiums to choose from ranging from large indoor rectangles to small outdoor diamond-shaped stadiums. There are eight different starting gates I can select and I fill my track with whoops, jumps, straights, bridges and a full 180 degrees worth of turns. As long as I wrap the path around to the starting area, I can validate it and upload the track to the internet.

It’s simple to grasp and I can test my track at any point during its development, but there’s no easy delete button, so going back and changing prior parts of the track can be cumbersome. The free camera option is a great addition as it gives me a better look at the flow of my track, but true mastery of this is going to take hours of studying the included tracks to see just what goes into giving a Supercross track its flow. As a reminder, the track editor feature is not included with the Switch version of the game.

When I first previewed Monster Energy Supercross many months ago, I thought it was a fun racing game with a lot of potential. I still think it’s fun, but this first run at the license from Milestone doesn’t come anywhere close to meeting its real potential.