The Yankees of baseball games

Last year’s The Show was born on third thinking it hit a triple and it’s not like MLB The Show 16 feels substantially different, though it has cleaned its game up and graciously eased up a bit on the crazy, stat-buffing branded equipment. With its effective monopoly on baseball games and consistent goodness year after year, The Show has entered a weird Yankees phase of its lifetime where anything short of a home run (or World Series) somehow feels like falling short. Yes, it’s good, but how about ya WOW me?

There was a (long period of) time when Giants baseball actually was torture, rather than that being a cute tagline in the miracle 2010 season. I watched a young Matt Cain lose more 1-0 ballgames per season than other aces do in their career; the Giants have won 100 games and missed the playoffs; they choked away the 2003 series despite an electric Barry Bonds. But with three World Series in five years, I’m a little more insufferable, a little more in the “all or nothing” (and “even year!”) camp myself. 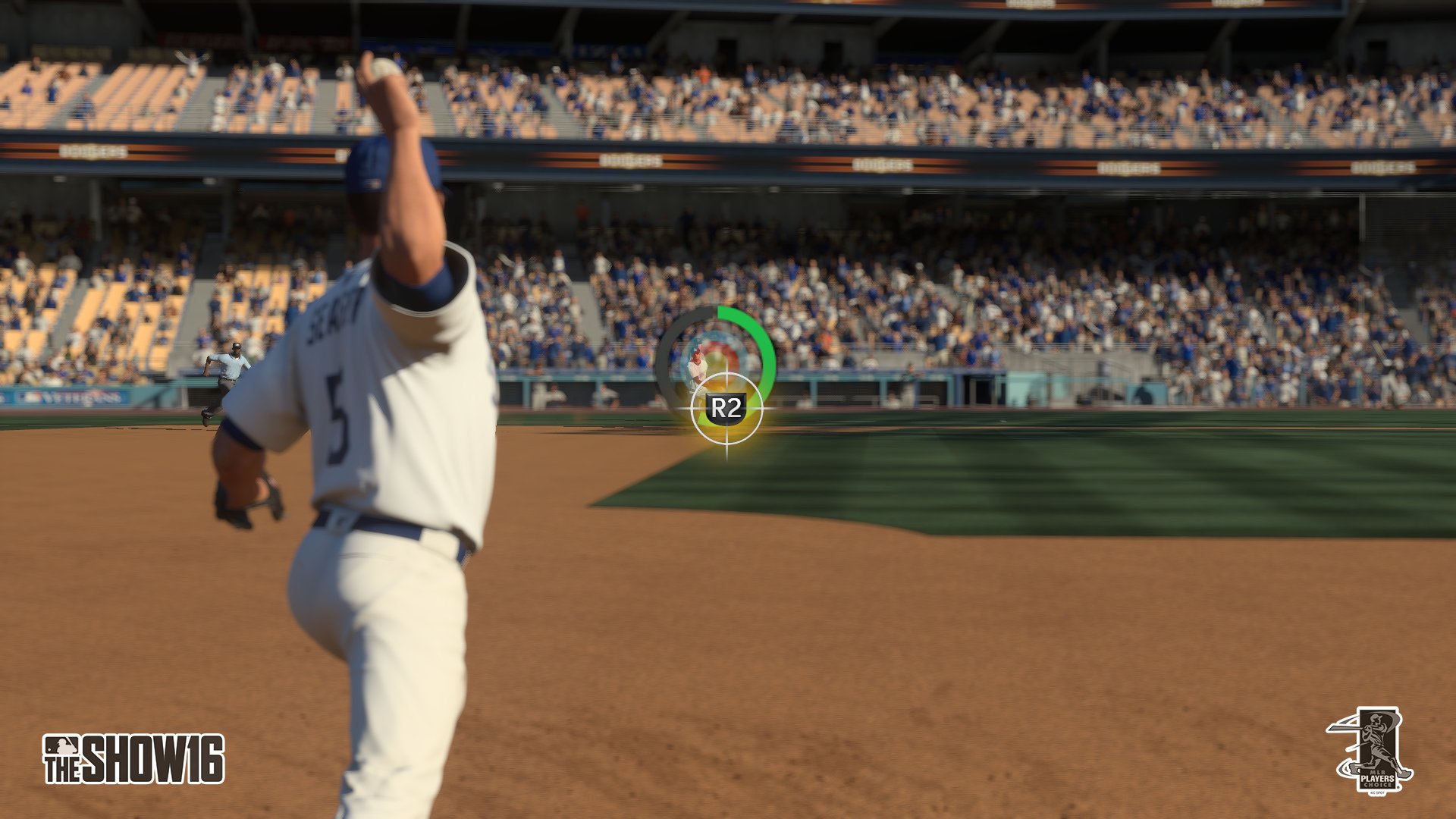 So credit to the clean up. Sony San Diego mercifully cut the Vita version and hopefully the budget PS3 version is to follow (it lacks additions of various significance, from in-game tutorials to open/closed stadium roof options). The name has even been changed (instead of “MLB [year] The Show,” it’s “MLB The Show [year],” which makes sense). More importantly, loads times are down and menus are significantly snappier. Road to the Show no longer takes you to the laborious simulation screen for plays you’re not involved in and you can even play a full series without backing out to the calendar (on PS4 only).

Actually, Road to the Show, aside from welcomed streamlining, has the biggest addition this year: ShowTime. It’s Bullet Time for baseballs and only works with player lock (or in Road to the Show, which is locked to your created player by default). Carrying my 23-year-old ace (a 98MPH fastball paired with a 60MPH knuckleball has given the Nationals a 5th starter with an ERA of about 1) over from last year, I kind of enjoy the gimmick of being able to put a few pitches per game literally exactly where I want them.

ShowTime has a gauge limiting its use and I kind of like that you can waste it on one pitch in an at bat, choosing to slow down time for your “clutch” moment on a curveball in the dirt that you couldn’t hit if the slow-mo was frame by frame. It has most use as a pitcher, though, as well as playing defense/base running, things that always catch me off guard in player-locked modes. Not a bad gimmick, but the performance upgrades in Road to the Show are far more valuable. Plus importing my character from last year seems to have fixed the managerial AI bug that was starting a relief pitcher over me, consistently bringing my starter in in the 2nd or 3rd inning when the reliever was gassed.

That’s not to say the game is hitch free. It’s still bizarre to see players run into each other at full speed like “necking action figures” because there are no collision physics. I had the game flat crash on me once, too — a first, off the top of my head — costing me eight innings of shutout ball. The dynamic difficulty setup also leaves something to be desired. You choose from “beginner” or “experienced” at the onset and the game adjusts from there, which means I threw a 15-strikeout perfect game during my very first game. And I can’t tell if I’m mad or fascinated by the umpire-error strike zones that one time called a ball on a fastball literally in the dead center of the plate.

I’ve also grown real sour on Quick Count, an effort to speed up games by starting at-bats with a pre-determined count (0-2, 2-1, etc). It echoes MLB efforts to speed up the game as the league fears waning enthusiasm in contests that cross the four-hour mark often enough. But it ruins the pacing and robs you of players’ hot/cold zones overlaid on the strike zone. If you want brevity, player-locked modes are a better option. Also turning presentation flourishes off.

While commentary remains trite at best, flat out wrong at worst (players/positions are consistently misidentified), there are a few new, interesting lines that stuck out, like an in-game mention of a players’ high socks meant to honor the Negro Leagues. The soundtrack, however, remains a baffling mix of inoffensive rock bands that you cannot convince me weren’t specifically formed to make music for this series. 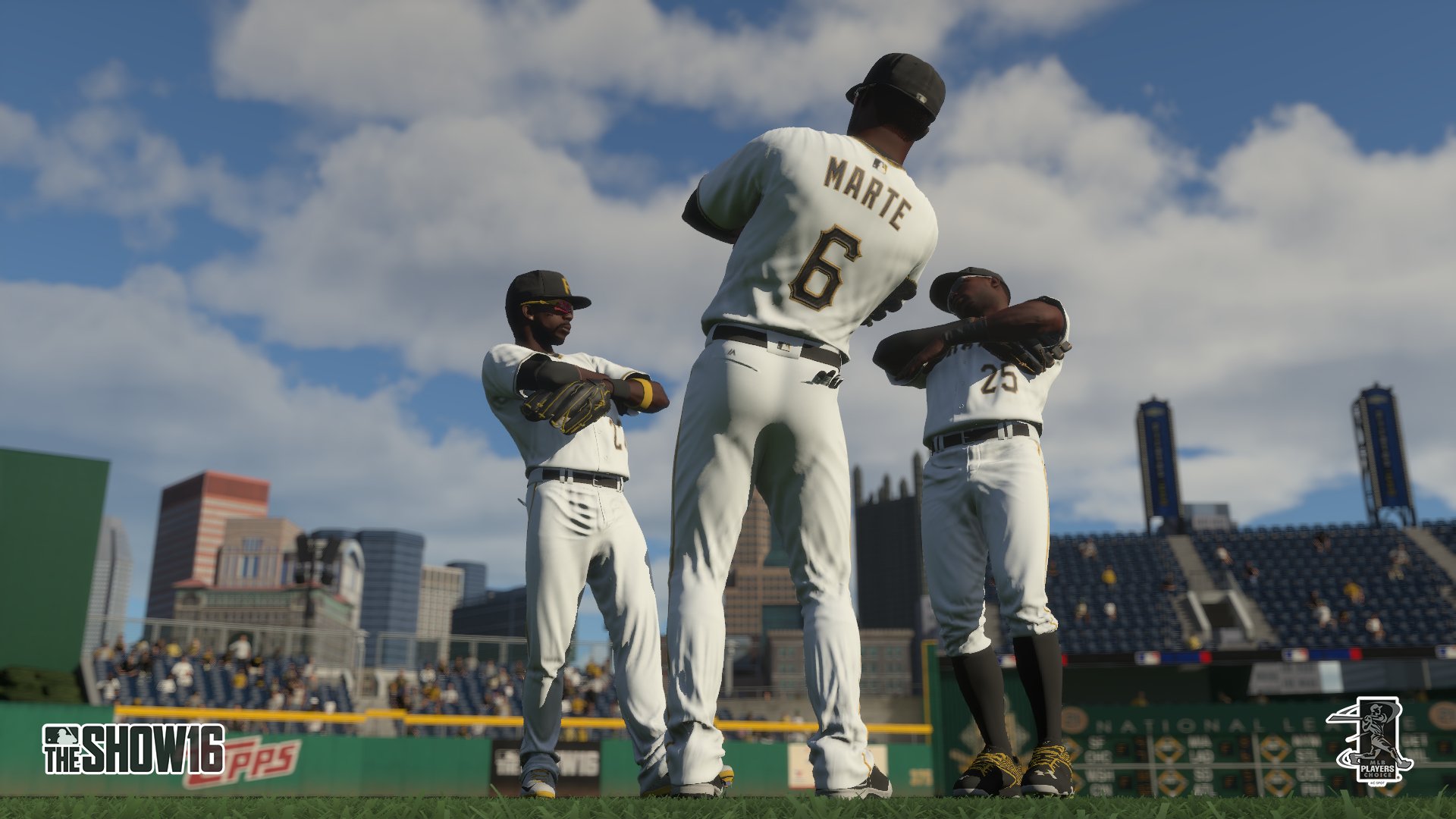 Franchise is pretty untouched and I’m not sure if it’s just vestigial at this point (I would be fine if Diamond Dynasty supplanted it, so long as Season remains). The weird position The Show is in, having roughly nailed the at-bat to at-bat game of baseball, requires it to offer more things. Franchise aims for the complexity of a management sim, which in another series, another sport, would’ve been its own game, but it never seems to demand enough attention. On the other hand, Sony San Diego is understandably leaning into Diamond Dynasty, where you make your own team and start staffing it through card collection. And, of course, you can buy points (with real money) in order to buy fake trading cards.

My preference remains playing Season with the current-year live roster of my preferred team, but I have finally warmed to Diamond Dynasty more than Franchise, if only because the minutia of picking out a color scheme or choosing the aquamarine piping on a jersey for the Napoli Squali feels more personally expressive than setting concession stand hot dog prices.

Bolstering Diamond Dynasty this year are two new modes nested within: Conquest and Battle Royale. Conquest is a single-player mode that tasks a team with winning fandom across the country, shifting fan strongholds around for complete media dominance, I guess? More interesting is Battle Royale, which tries to make a greater production of Diamond Dynasty’s other, otherwise one-off stringing together of random games. 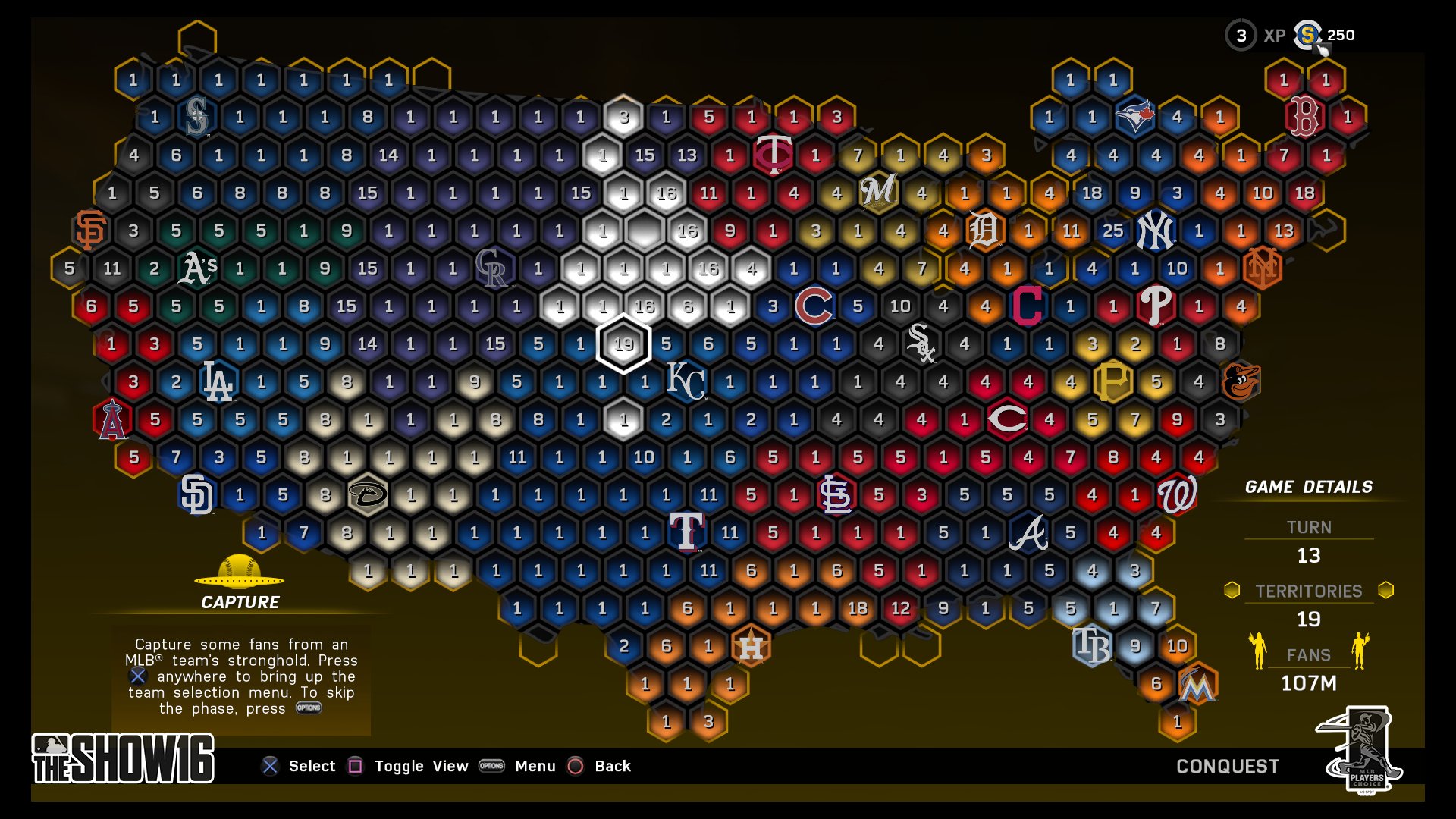 But just starting a Battle Royale asks you to sit through a 25-round draft as you and everyone else involved put together temporary fantasy teams to face off in double elimination tournaments. It is a time sink and something to do, but neither of the new Diamond Dynasty modes appeal to me that much, while the card-collecting mode in general remains a novelty. I do appreciate, with not much effort, ending up with an 80 overall team where R.A. Dickey is my fifth best pitcher, because nobody online (myself included) seems to know how to handle a knuckleball. It’s filthy and I have evoked early innings rage quits on games that were still 0-0.

If MLB The Show‘s new MO is just coasting on the good gameplay and providing minor tweaks to disparate modes, each with their own appeal (or lack thereof, depending), then there’s no greater candidate for games-as-service that I can see. Because there’s good money in it, however, I doubt we’ll drop the yearly release format. It would at least be nice to cut the PS3 version, provided that the freed-up resources would make the yearly changes a little less incremental. Still, the baseball itself is as good as ever, and one of the better modes, Road to the Show, is far less clunky this time around.