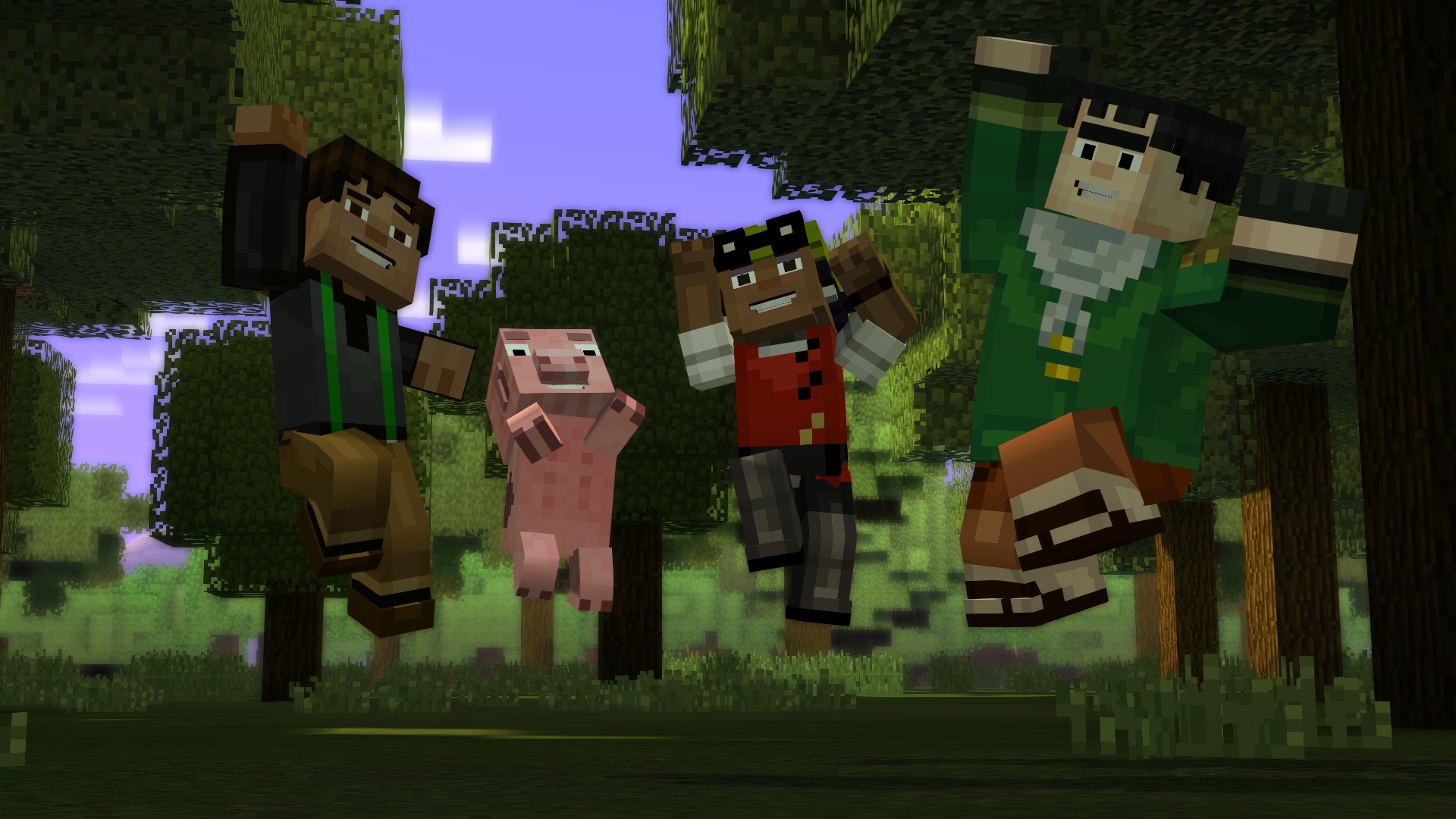 Telltale has seen ups and downs with its licensed titles. With Jurassic Park the studio was still figuring out what works and what doesn’t. More recently, The Walking Dead and Tales from the Borderlands have shown the strength of the format. It seems like when Telltale is given a lot of leeway and focuses on writing first, it succeeds. With Minecraft: Story Mode, everything is in place for it to be excellent.

And so it comes as a bit of a disappointment when my main reaction after finishing the first episode, The Order of the Stone, was a smirk accompanied by a shrug. It’s not bad, but in the wake of some truly outstanding stories, this one hasn’t grabbed me yet.

To its credit, Minecraft: Story Mode does a lot well. The use of Minecraft‘s engine and iconic visual style is a nice workaround to keep the Telltale Tool from showing its age. It’s hard to complain about low-polygon models for a world comprised mostly of cubes.

Despite having fewer moving parts to work with on the character models, the characters are as expressive as they need to be. By narrowing or widening eyes and tweaking eyebrows, the block people (and pig) can show a range of emotions in a cartoony sort of way.

The voice work aids in bringing the low-fidelity characters to life as well. The cast is impressive, including the likes of Patton Oswalt, Billy West, and Paul Reubens, to name a few. Though the characters look similar in the beginning, each has a defined personality that comes through thanks to the actors. Much like a session with Minecraft proper, by the end of the episode my brain stopped seeing everything and everyone as a collection of hard-edged polyhedra and just accepted them as regular places and people.

However, the all-star voice cast does highlight The Order of the Stone‘s biggest shortcoming. With such big names in comedy doing the dialogue, it’s disappointing how little comedy there is in the script. There are a few gags that find their mark, but most are worth only a smile or a chuckle; none really stood out.

On the other end of the spectrum, the drama doesn’t really deliver either. The elements are there: life-or-death situations, uncertainty, mistrust. Still, none of the prototypical “big choices” felt like they carried much weight. Of the five choices shown at the end, the first is just a judgment call with an unknown and arbitrary outcome, two involve whether you want to be an asshole to a guy who doesn’t deserve it, one won’t have clear implications until a later episode, and the last is a decision on which of protagonist Jesse’s two friends has a better plan for what’s to come.

The choices highlight an emphasis on the future. Put plainly, The Order of the Stone is heavy on exposition, setting up the backstory, characters, and events for the rest of the season. While necessary, it misses some opportunities to be memorable in its attempt to lay the foundation.

Story Mode will probably be more of a hit among Minecraft fans than general Telltale fans. The Order of the Stone features a few Minecraft-specific gameplay bits and references. A couple times during the episode, players are presented with a problem, given some materials, and tasked with crafting a solution. Recipes are given for those who don’t know what to make or how to make it, but other craftable objects are present as well. While trying to make a stone sword, I accidentally crafted a lever. After a playful rib about me not knowing what I was doing, the materials were returned so I could forge the weapon.

Later on, the group has to hit a pressure plate beyond a hallway filled with arrow traps. Recipes and materials are given for a couple possible tools to use. It would be great if there were other hidden solutions to discover for those who know the source material inside and out.

In addition to the crafting puzzles, there is one classic adventure game puzzle found toward the end of the episode. It isn’t especially original or taxing, but along with the crafting it does represent a step in a more gameplay-oriented direction from the recent story-only Telltale series.

There is some hope for this series to be great in the future, but The Order of the Stone is just okay. The Minecraft-specific gameplay is a nice way to shake up the usual formula. The blank slate of the universe allows the tale to go wherever it wants. The voice cast is full of actors who can do great work. But the writing needs to be more engaging if Story Mode wants to be taken seriously among Telltale canon.