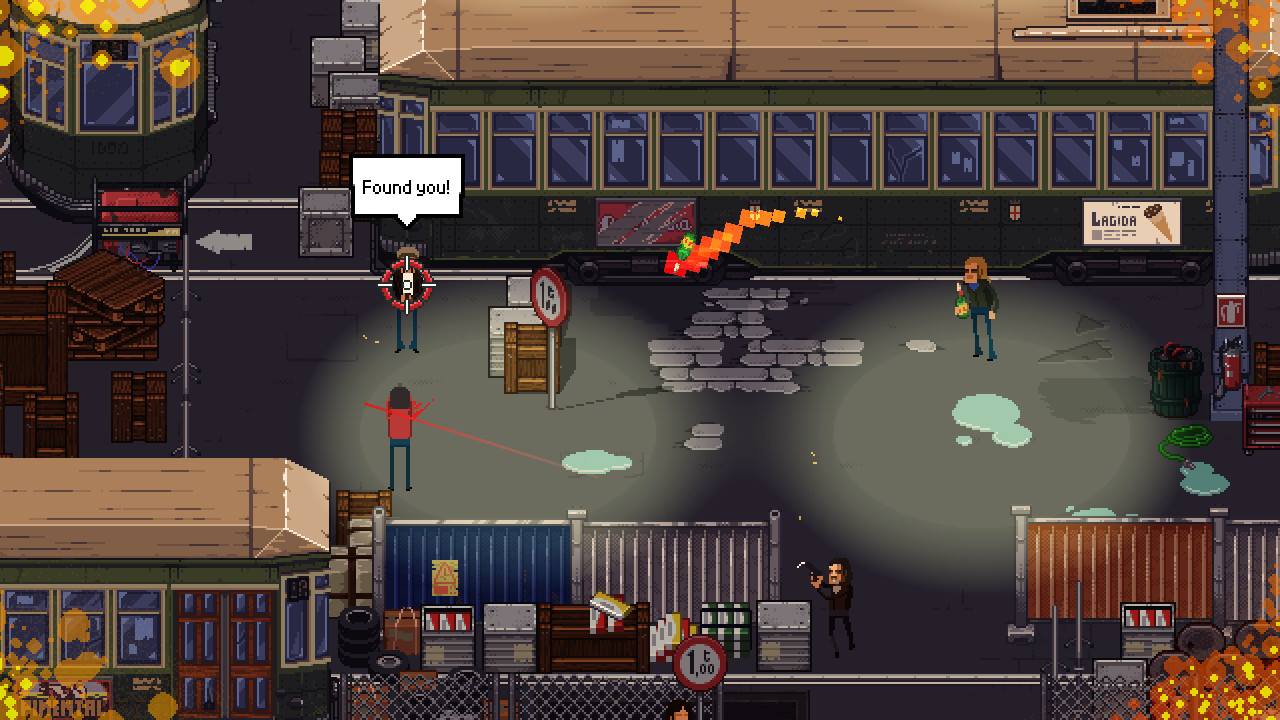 In the mid-1960s, the rise of western films produced and directed by Italian auteurs gave birth to a new subgenre of film, the Spaghetti Western. Notable for overdramatizing conflicts, unique audio and visual editing, and eschewing or outright challenging traditional genre tropes, the subgenre ushered in a new era of the Western film.

Like most movements in film, music, or literature, however, by the time the trend had run its course it had become a parody of itself, taking what made it stand out to preposterous levels.

Milanoir, by the Milan-based Italo Games, creates what I’m dubbing the Spaghetti Noir subgenre, and instantly skips over the buildup to cut straight to being preposterous. 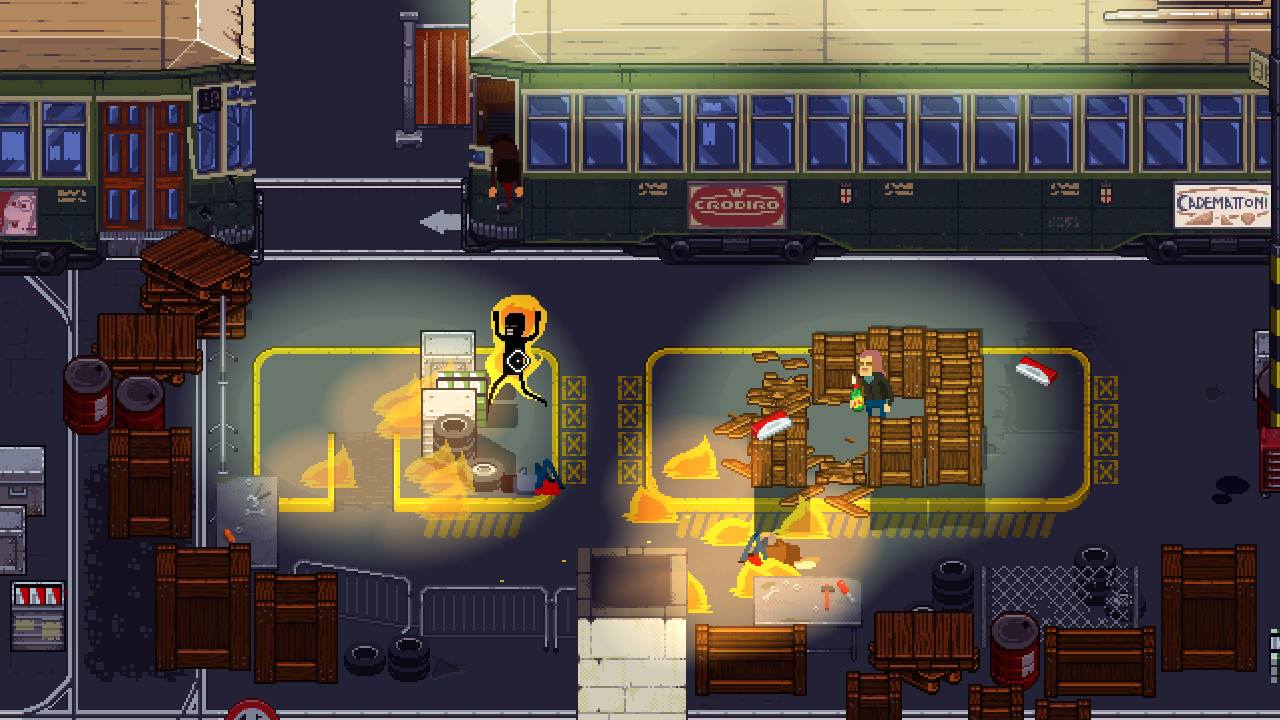 If the word “noir” conjures up images of a pensive gumshoes hot on the trails of some gangster who wronged a deceitful dame, or a moody (and equally seedy) criminal underground wherein a protagonist with a dark past must atone for the sins he’s committed against society, you’re going to be disappointed with Milanoir.

You instead play as Piero, a mid-level Italian gangster with all the style of Ryan Gosling from Drive and all of the substance of Andrew Dice Clay from The Adventures of Ford Fairlane. As Piero, you find yourself embroiled in some pretty standard gangster situations: You kill other gangsters who want to kill you because of your reputation, you do the boss’ bidding in order to stymie the progression of the other gangs, you infiltrate rivals’ strongholds in the least subtle ways possible to exact your revenge, etc. Following genre blueprints isn’t a sin; following them blindly and without much nuance is much harder to ignore.

That lack of nuance — and by proxy, subtlety — ends up being the game’s first major sin. It plays out like it’s written by a 12-year-old who just saw Scarface, and subsequently learned a whole slew of cuss words to use while mom’s out of earshot. I’m no prude or anything, but I have a basic tolerance for seeing the word “fuck” on my screen. It’s a great word when used effectively, but when it becomes more or less every part of speech over the course of five hours of gameplay, it really loses its punch and becomes a lazy insert for substantive language. One out of every five enemies you kill displays a speech bubble saying, “Fucking…asshole…” which loses its effect after the first chapter or so. There are seven chapters. That’s a lot of fucking assholes.

Speaking of fucking assholes, there’s one scenario in the middle of the game which sees the protagonist in jail. There are three different instances of a mass beatdown in prison during this short frame, one involving good old-fashioned sexual assault. This has no lasting effect, and is used more for shock value than anything of actual worth. What’s worse is this part of the game is almost a complete throwaway, story-wise — once you inevitably get out of jail, you’re put right back into the thread before you went away, with almost no story ramifications as a result. It’s lazy, it’s exploitative, and it’s just plain bad.

The second major sin is the gameplay. Simply put, it’s unimaginative. Playing out like a twin-stick shooter, the left joystick controls movement while the right moves your crosshair. It’s simple enough, but even with adjustable cursor speed the crosshair never feels accurate enough with the Joy-Con to really feel like you’re the badass Piero pretends he is. You can move, crouch behind cover, dodge roll, and shoot, and that’s about it. You’ll find a grand total of six molotov cocktails to lob, a few grenades to specifically use against a boss encounter, and a magnum or two…and that’s about it. Halfway through you do get a submachine gun to replace your default pistol, but considering you still have to mash down the right trigger to fire bursts, it doesn’t feel different enough from the pistol to make a difference. A few vehicle sections with terrible controls try to mix up the action, but you’ll walk away feeling more frustrated than anything else as a result.

And frustration is truly abound. The levels are largely straightforward, but many encounters are so horribly laid out that you’ll die numerous times in your efforts to progress. You’ll go from clearing out a screen without taking a single hit to being surrounded by machine guns and grenades without warning, resulting in your immediate and recurring death. To call it difficult is a disservice to difficult games; difficulty implies that hard work, memorization, and the building of basic skill can overcome a once-insurmountable challenge. This just feels cheap. There were several instances where after an hour of trying and trying to progress through an artificially difficult area, I only made it through in the end because of the AI either making a mistake, or putting itself in a disadvantageous situation. Beating a section because the computer fucked up is not rewarding, and it is not something I like to play through. 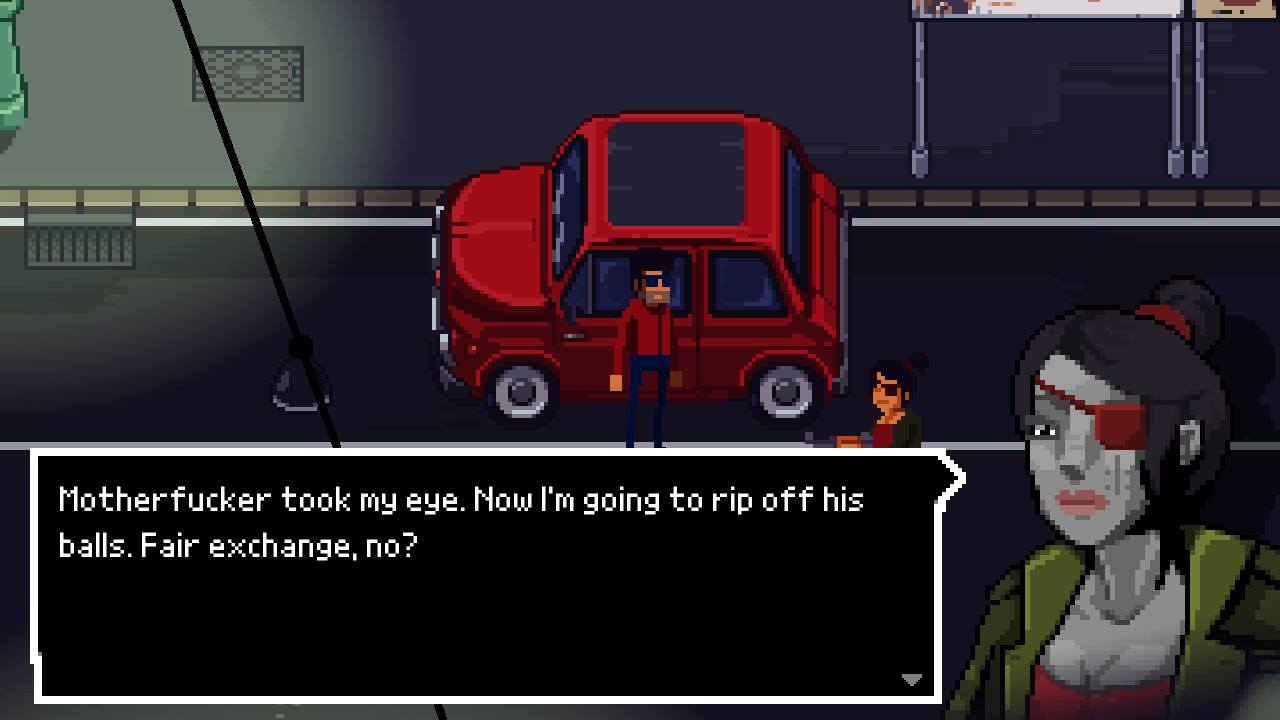 It’s not all bad, though. What initially drew me to the game was its aesthetic. Milanoir has a neat-looking pixel art style, with slightly wonky but attractive animations. This would fit right at home on the SNES or Genesis, which is a compliment in my book. I know you can’t pull up two different indie game articles these days without seeing pixel art games, but it really does juxtapose quite nicely with the (sometimes obtuse) violence going on while you play. The streets are suitably gritty, even if there are only about six different enemy types to encounter throughout the story.

And the music won’t blow anyone away, but there are synth beats mixed with flute solos to make an attempt at setting a mood. You won’t get the long drag of a saxophone like you think you would hear in a noir title, but it’s at least better than the main gameplay loop. The real problem with the music is you’ll hear it a lot. Through all the times you’ll die because you’re surrounded by guns with no cover or being spammed with grenades by enemies across the screen or being absolutely wrecked by that helicopter boss time and time again, you’ll hear the loops of the soundtrack more than you’ll care to. That’s less a knock on the soundtrack itself, but it’s worth pointing out. 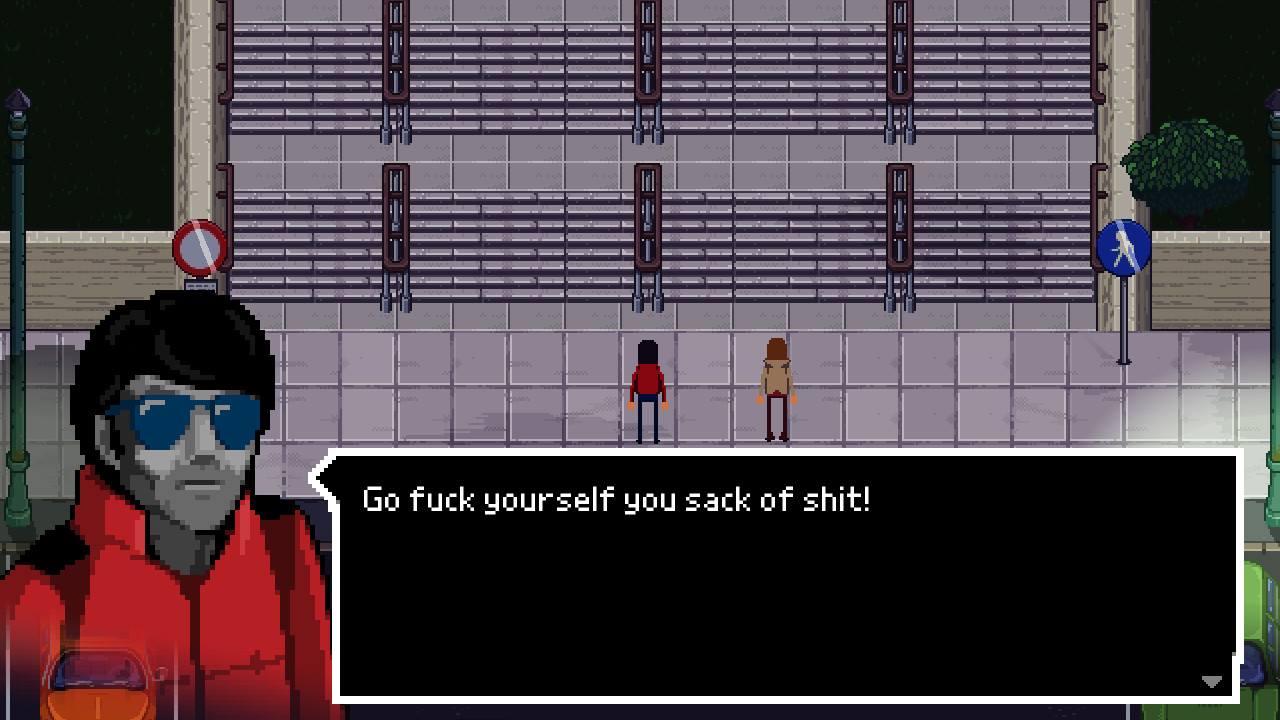 Milanoir takes an appealing aesthetic with a promising setup and turns it into a dutiful slog without much of a payout. It’s basic, it’s petty, and it’s laughably crude. It is a noir title that really doesn’t have a whole lot to say.

…except for “fuck.” It’s got more than enough of those to give.