WayForward Technologies continues to forge on into brave new worlds. After following a multiplatform development model since 1990, in 2008, Wayforward aligned itself with Nintendo and developed, among other games, the criminally underrated Mighty Flip Champs! and Shantae: Risky’s Revenge for DSiWare.

What followed was a long string of hits, the latest of which is an HD remake of the 3DS title Mighty Switch Force! for the brand new Wii U. As with any launch game, you would expect there to be some bumps in the road when converting to a brand new console, right?

Nope, not at all. WayForward has it covered. 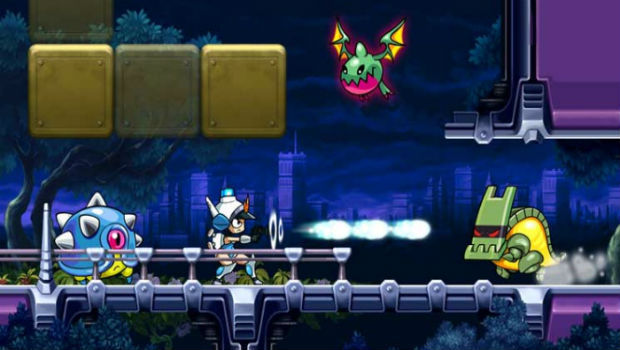 For all intents and purposes, the game plays identically to the 3DS version. Patricia Wagon, the game’s blue-blooded robotic heroine, has to capture a group of criminals named the Hooligan Sisters while making her way through various deadly puzzles and platforming challenges. Patricia keeps things simple in terms of movesets: she can jump, shoot, and switch blocks from phasing in and out — that’s about it.

The Wii U GamePad controls the action very nicely, as you can opt for both the left stick or the D-pad for movement, Y for your blaster, B for jumping, X to look around, and pretty much every other button on the GamePad for switching blocks. Should you feel like retrying a level, all you have to do is press Start and select retry (a feature that was eventually patched into the 3DS version). To reiterate, never once did I have any issues controlling Patricia. WayForward kept things simple and didn’t try to add any gimmicky nonsense. I wouldn’t have had it any other way.

But we have to have some reason to buy it again right? After all, what’s a Wii U game without some sort of cool, newfangled “next-gen” feature? WayForward has you covered there. Should you choose, you can play the game on the GamePad screen or the TV.

All you have to do is press a simple on-screen button either in the level-select menu or the pause menu, and the game instantly switches without delay. Thankfully, sound plays through either device — not both — so you don’t have to constantly adjust your volume if you’re rapidly switching output devices.

I was utterly surprised at how easily this worked, and to be honest, I even expected some issues as one of the first ever eShop games — but nope, it works flawlessly. I’m sure after the honeymoon is over, and remote gaming starts to saturate your brain, it won’t be as cool; for now, playing Mighty Switch Force! on a giant pad in bed is awesome.

The only real downside to choosing the GamePad is that you won’t get the cool Dragon Ball Z-style radar on the TV (it’s just a message telling you to look at your GamePad). Instead, you’ll locate criminals through an icon overlay. It works just as well, despite the lack of finesse, but it would have been nice to allow the TV some sort of functionality.

The GamePad’s on-screen visuals don’t look as vibrant, but that’s to be expected on pretty much every Wii U game going forward, considering how great the new HD visuals look. In terms of a general visual assessment, I prefer the pixelated look of the 3DS version, but that doesn’t mean WayForward slouched on the visual upgrades. In fact, the game looks downright gorgeous on a nice set, and colors pop up in a much more radiant manner than the 3DS version ever could display.

The lack of 3D doesn’t hurt the game one bit, as everything is incredibly easy to see, and I never had any issues with properly identifying an in or out block. The Jake Kaufman-composed soundtrack is back and better than ever, actually sounding better this time around. 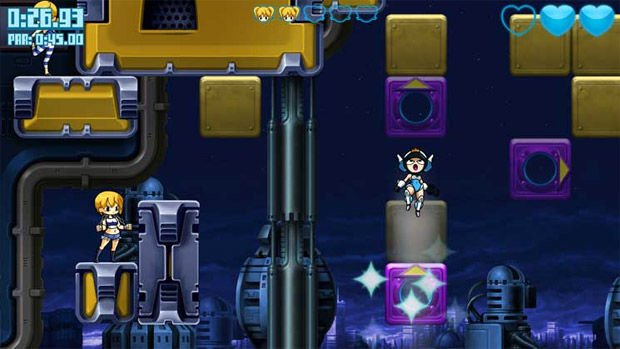 While you could lay waste to the original 16 cases and extra five stages in an hour or two, besting the par score on everything will take considerably more time — and that’s not even including the remade Hyper stages. Yep, that’s right: after you beat Hyper Drive Edition, you unlock the brand new Hyper stages. Each case is remixed (complete with a new theme) and presented in a “hyper” form.

The stages will seem wholly familiar, as the layouts are generally the same, but tons of little tweaks have been made to add an extra challenge. WayForward even claims that whoever beats them will be a true Mighty Switch Force! champion. That’s not even including all of the par times — just beating them in general.

In fact, I still to this day can’t beat par on every single stage in either version. WayForward really pulled out the stops on this one to make it truly challenging, should you decide to try and conquer every single score. Right now, there are no plans to bring the hyper stages to the 3DS version.

At the end of the day, WayForward played it safe with Mighty Switch Force! Hyper Drive Edition, and that’s perfectly fine with me. Even if you bought and cherished the original on the 3DS, this new HD upgrade should be more than enough to drag you back in again, provided you didn’t already tirelessly beat every par time.