Middle-earth: Shadow of War surprised me in myriad ways in pretty much every facet of its existence. The large-scale battles involving giant armies actually felt grand in scale, and the mechanical advancements in Talion’s locomotion made the game that much more fun to play when it came to moment-to-moment action.

The narrative bits, while still mostly on the level of a QTE battle with Sauron from the first, were mostly take it or leave it affairs. Just when I thought the concept of the noble Celebrimbor from the source material becoming a greedy wraith obsessed with his own Ring of Power was the worst Monolith could do, in comes sultry Shelob.

It was a weird mix of fanservice and an attempt to create an actual tale that could credibly take place in Middle-earth, but for the most part, the second DLC abandons most of that fluff and moves right into the thick of it. 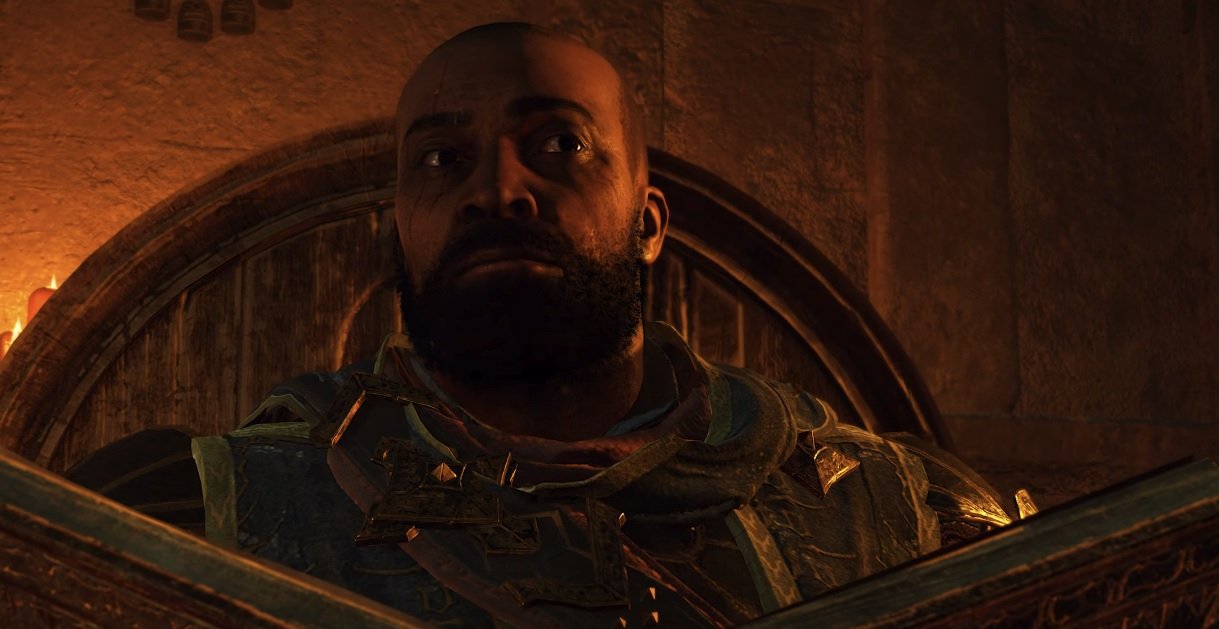 Desolation sets the stage right away before you even boot up the mode: “Baranor is mortal and carries no Ring of Power. If he dies, his story is over, be careful.”

This motif actually does slot into place at the very start, giving the DLC a distinctly different feel. Even at Talion’s lowest point he still had plenty of super powers to deal with pretty much any situation, but Baranor starts off in a sandstorm on a last-ditch mission to search for mercenaries (not even his loyal kin) to take back what Sauron stole. Wyrms (read: basically the things from Kevin Bacon’s Tremors) eat up his entire paltry squad, and then he meets a dwarf that gives him a grappling hook.

Wait, what? Yeah, Desolation doesn’t shy from the wackiness that the Shadow series has adopted (the Jackson-verse’s artistic license with the unconfirmed mythical Were-wyrms is repeated here), but some sort of more mechanical consolations were necessary to prevent Baranor from boring us. I wish the hook was a little quicker, but its simple “point and click” setup works just fine. Baranor also sports a super sprint that’s pretty much on par with the wraith-run, again, for conveniences sake, which slots in nicely with another gadget — the Breath of the Wild-esque glider that counters great heights.

This sort of can-do attitude suits Barnor, a character whose arc is probably one of the best parts of Shadow of War. As a former Harad-born man he catapulted into the elite of Minas Ithil (the Tower of the Rising Moon, sister-city to Minas Tirith) after being adopted. He is not presented as a super-special Númenórean or a god-like character like Talion became — merely a man who worked hard and rose up to the rank of captain of the guard. He’s likable, and that helps drive this new take on Shadow of War, as does the tension between him and his destined-for-greatness brother that was left behind.

But most importantly, Desolation bills itself as a rogue-like, something that’s a bit of a gamble in a game that otherwise doesn’t punish death in any meaningful way. It mashes up with the Nemesis system, which once again works by way of hiring bodyguards and sending out people on sorties, but this time your crew is human. You’ll use healing potions to keep him alive (earned by killing more enemies) and find artifacts to level-up; if you screw up and die, you’ll keep your story mission progress and skills, losing your mercenaries and outposts. To clarify death is sorta meaningful, but not to the point where your save will be automatically deleted or anything. And to clarify even further — if you fail a mission parameter but don’t die, you can immediately restart it.

I’m okay with that. The concept of “keeping skills but losing progress” has made for some of my favorite roguelikes, from Immortal Redneck to Rogue Legacy. While the first DLC was most definitely a “one and done” deal for me, I can see replaying Desolation on higher difficulty levels (of which there are several) more cautiously in an attempt to build up my force without having it all come crashing down. The Nemesis system is far from flawless, but giving it actual weight when your comrades die (some of which are incredibly useful) is a great improvement.

Desolation‘s desert has a good feel to it, as its open nature lends itself well to gliding, and it’s big enough to feel like you’re making a dent in it. Manipulating various hazards to sic worms on your foes while your controller rumbles furiously is just the right amount of silly. Not having us repeat the same gist on an older map is also a major plus for a new DLC. It’s a low bar to meet, sure, but Monolith met it nonetheless. The fact that it came day and date with the removal of microtransactions is the cherry on top.

Middle-earth: Shadow of War – Desolation of Mordor brings a worthy character into the spotlight with a slightly different feel, to aplomb. Instead of controlling a superhero you’re a stronger-than-average man, which somewhat grounds the gameplay while still allowing for plenty of wonderful toys. The whole “roguelike” angle was a bit oversold, but depending on your perspective, that could be a plus.