[Update: Since this review was published, I’ve encountered instances of game breaking save bugs that can spawn the player back into locations where they are “locked” in place. This effectively kills your autosave file. This happened on PS4 to me, costing hours of progress, and I have read testimonials of it happening on PC too. Be warned.]

I’m a scaredy cat. Maybe it comes from getting a diploma from the School of Having the Shit Kicked Out of Me, or maybe it’s my erratic heartbeat and over-reliance on stabilising medication. Point is, I’m a “jumpy” person. As such, loud noises, sudden lunges out of the darkness, and monstrous hellspawn have, surprisingly enough, a pretty animated effect on me.

“Sure, Chris Carter, I’ll review Metro Exodus.” I said, completely ignorant of the above.

Two minutes into the darkened subway tunnels, my first thought was “Who the fuck designs a game mechanic that causes massive spiders to scurry across your face?” What sadists do 4A Games have working for them? Still, ever the pro, I rose above my fears and pressed onward, determined to check out Deep Silver’s sombre sequel. 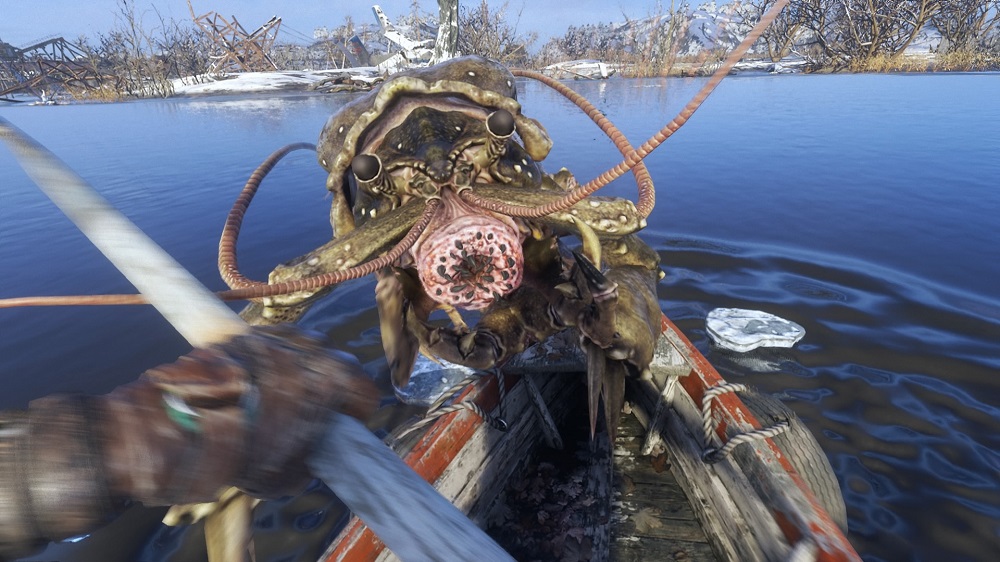 After a brilliantly conceived opening sequence, Metro Exodus drops players into the boots of Spartan soldier Artyom Chyornj. Artyom and his wife Anna – along with their fellow squad members – live underneath post-nuked Moscow, struggling to make a life for themselves away from the suffocating radiation of the overground. It should be noted that players can, for the most part, jump straight into Exodus with no prior history. The intro sequence quickly and effectively expositions the backstory before you trot off into the belly of the underground.

After an awkward, clunky first chapter, Metro Exodus conspires to have Artyom and party venture out beyond the city limits. Riding aboard a purloined train – The Aurora – our crew travels to various wide-open locations, where a series of objectives must be completed before the locomotive can resume its journey – albeit with a few more (or perhaps less) passengers along for the ride. It’s a narrative device that breaks Exodus down into several small-scale open-worlds. The Aurora visits environments such as luscious woodland of The Taiga, the frozen marshland of The Volga, and the sad remnants of what was The Caspian Sea. Without giving too much away, it’s a long haul for our heroes. Exodus doesn’t exactly take place over the course of a lazy weekend.

When it comes to atmosphere, Metro Exodus kills it. Once out on the open rails, each area is stunningly detailed and meticulously designed. Burnt-out buildings, web-filled storage containers, crashed transportation, murky swamps, bandit camps and abandoned homes, all of which feel instantly recognisable from similar locales explored in the Fallout series.

Here, however, 4A Games has created a visual environment with a realism that goes far beyond the tech of Bethesda’s own nuclear adventures. Metro Exodus looks incredible, its desolate world backed by dynamic sound effects, realistic weather and authentic seasonal changes. Whenever we dare venture indoors, we find rusted machinery, flickering lamps, rotting corpses, mold, fungi and worse. You can practically smell the must. All of the above creates the impression of a civilisation that once was, but is no more. A population stopped dead in its tracks in the blink of an eye. It’s eerie, disquieting, and wholly effective. They say the devil’s in the details, and 4A Games get this; wispy gun-barrel smoke, the weak flicker of low-quality night-vision, a visor smeared in blood. Metro Exodus’ world is something else.

Populating Mother Russia are equally realistic beasts, with a menagerie of irradiated creatures out for Artyom’s neck. Gross fuzzy humanoids, huge water-dwellers, mutated rats and the most murderous bear since Grizzly are all waiting to leap out of the trees, seas and cornfields at a moment’s notice. There’s also a few particularly momentous encounters, which I won’t spoil, as they made me jump out of my skin and they can do the same for you, pal. Monster attacks in Exodus are heart-racing affairs, executed with a sense of genuine panic. It’s funny how you eventually feel relaxed when facing off against squads of heavily-armed bandits, just because they’re “only humans.”

Though I’m deservedly painting a solid-gold picture of Metro Exodus‘ atmosphere, environments and denizens, I unfortunately have to head south when discussing some other aspects. Exodus’ story falls flat, not so much in concept – the “Rail Trip of Doom” is a great narrative device – but overall story engagement is let down by terrible dialogue. The script often delivered with a style that is at times unintentionally hilarious.

Mixed poorly into the game’s audio, the dialogue is hurried, muddled in context and off-putting, breaking the taut drama instilled by the outside world. In a bad design holdover from previous games, Artyom is a silent protagonist, speaking only during Exodus’ lengthy loading screens. When Anna is bearing her soul to him, Artyom doesn’t speak a single word in response. It comes across as utterly ridiculous, breaking player/character relations. In MachineGames’ Wolfenstein, B.J. Blazkowicz is his own man, with a voice, a face and believable chemistry with his band of brothers. Here, Artyom is nothing, a faceless avatar who fails to engage with strangers, friends, his lover, and ultimately, the player. 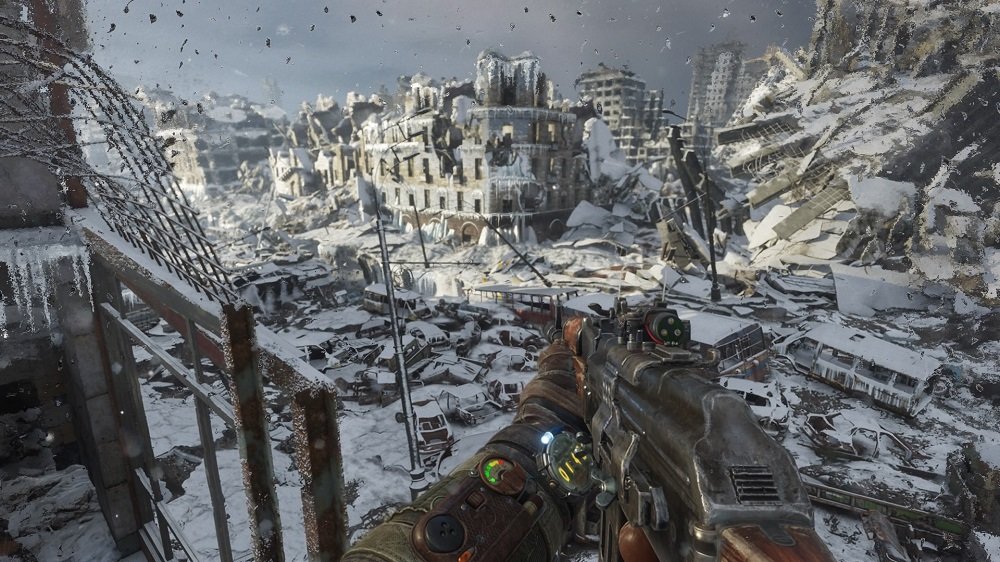 Metro Exodus is specifically built around its crafting mechanic, which can sometimes bring pacing to a dead halt. There are options to reduce these elements, but choosing said option also nerfs in-game difficulty. This makes it tough to find the sweet spot between pulse-pounding, challenging fun and time spent sat building filters for your gas mask, repeatedly cleaning your entire arsenal of weapons, improving your anti-radiation defence, or any other number of micro-management busy-work. Meticulous detail works wonders in Exodus’ world design, but here in the buzzkill of crafting it can become an unwelcome break from the fun of exploration.

Metro Exodus‘ strengths lie in traveling, meeting new people, delving into backstories, and tensely stepping through abandoned buildings – where sudden horror awaits in every corner – not huddled over a workbench, pouring over an inventory so you can make six more bullets for your gun (that might jam after you fire three of them). For those who want exciting adventure without all the red tape, I’d suggest hitting a lower difficulty and just enjoying the wild ride. Conversely, fans of bullet-counting and dumpster diving will be in their survivalist element, with a whole host of bizarre attachments available for your favourite skull-popper. 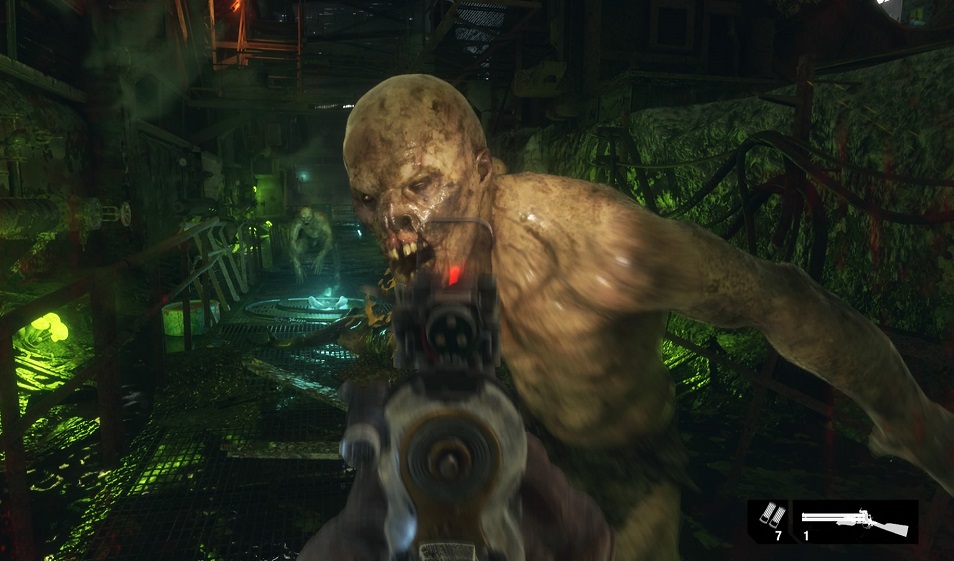 Metro Exodus will be a killer release for franchise fans. Exodus’ Russia plays host to creepy-beyond-belief locations, populated with threats that will leave stains on your eyeballs. When treading tentatively across uncomfortably quiet terrain – trigger-finger at the ready – every single door opening makes you hold your breath. It’s here where Metro Exodus is simply glorious.

When not out in the great unknown, however, Exodus tends to get bogged down by a dogged insistence on overly-fiddly technical details and humdrum foraging. Furthermore, Exodus’ personality-free protagonist and his pals can leave players alternately stifling giggles or rolling their eyes. Fortunately, exciting set-pieces, blood-pumping combat and the changing landscape work hard to keep boredom at bay.

Metro Exodus is a tour-de-force in apocalyptic exploration. It offers a rich, evolving world, brought to life with stunning visuals, immersive sound and ghastly creatures. These thrills and chills are irritatingly tempered with menial tasks, poor voice acting, dull stealth and a soulless hero, all of which prevent Metro Exodus from achieving its true potential. Behind these grievances, however, lies an absolutely thrilling adventure for anyone who dares board The Aurora. Just prepare to get your ticket punched.