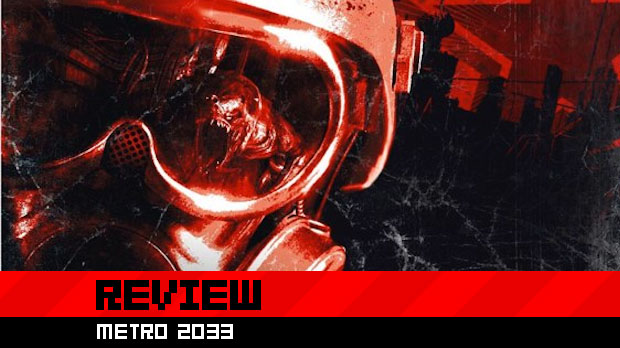 Well, Destructoid never officially reviewed Metro 2033. I had multiple problems getting several copies to work on both Xbox 360 and PC, while Anthony Burch decided to write a not-review after making it to the third chapter and refusing to indulge it any further.

Having finally got the game working on PC, and beating it this weekend, I felt it a shame that we did not review the game. Thus, history is to be rewritten. 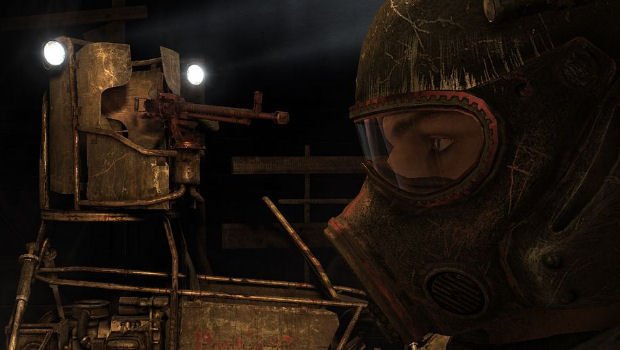 Metro 2033 is a unique game, despite how its gritty, post-apocalyptic visuals and first-person-shooter design may make it appear. As Artyom, a young Russian man born in the underground home of Moscow’s post-nuclear survivors, players must navigate the Metro, a sprawling network of train tunnels and stations-turned-cities that house communists, Nazis, and brigands. Oh, and the occasional person who isn’t an asshole.

Strangely, for a game based on a novel, Metro 2033‘s story isn’t all that detailed. A narrative is there, and it’s quite a decent one, but nothing really feels fleshed out. The idea of a world where conflicting ideologies have been taken out of context by the survivors of nuclear war is a powerful and intriguing one, but it’s never explored at more than a surface level (which is a criticism I have heard of the book as well). I’d love for the unique and genuinely interesting world of Metro 2033 to be given more flesh, but you only ever get a taste of the story, never a full bite.

On the surface, Metro 2033 is a first-person-shooter, but it has also been quite rightly described as a survival horror and it is perhaps one of the most traditional survival horrors to be seen in years. Enemies are dangerous, to the point where absolutely any encounter in the game is capable of killing the player. Hideous monsters are fast and resilient, while human opponents are heavily armed and often armored. Meanwhile, the player’s supplies are consistently low. In fact, the enemy nearly always has the advantage over Artyom, and wits are the way to win, not superior firepower. 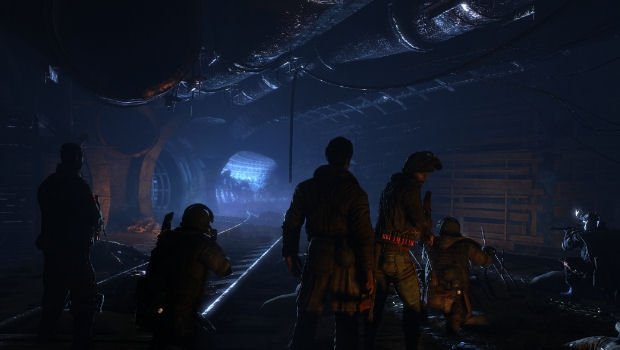 What this leads to is a game that is perhaps one of the most stressful I’ve played in a long time. That’s not a bad thing, either. Metro 2033 is oppressive, where every battle is escaped by the skin of one’s teeth and every step forward could lead the player into a trap or a death-dealing ambush. If you’re in the wrong frame of mind, Metro 2033 is not fun at all. It’s downright horrible. If you let it “click” with you, however, it becomes obsessively engrossing.

There are definite balance issues. It should not require three consecutive, close-range shotgun blasts in order to kill a human being, especially when Artyom himself is incapable of taking even half that much damage. Likewise, headshots against enemies are only sometimes rewarded with an instant kill. Most enemies wear helmets, which seem to require upwards of three headshots. The sniper rifle, for instance, seems like a waste of time, since a headshot rarely succeeds in killing an enemy, and once the entire opposing force is on alert status, you’ll never get another chance to pick your target without getting chewed by opposing gunfire.

Likewise, the game’s attempt to create a cat-and-mouse combat situation doesn’t entirely succeed. You can see what 4A Games was going for — you can blow out lights to create darkness, there are multiple paths in any combat zone to allow outflanking, and you have to avoid broken glass or alarm systems to move and kill silently. Sadly, the enemy AI is not quite equipped to handle this. Enemies always see you in the dark, despite the game telling you otherwise, and your attempts to outflank usually end up with the enemy simply spotting you regardless of your position. 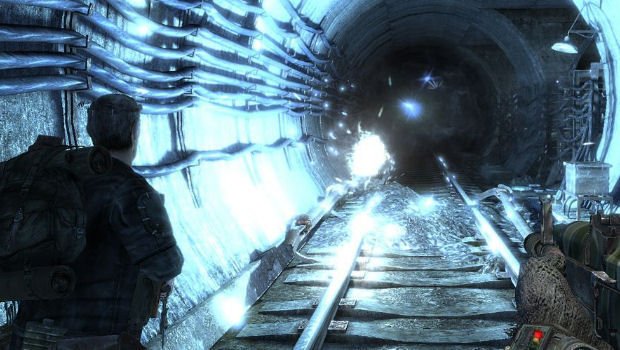 These issues make it feel like 4A was cheating in order to make the game more tense, and I think that does a disservice to what the game does right. Metro 2033 didn’t need to cheat with its damage ratios and AI in order to create a tense game. Artyom’s endurance is low and he is always outmatched regardless. If he is shot, it almost always reduces him to a sliver of life, which can take up to twenty seconds to regenerate, unless you have a quick-heal medkit. The game does not want you to get shot, and if you do, death is more than likely to follow. To any run-and-gun shooter fan, this sounds horrible. If you’re in the right frame of mind, however, this approach to combat — where you need to concentrate on survival more than murder — is intensely satisfying, and every escape from death is a relief while every victory is cause for elation.

The most obvious survival horror elements are to be found with the weapons and ammo. Like all good horror games, your resources are far from plentiful. Even more troubling, weapons are often unreliable, with weak bullets, inaccurate sights and plenty of kickback. As you progress through the game, you can acquire better weapons, but even the best upgrades feel improvised, like tinpot creations from people who have done their best to make a gun that won’t fall apart.

As far as ammo goes, every bullet feels precious. This is typified by the “military grade” bullets you can find littered throughout the game. Military ammo is more deadly than regular, factory-made ammo, but they’re also highly valued because of it. As such, military bullets have become the currency of the Metro, and if you choose to use them in combat, you’re effectively shooting money at enemies. Without your military bullets, you can’t buy supplies or weapon upgrades. 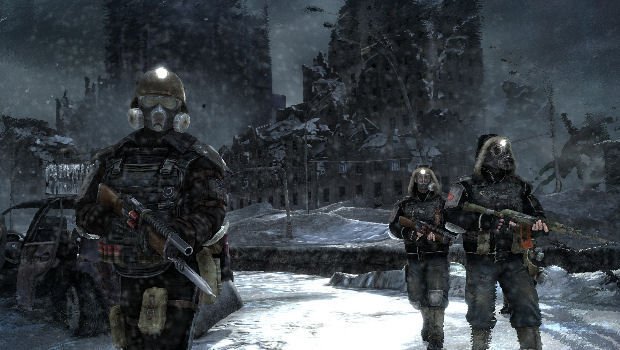 Fortunately (and this may be the result of a patch), there’s always just enough normal ammunition to get the job done if you’re a thorough looter. Enemy corpses usually have all sorts of bullets strapped to their bodies, and there are various caches littered around any level. The satisfying loot-grabbing of a roleplaying game is evoked in Metro 2033‘s gameplay, except unlike an RPG, you’re not getting cool gear that might boost your stats or look pretty — everything you loot is vital to survival.

Even exploring less dangerous areas challenges your resolve. Your flashlight, for example, needs regular recharging by pulling out a battery pack and pumping it up to generate more power. There are various excursions to the blasted surface of Moscow, which requires the use of a gas mask. As with everything in this game, you’re required to survive on essential supplies, scavenging filters to keep the air in your mask fresh. Every second spent on the surface feels like a step closer to potential death, and it’s glorious, in a peculiarly nerve-wracking way.

Metro 2033 gives you enough to survive, but it only ever gives you the bare minimum. The feeling of “making do” permeates the entire experience, and it all adds to the incredible atmosphere that’s been set up. Whether you’re fighting neo-Nazis or mutated mole monsters, this is an intense and pretty scary game. You can never guarantee that your next action won’t kill you, and even early fights against bottom-feeding bandits can take a very long time to win as you constantly change position and attempt to get the upper hand on an entrenched foe. 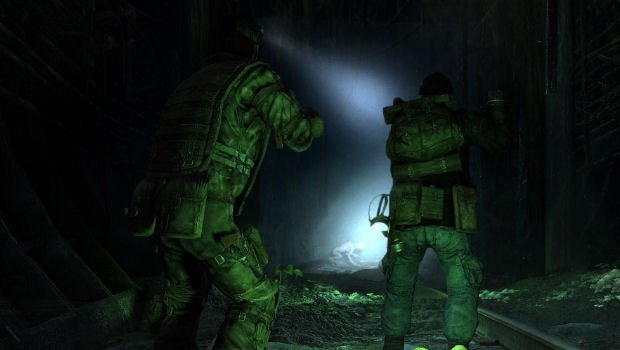 This atmosphere bleeds into the non-combat portions as well. Throughout the game’s linear story, you’ll encounter various metro stations, which have formed their own societies and ideals. You can shop for new supplies, advance the story, or just listen to the impressive amount of conversations that NPCs engage in, fleshing out this miserable, pitiless world. The Metro stations really feel like they’re bristling with life, albeit life that’s desperately hanging on by a thread. It can be difficult to really nail immersion, and few games do it so flawlessly as Metro 2033.

It helps that the game looks pretty stunning, too. On PC, there are some widespread framerate issues that can’t be resolved using the in-game options (but are fixable, if you root around), and character animation leaves a little to be desired, but the environments are gorgeously detailed and the enemy monsters are particularly loathsome and disturbing. I love the voice acting, too, with genuine Russian accents that do a great job of communicating a grounded sense of character. Use of music is rare, but when it does, it’s almost always evocative and poignant. 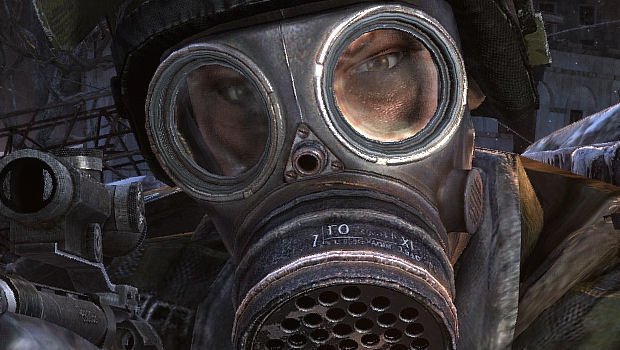 Your enjoyment of Metro 2033 hinges on your willingness to let a game batter you into submission. It wants to be played in a certain way, and if you’re unwilling to meet the demands, you’ll be thrown out on your ass. More than any other shooter, you’re not playing as a powerful hero. You’re a young man, unarmored and barely armed, who is constantly, unrelentingly, fresh out of luck.

Such a game is most certainly not for everybody. Those that can get into it, however, will really get into it.