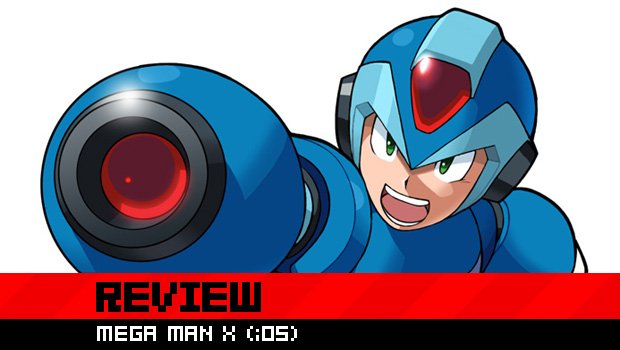 After five NES entries with a sixth one looming, plus five Game Boy spin-offs, players were understandably getting tired of the classic Mega Man formula. The first Mega Man developed for the Super Nintendo, Mega Man X, was the much-needed refresh that evolved the franchise. It retained the core of what made its predecessors so addictive while introducing an entirely new cast, faster gameplay, an upgrade system, edgier music, sleeker graphics, deadlier enemies, and much more. In short, it was just plain cool.

Capcom set out to revive the series and succeeded. To this day, Mega Man X remains not only one of the best Mega Man games (if not the best) but also one of the best action platformers ever made. You don’t have to be a Blue Bomber diehard to agree with that sentiment.

Remaking a game that was so golden to begin with requires a careful preservation of everything that made the original so beloved. When it came to remaking Mega Man X on iOS, Capcom failed big time. 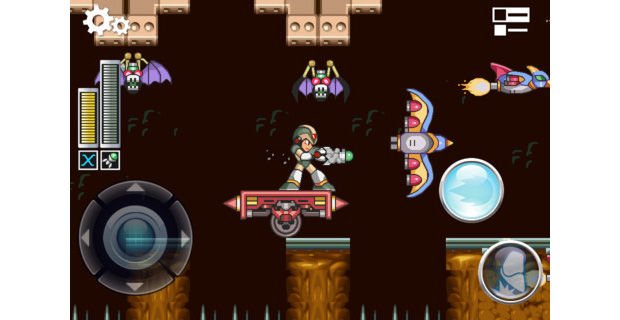 The first thought that sprung to mind when I heard of Mega Man X for iOS was, why isn’t this a port of Maverick Hunter X? Maverick Hunter X is the PSP remake that was to be the first in a long line of portable X remakes, but low sales grounded those plans. The game bombed on the market, but not for lack of quality — it’s a decent effort that deserves more exposure. Since other DS and PSP games have appeared on iOS, this would be the perfect opportunity.

Instead, it’s an HD version of the of the original with a slew of hiccups and curious alterations. By “HD,” I mean that a smear filter was applied to smooth out jagged pixels and sprites were slightly redrawn, but no extra detail was added. Backgrounds and surfaces look fine, but some enemies look a little worse for wear. In extreme cases, you get disgusting results such as this: 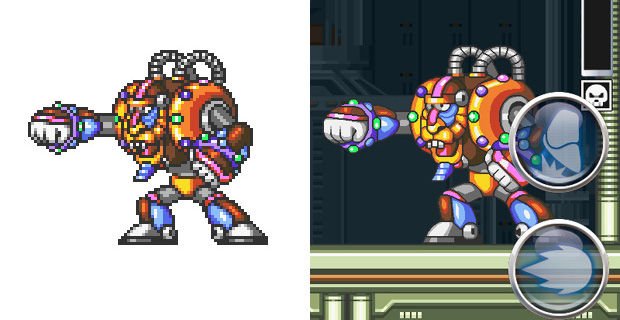 This is Spark Mandrill. On the left is his SNES incarnation, a vicious mechanical primate with sharp fangs. In the update, he looks like Cletus the Slack-Jawed Yokel. I can’t even look at the original sprite anymore without seeing those goofy buck teeth.

Lack of physical buttons is often a major complaint with games on iDevices, but I can honestly say that they are the least of this game’s problems. Touch controls are always going to be a point of contention, so let’s leave that aside. What really hurts the game are the host of niggles that could be easily overlooked on an individual basis but, when taken as a whole, make Mega Man X vastly inferior to its SNES incarnation.

Before you start a new file, make sure to enter the options menu and change the screen size from “full” to “regular.” By default, Mega Man X takes a page out of the BioShock playbook and fakes widescreen by cropping a chunk of the whole image. As you can see in the example below, not only does a “full” screen make it difficult to gauge oncoming dangers, the virtual buttons obscure the screen even further. There is another option to reposition the on-screen controls, and they can be moved into the border of the “regular” display, thereby giving you a complete view of the action. That these adjusted settings aren’t the defaults is mind-numbingly counter-intuitive. 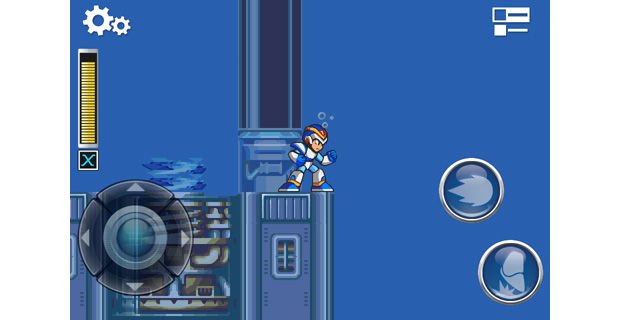 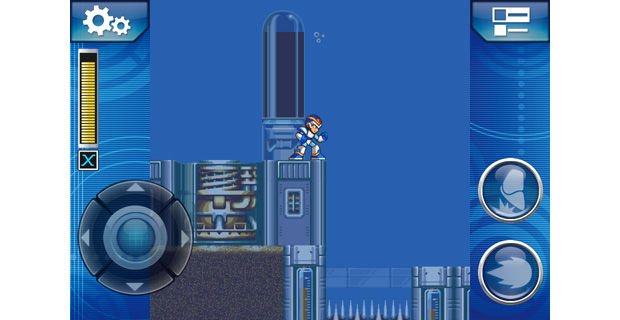 Movement speed has been considerably reduced. I’m guessing this was a concession to balance out the less responsive controls, but now it feels like everybody is running through Jell-O. Compared to the original X and its trademark speed, this version is running in “permanent slowdown” mode.

Another high mark for the original X was how each level was one seamless environment. In the NES Mega Man titles, there would be transitions when you reach the edge of the screen traveling vertically or across some other designated boundary. In X, there were no boundaries, allowing for huge, open areas with no flow-breaking pauses.

On iOS, levels are split up into “rooms” — once you reach the end of one area, the screen will cut to black as the next area is loaded. The iPhone is a powerful device capable of much more than the two-decades-old SNES, yet the programmers of this remake couldn’t figure out how to load an entire stage at once? To top it off, with few exceptions, you can’t return to a previous room. So much for freedom from restrictions. 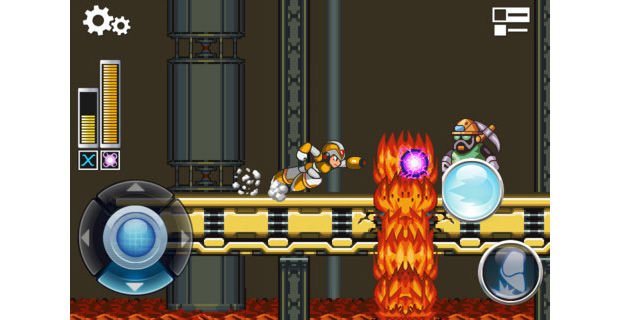 In the original X, clearing certain levels would trigger an environmental change in others, making the levels easier or granting access to otherwise unreachable items. For example, if you beat Chill Penguin’s stage, the molten metal in Flame Mammoth’s stage will cool over, allowing you to safely walk on the surface and obtain the level’s health-increasing Heart Tank.

These environmental triggers have been completely removed from the iOS version. So then how do you obtain the Heart Tank in Flame Mammoth’s stage? Simple: it’s been moved from atop the molten metal to a platform out in plain sight. No longer is there any incentive for tackling stages in a certain order. The levels have also been slightly rearranged to reduce difficulty and the need for exploration.

The four armor upgrades from the original X are still here. Older fans will remember that the hardest upgrade to acquire was the buster enhancement, which granted a stronger charge shot and the ability to execute secondary functions of acquired weapons. If you fail to obtain the upgrade, you will be automatically given it during the first level of Sigma’s Palace. Zero will sacrifice his life to save yours, then he’ll relinquish his own buster before finally shutting down. 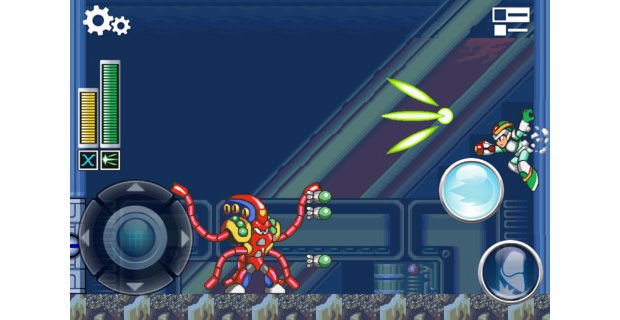 That doesn’t happen in the iOS version. Whether or not you possess the buster when you approach the dying Zero is irrelevant. On the SNES, this was a pivotal plot moment — the passing of the torch from the veteran to the rookie, a memento from your friend and mentor that you will carry into battle. Here, it carries no weight whatsoever. How difficult is it to have a check in the code that says, “If condition A is satisfied, trigger event B, else trigger event C”? Why does it feel like corners were cut when they never needed to be cut in the first place?

The absence of Zero’s parting gift, the lack of environmental triggers, all the other issues I mentioned — there is no technical reason why these changes were implemented. They don’t improve the game at all; on the contrary, they only take away from the spirit of the original.

But the worst is yet to come. As in many iOS games, there exists a store where you can spend real-world money on tools to make the game easier. For just a few dollars, you can instantly acquire all the Heart Tanks, all the health-restoring Sub Tanks, all the armor pieces, and all the boss weapons before you even start a new file. 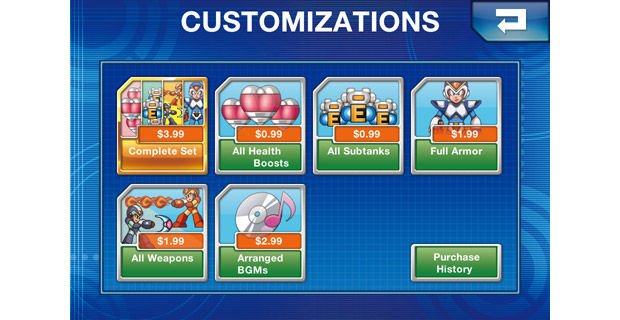 I understand that there are folks whose time and patience are so limited that they’ll gladly pay to reduce the required time investment. Still, it’s one thing when the game in question was made explicitly for this segment of the audience. It’s something else entirely when the game is adapted from a 17-year-old title that was enjoyed long before the acronym “DLC” was coined. The upgrades in Mega Man X helped to tone down the high level of difficulty, but if you wanted them, you had to go out of your way and put forth the effort to earn them. And even though you could bypass most of the game via passwords, those passwords weren’t locked behind a pay wall. You could approach the game however you desired without being held to ransom.

By implementing a store in a game that originally had none, Capcom is basically telling us that it has little faith in today’s gamers to motivate themselves, to experiment, to explore, or to endure. It saddens me that such a masterpiece has to be toned down to meet the demands of a segment of the population that most likely wouldn’t be interested in a game like Mega Man X to begin with.

There exists a brand-new “Easy” mode, where enemies are fewer in number and most bottomless pits are covered up by platforms à la Mega Man 10. It’s a gentle guiding hand that doesn’t prevent players from discovering the game for themselves. Isn’t that enough? I guess it’s not. 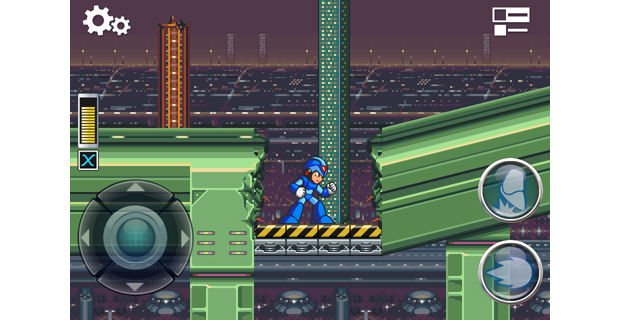 Of course, all this blathering comes from vantage point of a long-time Mega Man X fan. What would I say to those who have never experienced Mega Man X in any form? Is the iOS remake an adequate introduction? Truth be told, if you look past all the bullshit, it’s still the same intense action platformer we all remember. It certainly isn’t unplayable, and there aren’t any glaring bugs that break the game. If you have the will to succeed, I doubt you’ll come out disappointed.

Then again, it’s not as though there aren’t better options available. If you want a remake done well, Maverick Hunter X can be downloaded on the PSP or the Vita for $9.99. If you prefer the no-frills SNES classic, it can be downloaded from the Wii’s Virtual Console for $8. If you have access to any of these machines, you shouldn’t have to settle for a lesser experience just to save a few bucks.

For long-time fans, Mega Man X on iOS is at best tolerable and at worst insulting. It’s a “remake” rife with unnecessary alterations that only serve to make it feel more dated than the original game. If you’ve never played Mega Man X before, you might find enjoyment in this mobile version, but with superior alternatives readily available elsewhere, why should you even bother?