I really enjoyed my time with Mayan Death Robots at PAX East this year. My buddy and I played a few matches and left anticipating its eventual release. Now that it is released, I was excited to jump in and see the final product.

As someone who somewhat-regularly hosts local multiplayer game nights, I look forward to including Mayan Death Robots into the rotation, even if it is just for a match or two. If you’re not in my position, well, maybe this isn’t for you. 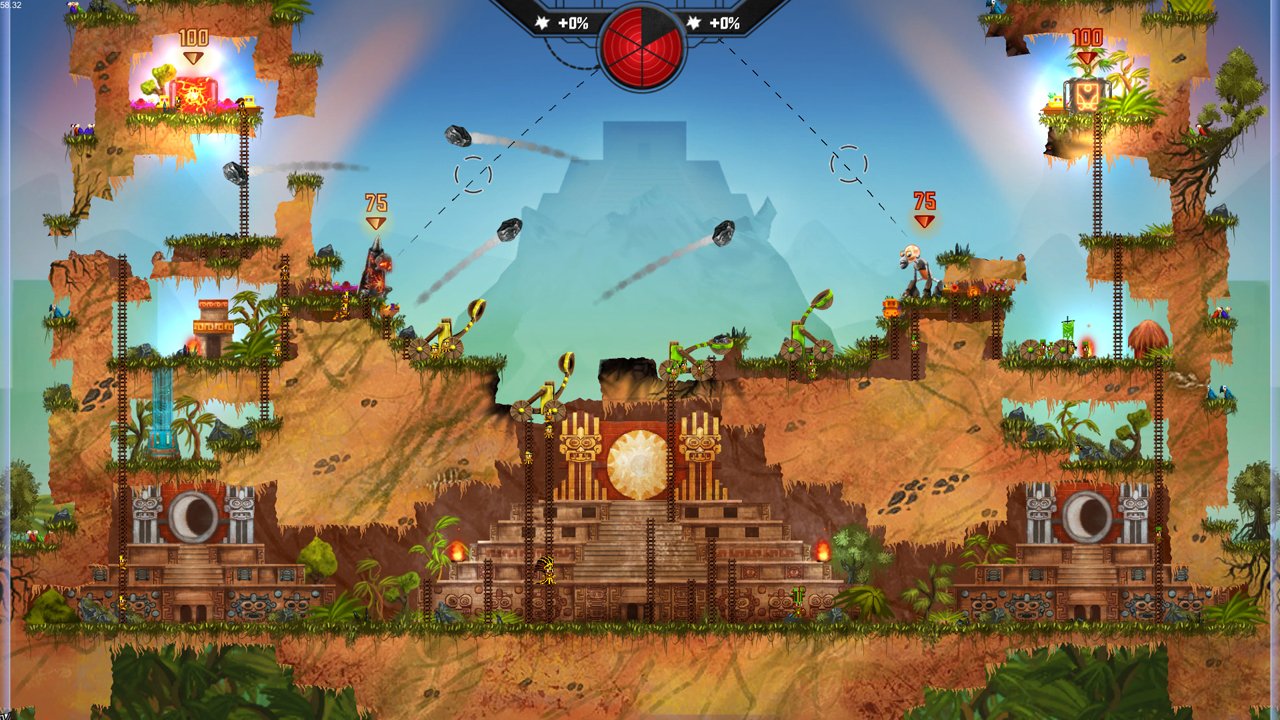 Mayan Death Robots pits two giant robots against each other as a television sport for other robots, I suppose, to watch. Each season of this television show chooses a new planet, and it just so happens that this season is on Earth around the 1500s. The premise is loose and really only serves to usher the player from one mission to the next, but it’s definitely cute.

Mayan Death Robots is a 1v1 match that plays out similar to the classic Worms games. Players pick one of the eight unique robots and are then plopped into a battlefield. The objective of each game is to destroy the opponent’s Core, which is a small box somewhere behind them. In the way, however, is plenty of terrain as well as the enemy robot. Each robot has two types of attacks, the ability to jump, and the ability to create new terrain.

That last bit is interesting; each player can create terrain in the form of Tetris blocks anywhere within a certain radius of their robot, as long as it’s not floating mid-air. This allows some interesting defensive play in a game that would otherwise be entirely offensive. There’s a limit to the amount of blocks, and using it consecutively yields less and less blocks.

Turns happen simultaneously and publicly. There’s a short time period to choose an action, then another time period to aim said action, then both players’ actions happen at once. However, knowing what an opponent is going to do doesn’t mean it can be stopped. If a player sees their opponent shooting straight at the core, that shot will go off. Shooting the ground beneath them or the robot itself won’t affect anything since both shots are fired at once.

Tiny pixelated Mayans roam about on each player’s side, worshiping the giant robot from the sky. Killing the enemy’s Mayans will grant a bonus to the explosion size of the player, but it’s rarely worth it to fire specifically at Mayans; it is usually just an added benefit of firing at something else. Mayans will also attack the enemy robot if they stand nearby. This is legitimately useful, since they are constantly doing damage while the turn timer is ticking down, and it prevents the opponent from jumping right next to the Core and blowing it to bits.

Every so often, an item wheel will spin and award both players randomly selected items. These items are one-time use, but provide some variety to the gameplay that can start to feel tedious after long play sessions. The game incentivizes the player to use the item quickly, since they are lost upon death. If a player is dead when the wheel spins, they do not receive the item.

The core gameplay is great. Playing against another human can lead to intense back-and-forth matches. Multiplayer supports two players locally (no online) with either gamepads or the keyboard. It’s a nice feature that both players can use the keyboard, since not everyone has controllers for their PC. An odd omission is the total lack of mouse support, even in menus. In a game that focuses on aiming precise shots, it would have been a boon to be able to use the mouse. 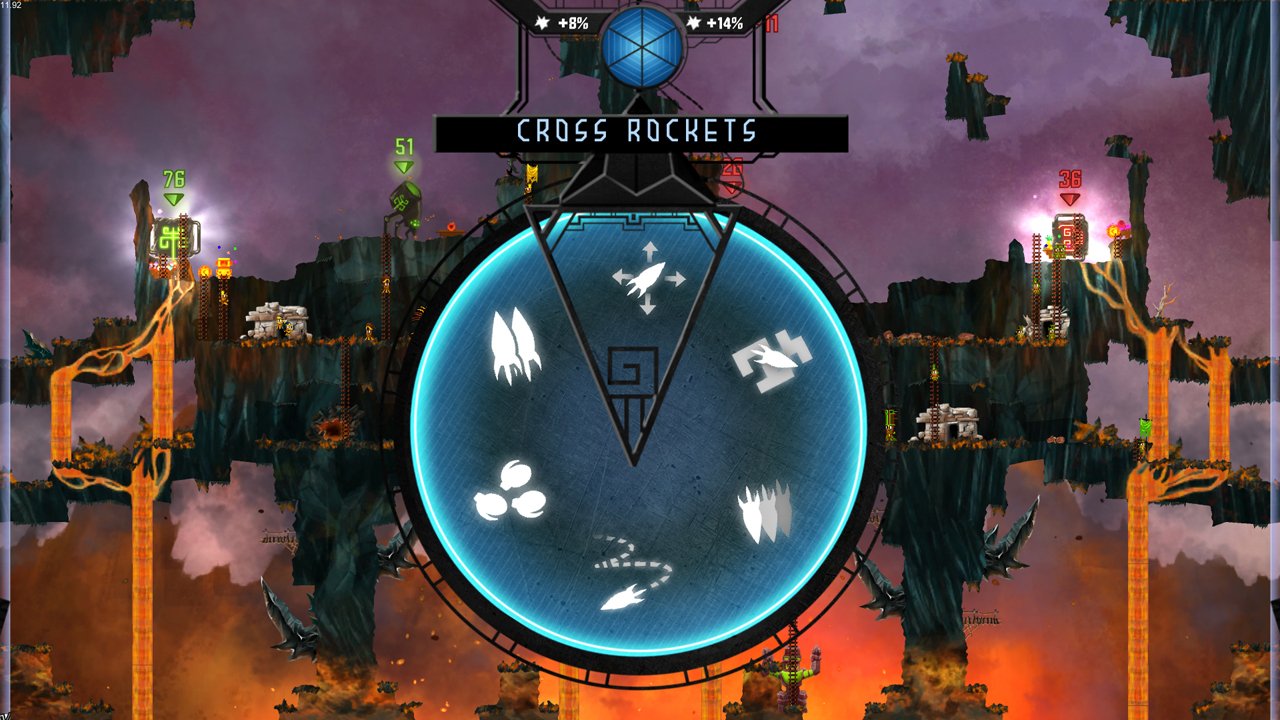 Perhaps the most unfortunate aspect is that players are forced to unlock the playable robots and the more interesting items. Of the ten robots available, six are unlocked from the start and the rest are acquired through the campaign. While I understand the necessity to give the player a feeling of progression, those who buy the game and just want to play with a friend will be disappointed. Luckily, the campaign can be played through with a buddy.

All of the robots feel different from each other, despite the only difference being their two attacks. Some of them have special properties, like having their attacks become more powerful the longer they are in the air, or being able to shoot through certain terrain. While they feel unique, all robots play very similarly: get into a position that your attacks benefit from, and shoot away. Each match has the potential to be an intense back-and-forth or a complete slog; it all depends on the players (or AI) involved.

The campaign is set up as a series of over 30 “episodes.” There is no tutorial, but players will likely pick up the mechanics quickly. Occasionally, these episodes will modify the standard gameplay by adding stage hazards. These hazards tend to be either incredibly annoying or completely useless. Only rarely do they affect gameplay in a unique, interesting way. 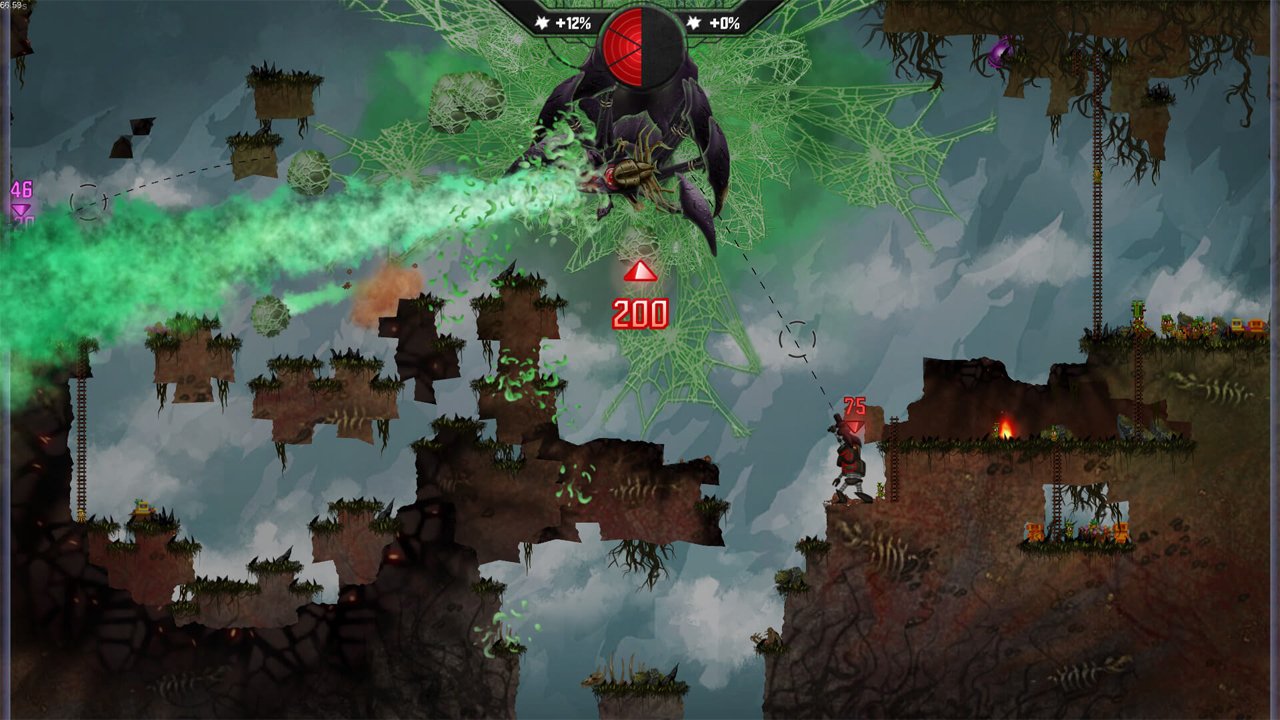 There is also an occasional stage boss, which removes the cores from the map and asks both players to destroy the monster. This is great, if you’re playing with another human. Cooperating with the AI is downright awful. You see, the boss has to be “summoned” by performing certain actions on the map, but the AI doesn’t give a shit. The AI is more concerned with destroying the player’s core, making it a huge pain to even get the boss to appear most of the time. If the match ends before the boss is summoned, the player must restart the level.

The bosses each have their own mechanics, which are very hit or miss. Some bosses, like the map modifiers, are more annoying than they are worth. Plus, after defeating a boss, the cores come back and the match continues like normal. It’s a strange cooperative-to-competitive swing that just feels random.

Other than the boss levels, there is no way to lose a level while playing the campaign. Sure, the AI can win, but it doesn’t matter, the player progresses to the next stage anyway. This makes sense if two humans are playing each other, since one will always win, but not when playing solo. There’s no incentive for a single player to win…at all. There are no rankings, stars, or scores to do better in, there’s no leaderboards, nothing. A solo player could go through each level and lose, as long as they summon the boss in the boss levels, and progress through the entire campaign and unlock everything. 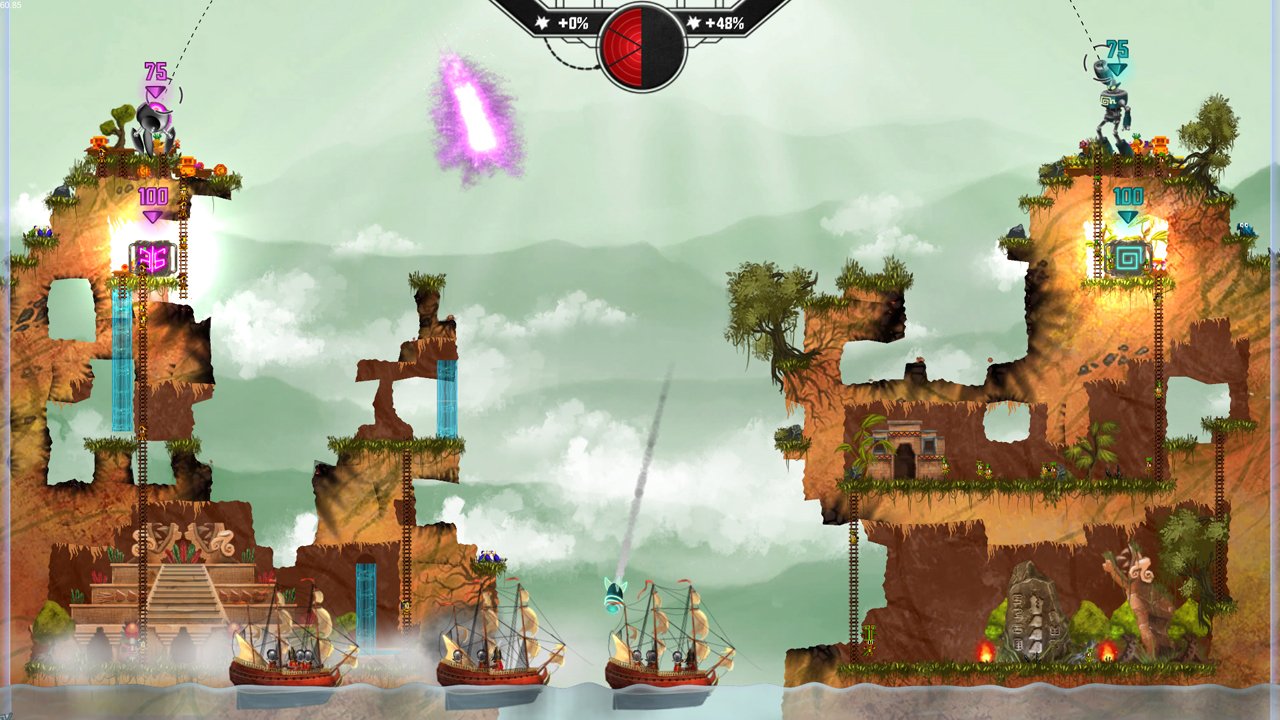 There’s also a Versus mode which is as straightforward as they come. Players can only compete on the modified maps by going through the campaign and selecting that specific episode to play on, but it would have been great to be able to choose these modifiers from a list in Versus mode, potentially mixing and matching some to create some zany situations. Unfortunately, nothing of the sort exists. Versus is as vanilla as it gets.

Despite my enjoyment of the game mechanically, I cannot recommend Mayan Death Robots to anyone looking for a worthwhile single-player experience. For those wanting another entertaining local multiplayer game, however, it provides some unique strategic gameplay. It likely won’t keep players enthralled for hours on end, but serves as a great addition to any local-multiplayer library.