Max and the Magic Marker has had a handful of releases on various platforms and it’s back again, this time on the PlayStation Network under the prestigious moniker Max and the Magic Marker: Gold Edition. Critical reception for the game’s previous releases was generally positive, so the title has come to PSN to strut its stuff, boasting new levels since the original release and PlayStation Move support.

The game is a physics-based, 2D platformer — a genre that seems to be in vogue — that attempts to distinguish itself from the pack with its whimsical art style and magic marker mechanic that requires the player to draw structures that can then be used to traverse environments. Are those elements enough to elevate it above similar platformers? 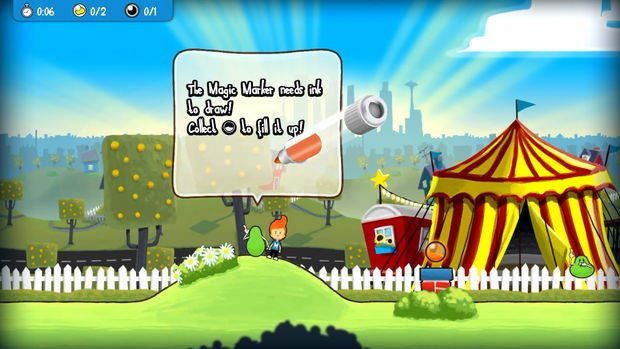 Max and the Magic Marker opens with a little boy named Max who sports a bit of a Phillip J. Fry hairdo and receives a marker in the mail. With it, he inadvertently creates a mustachioed monster that looks a bit like an eggplant. When the monster breaks free from the confines of Max’s drawing pages, Max decides it’s his duty to rid the world of his abominable creation.

The game is charming at the onset because of its whimsical art style. The world is vibrant, bubbly, colorful and cleanly rendered. A push of the square button freezes the game, save for the magic marker, and to help distinguish between the two states of being in the game, the art style also changes when paused, to rudimentary crayon drawings of everything that was on screen when the game was paused. It’s a cute touch that adds personality.

The titular mechanic, the magic marker, is a fun one, albeit a not completely new one. The marker begins devoid of ink at the start of each level and requires the player to track down orange ink orbs to slowly fill the marker, allowing bigger and better things to be drawn. The marker, controlled with the right stick, can be used both in the “frozen” mode and while Max is moving around, and makes for some fun scenarios. Though it’s most frequently used to create simplistic platforms and bridges, the game occasionally requires you to do some interesting things with it, like drawing a seesaw, planting yourself on one end, and dropping something on the other to jump higher. 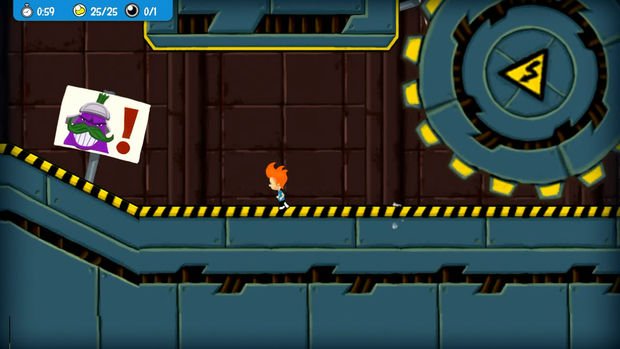 Max and the Magic Marker consists of about 60 platforming stages split evenly between three different locales: Max’s neighborhood, a pirate-themed island, and a place with a machinery/laboratory vibe. The actual platforming is a bit simplistic, but serviceable. I came across a few bugs and hiccups, like Max getting stuck in midair hanging onto some invisible ledge that wasn’t there, but they were rare and never really frustrating because the stages are typically short.

Gathering all of these orbs awards you two of the three possible stars, while earning the third star requires you to complete the level in under a set amount of time. However, most of the levels are fairly linear and don’t require you to go too far out of the way to collect everything.

One pretty cool thing the game does with its collecting system is occasionally hide the black orbs in clever ways. On some levels, they are nowhere in sight and finding them requires you to do various things to make them appear. For example, one level starts with a soccer ball flying towards the net behind you and if you jump at the right time and keep the goal from being scored, the soccer ball turns into the level’s black orb. Unfortunately, these clever tricks aren’t applicable to most of the game’s black orbs, which sort of sums up the game’s main shortcoming, which is that it’s a bit too easy. 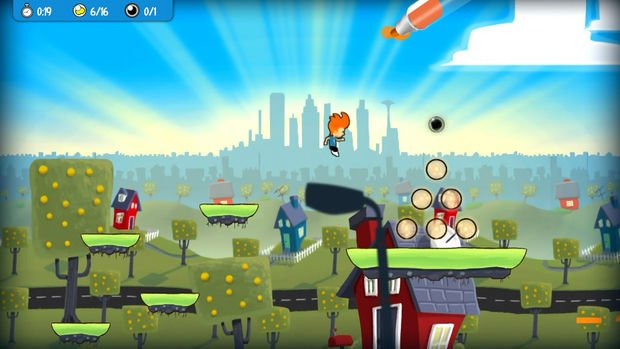 As mentioned prior, though using the marker can be a lot of fun, only rarely are you called upon to do something really clever with it out of necessity. The game’s platforming is also rather mediocre, which is why it’s puzzling that the last third of the game, easily the most bland and monochromatic locale, eschews the use of the marker in a lot of instances in favor of standard platforming mechanics with little personality, like “run from the big thing” and “don’t touch the lasers,” the latter being particularly infuriating in some instances.

Enemies are also rather uncommon and there are basically only two types. Combating these foes involves drawing heavy things to drop on their heads, which is often too easy, especially given the “freeze time” mechanic, yet it’s also oddly aggravating, as the game seemed too temperamental in deciding which drawings would defeat enemies.

Sometimes, I would drop a tiny fragment of a drawing from right above an enemy’s head and it would disappear, yet other times I would drop a hulking mass from halfway up the screen that would just bounce off of them. The game’s three boss fights against the mustachioed eggplant monster at the end of each section fall victim to the same problems; they’re simplistic and unrewarding.

I struggle with claiming the game is great for younger, uninitiated gamers because I cut my teeth on much more challenging, varied, and interesting platformers at a young age, but that audience is there. For the rest of us, Max and the Magic Marker is a cute and fun, albeit simplistic, romp through an upbeat, pretty, childlike fantasy world that does some neat things but struggles to stay consistently engaging.