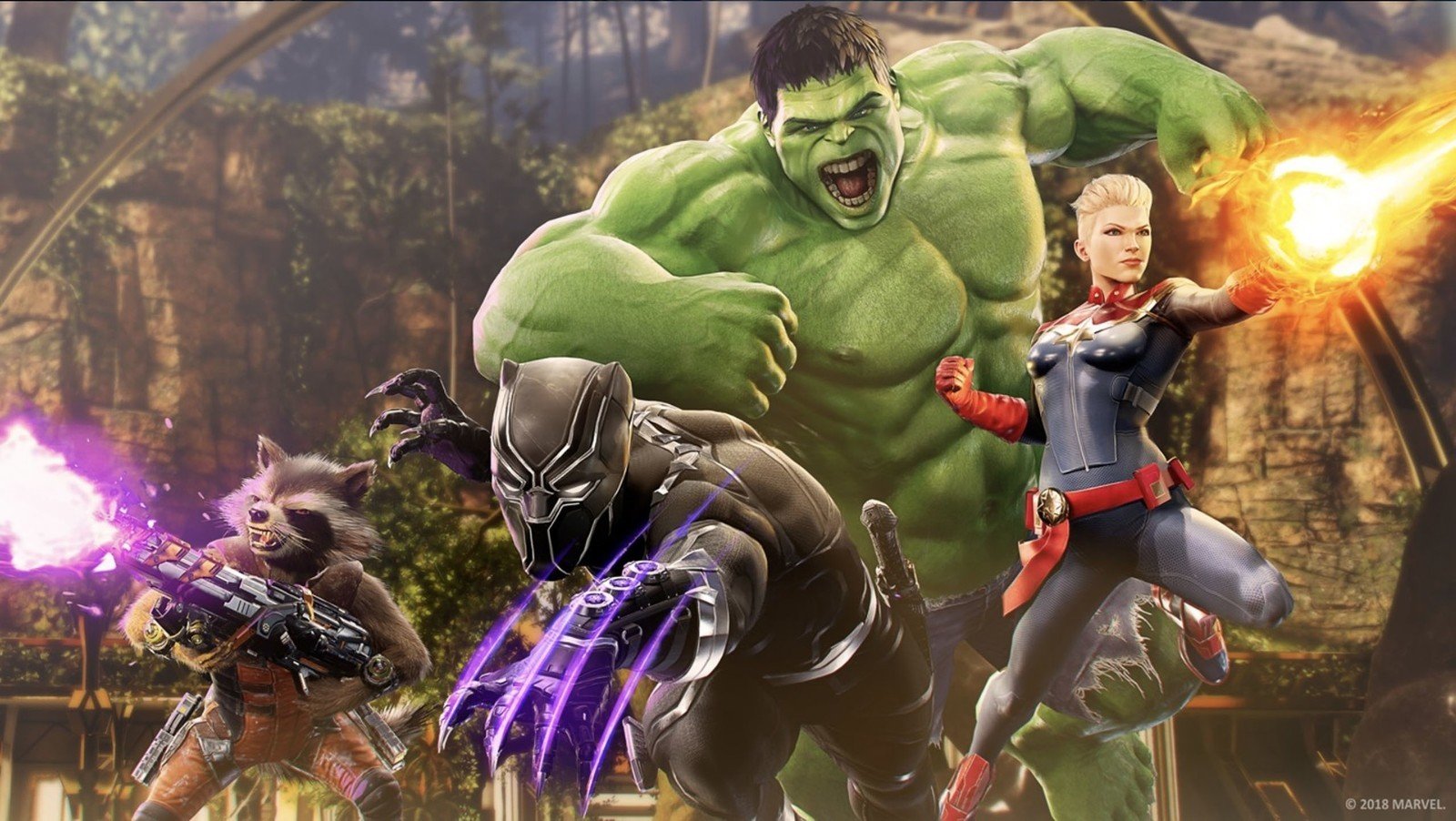 A progenitor for a killer VR system-seller

Marvel knows how to market the fantasy of becoming a hero to every facet of society, full stop. I think the culmination of that concept is the giant Hulk Gloves you may have seen at your local Toys”R”Us big box retailer. Selling back your childhood is a strong bullet point, and Marvel Powers United VR really taps into that mentality.

I’m going to dispel any notions that this is a free-roaming be-all-end-all Marvel experience right now — it’s a giant horde mode. A fun one, but still limited in scope.

When I was strolling through the prologue as Captain America and saw Spider-Man banter with other heroes in first-person, my eyes lit up inside of the headset. But again this isn’t a story-centric Marvel brawler, it’s a horde mode game. Just making sure you got that in case you need to check out now.

Following an intro that sets up the main conflict (a league of big-bads are terrorizing the world and you have to stop it), you’re free to access basically the entire game. All characters and arenas are ready at the start, further emphasizing how arcade-centric United VR really is. It’s overwhelming at first — 18 playable heroes is a whole heck of a lot and I spent many hours experimenting with them. Unless you’re a small child who only grew up on the MCU you probably won’t be devastated to see that a few heavy-hitters like Iron Man are missing. No, instead we get Ice Man, Storm, Wolverine, Spider-Man, and several others that have been absent from a lot of adaptations lately. Several Inhumans like Crystal and Black Bolt even pop in (Lockjaw is your hub guide).

To be frank I didn’t expect this many characters in a VR joint given how much developers/publishers typically skimp on content. Likewise the pool of villains digs deep with analogs to some of the heroes, showcasing MCU staples like Ultron and Thanos alongside of Venom, Lady Hydra, and Dormammu. Sanzaru and Oculus Studios did fine work in balancing the cinematic aesthetics with the source material (especially when you account for alt-costumes); as long as Wolverine is rocking his yellow spandex, I’m all good. DLC is also on the way and although Oculus didn’t specify what that actually entails there’s no way Iron Man doesn’t head up his own hype-fueled update at some point to reignite interest.

Every hero is somehow fun to play in their own way. Hulk is especially hilarious as you’re viewing the battle from his eyes — everyone else looks tiny by comparison. Having Spider-Man crack wise while you web up fools is fun, several characters can hover over the battlefield, and Deadpool can pull SMGs/pistols/katanas from different parts of his [your] body. No-look shooting an enemy with a pistol and then grabbing a grenade from your wrist is something that can’t be replicated outside of VR. This is bar-none the strongest aspect of United VR and its main selling point. Moment-to-moment combat overshadows many of its shortcomings.

The format does force limitations and a few aspects are too simplistic for their own good. Spamming abilities with some characters is an option, and each mission usually centers around the same type of “protect” objective if it isn’t just killing things, most of which are merely meat-shields. There is some depth involved and it mostly requires communication. Stunning enemies can set up team combos for more points, which in turns unlocks more extras. There’s also tiny nuances like queuing up extra damage as Spider-Man if he webs an item with both hands before throwing it.

Powers United controls very well in VR, and I was even amazed to find a real 1:1 movement system on by default. Point-based teleporting is in if you want that option, and turning is restricted to a fixed-angled setting by default. Thankfully there is a toggle for “free” turning, something that should be standard for all VR players who don’t want training wheels on. The only annoyance is that dropping down a level will turn the screen black momentarily to prevent VR sickness (add a toggle for that too!).

One major thing that holds United VR back is that it’s mostly built on the back of matchmaking. There is a solo option but it feels like an afterthought given that it doesn’t let you to pick your own AI (remember selecting your dream team in old-school Marvel games before the licensing was a nightmare?) and they have mediocre-at-best sensibilities. This also needs to be mentioned, but Marvel Powers United VR has cosmetic loot crates. My pitchfork lowered once I realized you couldn’t buy them piecemeal — though this is 2018, so that could change (and it’s entirely possible Marvel or the powers that be wanted a failsafe for their investment).

I can’t stress enough how bombastically arcadey Marvel Powers United VR is, and how its shallow wave-shooter nature is going to turn off a lot of its potential audience. If you’re looking for an epic sprawling all-star experience this isn’t it, but I hope this fun brawl-focused base eventually leads to that and continues to improve over time with ongoing support. This is the kind of game that needs to be tweaked and sent off to every single VR headset imaginable to grow its audience (so that you can find matches in six months), but for now it lives in the Oculus ecosystem.