“Another Mario Party? Good grief. Is there really any way this game could give us something we haven’t already gotten from the Mario Party series? Is there going to be any reason to buy this game over the seven other Mario Party titles available on the Wii, or Wii Party, or any of the other mini-game collections that have flooded the Wii market since day one?”

Those are the questions that filled my head as I limply held the box for Mario Party 9 in my hand for the first time. After playing the game for about two hours, I had some answers. Then I played the game for 20 more hours, and I had some fun. 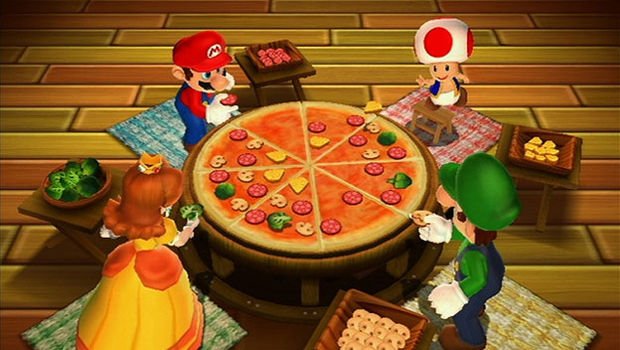 The first 20 minutes of Mario Party 9 only offer a few token changes that may not even be noticeable to anyone but diehard Mario Party fans. Dig a little deeper, though, and you’ll find that Mario Party 9 really isn’t like all the rest. The host of this virtual game show, Mario, is the same, but the rules are very different this time around. That comes as less of a surprise after you discover that the title was developed by a brand-new team.

This new team put together a title that feels more like a true Mario spin-off, and less like a stereotypical “party” game. As someone who has never been particularly enamored with the Mario Party series, that’s definitely a change for the better. 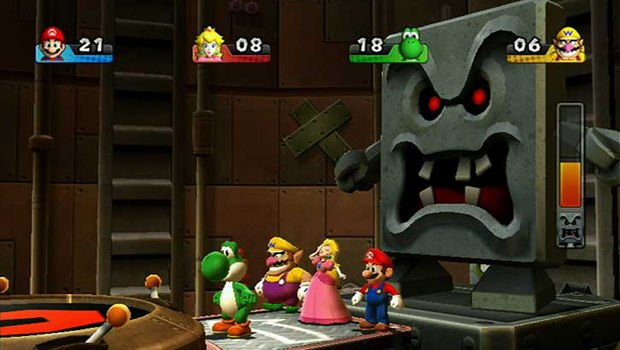 There is a much more balanced mix of motion-controlled and “standard” games this time around. A lot of the games are played with the Wii Remote held on its side, with either Mario Kart-style motion controls or no motion controls at all. While Mario Party 8 was released when motion controls were riding high, Mario Party 9 has seen release in the post-New Super Mario Bros. Wii period of the Wii’s life cycle. Nintendo has learned that over 20 million Wii owners are happy to play a 2D home console Mario title with minimal motion controls, and they’ve taken that lesson to heart in the development of this title. 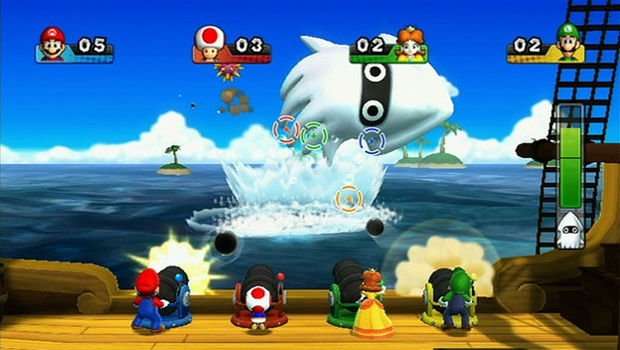 That’s really just window dressing, though. What’s more important is Mario Party 9‘s increased focus on videogame-y elements. There are now mini-boss fights, giant boss fights, more platforming levels, and maps that feel better with more branching paths and secrets. There are some moments when the uninitiated eye might glance at Mario Party 9 and think it’s an honest-to-god Mario game. That’s not something I think you can say for its predecessors. The games here are still simple and kid-friendly, but many of them feel much more like Mario experiences, and not just party games that happen to feature Mario-themed skins.

A lot of other changes reduce the level of “board game logic” present in the title. All players now drive around together in a car. That places everybody on the board in the same location at all times, which puts the kibosh on the “race to the finish” mentality that was present in prior games of the series. There is also only one in-game currency now, giving players just one way to win. These factors all work to make the game feel more “fair” and logical. That may appeal to those of you who prefer the 1’s and 0’s world of videogames to the thoroughly analog and unpredictable world of board games. 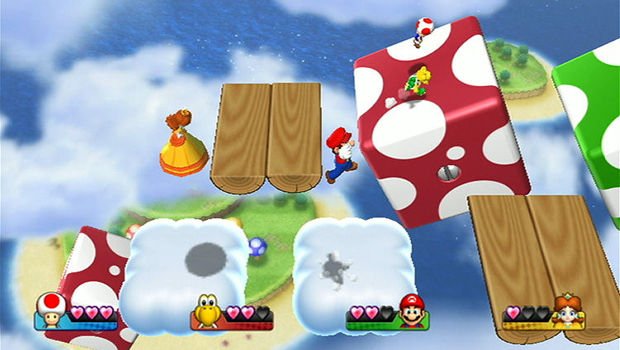 Mario Party 9 only takes that reduction of luck’s power so far; there is still a lot here that is determined by chance. All the players may be cruising around together in a car, but only the driver gets the positive (or negative) effects of landing on special spaces on the board. It’s still your dice rolls, not your own will, that determine exactly where you land. You can get a special die that will help you stack the odds a bit (like a 10-sided die, or one that only has 4s, 5s, and 6s on it), but you’ll still never be in full control.

Then there are the times that Bowser jumps out of nowhere and says, “Hey! You in 1st place! Fuck off, dude! I’m taking all your money and giving it to that guy!” Or the mini-game that just consists of watching a ball with your face on it fall down a hill, with the one whose ball hits the bottom first winning half your total cash. Moments like this work to remind the player that skill is important, but no one is above suffering the whims of Lady Luck. 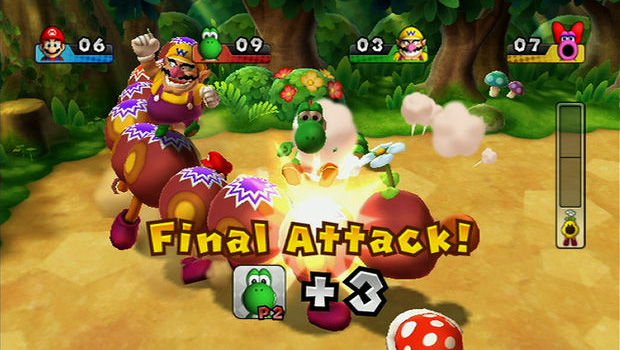 Mario Party 9 features less motion control, fewer board-game rules, and more of a videogame feel, but there’s still plenty left to chance. Those waiting for a full-scale overhaul will have to wait a little longer. If you’re like me — that is, you’ve always wanted the Mario Party series to be more than just Mario in name, you’ll definitely be pleased with the direction in which the series is headed.