Mario Kart 8‘s first DLC pack has Link riding a horse-shaped bike called the Master Cycle. And, good lord, Mute City from the beloved but still dormant F-Zero series. Also, a track based on Excitebike with a killer remix. Are you even going to read this review?

Don’t answer that. Let me have this moment.

I’ve always liked Mario Kart enough to want to play it with friends, particularly back in the N64 days when everyone else was obsessed and their enthusiasm seemed contagious, but I never loved the series — not until Mario Kart 8. That’s when everything clicked into place. I get it, now.

The handling feels right, the anti-gravity tracks are fresh, and just looking at the game is a joy. It’s not perfect — the lack of proper arenas in Battle Mode remains a huge letdown — but I love it.

Still, it only took a few months for me to lose interest given my usual fleeting attention span for racing games no matter how good they are. I’ve been wanting to get back into Mario Kart 8 ever since and that’s the main reason I was thrilled to learn about Nintendo’s plans for not one but two expansion packs. The Legend of Zelda and F-Zero and Excitebike and Animal Crossing in Mario Kart is cause for celebration. If those crossovers can’t pull me back in, I’m dead on the inside.

The first DLC pack is currently available, but the second won’t be here until May. I’m going to go ahead and recommend buying both right now assuming you have already purchased Mario Kart 8 and don’t regret that decision. The add-ons are $7.99 a piece or $11.99 together, and getting both will give you access to eight new colors for Yoshi and Shy Guy as a bonus.

Having more variations on Mario and Peach seems like a waste of character slots especially now that Nintendo is branching out to other series but three things turned my opinion of Tanooki Mario around: 1) he sometimes turns into a statue while performing tricks, 2) his eyes are far too mean for such a cuddly costume, and 3) his honking sound effect is a nostalgic treat.

But as much as I liked the cat costumes in Super Mario 3D World, the appeal is mostly lost in Mario Kart 8. We’re racing, Cat Peach, not running up walls. Sorry, but you aren’t needed here.

Link, on the other hand, is a crowd favorite. The bulk of the online matches I played were full of Link after Link and I don’t see that changing anytime soon. Everyone wants to be the hero (which is all the more reason to rock Tanooki Mario). He fits in well with the rest of the cast and should feel more at home once Villager and Isabelle from Animal Crossing arrive in DLC Pack 2. 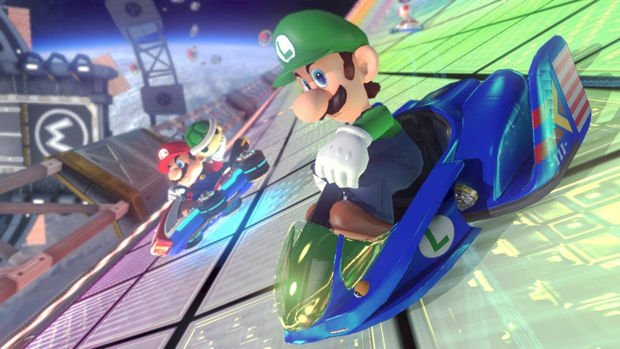 As for the new vehicles, my favorite ended up being the Blue Falcon from F-Zero, not the Legend of Zelda-inspired Master Cycle. While the kart’s stats aren’t exactly to my liking — I’ve traditionally stuck with heavy characters on the Sport Bike — its wheels are well-hidden and the design is so damn cool. When Mute City came up for a vote in an online match and literally every player chose it, I was happy to be repping Captain Falcon’s ride. Show me your moves!

The B Dasher, popularized by Mario Kart DS, has a neat Formula One look. There’s also the jeep-esque Tanooki Kart, but neither left much of an impression. I ditched them after a few matches. Perhaps I’ll come around just as I did with the tracks Rainbow Road (SNES) and Ice Ice Outpost. Frankly, I didn’t care for either course the first time around, but in subsequent playthroughs, I warmed up to them. A few heated online races can change your mind like that.

Wario’s Gold Mine, the first track of the Triforce Cup, had me immediately; it’s like racing across a wooden roller coaster. Going down dips is so much fun. The course returns from Mario Kart Wii with stunning new graphics (that sunset is something else) and an anti-grav section.

The next track in the cup is yet another Rainbow Road because we apparently can’t get enough. (It’s true.) This one is based on the original Super Nintendo Rainbow Road which should thrill long-time Mario Kart players. Thwomps crash down to create ripples in the track that you can boost off, but the timing is tough. It’s short, simple, and a hell of a good time in online races. 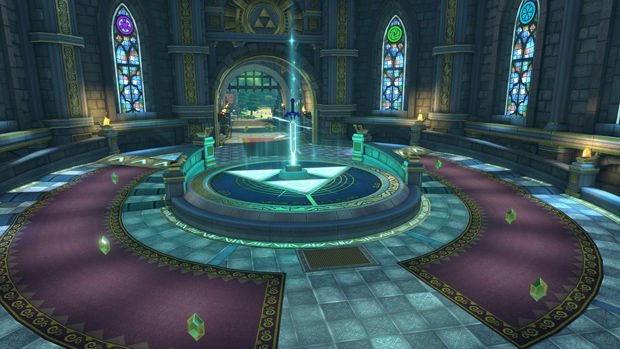 Ice Ice Outpost is perhaps the weakest of the DLC tracks — it’s not as alive with details as I would’ve liked — but that’s not to say it’s a bad course; more like underwhelming. The track is split up into two lanes that weave around each other and through icebergs, providing many opportunities to swap positions either intentionally or because some jerk knocked into you.

Hyrule Circuit closes out the Triforce Cup and it’s even better than expected. While roaring across Hyrule field, you’ll collect Rupees, not coins. Deku Babas replace Piranha Plants, and instead of Swoopers, there are Keese. Nintendo even swapped the item pickup sound effect for fanfare fitting of The Legend of Zelda. The track continues into Hyrule Castle and players can complete a little puzzle to boost over the Master Sword. If this is the standard we can expect from crossovers, I’m hopeful for the future of Mario Kart. Bring on Super Kart Bros.

The Egg Cup kicks off with Yoshi Circuit and the track’s numerous sharp turns still give me trouble just as they did in Mario Kart: Double Dash!! There’s novelty to racing on a Yoshi-shaped island, but the actual surroundings aren’t all that interesting (although it’s not like you can pay full attention to background details without going off course.) Challenging stuff.

Excitebike Arena is an oval track with tons of randomly-placed ramps to perform tricks off of and mud spots to avoid. That might not sound exciting but it ends up rounding out Mario Kart 8 nicely; there’s nothing else quite like it in the game. And that song! It’s a shame the DLC tracks aren’t compatible with Battle Mode given how well Excitebike Arena would work in that context. 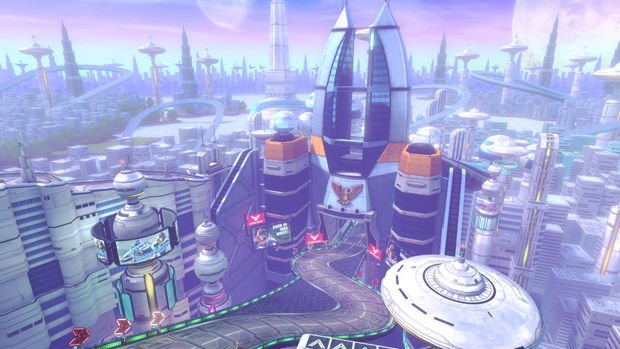 Fans of the anti-gravity gimmick should check out Dragon Driftway right away. Most of the course, which has a Chinese aesthetic, is upside down or sideways. The track itself follows the winding body of a dragon (who you might recognize as Gobblegut from Super Mario Galaxy 2).

And then there’s Mute City. You don’t have to be an F-Zero fan to love this fast-paced anti-grav track but you’re going to be especially pleased if you are. It’s full of boost pads and, in a nod to the source material, recharge strips (used here to earn coins). Just wait until that rocking theme song comes on. Mute City feels like an actual bustling city thanks to little details like billboards with Captain Falcon. Easily one of my favorite tracks, downloadable or otherwise.

The rest of DLC Pack 1 isn’t as consistently great as the core game, but it’s all relative. By industry standards for post-release content, Nintendo is killing it. This is a must-buy for Mario Kart 8 players, and I’m hopeful the company will continue pulling in other franchises going forward. These packs can’t just be a one-off experiment; the potential for cool crossovers is too high.