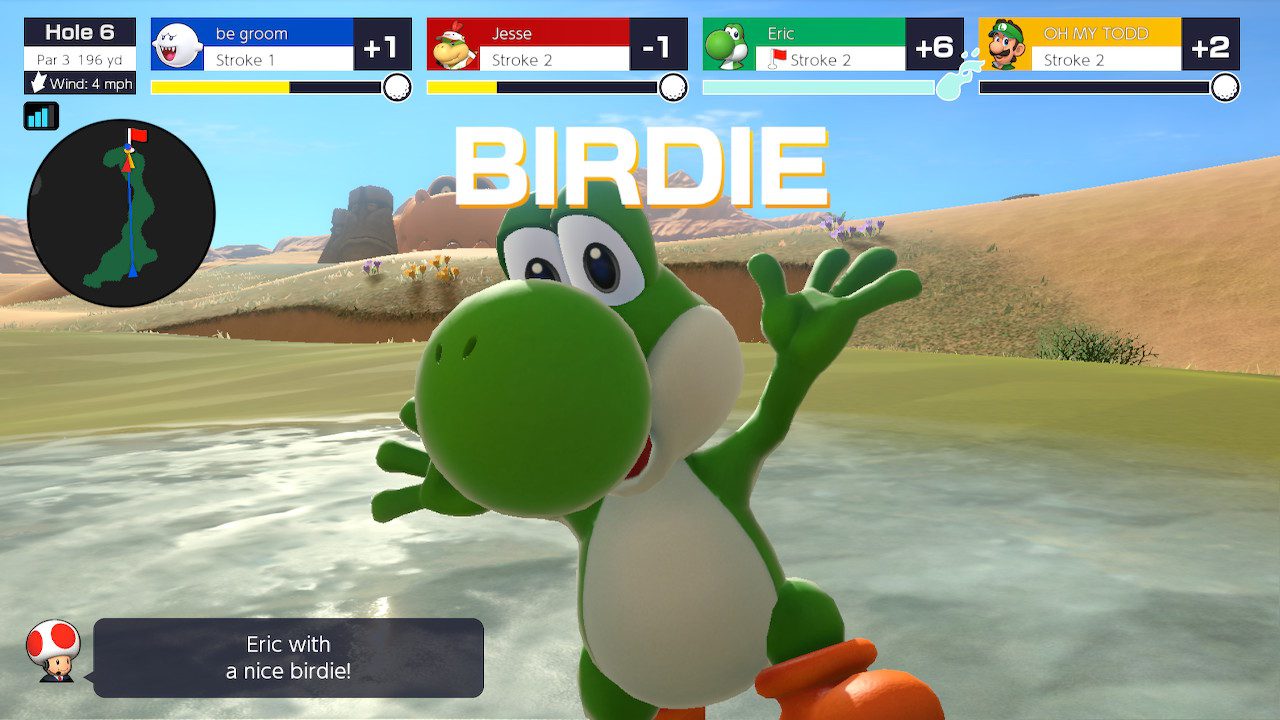 Mario might be known for his platforming abilities, but I’ve always been just as keen on his side ventures into sports. The various Mario sports spin-offs can have a way of turning athletics into spectacles, brimming with charm while still retaining the core of what makes these activities appealing. They are on the arcade side of things, not simulation.

When Mario Golf: Super Rush is at its best, it nails this. It can be goofy, fun, and a nice mix of classic golfing with some Super Shots and challenging course obstacles. But when it feels like it’s hitting the rough as often as it lands on the green, it gets harder to ignore the downsides.

Mario Golf: Super Rush provides a few different ways to smack tiny orbs across the links. Classic golf is pretty much exactly what you expect it to be: players take turns teeing off across a set number of holes, ranging from basic courses to more complex ones with different obstacles, layouts, and environments to overcome in search of the green. 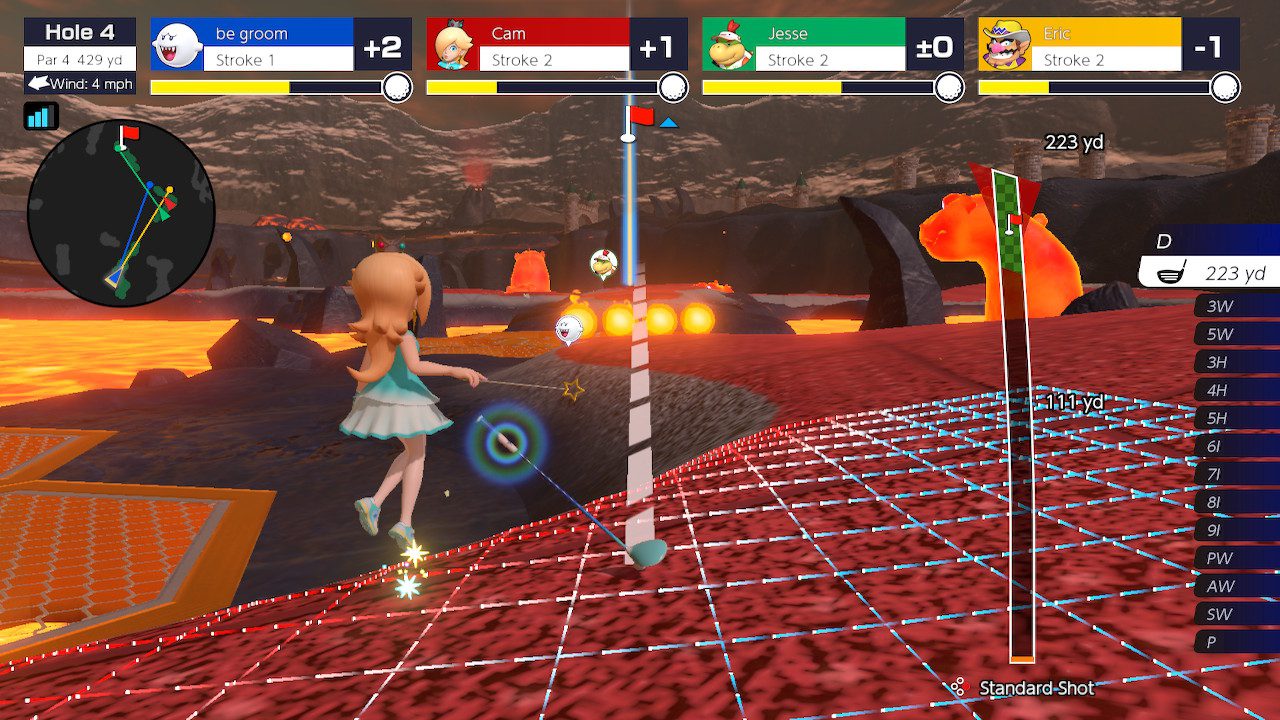 Golfing feels really good in Super Rush. It takes a while to really dial in certain aspects of it, and playing through the single-player campaign can help a lot in that respect. I’d also really recommend using a Pro Controller if possible, and especially the button controls over the motion controls. I’m glad that there are motion controls for some goofy antics, but they definitely feel more novel than anything.

Clubs feel distinct, adjusting shots for wind speed and the slope of the green feels great, and overall, I enjoyed my time whenever I was just chipping away across the courses. Each member of the Mario cast brings their own talents as well, and I really like the selection. Sure, you’ve got Mario, Bowser, Peach, and Luigi, but there’s also Charging Chuck and King Bob-omb. Those are good, solid cuts from Mario lore. I do wish they had a bit more character to them, as their celebrations (or bouts of depression from a triple bogey) are a little understated, but Super Shots seem to be where that went. Each golfer has their own, with effects ranging from laying down a sheet of ice or smokescreen to transforming other balls into eggs or stars. Golf is more fun when you’re not just sinking putts, but ruining your friends’ putts too, right?

Course selection in Mario Golf: Super Rush is a little slim—the lineup is expected to expand over time post-launch—and while there are some highlights, like a course resembling Bowser’s face, some of the courses feel a little more designed for Speed Golf. This version of golf is one of the new play modes, where instead of teleporting to your ball’s resting place and taking turns, every player runs around and has to chase after their shots, navigating the course and its hazards in the process.

I don’t know that I ever really gelled with Speed Golf. It’s not a bad addition, but it certainly has some ups and downs. In some cases, it’s fun to hold off on a shot until everyone is landing on the green, then smacking them all with a Super Shot and watching them scramble. Or you can Super Dash into someone else on the way to your shot, bumping them around in the scramble for the green. The urgency and chaos is appealing, and there are some neat obstacles to navigate in the process.

That said, Speed Golf can also feel very repetitive, especially due to how often it’s employed in the single-player campaign. Frequently, I felt myself falling into a cycle of hitting the ball and dashing to it, without really taking strategy or alternative options into account. It can also make a good shot feel extremely anticlimactic; in one instance, I teed off and was notified that I landed a hole-in-one, as I was still walking across the course, no replay or anything. 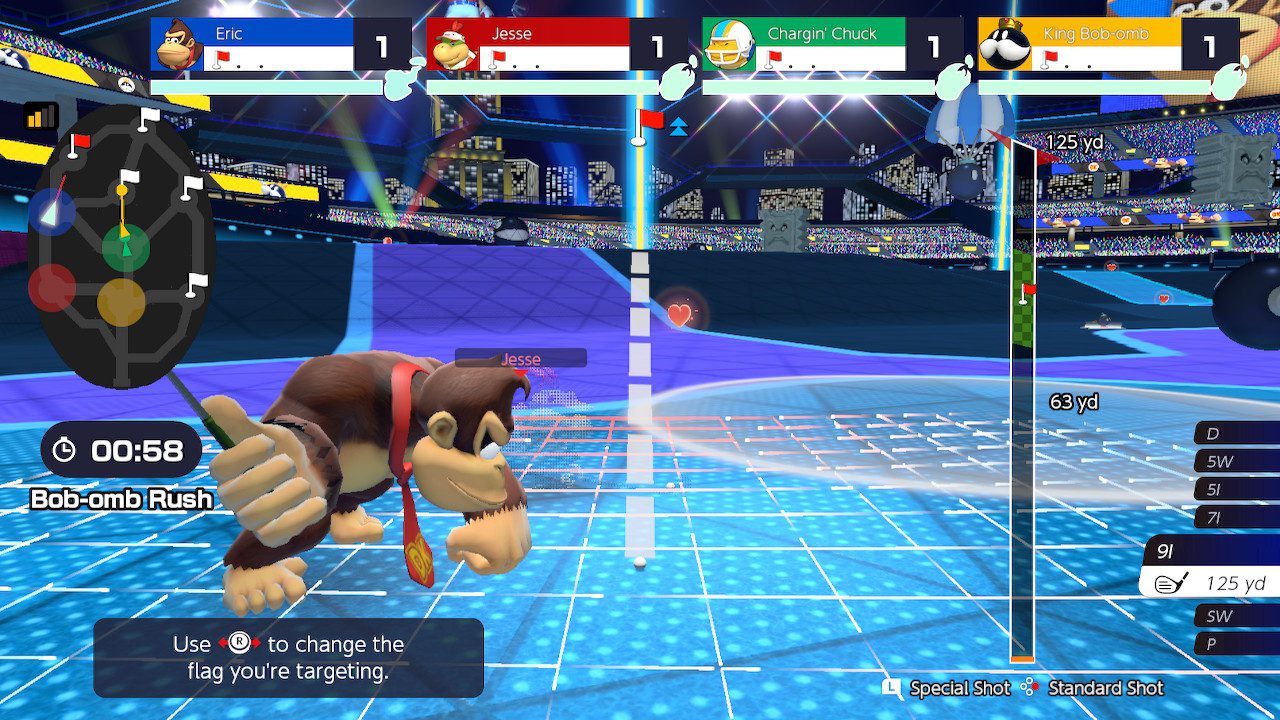 Battle Golf is a variation of Speed Golf, where everyone plays at the same time, only there are a bunch of flags, greens, and holes littered around a hazard-laden arena. You battle the other players to be the first to three holes sunk, so it’s as much about speed as it is precision. It’s a bit like the Mario Party of Mario Golf, and while it was fun the first few times, I didn’t have much desire to go back to it.

The Golf Adventure mode is the single-player campaign, something that’s likely to be of interest to folks who dug the Game Boy Mario Golf or, more recently, Golf Story. The single-player mode definitely takes after those, as a “golf RPG” that sees your Mii traveling between courses, competing with franchise favorites, and completing challenges that aren’t just hitting par or better.

While it has some good ideas and, in some areas, really fun twists on gameplay, it’s also short, not too in-depth, and rehashes some of its twists. Your Mii can grow in different areas over time, though by adventure’s end, you’ll probably be fairly maxed out in most respects, and have an arsenal of clubs with different effects, like added spin or making your shots more susceptible to wind. 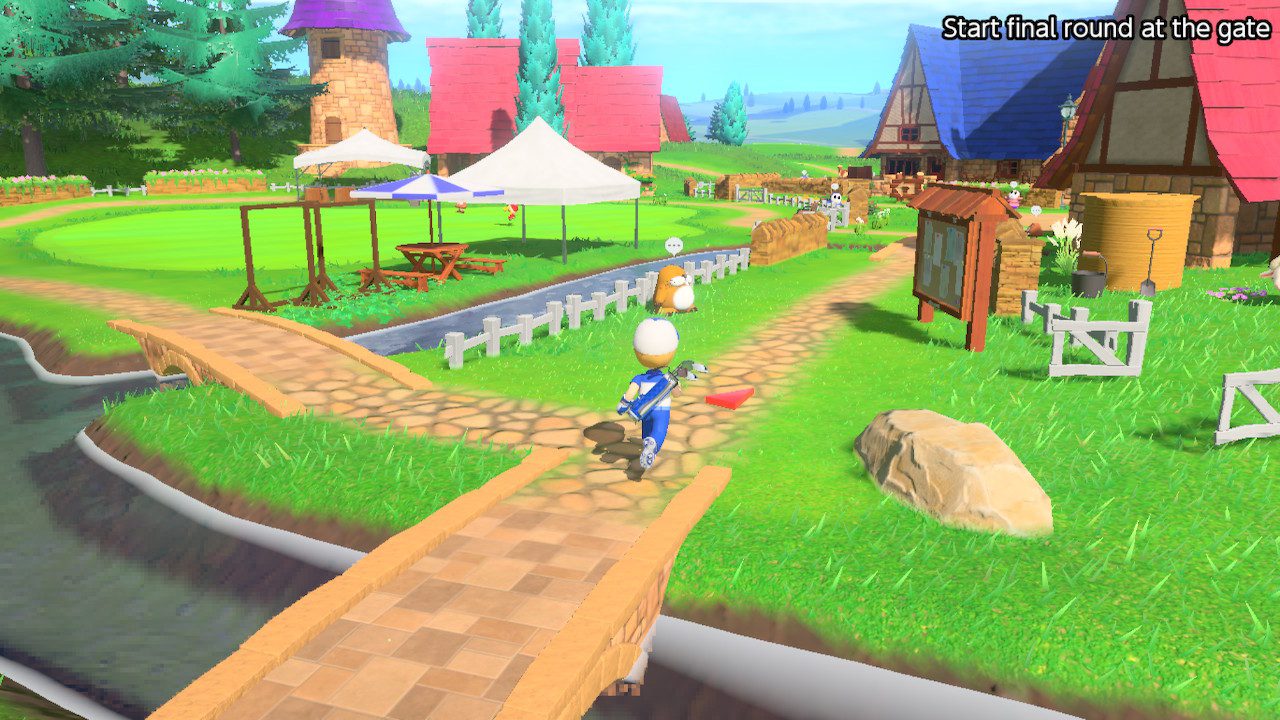 Some courses will have a timer, where you have a limited amount of time to make it to your ball and hit it again or you’ll fail out, or a set amount of time to complete a certain number of holes. The desert area introduces “thirst” as a concept, where if you take too long to golf, you’ll run out of water and fail. So, two variations on the same essential concept.

The challenges I enjoyed more were ones that got me to rethink how I play, or play in different ways. Batting my golf ball up and down cliff sides using tornadoes was an interesting hurdle to overcome, as was a series of courses where my team would fail if no one managed to hit par. They added a bit more tension and stakes, and forced me to use some of the more interesting clubs in my bag, without feeling like another ticking clock. There are some later-in-the-campaign twists that both add a little bit more zaniness to the story and some weird new mechanics, but ultimately it was the challenges of my golfing ability that stuck out the most. 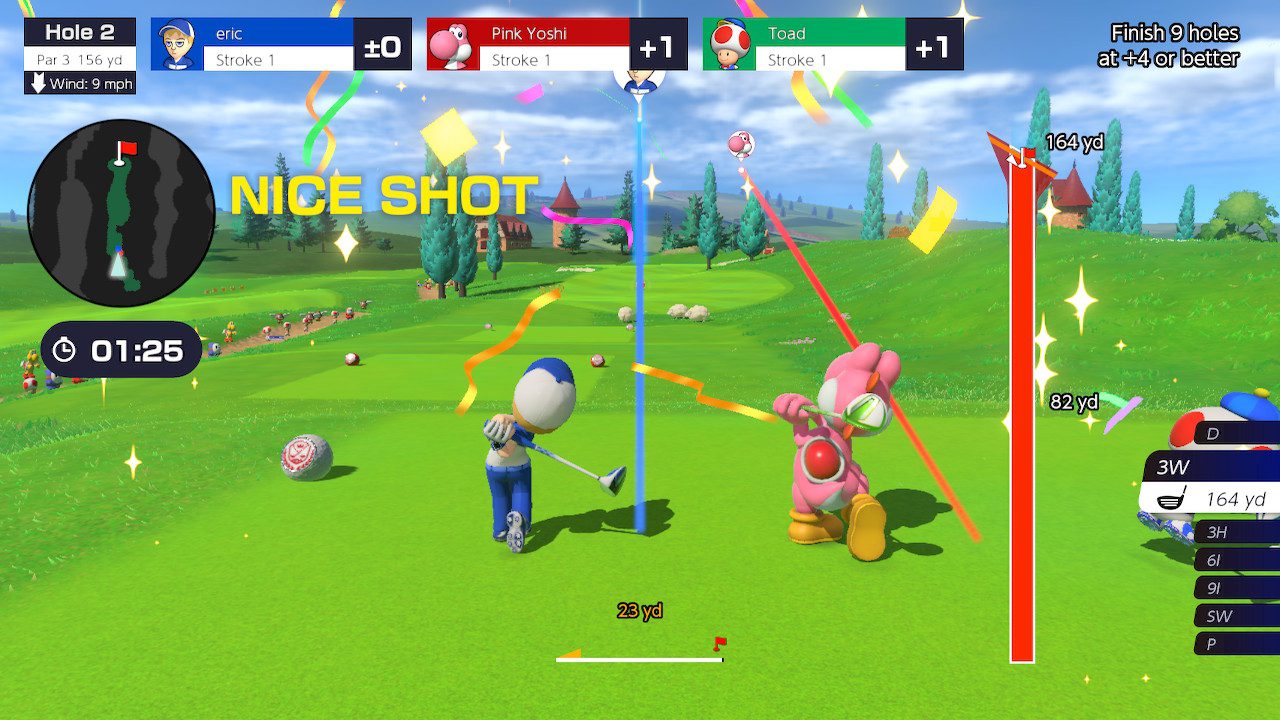 That was my takeaway from Mario Golf: Super Rush as a whole. Some parts of it were some really solid, fun golf, and other parts just felt like they missed the mark. It reminds me a lot of the previous Mario sports game on the Switch, Tennis Aces, where most of my fun was playing against friends in some good ol’ fashioned tennis bouts. As is, it’s a little slim, with single-player not taking up more than a handful of hours to see through, and really only the multiplayer to keep you going beyond that.

It also just needs a bit more Mario charm. Courses range from the sort of hazard-laden, gorgeous links you’d expect from a Mario sports game to underwhelming ventures with a few Mario cosmetics littered about the area. Celebrations are re-used and static. It’s missing some of that spark that makes Mario Kart and the older Mario sports games really pop.

Mario Golf: Super Rush is still a fairly solid golf experience, but it will need some of that aforementioned post-launch support to match up with previous sports spinoffs for me. It satisfies a craving for some arcade-style golf multiplayer, and I can see myself having some fun playing an 18-hole trek with friends online a few more times. I’m just hoping for some more reasons to keep me coming back.