I keep believing that I know what to think about March of the Eagles, Paradox’s not-quite-grand strategy Napoleonic war game, and then I go and do something mad like play it a bit more which inevitably causes me to question my previous assumption and lose many hours.

The game itself has a somewhat confused identity, and the likelihood is that the folk it was designed to appeal to won’t play it, and the people who should rightly love it may very well not know about its “hook.”

The hook I refer to is the glorious, hour-gobbling, back-stabbing multiplayer experience. The single-player could cease to exist and I’d barely notice its absence, which isn’t to say that it’s terrible, or even remotely bad, it’s just a bit boring after you’ve dined on a bounty of multiplayer wars. 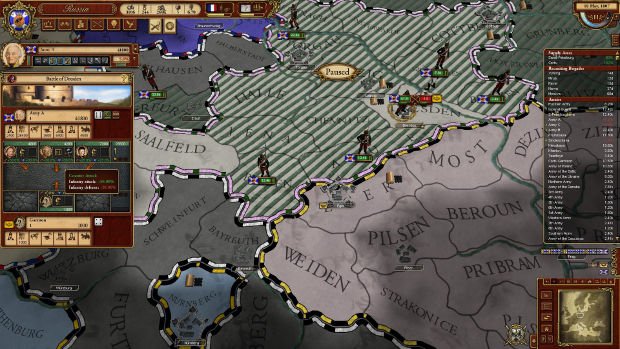 Paradox-developed titles aren’t exactly known for being welcoming. They are vast, complex grand-strategy affairs that, at first, can be exceptionally daunting. While the developer made great strides in explaining the complicated systems in last year’s Crusader Kings II, even going so far as to add a tutorial that was genuinely helpful (shocking, I know), the best way to get into these titles is still jumping in and simply experimenting. Failure is a great teacher.

With March of the Eagles, Paradox is trying something a wee bit different. Gone are complicated relationships, the web of deceit and political intrigue, vast trade networks, and a period that covers decades or centuries. In fact, March of the Eagles isn’t even a grand strategy title; it’s a war game.

Set during the turmoil of the Napoleonic Wars, players can take control of one of the major powers such as France or Britain, or a minor nation like Bavaria, and duke it out across Europe and the Middle East in an attempt to gain victory over the other powers. Yes, victory. Another major difference between March of the Eagles and Paradox’s other games is that your goal is to actually win, rather than just play as a nation and get to the “end.”

The focus is exclusively on warfare, and though there’s a spot of economic management and building, everything ties into constructing massive armies and fleets, and marching them across the rather lovely map. To win, a nation must have complete land and sea dominance, and this is gained through conquering specific provinces. 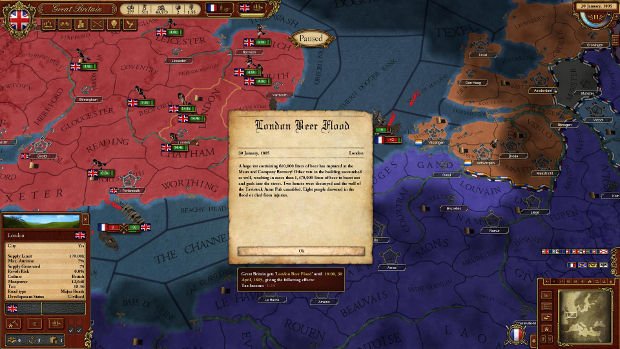 Only the major powers can actually do this, while the minor nations are left with only one real option: join a coalition and help the lead nation secure a victory. It doesn’t make playing as these somewhat insignificant countries all that interesting, which is something of a shame, as I’m always fond of playing the underdog.

For the life of me, I couldn’t get properly invested in the single-player experience. The AI is spotty at best, diplomacy is threadbare and always seems like a duller option — especially when dealing with small powers, where just conquering them is a lot more fun than trying to be their chum — and in the end it just feels like I’m not doing much beyond building armies and sending them into foreign territory.

The scraps themselves are actually rather good, however, and while battles are still hands-off affairs, there’s a lot more indirect control compared to, say, Europa Universalis. Armies can be assigned generals, one to lead, two for the flanks, one for the center, and a final general for support, and each of these grand sideburn-toting chaps has a certain expertise and skill level, making these choices at least a bit meaningful.

Several tactics can also be employed: some that every nation has access to, and some that can be unlocked through ideas, bought with points earned through fighting. On top of providing new tactics, ideas can confer bonuses to a nation’s economy, unit defense, rate of fire, the speed of ships, and all manner of other rather helpful things. 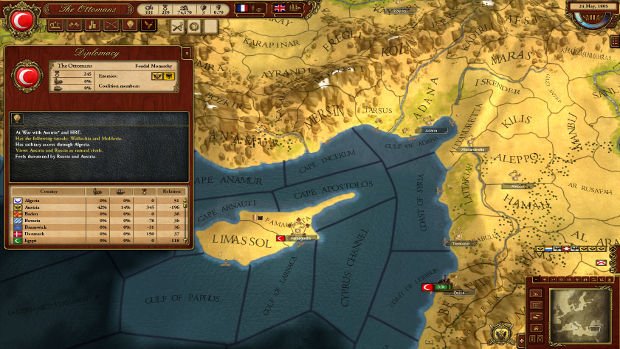 Idea points are gathered in a rather novel way, as well. France, the big kahuna, starts off with rather a lot of ideas, being more advanced than most nations when it comes to military matters, but through losses, the other nations can catch up. With each failure they learn more, inspiring even the most cowardly players (like my fine self) to jump into wars with wild abandon.

Playing through the campaign, I couldn’t shake the idea that March of the Eagles was aiming for a demographic that I wasn’t really a part of — which isn’t really a bad thing at all. With its goals, clear victory objectives, tight time frame, and obsession with war, it seemed to be designed to get new players interested in Paradox titles. In many ways, it does a good job. It’s certainly easier to get into, and a damn sight simpler than any of their previous strategy offerings, but some odd choices hold it back from being something I would recommend to new players over my regular advise of “just player Crusader Kings II and stop caring if you mess up.”

Firstly there’s the balance issues. It’s a historical war game, so, strictly speaking, it shouldn’t be all that balanced. France was more powerful than Spain; Sweden should get its ass kicked if it goes head to head with Russia. In a game about winning, however, that’s a hard pill to swallow. Then there’s the over-complication of units. It gets a bit silly. There is a ridiculous number of historical troops that can be recruited, all with their own statistics, cost, and specialties, and most of them are completely unnecessary. I stick to a very small pool, ignoring the rest, but it would be all too easy to get all in a muddle.

Yet despite these issues, I’ve been staying up till 6:00am playing the damn game. Why? The multiplayer is something really special. When each major power has a human player behind them, the issues with the AI, diplomacy, and the serious lack of intrigue vanish. Suddenly it becomes a tense game filled with shaky alliances of convenience, betrayals around every corner, and lots of nasty surprises. 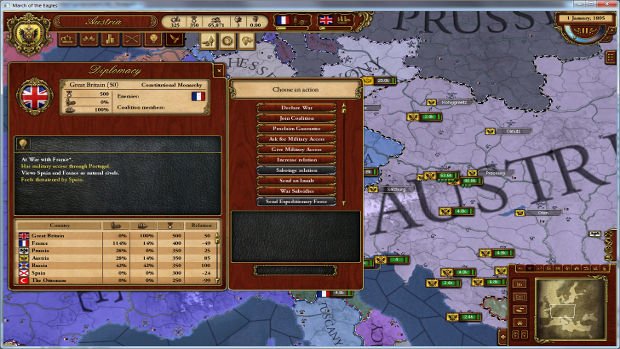 In my current multiplayer match, I’ve been playing as Spain (again), and I’ve essentially been France’s lapdog. France starts a war with someone, I start one with them too. France needs more troops on the Prussian border, I send my Spanish forces up north. I have plans though, oh yes I do.

Unfortunately, these plans keep being cut short but The Ottomans, of all powers. We clashed over our separate conquests of North Africa, then Sicily, and now they are close to winning the game, to the surprise of almost all the other players. Yet, because of all the rivalries that have developed, nobody had the time to actually fight them.

Even more surprising things can come from a multiplayer match. In the same game, France and Britain made peace, ending their respective coalitions against each other. This dissolved some pretty serious alliances, but as I was still at war with Britain separately, we remained at each other’s throats. I’d conquered and held onto Gibraltar throughout most of the game, so I sent a peace offer to Britain, looking to end the war while keeping the infamous fortress.

My offers went ignored (the swines!), so I responded by sending a huge army into Ireland, and held the whole country hostage until Britain gave in. There was some desperate bargaining, a whole bunch of lying, and none of it would have really worked in the single-player mode. I went from not feeling like I had enough to do in single-player, to making secret alliances, baiting enemies, planning sneak attacks with allies, and wheeling and dealing like a used car salesman. 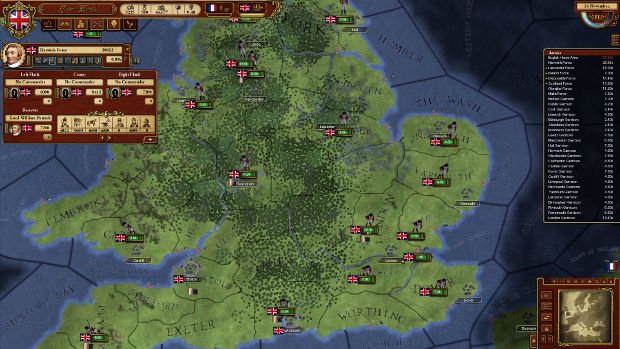 The absence of some of the more attention-demanding aspects of Paradox’s grand strategy titles frees up March of the Eagles to offer a multiplayer that is built on meaningful interaction and rivalry, and doesn’t require the sort of manic juggling one finds in its larger counterparts.

There still remains some obstacles to an enjoyable evening of name-calling and war-declaring, unfortunately. Throughout my multiplayer matches, there’s been players dropping, a shoddy “metaserver” that simply didn’t work, the need to connect directly via IP as if we were still in the ’90s, and the weirdest issue so far: the checksum of half the players changing, stopping us from being able to play together for about 30 minutes. Get past that nonsense and it’s bloody marvelous. If you have the patience.

I’d happily recommend March of the Eagles based exclusively on the multiplayer, but if you prefer your gaming to be a solo venture, then it might not really offer quite as much. Those looking to get stuck into a historical war and not a lot else may still find conquering Europe and giving ol’ Bonaparte what for entertaining, though, and as a game doesn’t tend to go on for longer than eight hours in single-player, it won’t devour your life.