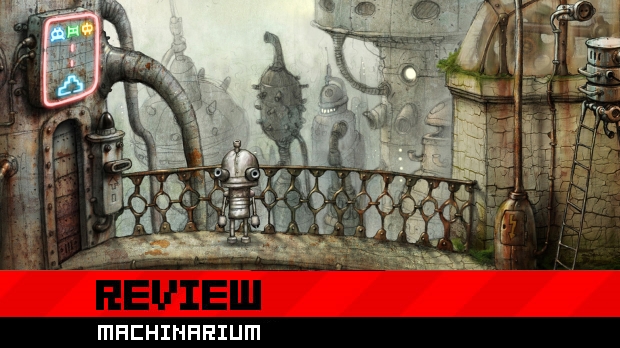 Machinarium may be the best adventure game I’ve ever played.

I don’t know if I prefer it outright over the motion-controlled glory that is Zack and Wiki, or the wacky time-travel-laffs of Chariots of the Dogs, but I do know that if you’re even remotely interested in adventure or puzzle games, you’d be a complete fool not to check out Machinarium.

I know I was pretty harsh on the game in our preview a few months ago, but thanks to a new hint system and a few more hours of playtime, I can confidently type the three boldface words that adorn the header of every review I write for a great adventure game that I fear might not sell enough copies to support its developers:

Hit the jump if you wanna know why.

Machinarium, more so than most adventure games I’ve played, understands its own genre enough to ignore its conventions. It understands that most adventure games, even the “classics,” just aren’t that good. I love Monkey Island and Sam and Max Hit the Road to death and consider the adventure genre one of my favorites, but I can’t pretend that the dialogue and noninteractive story sequences, however funny, can often feel boring and uninvolving; that the endless backtrack-heavy inventory puzzles spread across dozens of different locations are confusing and not particularly rewarding to solve; that pixel hunting is an absolute pain in the ass and should be avoided at all costs.

Machinarium avoids every single one of these problems while still, somehow, feeling like an adventure game down to its very (rusty, metal) bones. Except for the pixel hunting thing.

A review like this would typically devote an early paragraph to summarizing the story, but I’m pleased to be unable to do so with Machinarium: the story is not only completely bare-bones and highly reliant on player inference (think Shadow of the Colossus), but it’s told in such a gradual and mostly unobtrusive way that half the fun comes from gradually discovering exactly what the unnamed protagonist’s relationship is to the rest of the world (I say mostly; from time to time the protagonist will have a thought bubble flashback to provide backstory, but these are really short and easily skippable). Suffice to say, the world of Machinarium is beautiful, haunting, charming and funny.

Additionally, the entire game is completely devoid of human language. No lengthy, conversation-filled cut scenes, no too-lengthy dialogue trees to irritatedly click through — in fact, no written words whatsoever (the drop-down menu notwithstanding). I mention this partially because it really helps the feeling of immersive otherworldliness that permeates every moment of gameplay, and partially just because it’s really goddamn cool.

In regards to puzzle solving, Machinarium is as satisfyingly focused a title I’ve yet experienced. Rather than forcing the player to collect dozens of items, or backtrack across eight different screens just to accomplish one small task, Machinarium restricts 90% of its puzzles to single locations; even when the game world opens up around the halfway mark, the individual puzzles still feel remarkably tight.

You may enter a room with the intent of finding an item to be used in a different area, but you’ll still be able to essentially solve all the puzzles in a location without leaving to get another inventory item or talk to another character. Those few areas you cannot access immediately are clearly marked, and feel less like distracting maybe-solutions for other puzzles and more like isolated reminders: “yes,” the game says, “go to the greenhouse and solve an abstract lite-brite-esque puzzle, but don’t forget you’re also looking for a key to the arcade. Thus, it’s very difficult (but not impossible — more on that in a bit) to feel completely confused about where you need to go, what you need to do, and what tools you have at your disposal to accomplish those aims.

Even the player’s movement within a location has been streamlined. Rather than allowing you to just click anywhere in the world and move there, your movement is restricted to specific hot spots. While I was initially frustrated that the game forced me to move only to predetermined points (again, if you read our preview, “frustrated” may be an understatement), I eventually understood why the folks at Amanita did it: every single hot spot includes something important that can be interacted with.  If you can stand somewhere, it’s because there’s something that needs to be done at that specific point in space; a lever to be pulled, a logic puzzle to be solved.

Yes, logic puzzles are as ubiquitous in the world of Machinarium as they are in Professor Layton, except they’re much more elegantly integrated here; every door lock or power grid you’ll come into contact with is a self-contained conundrum to solve. When I say “logic puzzles,” though, I’m not speaking of the I haff tvelve metchsteek variety; we’re talking balls-to-the-wall, abstract, rotate-these-three-dotted-rings-so-that-the-green-dots-are-all-resting-in-the-center, draw-this-weird-shape-without-drawing-the-same-line-twice puzzle puzzles. Though these sorts of brain teasers make up the majority of the gameplay, Machinarium is nonetheless as varied an adventure game I’ve yet experienced. It takes those logic puzzles and breaks them up with LucasArts-esque inventory puzzles, Myst-ian environmental manipulation, and a couple of surprising, if uninspired, arcade-style minigames.

On the whole, I found the puzzles remarkably enjoyable. As someone who typically sucks at logic problems and the like, I was surprised to find that more often than not, Machinarium‘s puzzles hit that adventure gaming sweet spot of being just difficult enough to get me thinking, but not so frustrating that I went scrambling for a walkthrough.

Most of the time, anyway. Thankfully, Machinarium includes a remarkably cool walkthrough feature. If you just need a general tip as to what to do next, you can get a free hint (presented via a charmingly animated thought bubble popping out of the protagonist’s head).

Should you need more assistance, your protagonist — for reasons never explained — always has a locked book in his inventory. You can open this book by playing an intentionally boring LCD shmup on the book’s cover. Should you have the skill, and more importantly, the patience to complete it, the book will open and reveal a walkthrough of the entire room you’re in, conveyed via an ink-and-pencil comic strip. I don’t think I’ve ever seen a walkthrough implemented in such a remarkably clever way. Whenever you get stuck, you’re forced to make a simple choice: do I want to waste time playing the not-fun game to open the spoilery book, or do I just wanna try harder? No matter what your choice, you still haven’t alt+tabbed to GameFAQs; you’re still in the game, immersed in its wonderful atmosphere. And even if you do open the walkthrough book, its integration with the game as a whole makes it feel less like you’re a cheating little bitch and more like you’re just using the tools afforded to you.

That said, I couldn’t help but still get frustrated from time to time. The thought-bubble hint system is often too vague, or too specific; it either tells the player something they already know, or spoils an entire puzzle. When your only hint options range from getting potentially no help whatsoever to getting a complete spoiler, either via an overenthusiastic thought bubble hint or the locked walkthrough book, it can be hard to feel confident about your abilities as a puzzle solver. You’re either stuck and helpless, or the game essentially calls you stupid by solving the puzzle for you.

Additionally, many of the items you’ll need to grab from the environment are simply too hard to see at first glance. Perhaps this is just the old red-green colorblindness talking, but I spent something near an hour searching a location for a dark-colored plunger, only to find it’d been stuck to the dark-colored ceiling of a dark-colored room I’d escaped from earlier in the game. I’ve got nothing against asking the player to look really closely to the beautiful environments you’ve drawn by hand, but hell if I didn’t feel the exact same pixel-hunting frustration that defined my first playthrough of Day of the Tentacle.

These aren’t entirely inconsiderable faults, but they should in no way dissuade you from playing a game as atmospheric, focused, and altogether clever as Machinarium. If you were interested enough in the adventure genre to hit the jump and read this review, then don’t worry — some hiccups notwithstanding, Machinarium is just plain one of the best adventure games ever made.

Go get it already.