Machinarium is a game I’ve somehow managed to play through numerous times. I gave it a shot after it was free on PlayStation Plus and then grabbed it in a Humble Bundle before acquiring the PS4 copy last year. Somehow, it has become my comfort food for when I’m down and need something familiar and charming to play.

Much to my surprise, I’m now reviewing Machinarium years after its debut because of its new PC update (available today), which developer Amanita Design has dubbed the “Definitive Edition.” Seeing as how I’ve almost committed the game to memory, I think I have a good understanding of why this title is so enjoyable and how this new PC version really does feel like the best way to enjoy it. 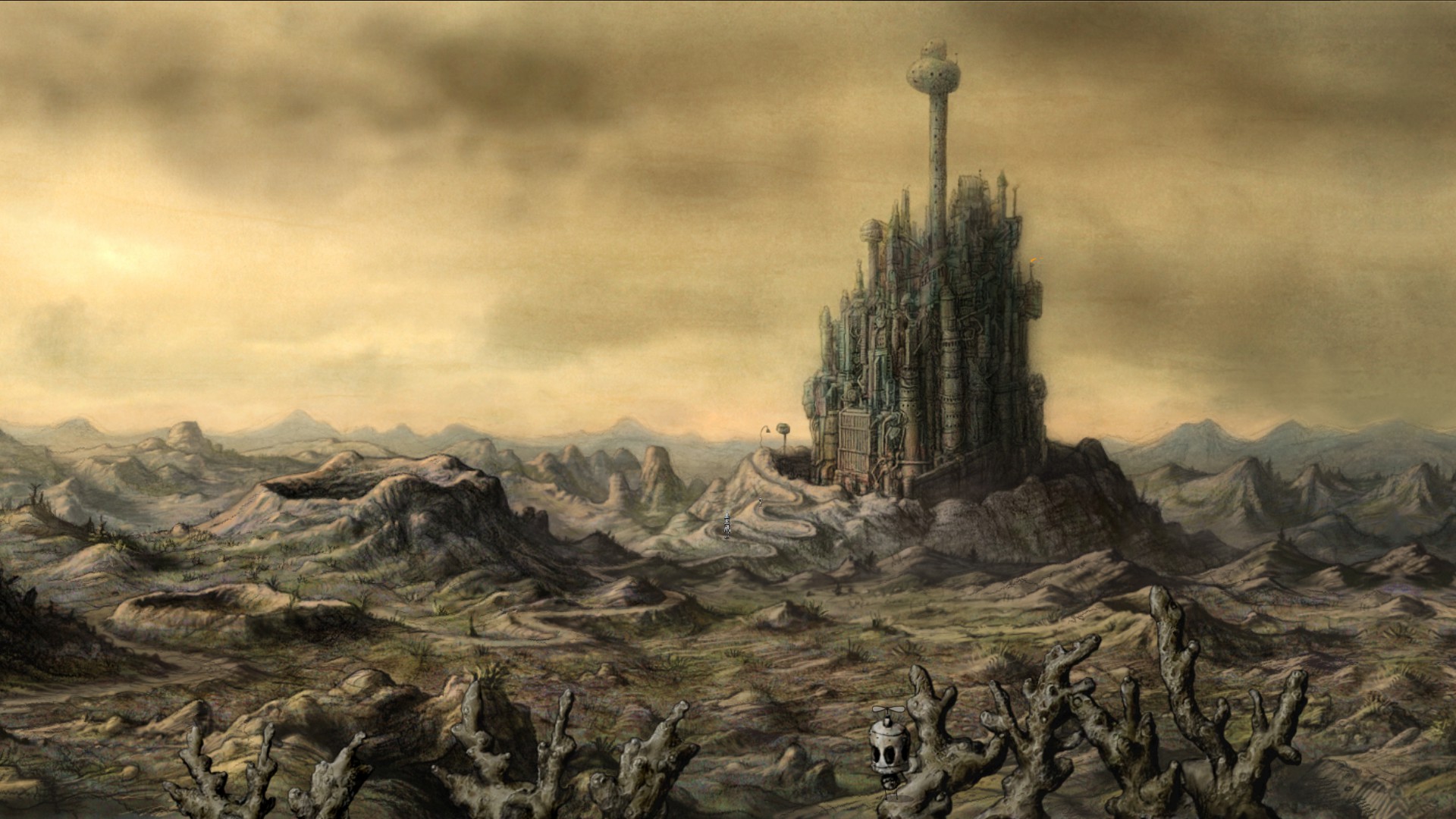 Machinarium is a hyper stylized point and click adventure game. If you have any familiarity with genre classics like The Secret of Monkey Island and Day of the Tentacle or even recent Telltale efforts like Back to the Future, you should have a basic understanding of how the gameplay works. You’ll be thrust into mini puzzles that occupy a single screen and task you with trying to figure out obtuse logic to combine items and move on to the next scenario.

The story sees you controlling a small robot, named Josef, who is trying to free his girlfriend from the clutches of some nefarious robots inside of the Machinarium. All of this is presented without spoken dialog, mostly through cartoon bubbles that illustrate past events. It’s very cute and always amusing, even when bad things are happening.

Machinarium doesn’t reinvent the genre more so than just present a different angle on it. When I first played the game, I had no idea what to expect from the title (which sounds like a horror game). After I caught a glimpse of the opening scene, though, I was hooked. The presentation of Machinarium is just plain gorgeous. Everything about this art style evokes care, effort and charm. This game looks like a painting come to life.

That would only get you so far if the gameplay wasn’t enjoyable, but that isn’t a problem. Even if it followed a tried and true formula, it manages to inject its own sense of style into the puzzles that make them feel logical, instead of just plain weird. While solutions to puzzles may not be readily noticeable, you’re never asked to combine two random items or click on literally everything to figure out how to progress.

A prime example of this would be one of the earlier puzzles, in which you need to guide your character into the titular compound. If you’re observant, you’ll notice that all of the guards have cone shaped heads that are painted a light blue with a light bulb on top. Surveying the immediate area, you’ll see a stack of cones, a light bulb on a lamp post and a bucket of white paint. Move some of those cones aside and you’ll find blue paint underneath, which you can mix with the white paint to give you the proper color. Then it’s just figuring out how to grab the light bulb and you’re set to enter.

If you do manage to get stumped, there’s a hint system for every screen. While you’re only given a single hint, most puzzles aren’t so complex as to require you to traverse multiple screens. Thankfully, Machinarium doesn’t shy away from that, but that never makes up the majority of what you’ll be doing. Puzzles are typically self-contained roadblocks that hinder immediate progress. 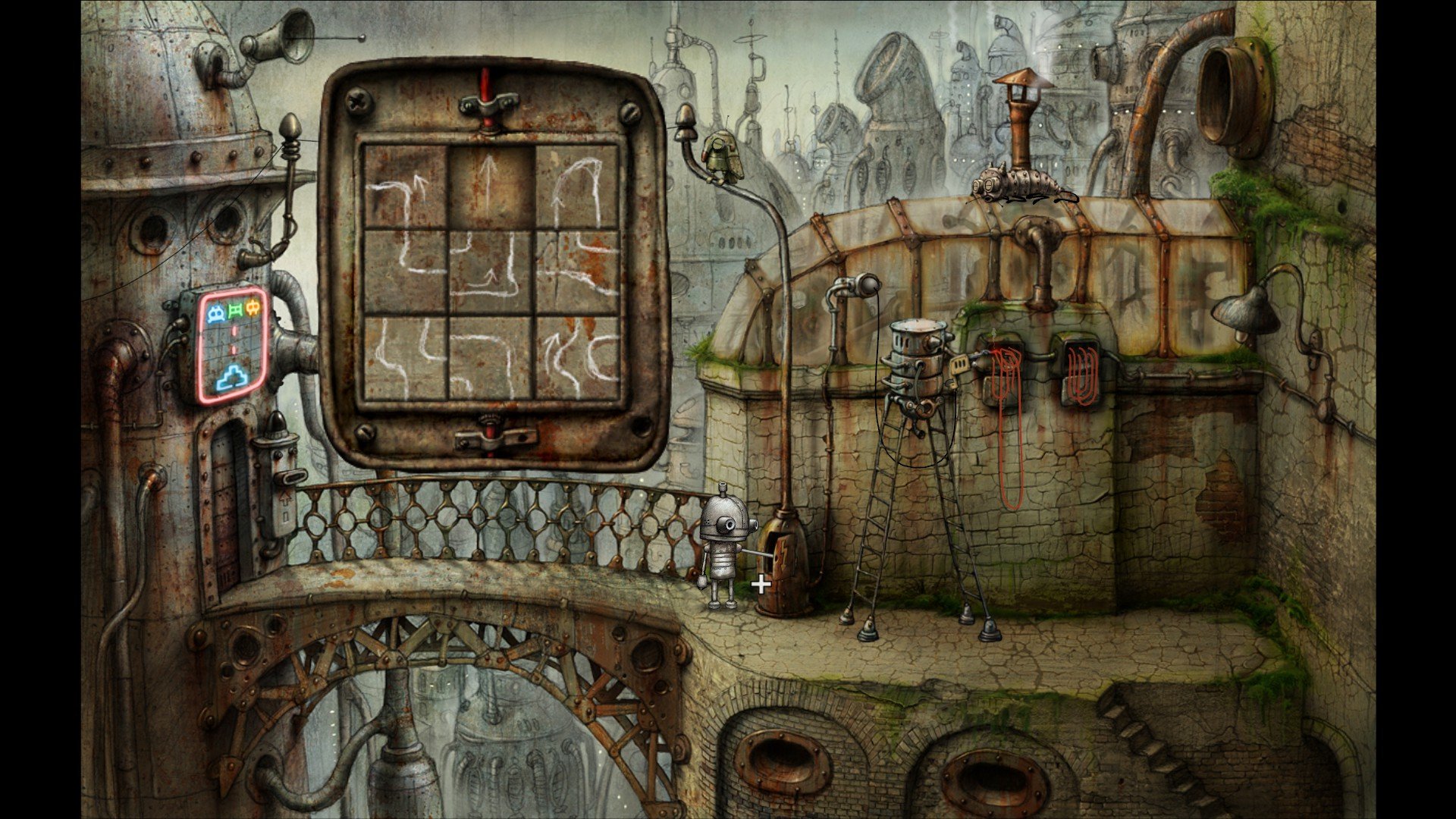 Of the few that do ask you to travel a little, they usually involve helping some of the citizens of Machinarium. This lets the artists illustrate emotions by way of a guard who is sad over his toy bear being broken or a jazz band looking to play their instruments. You’ll witness the art and sound design come together to evoke a sense of compassion for these characters, due to either their depressed demeanor or their sad grunts. Fixing their problems feels highly rewarding, even if they aren’t real beings.

I can’t neglect that the game actually does contain an entire walkthrough of itself within. If you really get stumped and just cannot figure anything out, you’ll have access to a locked book in your inventory that will explain the entirety of your current screen. Unlocking the book requires you to pass a sort of Space Invaders-esque minigame, just that it is incredibly boring. I guess you have to be punished a little for giving up so easily.

Really, though, you shouldn’t find yourself that lost within the world of Machinarium. While the original PC version has issues displaying in fullscreen, this new port utilizes DirectX and more resembles the various console versions in terms of quality. The game now properly displays on higher resolution monitors (up to 4K resolution), has a zoom function, cloud saves, a plethora of various language options (including Chinese, Russian, Korean and Japanese), Steam achievements and even supports gamepads (if you’re into that sort of thing). 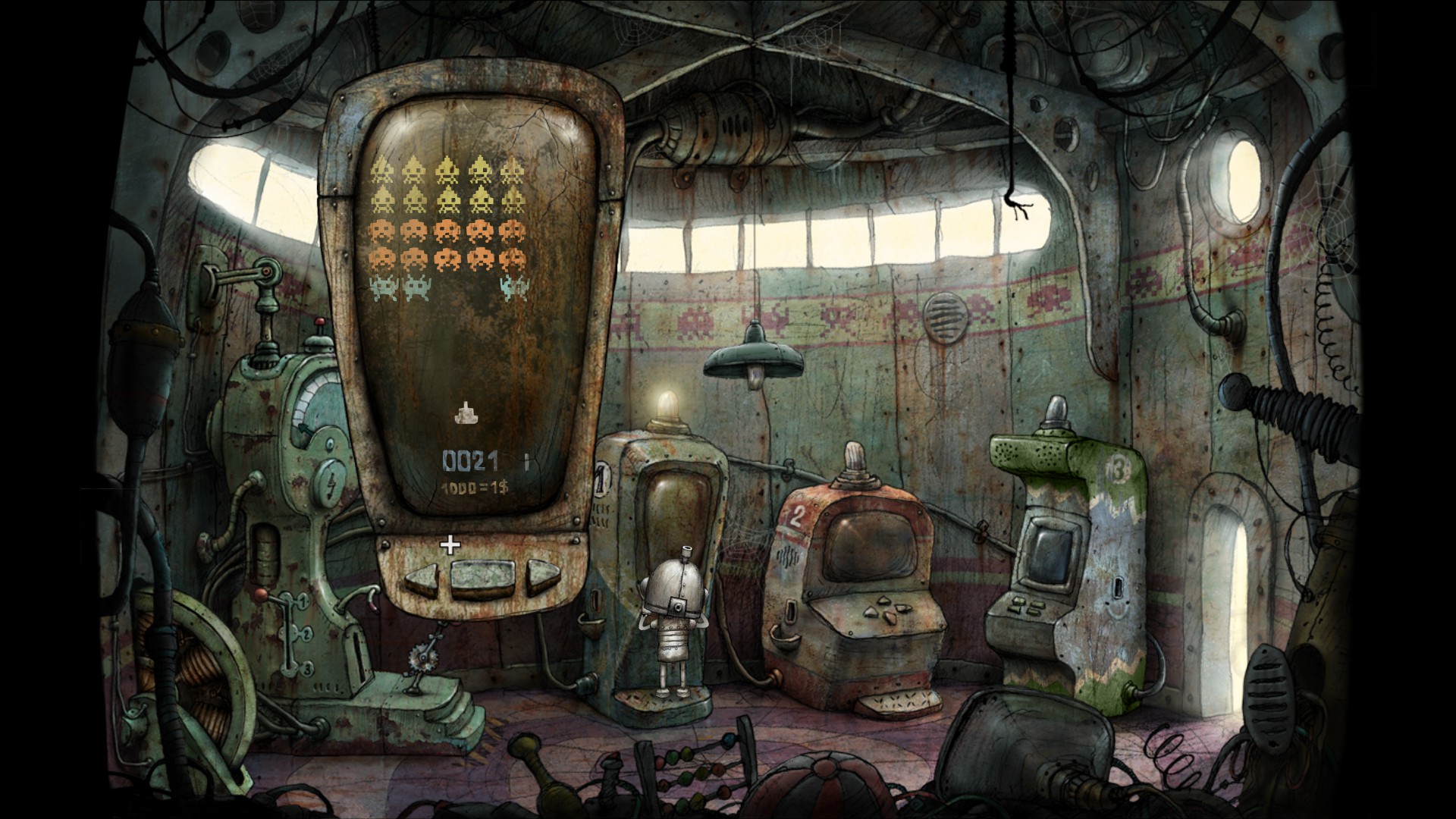 I don’t prefer to use one for Machinarium, but any Xbox 360 and Xbox One gamepads will work natively. Steam has support for DualShock 4, so that is also ready to go out of the box. If you have a different XInput pad, that should work without much fuss. Honestly, though, I feel like the mouse is the best route, seeing as how this game was created in the vein of old-school adventure titles.

What is a bit odd are the few minigames you’ll encounter. While Space Invaders can be controlled with the keyboard, the very final minigame puzzle only supports mouse and it feels plain weird. You’ll move your character as if your mouse is a joystick and trying to drag the cursor to one side of the screen is sluggish. It doesn’t ruin the game, but it’s certainly not ideal.

I also had a few issues with clicking on where I wanted my character to go. Machinarium has predetermined spots where you can stand, so you’ll sometimes click near a door to interact with an object only to have Josef walk into the next room. I kind of want to kick him when that happens, but there is only a single puzzle in the game that is time sensitive, so it never becomes a major problem.

Even with small issues like that, Machinarium remains fun and engaging throughout its entire runtime.  If you haven’t taken the plunge now would be a great time to do so. The updated PC version is free for previous owners, but any new comers can pick it up and be introduced immediately to those changes.  What more could you ask for, honestly?

[This review is based on a retail build of the game purchased by the reviewer, which updated into the Definitive Edition. The base game is on sale for a limited time on Steam.]