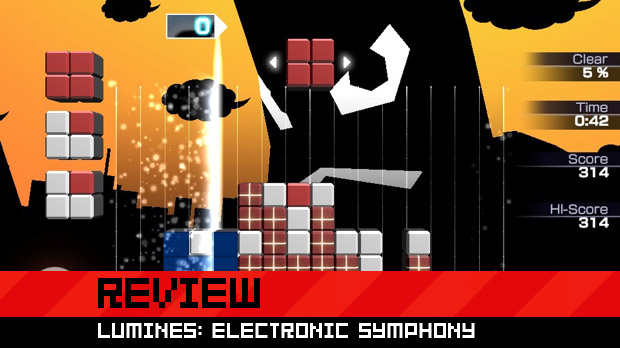 If Lumines was your drug on the PSP, know that it’s been refined and made stronger. This is the hard sh*t, folks. You’re in danger of totally crashing and burning with Lumines: Electronic Symphony on the Vita. This is the worst for those who barely managed to shake their addiction, as you’re never getting off this stuff.

Side effects include dry mouth, red eyes, shooting pains in the arms, hallucinations, and spontaneous compulsions. 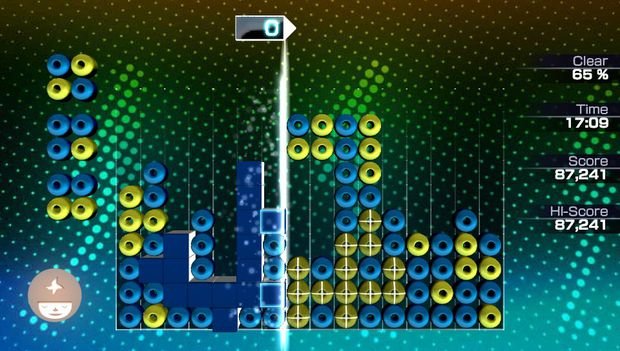 Lumines‘ rhythmically timed block-dropping puzzle formula was already so close to perfect, not much was needed for a follow-up. We just wanted more, that’s all. Finally, after half a decade, Q Entertainment hits us with more of the good stuff in Lumines: Electronic Symphony on the PS Vita, and while it looks fancier and sounds better than ever, that same super-addictive action is still at its core. It’s as good as ever, and in some strange new ways, better than ever. My hands are numb from playing so much. I’ll continue writing a review beyond this because that’s what I’m paid to do, but we can just call it right now: this needs to be at the top of your Vita launch list.

If you’re new to the franchise, Lumines has you dropping a cluster of four blocks made up any combination of two colors. Your job is to drop these blocks to create a square or rectangle comprised of blocks of the same color, which will clear them from the board and add to your score. The dropping of these blocks must be timed to fall within a measure of the backround song, as a “clear bar” scans the play field, passing by every four beats. It’s a very simple formula, and that’s what makes it so easy to pick up and hard to put down.

Of course, the other half of the Lumines magic is great music to play to, and the strange, hypnotic visuals that accompany these songs. There’s more than 30 toe-tappers this time around, and there’s not a dud in the bunch. Aphex Twin, Amon Tobin, and The Chemical Brothers are just some of the top acts that keep Electronic Symphony hopping. 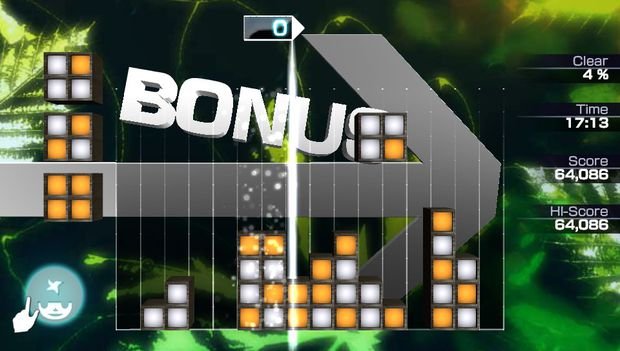 Lumines: Electronic Symphony doesn’t change much of the basic gameplay, but they’ve worked around it with some new upgrades and abilities. The avatar you pick isn’t just a goofy picture anymore as it adds special abilities to your game. You’ll fill up a meter through normal play, and when it’s full you’ll be able to tap your avatar to use its special ability. These are small perks that make your life a bit easier, like the ability to increase the wait time for your next blocks, or the ability to change your next block into a bonus block. You can even change the color of the blocks or stop the timeline with earned avatar abilities. It’s a small tweak to the basic Lumines formula, but experienced players will tell you that even a small tip of the scales in your favor makes a big difference in the long run.

Another change for Electronic Symphony is the new shuffle block, which randomly changes the color of each block in the play space. While that may sound like the worst thing ever to happen to Lumines, you’ll be thanking your lucky stars when you can drop one in a huge pile of unmatched blocks. It almost always helps by clearing some of your mess, letting you play longer without “topping out.” The shuffle block has saved my ass so many times that it is easily my favorite addition to the old formula. Trust me, you’ll be just as happy to see it as you used to see the chain block come up in your queue. 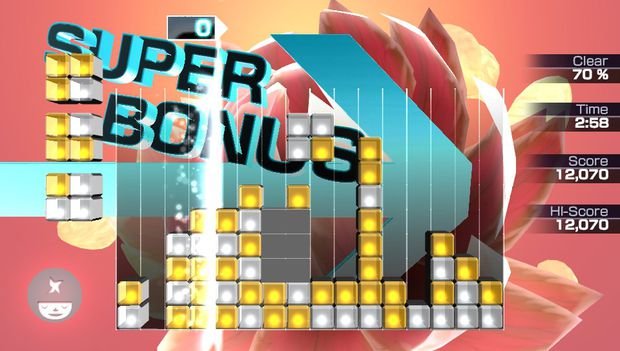 A new experience system rewards you for all those hours you’ll sink into the game. Logged in, your profile will track your games, keep your stats, and give you experience points in all of the modes, letting you unlock avatars and other bonuses with what you’ve earned. Your level and stats are also shared with your friends, and the game’s interface makes it really easy to see where you stand among them with post-game reports and worldwide leaderboards. I’ve already lost a good chunk of my work week trying to stay on top of the leaderboards, and I’m betting that this high level of connectivity is going to make Electronic Symphony one of the most popular online launch titles for Vita.

Speaking of socially connected features, this game’s World Block mode is pretty nifty. Each day, every connected Lumines player’s cleared blocks go toward erasing a huge “world block,” which is made up of two million smaller blocks that reset every 24 hours. You can check your contributions each day to see how much you’ve helped. It will be neat to see what happens when the world block is cleared.

Of all the game modes, Electronic Symphony‘s Voyage mode will probably suck up most of your free time. This is the main attraction, where you’ll continue playing until you fill up the play space with unmatched blocks or give up. As it stands now, to top the current leaderboards, you’d have to play in Voyage mode for a couple of hours straight. If you suck, this is time you will never get back. I’ve always loved Lumines‘ time attack modes, and they return in this game as Stopwatch matches. There’s also a multiplayer Duel mode, a challenge-based Master mode, and the returning Playlist mode, all of which are like crack in their own way. 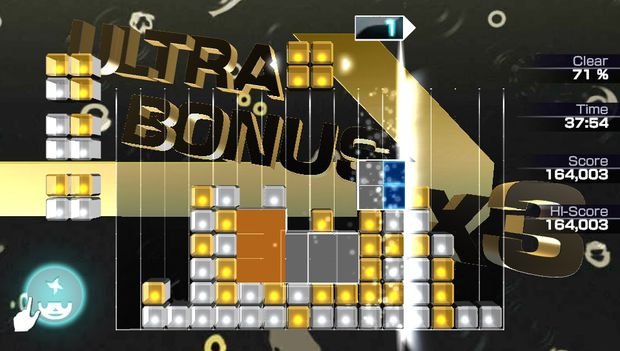 There are only a few small scuffs on an otherwise flawless surface. Being a Vita game, touch controls are available, with swipes sliding and dropping blocks. They work well enough when the action is relatively calm, but when things pick up a bit, they simply do not cut the mustard. The load times aren’t terrible, but they are just long enough for you to notice them and wonder why they’re there.

The way I see it, everyone already loves Lumines, so this review serves no one, especially when you consider that Electronic Symphony is the best one yet with its gorgeous high-resolution visuals, rocking soundtrack, new gameplay mechanics, and awesome connectivity features. No Vita should be sold without a copy of this game.