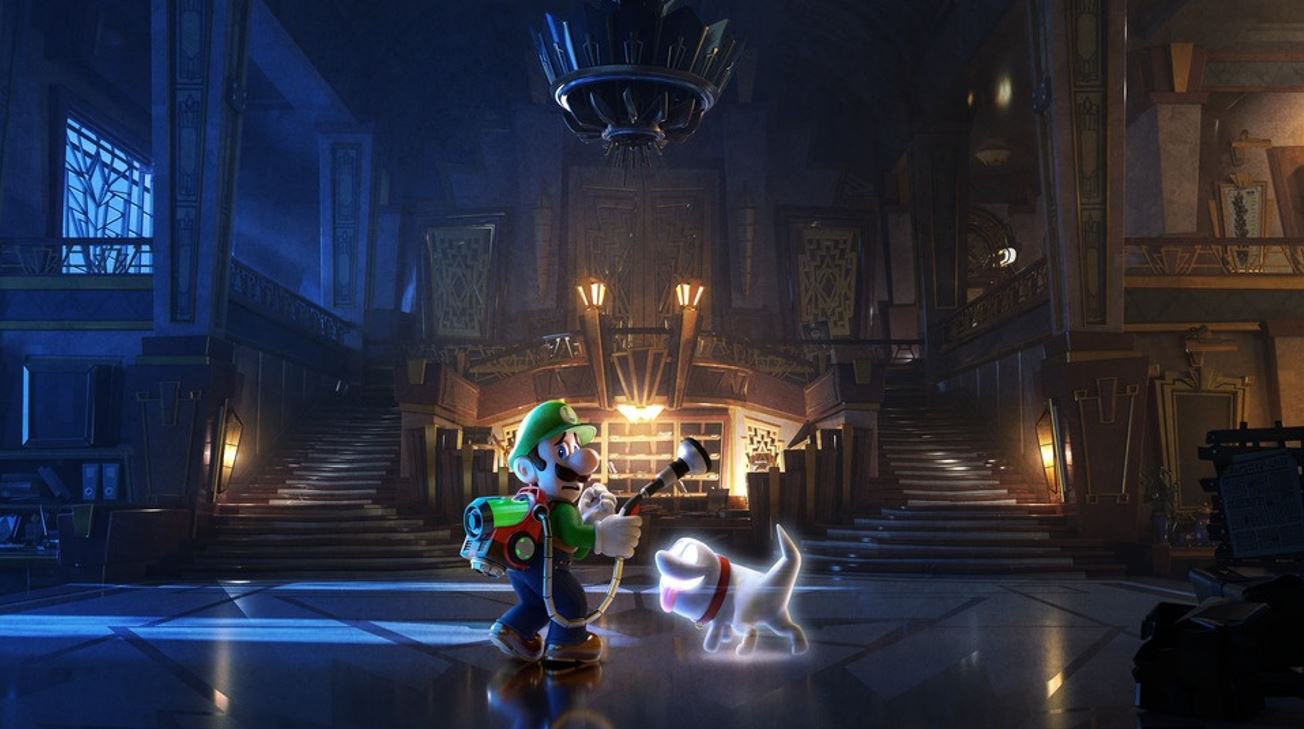 This ain’t no Holiday Inn 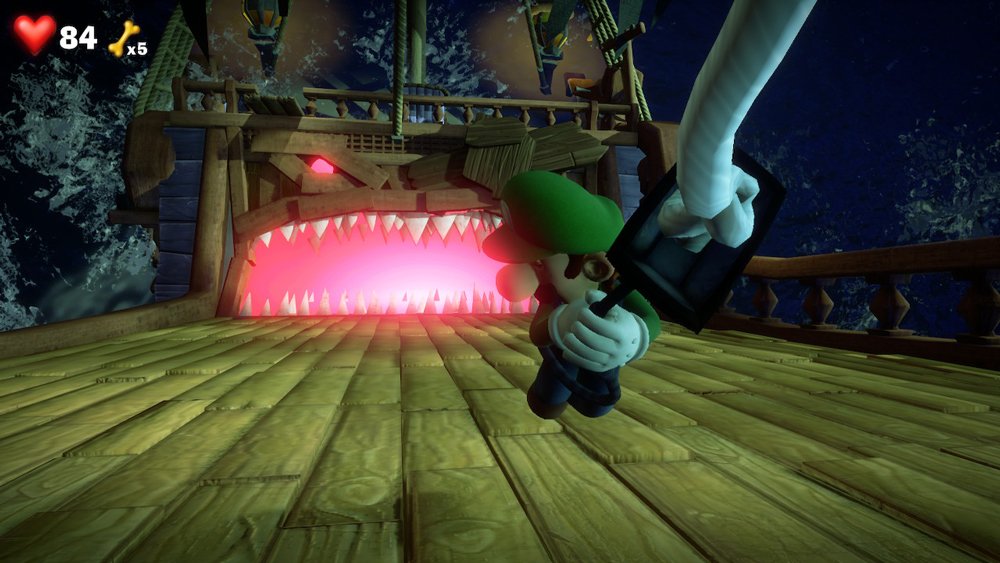 After having to trek through dirty, dingy, and dangerous mansions in his previous two outings, Luigi has earned himself a vacation. Traveling with Mario, Peach, a couple of Toads, and his beloved Polterpup, Luigi heads to the country for some rest and relaxation at The Last Resort, a massive hotel that glistens with gold and is completely free of cobwebs. Unfortunately for Luigi and the rest of his crew, this won’t be a restful vacation as it’s quickly revealed that Hellen Gravely, the proprietor of this establishment, is working with art-aficionado King Boo to once again trap his enemies in paintings. After discovering the new Poltergust G-00 and freeing a captured Professor E. Gadd, Luigi sets out to find his friends and catch any ghosts that float in his way.

Only this time, he doesn’t have to do it alone. Not long into the story, E. Gadd upgrades the G-00, giving Luigi access to Gooigi. This gives players the option of turning this single-player adventure into a couch co-op experience. You have the choice of limiting your control options by splitting the Joy-Con for co-op or the second player can join with their own controller. While the addition of Gooigi to the Luigi’s Mansion mythos makes co-op an obvious inclusion, it’s clear throughout the campaign this is designed to primarily be a single-player quest. Co-op is a welcomed addition, sure, but not what I consider to be the ideal way to experience Luigi’s Mansion 3.

Both Luigi and Gooigi have access to the same tools of the Poltergust, including the suck and blow features, the Strobulb, the dark light, the suction shot, the burst, and the slam attack. The latter three tools are new for Luigi’s Mansion 3 and are essential to defeating the different types of ghosts you’ll encounter. Some protect themselves with shields, others wear their sunglasses at night. Knowing which tool is required for the right situation will keep you from losing too much health as you find your way through this wretched resort. They’re also necessary for solving the many inventive puzzles the developers have cooked up. Most puzzles give players unlimited chances to solve them, but a choice few result in instant death if you’re unable to find the solution in time.

The layout of The Last Resort is Next Level Games’ attempt at combining the singular location of the original Luigi’s Mansion with the variety of the mini-mansions found in Dark Moon on the 3DS. While many of the floors are typical of what you’d see in a posh and luxurious hotel — a gym, a shopping center, a nightclub, etc. — a few defy logic and physics in their design and inclusion. Not only does this hotel house its own miniature desert, but in that desert is an entire pyramid complete with hidden tombs. Couple that with a pirate’s grotto, museum, movie studio, and castle, and this hotel starts to feel like one of those motels with the themed rooms, only with a much bigger design budget.

What’s nice is these massive themed areas aren’t all grouped together. The structure of this hotel keeps it varied with these extraordinary stages sandwiched between the more standard floors. Most of these locales are 100% on point in design and execution, though some I feel are better ideas on paper than in practice. The aforementioned pirate’s grotto doesn’t offer much in the way of exploration, resulting in one of the shorter floors in the game’s 15-hour campaign.

However, just because it’s over in a flash doesn’t mean it’s easy to forget. In fact, the shorter stages make up for their lack of length with brilliant puzzles and some wonderfully designed boss battles. In particular, the fights at the end of the pirate’s grotto and movie studio floors are without a doubt the most entertaining boss bouts I’ve encountered all year. The same rings true for most of the boss fights here as they either excel in their design and theatrics or in how well they test the player’s competency with the tools at Luigi’s disposal. There are a few misses, such as the ghost you fight at the end of the desert stage, but for the most part, these fights are above and beyond anything the series has seen before. 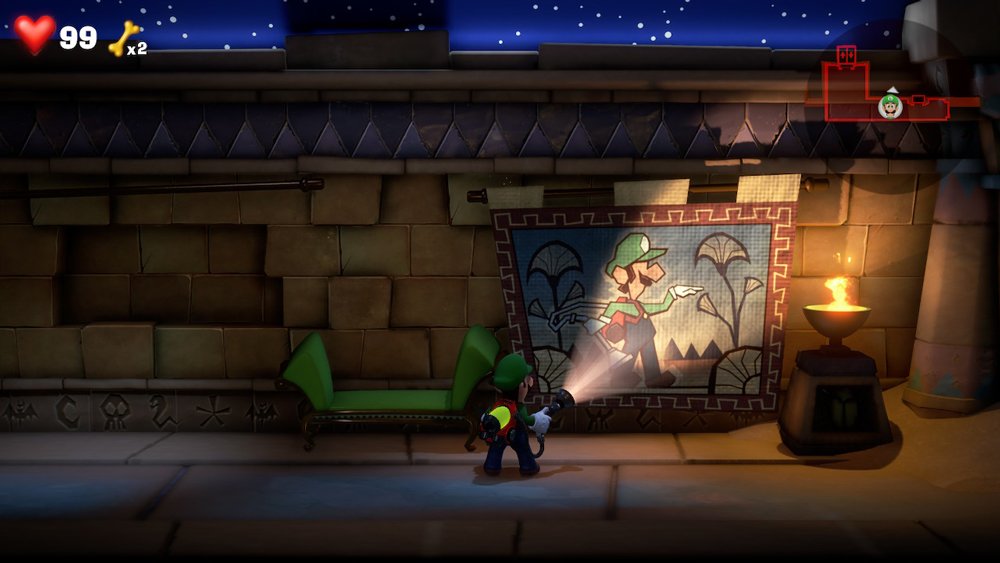 Above and beyond is actually a great way to describe most of Luigi’s Mansion 3. Nearly everything the franchise has done in the past, it does better. A giant hotel isn’t as intimate as the mansion in the GameCube original, but the amount of detail found in these haunted halls is unrivaled. From its most basic areas to its most extravagant, there isn’t a spot in this place that isn’t exceptionally decorated with bespoke lighting that gives credence to Luigi’s unease about this whole situation. Interactivity has always been a key component of the Luigi’s Mansion experience and it’s no different here. Nearly every piece of décor you encounter holds a second purpose. Some will grant you money, others are to be used in the puzzles and secrets scattered around the hotel.

The best details, however, are found in the character animations. While E. Gadd can be a bit unsettling to look at in HD, Next Level Games is putting the power of the Switch to good use with how it injects humor into the movements and facial expressions of Luigi, the Toads, Polterpup, Hellen Gravely, and every other spirit bound to this hotel. If you found the Possessors of Dark Moon lacking personality, the staff and guests of The Last Resort have it in spades.

Beyond that immaculate animation, credit must be given to long-time voice actor Charles Martinet. While Luigi still doesn’t talk in complete sentences or utter anything more complicated than a three-syllable word, Martinet’s delivery of every scream, shout, sigh, sniffle, and shriek showcases a talent that has not only confidently settled into this role but is also having an absolute gas with the variety of vocal expressions this series allows him. 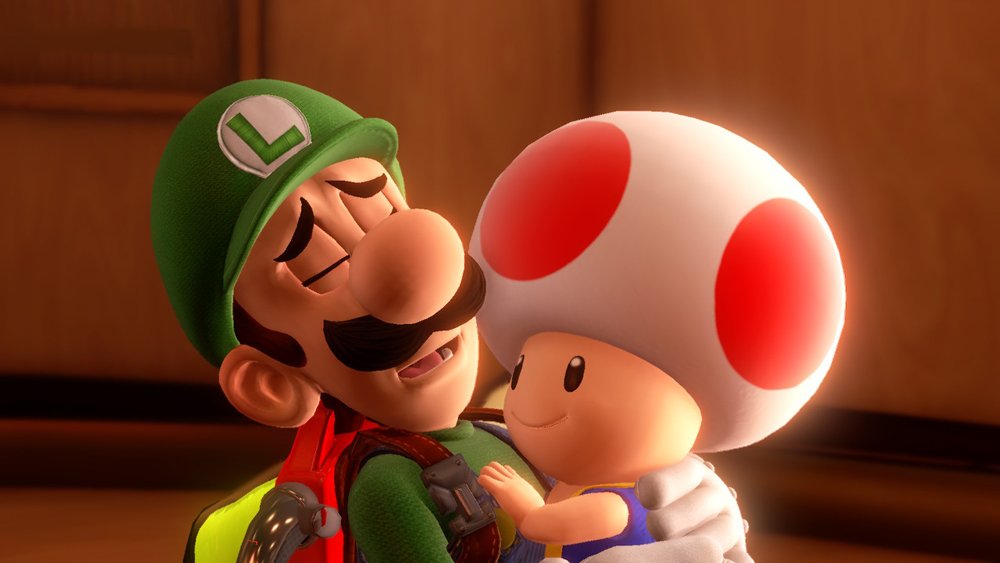 Martinet’s voice work only becomes more charming when there are four Luigis sharing the stage in the ScareScraper. Returning from Dark Moon, ScareScraper is an online multiplayer mode where up to four Luigis work together to clear randomized floors of a five- or ten-floor tower. Each floor has its own objective like catching all the ghosts or saving all the Toads and a time limit it must be completed in. In addition to those tasks, each floor houses a bevy of secrets that can reward players with money, more time on the clock, or special tools they can use on that floor.

If there is any aspect of Luigi’s Mansion 3 that pales in comparison to prior entries, it’s the lack of options in the ScareScraper. You can play locally or online in co-op or solo, but without a difficulty selector, true solo play is basically a non-starter. The mode does not adjust its challenge to how many players are attempting to complete it, so without a team of Luigis to pick up the slack, it will be difficult for people to clear a single floor by themselves, let alone an entire tower.

While ScareScraper options are more limited here than in its original incarnation, the fun factor remains near identical. Teaming up with four people online to hunt ghosts is an exhilarating experience. Without voice chat, I had to use button prompts to alert my fellow Luigis if something was wrong or I needed them to come join me. The system worked well enough if my teammates were actually paying attention. Even when we failed, and during this review period we failed in all but one instance to reach the top of the tower, I was ready to go again because of how much I was enjoying myself. 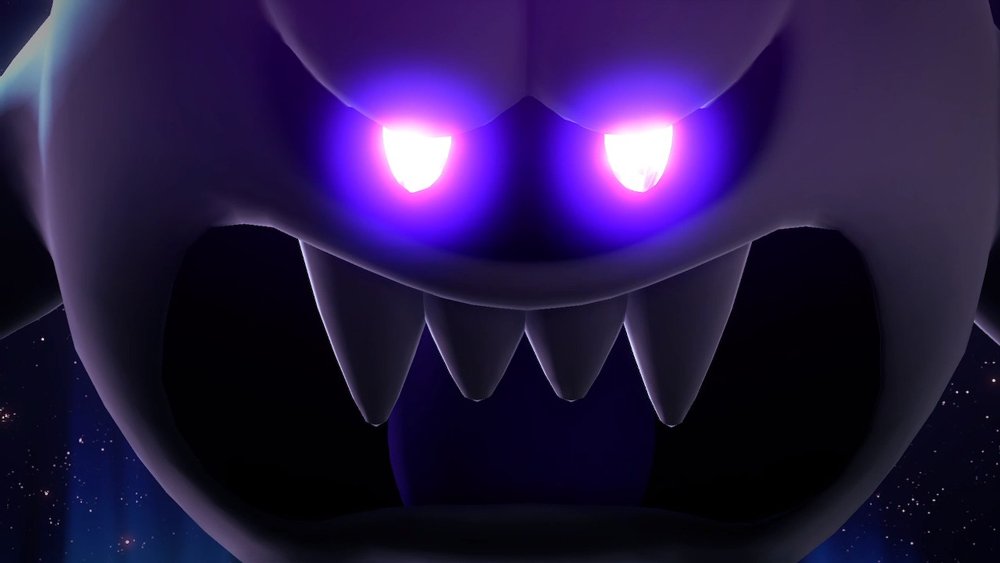 Not only is the ScareScraper the best online multiplayer experience I’ve had all year, it was also a near-flawless one as the framerate barely budged during the time I was able to test it out with three other players. The only time I distinctly remember a drop of any kind was when the four of us were in a room filled with mini ghosts and two of us had our Gooigis out. But even in that moment, the slowdown lasted only a few seconds before everything was back to being smooth as butter, which is a great relief given Nintendo’s uneven history with online gameplay.

The big new addition to the Luigi’s Mansion series is the multiplayer ScreamPark mode, but the less said about it, the better. Unlike the ScareScraper, this mode supports up to eight players — four Luigis and four Gooigis. While this could make for an interesting party game experience, none of the included minigames are deserving of anything more than a slight glance. Coin Float is something that should only be played to prepare you for one of the more irritating boss battles in the main campaign. Cannon Barrage needs a minimum of four players to be even remotely fun. And Ghost Hunt is pretty much just a simplified version of the ScareScraper. More minigames are on the way with upcoming paid DLC, but unless bots are added, I don’t see myself visiting the ScreamPark again.

The Luigi’s Mansion franchise has come a long way since the original was criticized over its lack of content. With an absorbing single-player campaign and a Scarescraper that still packs a punch, Luigi’s Mansion 3 is the most content-rich entry in the series, and one of the best times I’ve had with my Switch in 2019.