Lucky’s Tale was always going to be a tough sell. It’s a bundled-in Oculus Rift launch game, which is often used as a tech demo for prospective buyers — so to a lot of people, it probably looks like something that isn’t a system seller.

And those people are probably right, but I had a damn good time playing it. 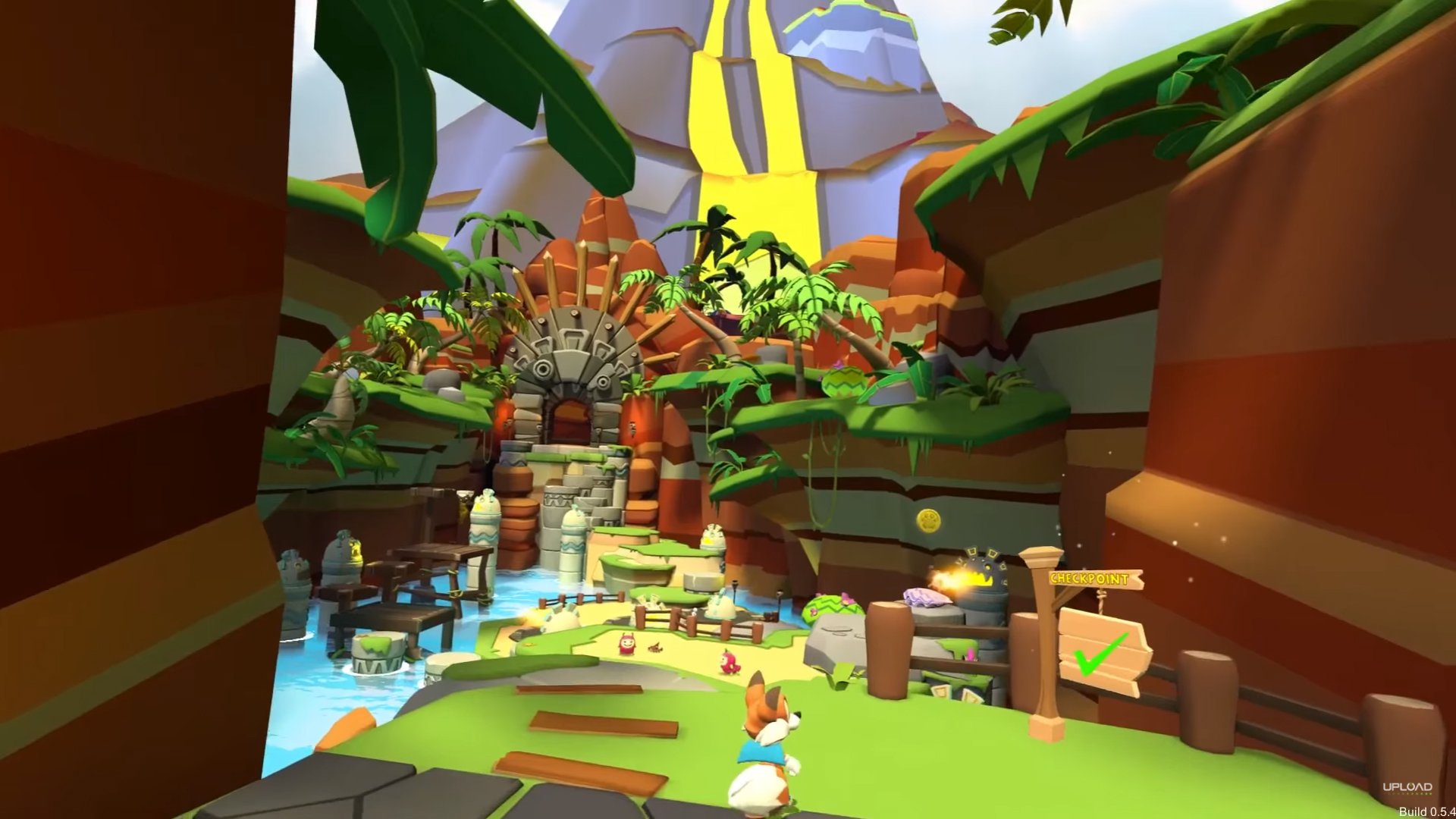 With a setup not unlike a Saturday morning cartoon, the titular Lucky is stripped off his companion Piggy by the evil Glorp, kicking off our quest. That’s basically it, with little in the way of exposition outside of a brief storybook prologue and epilogue. Whereas other games seek to build a world and fill it with memorable characters and bits of lore, Lucky is more gamey, in that regard.

But Lucky, as a mascot, with his cute blue cape and smile, works. The aesthetic reminds me heavily of Tomba or Super Mario World, all the way down to the bit where you start at your house. Playful Corp wears its Nintendo influences on its sleeve though, with coins (including a “100” 1UP goal), and even warps (holes, rather than pipes) to underground areas with a familiar tune to accompany the transition. It looks a lot better with the Rift on, of course, where you can better see the killer particle effects and other benefits of the engine. I really like the shimmering effect on hidden coins in VR, for example, as it’s much easier to literally look around, manipulating the camera at will, for secrets. It’s a neat feeling, accompanied by crisp visuals, interesting character designs, and a general positive vibe. Lucky looking at you and waving while standing still is such a Nintendo thing — I’m expecting Toad to pop out at any moment.

In case you’re wondering, yes, the VR gimmick as a whole works. The camera is pretty liberal, offering up a good view of the action at all times, sometimes panning up when ascending certain areas for added effect. I appreciate the fact that I can just tilt my head ever so slightly to look around for threats rather than move an analog stick, and it truly does add to the experience. Although Lucky can only jump, attack, and belly flop I was surprised at how deep the controls were after learning the ins and outs of the engine. For instance, the double-jump allows for more freedom than a lot of other platformers, since you get an extra jump opportunity after stomping on an enemy — allowing for some really fancy maneuvers on trickier stages.

There were a few sections of discomfort, though, mostly involving backtracking. Like a lot of other 3D mascot platformers, the camerawork isn’t perfect, and in some cases, I’d have to almost look directly down or hold my neck at an angle that wasn’t ideal to get back to a desired area. It’s not the end of the world, but it’s a clear cut indication of where VR can improve. But then again, for every occasion like that, there was an amazing section, like an uphill climb while jumping over spiked rolling logs, or a beautiful dark cave that shows off some impressive lighting effects. It’s kind of tough, too! On multiple occasions I fell to my death in the game’s many pits, and the last boss was absolutely brutal, and deserves to be up there in the pantheon of final challenges among other mascot games.

Lucky might seem like it would be light on content since it’s a free game, but there’s actually a decent chunk of stuff to do. Clocking in at roughly five hours, each stage has three objectives to complete (finish, time trial, and locate all the hidden coins), nudging players to replay levels multiple times. As an added bonus, because the Rift allows for full 360-degree head tracking, going back to levels will often lead to the discovery of completely new areas that players didn’t even notice before. Unfortunately, the multiple objective conceit was used as a form of gating, and to move on to the next chapter, you’ll need to replay any given stage two to three times over to progress. It’s…unfortunate.

I was left wanting more with Lucky’s Tale in the end. Each stage presents a fresh new idea, but those concepts are usually a half-measure, and the thrill is over in just a few scant minutes. As a VR experience though, Tale really sells the idea of 3D platformers, and I’d be very happy to play a fully-fledged sequel one day.