Not quite up to speed

That said, LBP itself may be deserving of some sympathy, considering it’s launched on the same day as Halo 4 and hasn’t had a shred of marketing weight put behind it. If you’re releasing alongside one of 2012’s biggest games, you could at least have had more than a day-of-launch trailer. As it is, many folks have been surprised the game is even out already.

If Sony was looking for a one-two punch that knocked both of its karting properties out of the race, it’s done a bang-up job.

Still, neither of them are really worth missing. Easy come, easy go. 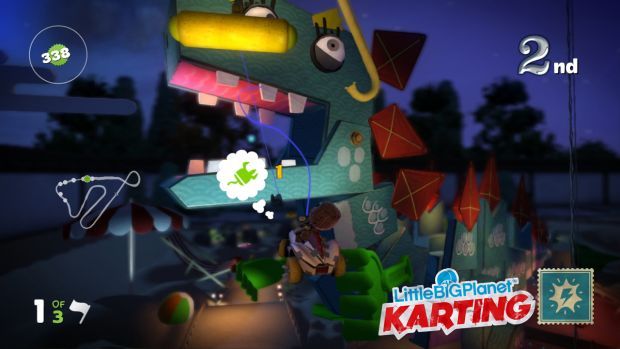 LittleBigPlanet Karting does for the kart racing genre what LittleBigPlanet did for the platforming genre, and by that I mean it does what ModNation Racers was already doing for the kart racing genre. I promise I won’t keep going on about that, but it truly boggles the mind how completely useless Sony has made either one of these two titles. It doesn’t help that LBP Karting is, more or less, exactly like the aforementioned “rival” title (likely due to United Front working on both games).

The general idea is that, like with LittleBigPlanet, players can create their own levels to share and play online. Using all manner of terrain deformation tools, pre-set objects, and customizable materials, players can craft some truly impressive tracks using the exact kind of user-friendly interface seen in mainstay LittleBigPlanet titles. This time around, instead of creating 2D platform levels, players lay out tracks built from all kinds of material by “driving” a paint roller across the ground. The roller can be raised or lowered to create tracks of varying heights, and branching routes can be added for shortcuts and hidden paths.

Most of the tools found in LittleBigPlanet transfer over quite well to the karting spin-off. Almost anything can be tweaked, from the color of the sky to the behavior of CPU-controlled racers. Speech bubbles, animated obstacles, dangerous terrain, and prizes can all be added, to the point where the only real appreciable difference between LBP and Karting is the 3D perspective. This leads for an incredibly intuitive crafting experience that, once players get to grips with the way track-building works, will have them bolting together all manner of quirky race levels in no time at all.

Unlike ModNation, there is not a huge amount of scope when it comes to making karts and racers themselves. Your Sackboy is still a pre-made doll upon which to hang costume pieces, while the karts lack the minute level of customizable details found in Sony’s earlier karting property, and fail to appear quite so personalized due to LBP‘s “improvised” aesthetic. Nevertheless, the designs are still rather charming, and unlocking new body parts for the vehicles remains a compelling little incentive.

The building aspect of LittleBigPlanet is as entertaining as usual, but the racing itself doesn’t match such levels of satisfaction. It holds its own as a fairly decent karting experience, but it chooses to stop at merely being decent, refusing to do anything new or exciting on its own and instead relying on the customization aspect as a sole draw. In a way, this is a problem shared by the regular LittleBigPlanet games — just as LittleBigPlanet is an exceptional way of crafting unremarkable platformers, so too is Karting an exceptional way of crafting unremarkable racers.

All the obligatory features are in place — karts can drift for speed boosts, perform spinning tricks in mid-air, and collect weapons to blast the competition. As with ModNation Racers, Karting goes overboard with the luck-based power-ups, using projectiles that are completely unavoidable unless you waste your own weapon to diffuse incoming attacks, and a multitude of powers that can shunt you from first to last place without skill ever being a factor. This makes it useful as a casual party game, but renders the solo story chapters more aggravating than amusing. 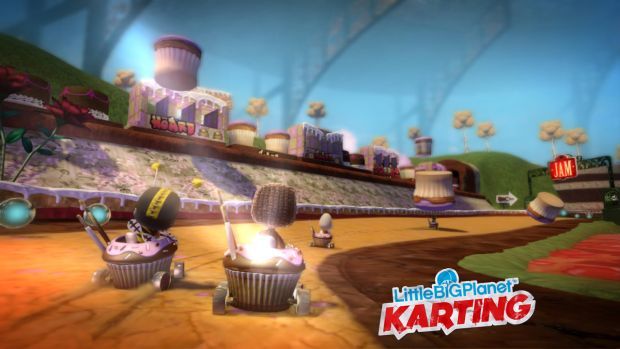 As well as straightforward races, there are Mario Kart-style battle arenas where players have to kill each other as much as possible, solo checkpoint races, and capture-and-hold objectives where players need to hold onto a specific item for as long as possible. The story mode also provides a smattering of mini-games and even boss fights, where mines or guns are used to take out weak points on huge, monstrous creations.

One thing I appreciate is how traditional elements from the series have been incorporated stylistically into the gameplay. For instance, weapon power-ups are appropriated Weaponators, and when you die, a familiar spawn point opens up on the track to get your racer back into play. The grappling hook is used to swing across wide chasms, prize bubbles can be collected to unlock new items, and many weapons are taken directly from the various obstacles found across the LBP series. Karting succeeds impressively at creating a title that feels right at home in the LittleBigPlanet universe.

Nevertheless, there’s no escaping the fact that, like so many kart racers released over the last few years, LittleBigPlanet Karting is unadventurous, traditional to a fault, and too damn slow. Yet again, it’s shameful to note that a budget title, Jimmie Johnson’s Anything with an Engine, has still done more to energize the genre than any of the more prominent titles. Make no mistake, Johnson was sorely lacking in the quality department, but at least it tried. LBP Karting is yet another racer that simply hasn’t put any effort into making kart racers exciting again. It’s solid, it’s functional, but it’s not exhilarating in any way. 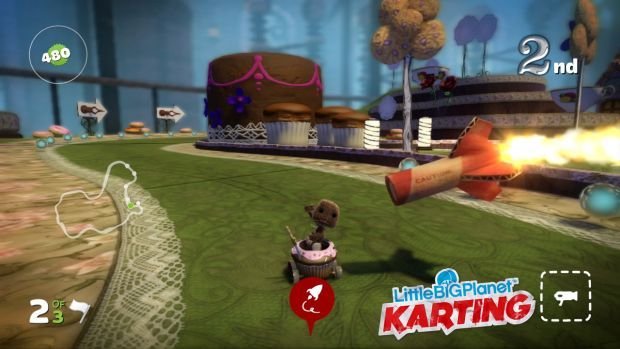 The lack of thrill is compounded by the fact that LBP‘s famously floaty physics are preserved unapologetically and used throughout the racing experience. Cars feel unwieldy and lacking in traction, and jumping is an oddly slow affair. It’s not enough to be a massive problem, but the physics are just loose enough to give the whole game a strange, waxy feeling.

Online play makes things a bit more interesting, though only marginally so. The multiplayer aspect runs smoothly, and a cool voting system offers up three stages pulled up at random for players to choose. The randomized aspect makes the next race a consistent surprise, but it can offer up poorly designed courses just as often as good ones, and can even change the controls without warning the players.

Still, the game is already filling up with user-created courses, running the gamut between insipid and inventive. Time will tell if there are enough players to keep the game ticking, but right now there seems to be a healthy batch of offerings to choose from, and folks are quickly finding ways to put a unique spin on things. One user has managed to craft a water course, complete with boats. The water physics don’t react to the boats, making the whole level look odd, but it’s a promising start. For those that do manage to find the gameplay aspect compelling, there’s a solid amount of content to check out. 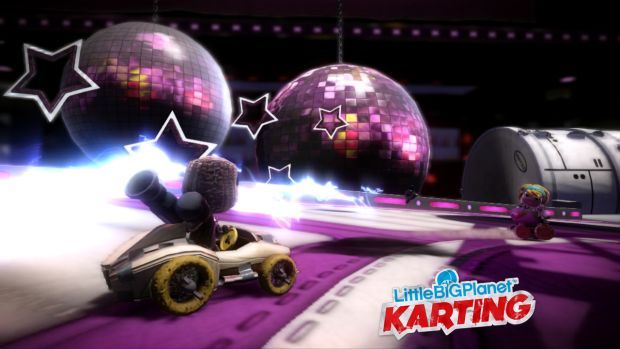 LittleBigPlanet Karting may be worth checking out for fans of the series, but experienced kart lovers can happily skip it. While the creation mode is a potentially engrossing concept, it’s not really anything that hasn’t already been done, and the racing itself is almost antediluvian in nature.

It’s not a bad game by any stretch of the imagination, and can even manage to be quite fun in the right environment, but it’s altogether a fairly meaningless release that seems to exist just to ensure Sony has something out in time for the holiday season that isn’t All-Stars.

I felt sorry for ModNation Racers when LBP Karting was released, but now I just kind of feel bad for both of them.