We first heard about Liight at PAX Prime 2009, where it was one of the PAX 10 featured independent games. Other games from that group include critical successes such as CarneyVale: Showtime, Osmos, and Machinarium. Certainly, it was in good company. After an exceptionally long time spent in development, Liight finally released with little fanfare on WiiWare last month. Did the extra development time allow Studio Walljump to create something extraordinary?

Perhaps a more fitting question would be, “did Liight deserve to be in the company of such fantastic games in the first place?” 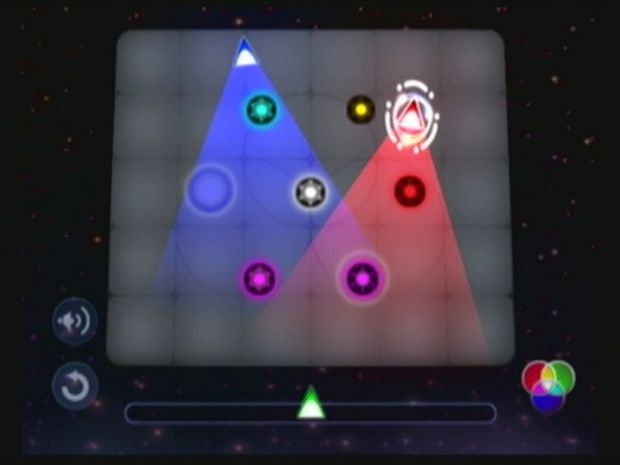 Liight‘s premise is simple, yet unique.  Essentially, there are targets of various colors scattered on the playing field, and the player is tasked with shining the appropriate color light on each target. Red lights activate red targets, green lights activate green targets, and blue lights activate blue targets, as one would expect. The player is only given access to spotlights of those three colors, so from there, Liight employs additive color theory. To activate cyan, magenta, or yellow targets, light must be combined from two of the available colors, and to activate white targets, light from all three spotlight colors must come together.

A few obstacles are presented to make puzzles more interesting. Black targets must be kept in the dark, so to speak.  The player must either avoid shining light toward these targets, or must cast a shadow on them using a second spotlight. Otherwise, the terrain features areas on which no spotlights can be placed, and areas that block light from passing through.

As targets are lit correctly, they will play one of a handful of looping electronic music samples. The idea of building a song piece by piece is a neat one, but the music present in Liight is simply too generic to care about.  While it’s not hard on the ears, it is extremely forgettable. Shining light on a black target, on the other hand, creates a loud, obnoxious static sound that drowns out the music and breaks the player’s concentration. Given that the music doesn’t particularly add to the experience, I found it worthwhile to just keep the sound effects off while playing. 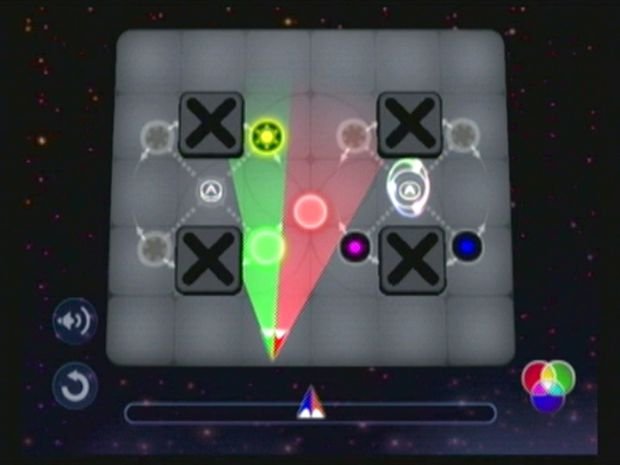 In the more advanced levels, a few new elements come into play, like movable targets and two-toned spotlights.  However, that’s as far as it goes.  Where great puzzle games (like Osmos or World of Goo) focus on one central idea and build from there, Liight begins with an interesting concept but never really expands upon it in ways that make the player change his strategy or thought process.

Where Liight really suffers is in its difficulty. While the tutorial levels are appropriately easy, and the difficulty does increase as the game progresses, it doesn’t increase well. Many of the difficult puzzles are not difficult because they are particularly clever, but because the requirements for spotlight placement and angle are too stringent. On several occasions, the difference between solving a puzzle and not was a matter of pixels or a few degrees of rotation. It is not uncommon to know the solution to a puzzle, but to still spend time adjusting the spotlights until they are in the precise locations where they need to be.

This is exacerbated by the control scheme. It uses the standard Wiimote-as-a-pointer control that works fine for menus and most other games. In Liight, however, it simply is not as precise as it needs to be for the aforementioned stringent puzzles. The bigger issue is a particular control glitch, where the cursor will sometimes select the wrong spotlight from two that are close together, even if it is clearly nearer to the desired one. This can range from being a minor nuisance (“I was going to move that spotlight next anyway”) to a controller-thrower (“I spent a minute trying to get that spotlight to precisely the position it was in and now that’s ruined”). 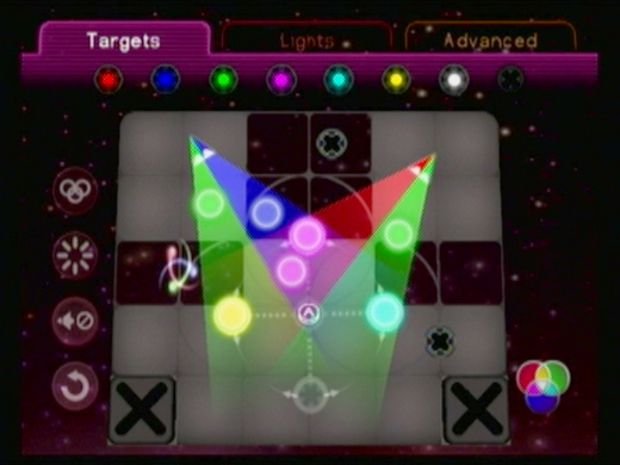 Aside from the main puzzle mode, which features 100 puzzles, Liight also allows the player to create up to 25 custom puzzles. In another welcome addition, albeit one that will rarely be used, players can share their creations with others on their Wii friend list, with no extra Friend Code necessary. (If anybody wants to check out my custom Destructoid puzzle, drop your Wii Code in the comments!)

Additionally, there is a nonstop mode that plays pretty differently than the main puzzle mode.  Rather than having unlimited time to find a fixed solution to a meticulously laid out puzzle, targets drop randomly on the playing field, and the player must shine the correct color light on them for a set period of time to remove them from play. Bonuses are awarded for efficient use of the spotlights, but too much time spent thinking will end the game. It’s a frantic alternative to the main mode, and gamers frustrated with the more difficult puzzles may enjoy its more brute force approach, but the necessity for speed and accuracy highlights the shortcomings in the control department.

In the end, Liight started with a pretty cool concept. Studio Walljump unfortunately didn’t build much upon the initial idea of utilizing additive color to light up targets. Mirrors, lasers, prisms, beam splitters, black holes, or any number of light-affecting elements could have been added to spice things up, but as it stands, what you see in the first few puzzles is what you get through the rest of the game. At only five dollars, it is a worthwhile little time waster for puzzle fans, but by no means will Liight be remembered with the same reverence as some of its peers in the 2009 PAX 10 finalists.